I work all day whipping shea, cocoa and mango butter plus I’m mom to 3 young kids. My days are spent packaging products, moving boxes, giving baths, cooking, cleaning and generally running around. As you can imagine, I live a pretty nail-decimating life. I stopped getting my nails done regularly when my oldest son was around 2 (so four years ago!) and decided to just keep them clean, short and neat. Imagine my surprise this summer when I noticed my nails growing fast and strong — the strongest they’d been in my life! It seemed to correspond to the increased butter whipping I did this summer as our sales increased.

I recently trimmed my nails back down, but I found this recent image of my nails in my phone. This is a mirror selfie I took at the nail salon about 5 days ago. I literally did nothing to get my nails to this length, and as mentioned this is despite how stressful my daily schedule is on my hands. 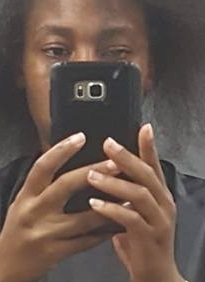 I am already really familiar with how effective whipped butter is at keeping my hands moisturized and soft, but I had no idea those benefits extended to my nails. So I did a little research and found that, yes! shea butter and coconut oil (which is contained in all our butters) are both recommended as treatments for cuticles and nails.

“Your nails and cuticles are made of the same proteins as skin, which loses moisture during cold weather, says nail expert Carolyn Siegal, DPM, a podiatrist in Beverly Hills. Not only that, you’re probably drinking less water because you’re perspiring less, your hands are more likely to be exposed to wind and cold, and your oil glands aren’t secreting as much as they do in warmer months. Then there’s that moisture-sapping activity, hand washing, a staple (or at least it should be) during cold and flu season. Siegal recommends rubbing vitamin E oil or shea butter cream into your nails and cuticles once or twice a day and before bed, and making sure to drink enough water.”

“Rubbing all natural shea butter on your cuticles and nail beds for about 20 minutes before you do any nail maintenance will nourish them and keep them strong while you buff, file, and paint. Shea butter can strengthen your nails and heal damaged beds and cuticles.”

“Freelance nail technician Loui-Marie Ebanks says that dehydration often results in flaky nails and dry cuticles. “It’s important to regularly apply cuticle oil to keep your nails nourished and hydrated… When you’re cooking with coconut or olive oil in the kitchen don’t forget to rub some into your cuticles – it’s an easy hydration hit.”

So be sure to rub your hands and nails with our butters for increased growth and strength. And at that to the long list of things our whipped butters can do!

Related articles (click the title to be taken to the full article)
24 Customers Explain How BGLH Marketplace Butters Work Wonders For Their Hair
21 Times BGLH Marketplace Butters Healed Eczema and Psoriasis, According to Our Customers
7 Ways to Use Whipped Shea, Cocoa and Mango Butter You Might Not Have Thought Of
How Whipped Shea Butter & African Black Soap Relieved My Baby’s Eczema All-Naturally