*Update: The title of this article has been updated to reflect that it is a joint effort between Black and Asian students.* 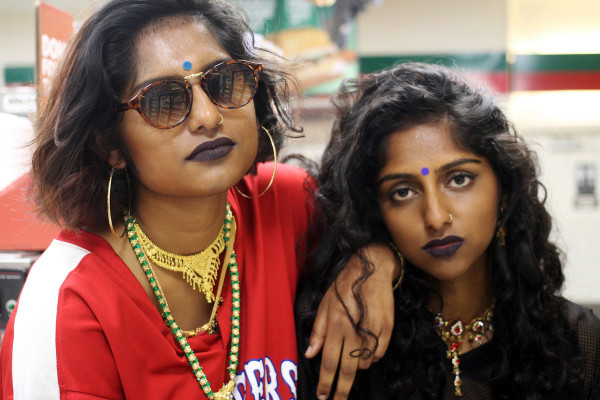 Melanin-positive social media campaigns like #IWillNotApologizeforBeingDarkSkin and #FlexinMyComplexion have resonated with black women pushing against the status quo of light skin as most beautiful. But outside the black community, the struggle to celebrate and accept darker skin tones is also prevalent. Just this year post about a Thai skin lightening ad that featured a model in blackface and blatantly stated “you need to be white to win.”

Enter three University of Texas Students:  Yogarajah sisters, Mirusha and Yanusha, whose parents hail from Sri Lanka, and Pax Jones who is black. Jones photographed the sisters for a photo series focused on colorism and, as the three talked, the #unfairandlovely tag was born.

In an interview with the Global Post, the Yogarajah sisters discussed the project’s inception:

“Pax asked us [to take part] after noticing that even many of the advocates/activists addressing racism in the black community who had a large following had light skin,” Yogarajah said. “We discussed it, and I noticed the same thing in the South Asian community — activists and advocates with a large audience against racism, sexism, fatphobia, etc., usually were lighter skinned. So this photo shoot occurred, and then we created a hashtag.”

Not long after Jones’ photos shoot of the Yogarajah sisters went viral, people began posting their own selfies under the #UnfairandLovely tag.

when people pick on girls w/darker skin but fail to realize our glo provides light for this society #UNFAIRANDLOVELY pic.twitter.com/5U6qgUwu56

#UNFAIRANDLOVELY cause for years of being called burnt I rather be that than uncooked at all 🇱🇰 pic.twitter.com/E8gZqinA3E

Some just shared their stories:

Jones, later expounded upon the idea behind the #UnfairandLovely project on Twitter.

The creative project that launched #unfairandlovely highlights the intersections of colorism & rejects one dimensional cultural expression.

#unfairandlovely is unapologetic & it’s not here to cater to white or light skinned tears. It’s to help heal years of painful colorism.

JackpotJoy
Reply to  Return the Stone

They are related to us but due to the anti blackness in their countries they are very mean to us. If white supremacy ended tomorrow this earth would be such a happier place!

Wow! This is beautiful!

I like that they displayed that world wide colored is an issue; often times we frame it as “black thang”.

Hope it becomes as big as Black Lives Matter campaign

I hope down the line they can also talk about anti-blackness in their communities..

I have nothing against Indians, Pakistanis, Sri Lankans, Bangladeshis etc..but you are right about their sentiments towards black people. I remember a documentary I watched a long time ago about how the Asians who are in Fiji attended workshops in order to learn to have better relations with the natives.

Most of them aren’t even dark. That coupled with the disgusting anti blackness in their communities, I can’t take this seriously.