Colorism is Global: Thai Skin-Lightening Ad Uses Blackface, Says You “Need to Be White to Win”

As we wrestle with colorism in the black community we can forget that it is a near-global phenomenon thanks to the ongoing effects of slavery and colonialism. A jarring ad for Snowz skin-whitening pills is a sobering reminder of that. It features 35-year-old Thai actress Cirin “Cris” Horwang wearing blackface against voiceover saying you “need to be white to win.”

The actress explains how she uses the skin-whitening pills to keep her ahead of the competition, and that if she stops she’ll become a “dusky star” competing with younger actresses who are trying to steal her shine. The blackfaced Horwang is a representation of what she’ll look like if she stops “taking care of herself” via the skin-whitening pills. (Translation courtesy of CNN.) 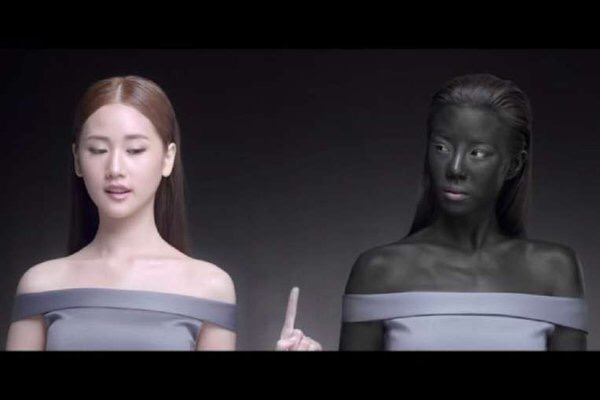 It didn’t take long before the ad, produced by company Seoul Secret, was plastered all over social media. The company tried to apologize in a rambling statement on Friday.

“Seoul Secret would like to apologise for the mistake, and claim full responsibility for this incident. Our company did not have any intention to convey discriminatory or racist messages.” 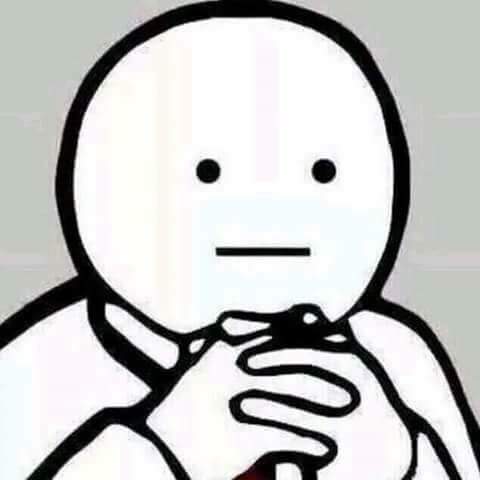 But you did tho…

“What we intended to convey was that self-improvement, in terms of personality, appearance, skills, and professionality, is crucial.” 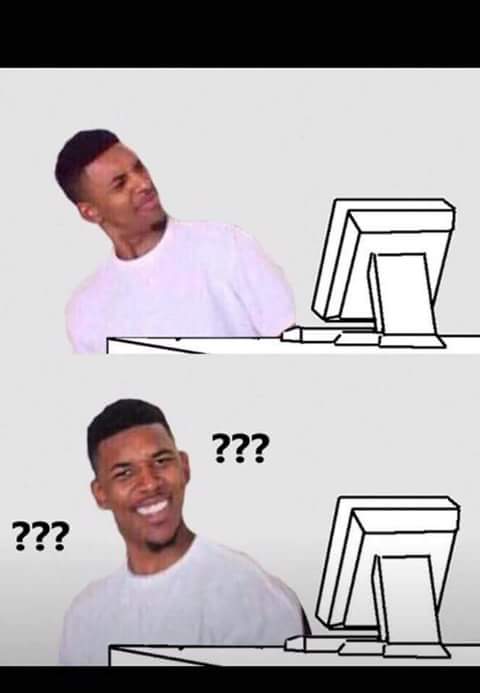 As you can imagine, Twitter wasn’t here for the apology and many were surprised that these kinds of ads are still being produced in Thailand. 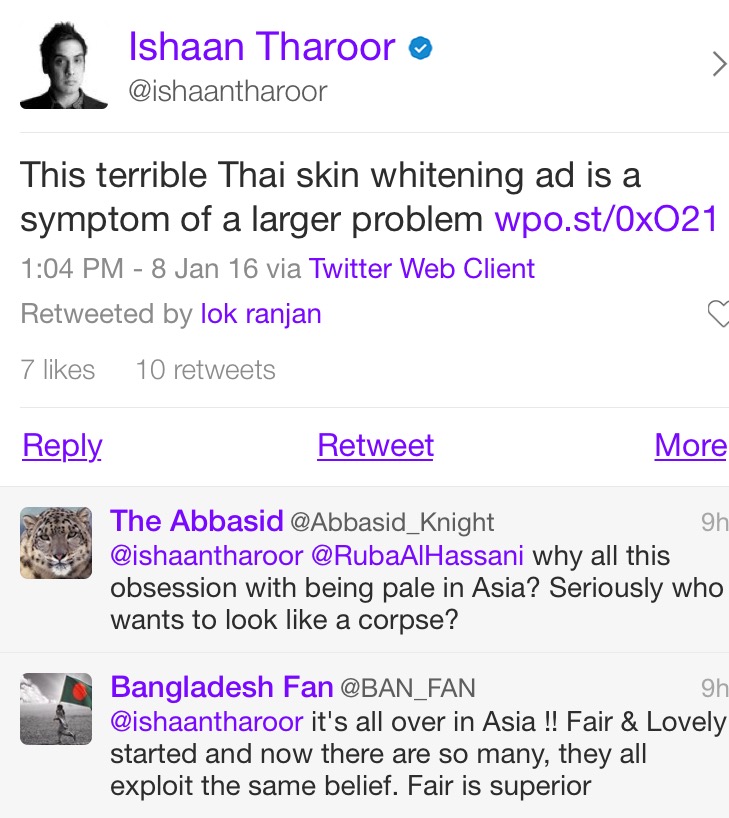 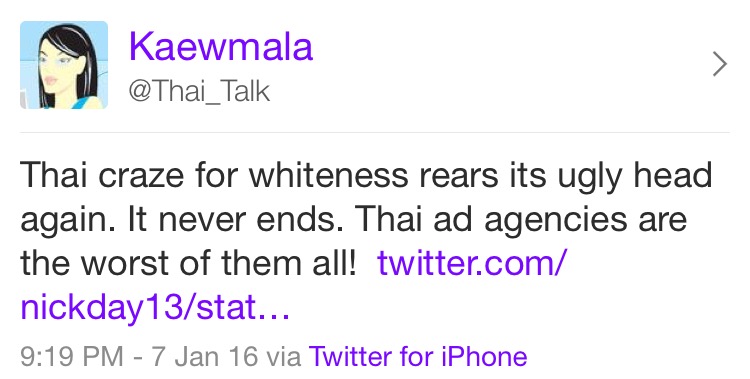 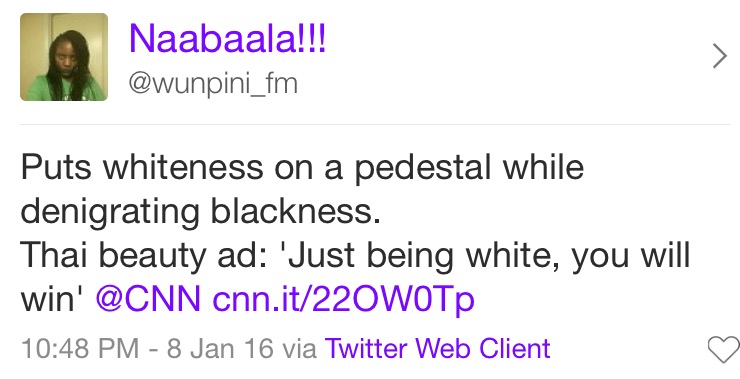 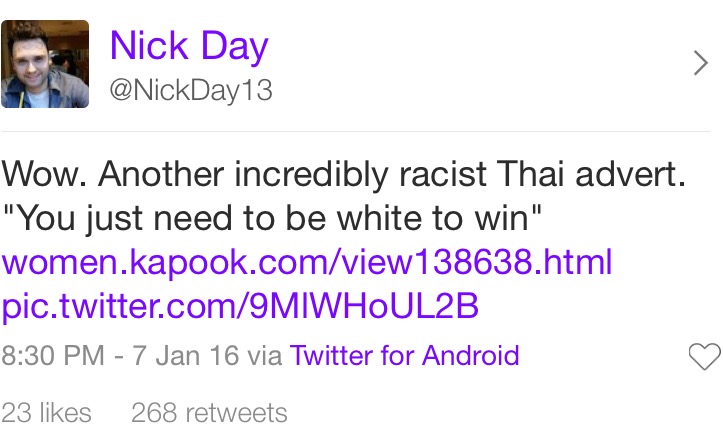 The ad has been viewed over 100,000 times on YouTube, but has since been pulled down by the company.

Thailand is a country in SouthEast Asia whose citizens come in many shades. 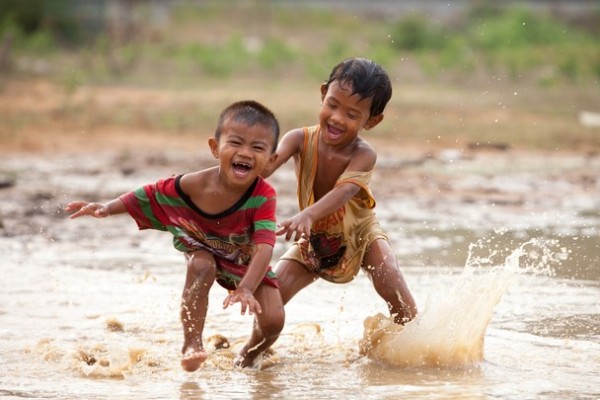 But although darker skin is prevalent, it is seen as undesirable.

Darker skin is often associated in Thailand with manual, outdoor labour, and therefore with being “lower class”.
Also much of the urban elite are of ethnic Chinese origin, who tend to have lighter skin than the indigenous people of the Thai countryside.

Seoul is in Korea, not Thailand.

Yes, that’s true (and as far as i can tell nothing in the article says otherwise). The company that makes the skin lightening cream is a Thai brand called Seoul Secret (I think the name is intended to trade on perceptions of Korea as a benchmark for beauty advances—and pale skin—in Asia) and the ad aired in Thailand starring a Thai actress.

melanin is important so i rather have melanin than don’t have it. dark skin is more natural…

and has more collagen meaning it ages better

I totally agree! I’m in my 40s and because I am darker, people think I am much, much younger. Let them keep their backwards mindset. Thank God for your melanin! When you get older, you’ll be prettier and younger looking than everyone else. Trust me! lol

It is so hypocritical that the ads positioned at the bottom of this article promote skin lightening.

🙁 It’s an Amazon app that shows sale items based on key words in the article text. I will look into blocking ‘skin bleaching’ as a key word. We’re all about the melanin over here…

That’s sad, white supremacy is every where. Even in the white community. Brunettes wanna be blonde, get eyes contacts, it’s sad. At least I’m not that way. I find darker skinned people more attractive then paler skinned people. Just a preference

And yet how many Asians are brown-skinned ? Thai, Phillipino etc! Almost all local beauty supply stores are selling skin bleach products and Black people, etc are buying it up! Stop giving your cash away to change your skin color, learn to love yourself!

It’s just sad.. but i dont give a f**k! If they want to do that with themselves, then too bad. It’s their problem if their mindsets are jacked up. I’m done with this issue 🙂

Ahhhh…more from the color-struck beige people of the world. I tend not to concern myself with their worship of the light, bright, thin, and straight in my beautiful chocolate world. Let them bleach, relax, and flat iron themselves to death if that’s what they want. I don’t deal with people of such mindsets.

But why did the actress highkey look better dark as charcoal than white? I’m mad at the blackface but she looked prettier darker.

Psychologically this girl is destroyed. She like so many pale supremists have not changed the world for the better they have decided to destroy what makes us naturally hue-man. Think about how ignorant these people are they are trying to hold us accountable for NATURE! In their sick minds somehow nature got it wrong. The problem with most of these type is they refuse to understand science our skin is melanated(dark or brown) too protect us from the suns harmful rays, our hair is thick to protect our scalp from the suns rays as well. Black people were created to live… Read more »

What a shame. Thailand is a beautiful country with beautiful people. They should love the skin they’re in

Other non-black POCs are the worst when it comes to colorism. It’s like they are in denial of being NOT WHITE, especially in America. If a certain politician wins the republican primary and the presidency (y’all know who I am talking about), guess what? Those same white-washed POCs will get the loudest wake-up call not seen since the 1930s Germany. Yeah, I went there.

Please, they knew exactly message they wanted to convey, they just didn’t expect the blacklash.

Wow, everyone in America is tanning and lightening to meet some universal culturally ambiguous shade “as a sign of health, fitness, and financial security”, and these guys are trying to be white enough to glow at night. Humanity is really something. (Casts major side eye)

The “white skin means better” is very much European influence. This just comes to show how much the white ideology of beauty has very much come to colonize not only people in America but plays an effective role all around the world.

I had to laugh. We have to sort out our own history in THIS country and understand ourselves before we can get concerned about anyone else. The terrible part is some use this to point out our struggle is no big deal. But colorism is this country has wide-reaching effects. Dark skinned girls get more jail time. ?