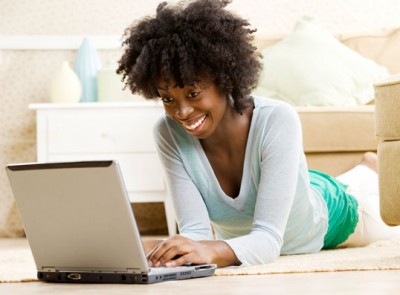 America is obsessed with the concept of black women’s unloveability. Head over to Google news and type in “black women” and “marriage” and you’ll be hit with a barrage of over-analysis on why no one wants us for marriage, in online dating, anywhere — and this fascination is strange seeing that black women are a mere 6% of the American population. MadameNoire writer Christine Mwaturura came up with the ingenious plan of changing her race on a dating site to see exactly what life is like on the other side.

I created Online Stephanie to see if the grass is greener on the other side of the racial divide. Stephanie is an unassuming looking, moderately attractive white woman with dark brown hair and a warm smile. Her personality and hobbies are exactly identical to mine: she listens to Beyoncé, practices yoga and is a self-described health enthusiast. She’s looking for the same type of guy as me: at least 5’9”, athletic build, college educated with no kids.

So according to the “common knowledge” that black women are virtually ignored on dating sites, Mwtururua should have been flooded with a barrage of eligible bachelors and marriage proposals, right? Um… actually no. This was her tally at the end of the week.

Number of Profile Views
Stephanie got 27 views in one week. I got about 34 views per week.

Low-Grade Interactions Received (e.g. winks, photo likes, and favorites)
Stephanie received more interactions than I did on a per week basis.

Quality of Emails
Stephanie’s in-mail messages were generally crafted better. Men would actually take the time to write an entire personalized paragraph to introduce themselves, whereas a good portion of my in-mail was incoherent gibberish like: “How you are beautiful eyes and your beauty beloved charming you the most beautiful angel.” Say what?

And while Stephanie’s outcomes were better than Mwtururua’s, at the end of the day none of the new prospects were good candidates for her.

When comparing both online dating experiences, the most curious thing that came out of it for me was that even though my number of per week profile views beat out Stephanie’s, this did not translate into more interactions. It seems like men are happy to look at a Black woman but won’t initiate flirting. On the flipside, men are spurred into action when presented with a non-Black face… As a whole, Stephanie’s online dating experience felt better than mine, but only marginally so. At the end of it all, of the men who had initiated some form of interaction, there wasn’t a single guy whom I would have picked for a date. Stephanie would have ended up watching Netflix alone on a Friday night, just like me. So yes, even though there is a pervasive discount applied against Black women online, maybe the result of it doesn’t matter all that much in real terms. Online dating sucks… for everyone.

Read the full story here. Ladies, what are your thoughts?

These results are surprising at all…

Wow that’s funny considering I met my guy online and he is actually white.Still not suprised

your hair has flourished!!! love the color too…did you pose for a stock photo shoot?

Yes, there are some men (black included) who will pass us up. But who cares about them?! I’d encourage any woman who pursues online dating to really take time and craft a genuine and honest profile. Let it show your personality! The right man will come…and bonus–you’ll know he can read. haha

I honestly do NOT believe in the whole “unlovable black woman” thing on no one wanting to marry black women. I’ve said for years its not true. I have an eharmony profile and on my profile I made it clear that I exclusively date black men. I get a lot of profile views and messages when I’m actually on eharmony. If you have not logged onto eharmony in awhile it shows this. I don’t mind online dating I just have to get up the nerve to actually commit to go out on a date with someone I’m speaking to online.… Read more »

Interesting! I use a few online dating sites and I am a darker-skinned black woman. I get between 2–7 messages a day depending on the site, all races of men contact me. However, I’d say mostly Black & Spanish men contact me, and when other races contact me they tend to be thinking sex first. Asians rarely ever contact me. Surprisingly, Middle Easterns do. But with all other races (except Spanish) I feel as if they look at me like I’m some sort of exotic animal to be had, and white men in particular come off as if they are… Read more »

I feel like more factors and variables need to be considered. I think if you are under 30 are skinny, very light-skinned and or look like Beyoncé white men will be interested in you. If you live on a bad side of town and have a lower financial status you can forget about meeting a quality white man except for sex not marriage. Black men are generally looking for other races that are not interested in them.

From the results I’m willing to bet she chose a white chick that looked Latina or was a lightskinned black woman she deemed white. She should run the experiment with a skinny blonde under the age of 25 that’s who gets the most attention. I did once and the mailbox was gushing like a geyser. On top of that the men would offer gifts like crazy but I suspected it was a way to gain her home address.

That’s a picture of me from YEARS ago!!! But the article isn’t about me, lol 🙂

We thought it was a stock photo!! Oh no!

Eh. I’m lukewarm on this. Wasn’t the study (or studies, I can’t recall) that claimed Black women were the least desired in online dating also claiming that Asian women–not white women were most desired. With Latina ( White or Mestizo, not Afrolatina of course) women coming in second and White women falling somewhere after them. With those stats in mind, these results are not all that surprising.

But it was an interesting experiment nonetheless. I wouldn’t take it too seriously though.

Oh I remember it was stats taken from the OkCupid site

It depends on the site, your age, your city, there are far too many variables. I’ve joined many sites, I’m 25 and the best results I’ve had is on interracialdating.com
I was initially looking for a site based on my religion and found this site kept me busy answering to many messages. Not saying it isn’t true. I just feel like it needs to be tested more. I know too many of my friends who have had many positive experiences through online dating.

Specific exclusion of race in a dating profile? I’m both offended and thankful.

I wonder what site she used because I have done the same experiment on popular sites including apps and whether I fill in the profile or not men are really thirsty for white women black men included. Posing as a white woman I received all types of messages and was in shock that a lot of men are willing to do anything and everything for a complete stranger who they never met let alone even had an initial conversation with and as a black woman I don’t receive as much attention or the same type of attention online. I will… Read more »

[…] a Black woman the first thing she asks is how many kids do I have and how many babymamas? With other races I don’t have to worry about those questions.” “Black women don’t want to date me because […]

[…] or academic scholar to notice the tide in America has shifted. Whether you want to talk about the abysmal dating scene for educated women of color in major metropolitan areas, the difficulty in finding a job that does not suck your soul out […]

Expat Me | Featured Content on Internationality | The Globalcreating Community

[…] or an academic scholar to notice the tide in America has shifted. Whether you want to talk about the abysmal dating scene for educated women of color in major metropolitan areas, the difficulty in finding a job that does not suck your soul out […]

Expat Me | Spotlight on Internationality

[…] or an academic scholar to notice the tide in America has shifted. Whether you want to talk about the abysmal dating scene for educated women of color in major metropolitan areas, the difficulty in finding a job that does not suck your soul out […]

Ugh, not this subject again. I really believe that this whole dating scene and social life isn’t really suited for Black women in America. I find it racist, sexist, toxic and all around overbearing hurdles to overcome to even be seen and treated like a woman and human being. I am often called ugly by Black American men because I don’t have the light skin exotical look they like. White American men and non Black men of other nationalities do pay attention to me more but it is often fetishizing than actual appreciation. I find myself more appreciated and respected… Read more »