Yesterday, singer, Christina Milian posted a photo of herself, along with her 5‑year-old daughter, Violet meeting Zendaya at the Inaugural World Aids Day benefit on her instagram page. 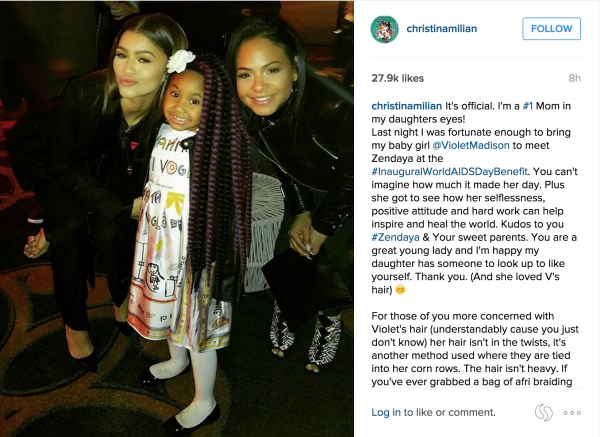 As cute as the photo was, many folks on instagram questioned if her daughter’s hairstyle, long marley twists wer comfortable and appropriate for someone her age:

tiffaniwebb1 The hair looks like a costume. The poor child looks like she’s wearing a long 30″ multicolored mop. It’s too grown and odd looking for such a small child. Hair is damn near taller than her. #tryagain#writeanothersongifyourbored

_goldenarches_ But she’s a child why does she have an adult hairstyle? Maybe if they were smaller & shorter but geesh. Baby gone have all kinds of neck problems poor thing.

fabulous_ladya I think that’s too much for a little girl. She needs to look her age.

alleyezonque It wouldnt be so bad if they werent so damn long. A child needs to look like a child

goldfinga28 I’ve only had half done with these crochet twist and Mohawk and the whole thing was heavy ??the top of my head was sore

honeydavon Those crotchets braids are heavy I install them all the time on adult heads the hair is not heavy if you pick one up but when it’s all in its heavy. I only commented cause I know for a fact baby girl neck is hurting lol

d__nicola I understand that the hair is crocheted but the length is way to long for her age. That same hair comes in a shorter length which would look much more appropriate. My daughter is 10 with the same hair style just short. Her hair is almost as long as her body ?

Milian later updater her post with details on how the style was achieved for all concerned parties:

For those of you more concerned with Violet’s hair (understandably cause you just don’t know) her hair isn’t in the twists, it’s another method used where they are tied into her corn rows. The hair isn’t heavy. If you’ve ever grabbed a bag of afri braiding hair you know they are very light weight. But just trying new things. Violet likes it and it’s not damaging. Xo

Not too long ago, we picked up on the viral photo of an even younger toddler with a heavy faux loc extension style and the verdict was split, some felt such a style seemed to heavy to bear for younger children and some felt the style was okay given the length.

However, Milian’s daughter’s hairstyle is a lot longer and what we’d describe as mid-thigh length. The length and the presumed weight of the marley or “afri” hair used seems to rest at the heart of the concern for many.

Sound off! Do you think the criticism is fair?

People are just trying to pick the child apart because they might not like the mother. I’ve seen young baby girls grow hair this long. All Christina did was have crochet braids installed what’s the big deal?

Celebs can’t do anything right in the public’s eye but she is her parent. She can do whatever she wants with her daughter’s hair. If I had children and I took care of them and did they hair and someone came for me and my baby, blocked and deleted, ignored if I’m just so insta-famous. This trend of telling parents what do to with their kids is getting a little cray cray and weird. You don’t have to agree with the style or her parenting. But the child doesn’t have to be talked about.

If Christina doesn’t want her daughter discussed, then she should refrain from posting pics of her on social media or make her account private. No one was talking about her daughter until that picture surfaced.

I don’t think it matters how long the extensions are, so much as how tight the braids are at the root. You can pull your own hair out that way over time without ever having put any extensions in. There are little girls walking around with hair that long without naturally and they aren’t in pain.

No synthetic is heavy. It’s not good for hair

The length does matter. Big fat long braids like those naturally carry weight, unless she used cotton candy to do it, it is not weightless.

Though the hairstyle would be a bit much for a kid, its not really necessary to start backlash over it and not get in your emotions…

its a nice hairstyle but it looks to long for the child. she needs to cut it and make it more age appropriate for her

So if you guys saw a little girl like her walking down the street with hair like that you wouldn’t think anything’s wrong? It has nothing to do with picking a celeb apart. I’m not questioning her parenting skills. I’m saying that that hairstyle is a bit too much for a little girl, but hey, that’s just my opinion,

Christina milian always came off to me as bit ditzy.

What she does to her child’s hair is no one’s business and does not need input from the public.

Since she is the one who opted to make herself a public figure, the public has ALL right to comment on anything that she does that they see it fit to comment on. If she doesnt want the public to comment then she can keep herself and her daughter out of the limelight. None of which she will do I’m sure. so in the meantime, she will have to put up with public comments.

I see my comment wasn’t approved…funny BGLH. Let’s try this again: just because the mother is a public figure, doesn’t give anyone the right to critize her child. How about you mind your business and concern yourself with that matter that specifically pertains to your children and not when Ms. Christian is doing with her child’s hair 🙂

ppl need to stop policing other ppl’s parenting, period! who are u to say that her daughter’s hair isn’t age appropriate?! perhaps on ur 5yr old, it’s not but the next parent may disagree. i don’t allow my 13yr old to wear lipstick, but her friends do. i certainly don’t go around telling their parents that it’s not age appropriate. it’s funny how i’ve seen ppl complain about the crochet twists being so heavy, NOW. because before this ppl swear that they’re so light.

I know those twist hurt because she is doing what I do when they heavy. Push on her toes. Lol Her little stockings so dirty from pushing on her feet and falling over when patting the top of her head. My neck is hurting for her. And her answer! “Her hair not in them tied on” and ” if we ever grabbed a bag we know they light weight” smh “a bag” it took more then “a bag” to make those jumbo ropes. I don’t know this celeb, but even an alien from outer space know they heavy. And if truth was told… Read more »

Her daughter is such a cutie.

I had box braids growing up which were braided into my hair. Adults and children where them, and my hair and scalp was fine. I feel like the people critzing the most never put the style into their own child’s head, or just too tender-headed. I’d rather see Christina do something with her child’s head than just let it go wild. Itshows that she does care about her child’s hair and at least she’s not dyeing, frying and laying it to the side!

THOSE are not box braids. And were your braids mid-thigh length @age 5?

Yes they were mid-thigh length and my hair and scalp ended up fine. I enjoyed those braids because it made me feel like I had long hair. Can you remember that long ago as a young girl and you wanted long pretty hair just like your dolls and/or the girls on tv? You are doing nothing but spreading negativity and to be honest what constitutes an “adult” hairstyle? Because of length? So women with short hair must be trying to be a little girl again. You make no sense. I personally believe its kinda weird that adults put age limits… Read more »

Since when does hair length determine if something is “adult” or not? Since when do hair choices determine someone’s fitness in being a good, overall, parent? She didn’t dress her up as a little prostitute, my goodness. It is a lot of hair but I don’t see anything “adult” about the hairstyle- it’s just really long.

i say if the little girl wants her hair like that and her mom is giving her the room to experiment with her hair it’s their choice and i find nothing wrong with that. if the kid feels as though they are too heavy for her she can always take them out it’s not the end of the world. as a mom if my little girl wants to go crazy with her hair then that’s fine it’s just hair and most importantly it’s her hair and it’s her child.

the hidden danger of children having children, this cute little girl is going to have neck trouble with all of that heavy fake hair on her head. Sad nothing to rave about!

Christina should teach her daughter to love herself and her natural hair. Getting her to modify her looks so dramatically at such a young age will stop her from ever being comfortable in her own skin. I find it really depressing. She could really take the time to learn about the best ways to help her gorgeous young daughter maintain healthy beautiful hair, instead of sticking an awful wig on her. How is she supposed to play, swim or be a kid with a gigantic weave on her head?I’m sure Christina is s kind loving mother, but this is so… Read more »

But the public (aka people that needs to mind their own business) don’t need to comment on a child. What’s so hard about keeping one’s own two cents?

A child’s hair is the responsibility of the mothers and its pretty much almost all opinion. If its damaging…which you can tell by looking whether or not it is…then of course its not okay. Other than that…I don’t see a problem. I just simply wouldn’t because it looks weird.

[…] Last year Christina Milian got a lot of flack for styling her daughter’s hair in crotchet twists. What do you think about […]

It looks disgusting. This is a child. There is no need for that. Even if youre going to put in extensions (which i am extremely against for children), make it very short and light. What is the purpose of this? Horrible. This is an adult style.