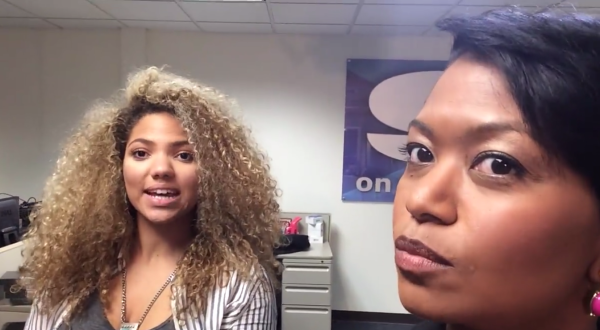 WNCT News anchor, Angela Green posted a video on her Facebook page in which she advises her 19-year-old intern, Madison to straighten her hair for an upcoming production. Madison shared the pre-production feedback which brought up the topic of her hair. Click here to see the video if it doesn’t embed below…

Natural hair or nah? Professional advice for one of our interns. Weigh in? #naturalhair #yolo #professionalism #bighairdontcare

Green then went on to explain straight hair is what she felt was most acceptable in today’s broadcast standards based own her own experience and her desire to appease her bosses.

“In the workplace, my suggestion was just to straighten out just to please everybody.”

In a world, where we’re seeing more and more news anchors reveal their natural hair a la Robin Roberts and Tamron Hall you would think that the newsroom would be quick to embrace the natural hair movement.

Now, let’s break down the critiques of natural hair being “distracting.” Distracting for who? People that don’t know what black hair looks like and are unfamiliar with it’s shape and texture? If I’m watching the news, I can’t imagine my brain going, “Wow, that’s a shame someone robbed a bank, but LOOK AT THAT ANCHOR’S TWIST-OUT!”

Part of me feels as if this way of thinking is dated. As someone, who was once told on a commercial audition to bring my hair “down,” I am ready for a wider acceptance of natural hair and not this flippant idea of it being a trend. Green, herself said it:

This is the style right now for everybody.

Statements like this play into the huge misconception which diminishes the natural hair movement as being one that rests upon what’s “fashionable” and not the overall embrace of black beauty.

Just last year after much backlash, the United States military revamped their hair regulations to include those who serve while wearing their natural hair. This past week, Sheryl Underwoord comedienne and host of the daytime talk show, The Talk apologized for publicly slamming natural hair on-air last year and even revealed her own natural hair.

By continuing to uphold this idea that natural hair is not deemed “professional,” are we making it harder for it to ever become “normal” to the masses? Will we ever see the promise land, where no one puts their hands in your hair without asking?

What are your thoughts? Do you think the ancho gave the intern the right advice?

Now is not the time to conform to racist ideals.

All right, it’s Friday, I’ve had my first glass of wine after a long week, and IDGAF: I’m gonna need stupid, brainwashed black folks to take a row of seats. Why is straightening the ONLY option for this girl? Whatever happened to pulling it back, or cutting it short? Or, hell, just leaving it alone (with a bit of a trim, maybe)? Sheee…hasn’t this chick ever heard of Alison Stewart? Yeah, she had the really big hair when she was on MTV, but even now she’s still wearing her natural curl pattern AND she works for CBS. Yeah…THAT CBS. It’s… Read more »

In direct response to this article, I styled my hair in a full blown ‘fro today and walked into work like a boss!!!

That perm must have seeped through to her brain. SMH

[…] See the full story at bglh-marketplace.com […]

Disgusting ignorant woman, the curly haired girl looks far happier than she does. She has a loose texture of hair too, which surprises me. If this news anchor worked for me, she would be fired for that sort of racial discrimination. Plenty of white people have curly hair and don’t straighten it, why do we have to? We do not.

I am not. Straightening my hair. For my job, boss, family, or church. Not happening. I know it’s just hair but that type of mind control and for me to follow their orders and advice. I’d rather do an updo like a bun or just styled elegantly like Teyonah Parris.
I understand your hair out and standing at attention…it must be so hard to look away at the crown of beauty.