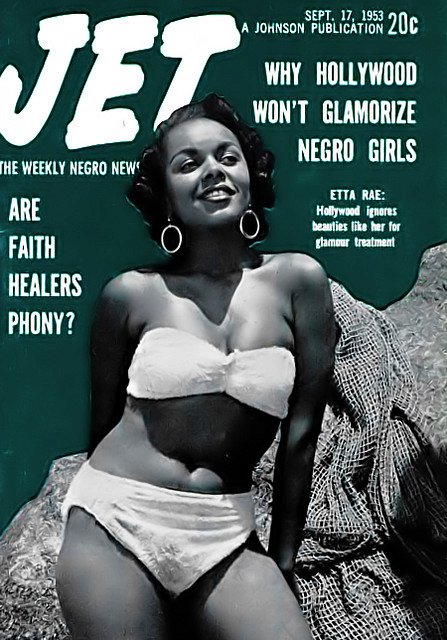 The phrase ‘pinup girl’ has become synonymous with women like Bettie Page, Betty Grable and Tempest Storm. But black women, although overlooked, were a part of the movement towards more liberal expressions of sexuality in the 20th century. But much like other branches of entertainment, the world of pinup modeling was rampant with racist beauty ideals. A well-known freelance photographer, Howard Morehead overheard a fairly prominent photographer give his own ignorant reasoning behind the lack of black models at the time: 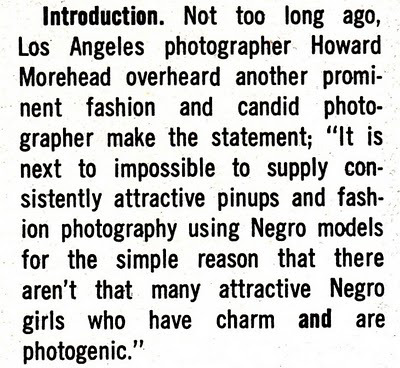 Though largely unsung, these beautiful black women were models and dancers who paved the way for modern black woman entertainers. 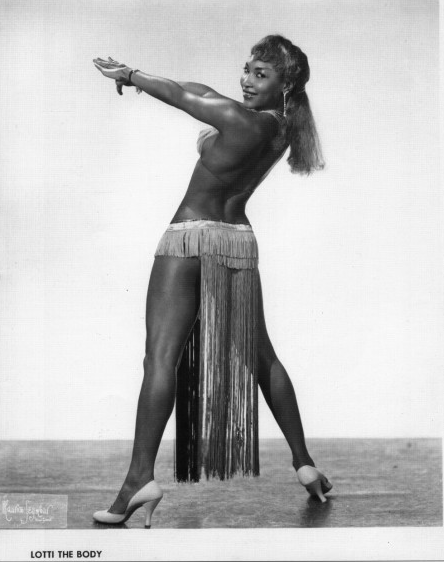 Lottie was a classically trained dancer out of Syracuse, NY. She was known for performing her craft of burlesque dancing in white clubs during the height of segregation. 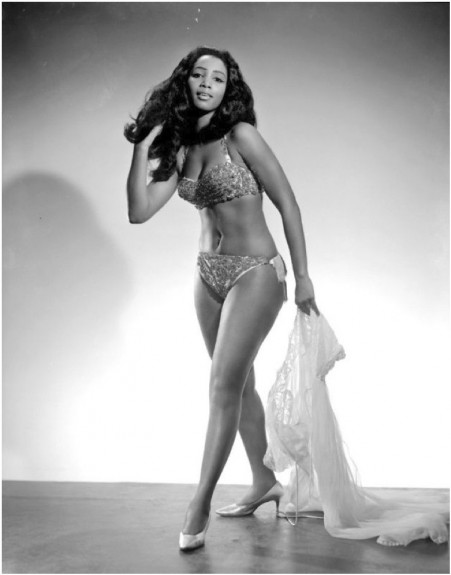 Toni Elling was a burlesque dancer out of Detroit. She is said to be the inspiration behind Duke Ellington’s Satin Doll. Elling entered the world of burlesque in 1960 at the age of 32, which at the time would’ve been fairly late in the game. Despite age, Elling’s career lasted of more than a decade and she still performs today. 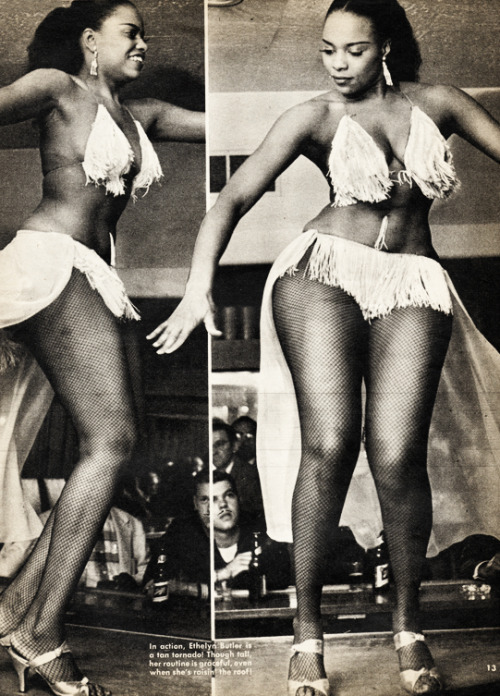 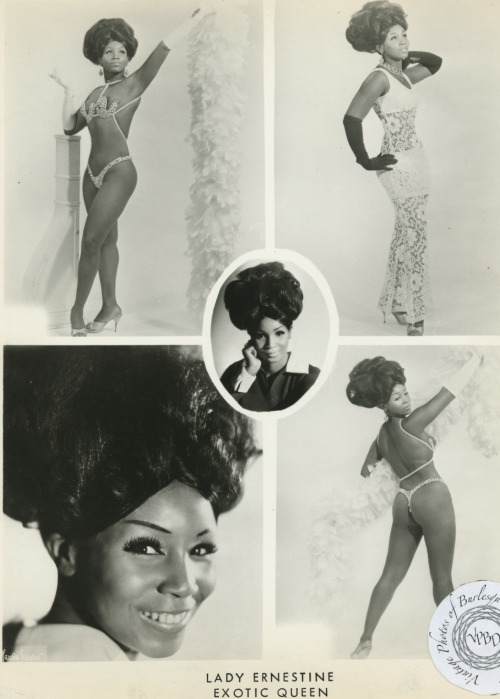 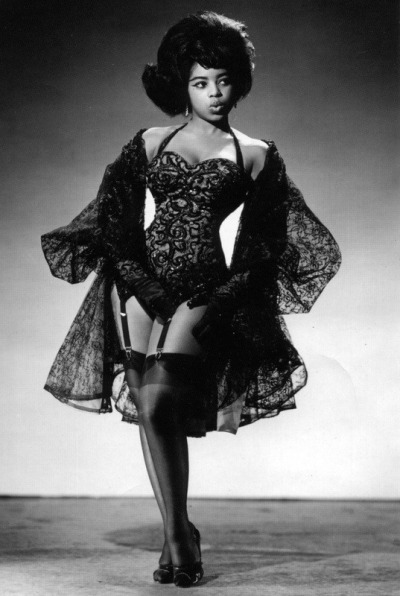 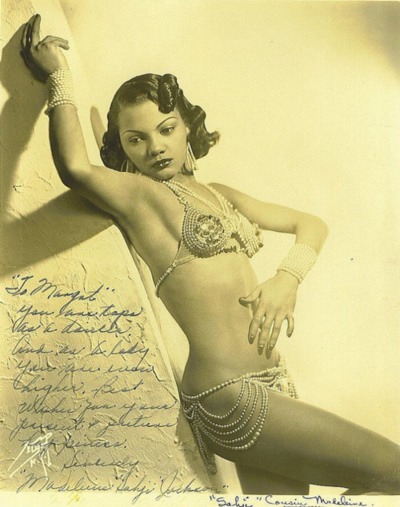 Sahji Jackson was a shake dancer best known for her appearance in the 1947 movie Jivin’ in Bebop with Dizzy Gillespie. Jackson’s moves are one of a kind and some even speculate she is one of the first American contributors to the popular twerk dance. She later became a popular singer in South America. 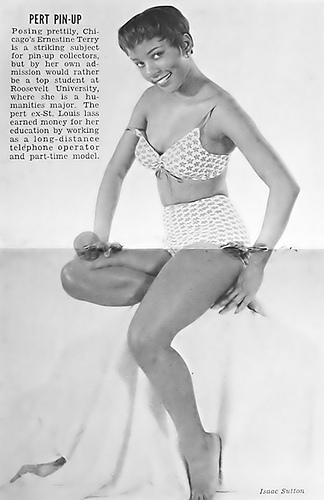 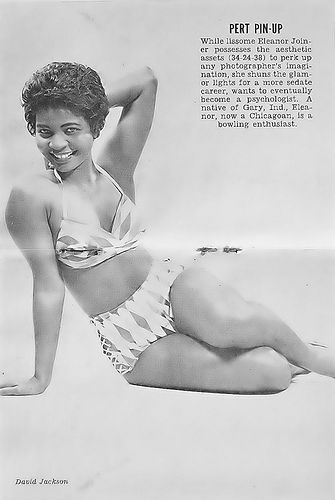 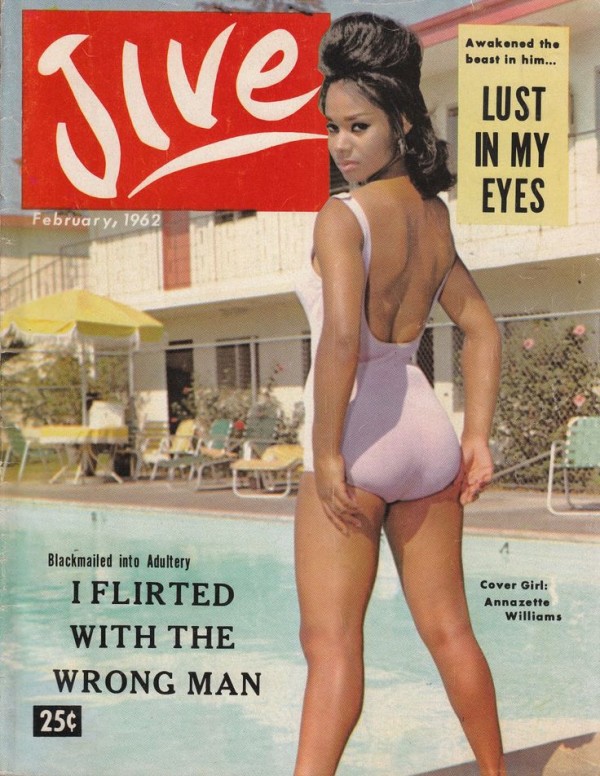 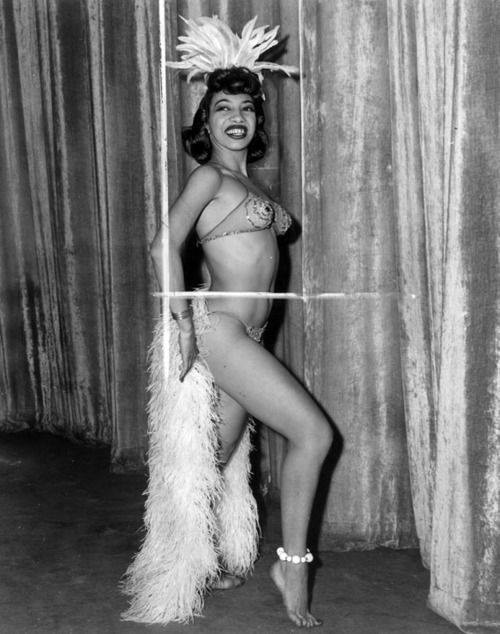 Marie Bryant was a dancer, singer and choreographer. Bryant was known as one of the most vivacious dancers in the United States. She performed at the Cotton Club at its height alongside Duke Ellington. She later would go on to teach dance to the likes of Marlon Brando, Lucille Ball, Debbie Reynolds and Bob Hope. 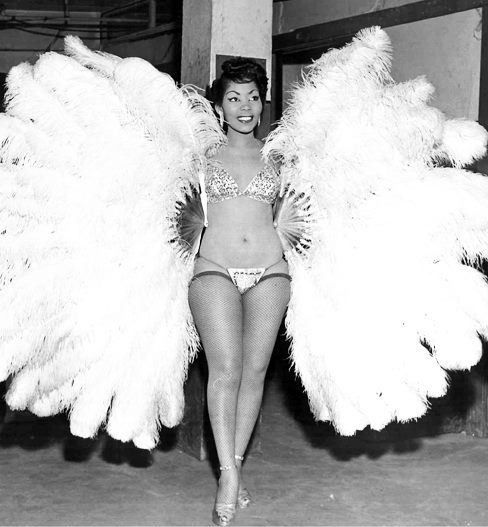 Jean Idelle was one of the first black burlesque dancers. Most known for her fan dance performances in which she adorned herself in white ostrich feathers, Idelle raked in a whopping $12,000 a year ($104,000 present day). 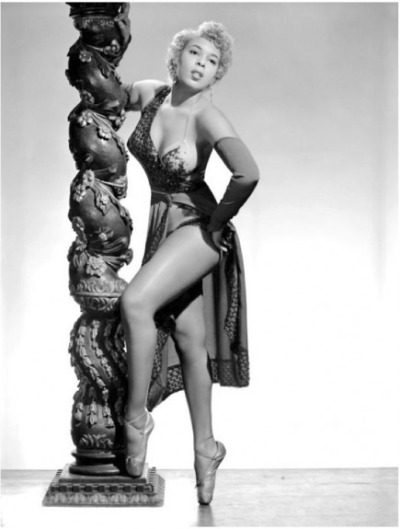 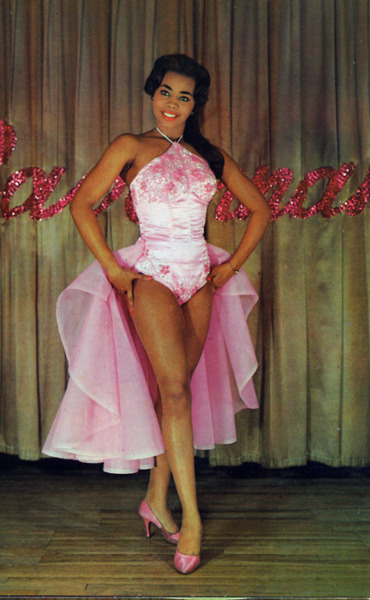 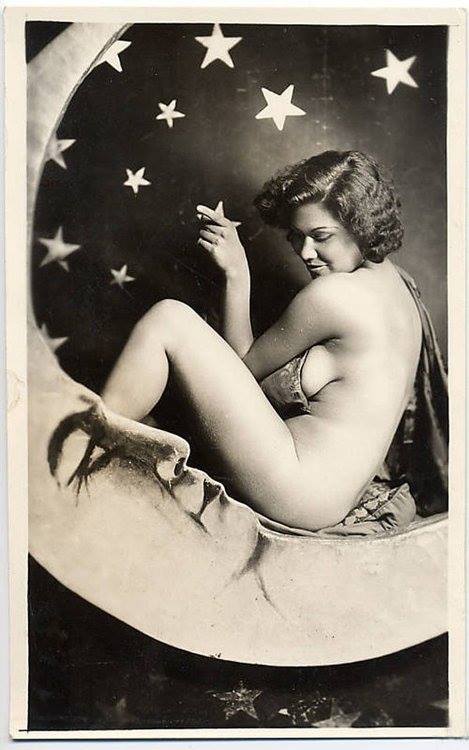 Are there any black pinups you can add to this list? Please comment if you know the identity of the unknown women.

‘Why hollyweird won’t glamorize Negro girls’.…damn…This was asked in the 50s…and nothing has changed.…I wonder what the world would be like if Black women stopped watching tv, all of it, and stopped supporting their movies?… I think Black women would be happier and wealthier.…boy if only.

You are right. We need to stop supporting what does not support us and definitely stop mimicking the mediocre. Women of African descent are among the most beautiful in the world and EVERYBODY knows it. Euros won’t level the playing field because they are afraid of losing. Poor sports! If we brought back our own judges and contests we’d see some real competition — especially when it comes to that feminine body. We are right up there with Italian women, Brazilian women and South Asian women, aesthetically. The overemphasis on light skin color and certain hair types and lengths leaves… Read more »

These pictures are beautiful, but usually when I see recent photos of women on this site (with way more clothing on) they are judged harshly. Maybe putting the word vintage on the article makes a difference…shrugs

That is exactly what I am thinking. This is still women selling their bodies for sex. I am not judging anyone at all, but I do have strong critics against that act.

These women did not sell their bodies for sex. Most of the women pictured here were burlesque dancers. They danced ON STAGE. They were (and are) trained dancers, educators and speakers. These photos were taken for promotion or as ‘meet and greet’ photos.

Walking around shaking your breasts and genitalia for work is indeed selling sex for money.

I don’t think you know what sex is if you think dancing is sex. Maybe your parents didn’t have “the talk” with you.

I agree with you totally! These women went thru hell as did most women of their time but especially women of color in a white male dominated world! I am a proud member of the Black Pinups of Atlanta. The few of of pay honor and proudly carry the torch for these amazing, beautiful women . I want to say thank to them!

So glad to see these ladies getting recognized! ??

This was informative and enlightening… Thanks for sharing

Nice article. And yes, these ladies have killer bodies.

Yes! Her body is stunning!!!

Thanks for sharing. Body for DAAAAAYYYYYSSSS! PHENOMENAL! Inspires me to do a pin-up for an anniversary gift to my hubby. Those were done so well.

These women were talented pioneers. They were in control of their bodies and their sexuality. I’m open to discussing what exactly you found to be degrading in the article?

I asked a question first. What does this article have to do with natural hair? What is so groundbreaking about putting on a g‑string, a bikini top (or simply just a blanket) and posing for the camera? Thousands of girls do that on Instagram. It doesn’t make them talented or inspirational — it makes them sexual objects. They are using their nearly-naked bodies to garner attention instead of using their hearts, their minds — their intelligence. Maybe the reason why your blog has lost commenters is because you have very much steered away from the main purpose of this blog:… Read more »

These women are not obviously not instagram models given the time period and they are definitely using their hearts, minds, talent and intelligence which are all deserving of recognition.

We’ve also mentioned that BGLH is expanding its culture scope as of March 1 of this year. We are now covering more than just natural hair. Please see here: http://bglh-marketplace.com/2015/06/bglh-is-changing-and-its-a-beautiful-thing/

They all look so beautiful! Pioneers way ahead of their time.

What? Who are you to say that these Ladies are degrading themselves? You can miss me with that respectability politic bullshit.

“Thousands of girls do that on Instagram” yes, TODAY they do. But in the 50’s? While white pin ups were praised black pin ups would have been treated…well exactly as pathetically as you are treating these women.

You are an fool. Many of these women lived in a time when black women couldn’t get a decent job and it was really hard to have one, they depended on men for everything as well, black and white women alike. These women made a life for themselves, they wanted to be models and dancers in an industry that was dominated by white girls because some white men had the idea that only that would sell well (yet it was only an excuse to discriminate). These women were independent and I’m pretty sure they had to face all kind of… Read more »

Ok…is it just me or does Lottie the Body Graves and Angela Bassett look like long lost sisters?

yes, i thought the same thing as well!

I thought the exact same thing..

They were ALL beautiful! If some idiot thought there weren’t enough beautiful black women to photograph back in the day or otherwise, they didn’t bother to open up their eyes and look beyond the European standard of beauty!

.…..And not a fake butt in sight…perfect.

My Turn as a Chocolate Cheesecake – HANNAH EKO

[…] world is the apparent celebration of an assortment of bodies. I’m not saying there aren’t issues of beauty ideals in this vein of modeling, but the standards of being a modern day pin up way more open than […]

Natural hair movements like the one that you currently a part of stand on the shoulders of women like this who first had to fight to show the world how beautiful black women were. It’s easy to speak about wanting to be valued for your heart and mind if people are giving you that opportunity…just remember that it wasn’t always an option for us.

I adore this article and love seeing pictures of Black pinups they are difficult to come by. All the women are gorgeous and their bodies are perfection. I am sure finding lingerie ideas.

Seriously, thank you for this. These women are overwhelmingly beautiful and they’re not a size 0 or have impossible body assets. I wish more people — especially young ladies — could see this.

And what does this have to do with natural hair? You don’t have to write an article on every single topic related to black women; especially one that degrades us such as this.

These is amazig. It is truly hard to come across Black pin-up models due to the discrimination black women faced. They are lovely and they clearly loved what they were doing despite discrimination. I love Toni Elling especially as she had such poise and beauty that would make you want to stare for ages. Also, I don’t understand what the deal is with respectability politics. Stop shaming these women. It is not in any way degrading in any way. If you stop to see this as an expression of art instead of putting your ‘let’s cage black women one more time’… Read more »