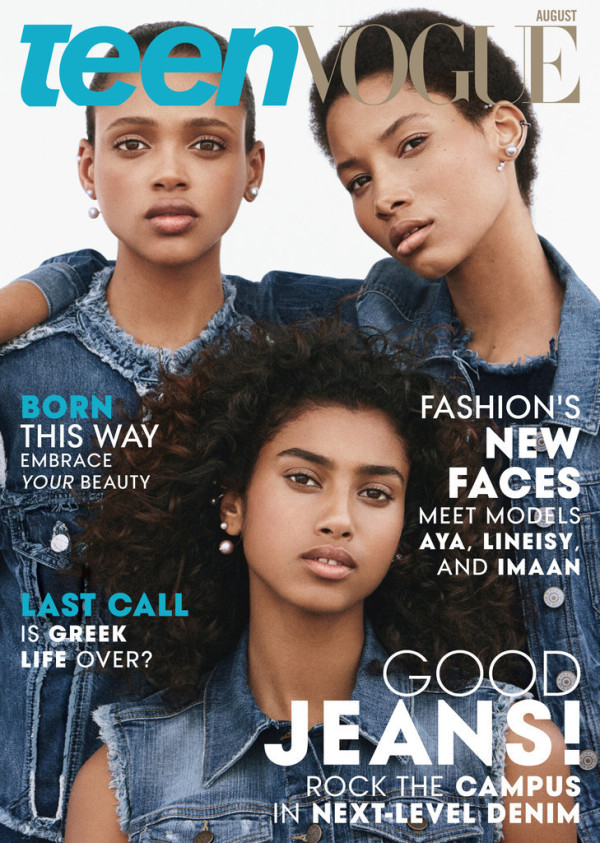 This is the cover of Teen Vogue’s August issue. Yes, this is the same Teen Vogue that came under fire just last week for excluding more women of color in a black hair-centric editorial.

The cover features 3 up and coming models of color (Imaan Hammam, Lineisy Montero and Aya Jones) and the same editor behind the controversial Senegalese twist editorial, Elaine Welteroth, is responsible for making this happen.

The piece describes the three beauties as rising stars in the modeling world who are changing the face of the industry;

“Egyptian-Moroccan Imaan Hammam is a breakout star who landed a career-defining Givenchy campaign and her first Vogue cover. French-Ivorian beauty Aya Jones walked in an astounding 47 runway shows. And Dominican stunner Lineisy Montero kicked off her modeling career on the lauded Prada runway (she, along with Aya and Imaan, are among a small cadre of black models to grace the influential catwalk since Naomi Campbell in the ’90s). Each accomplishment plays a major role in a progressive sea change that positions diverse faces at the forefront of fashion.” 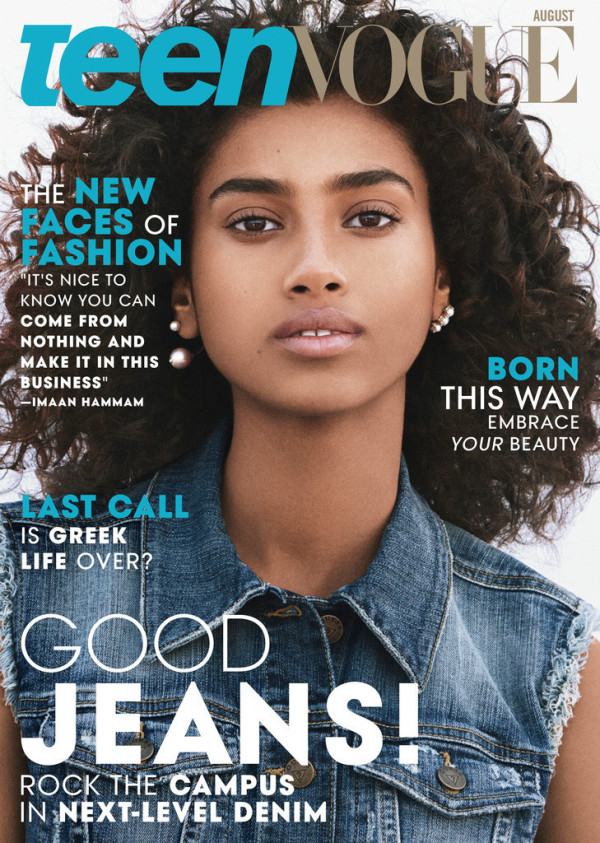 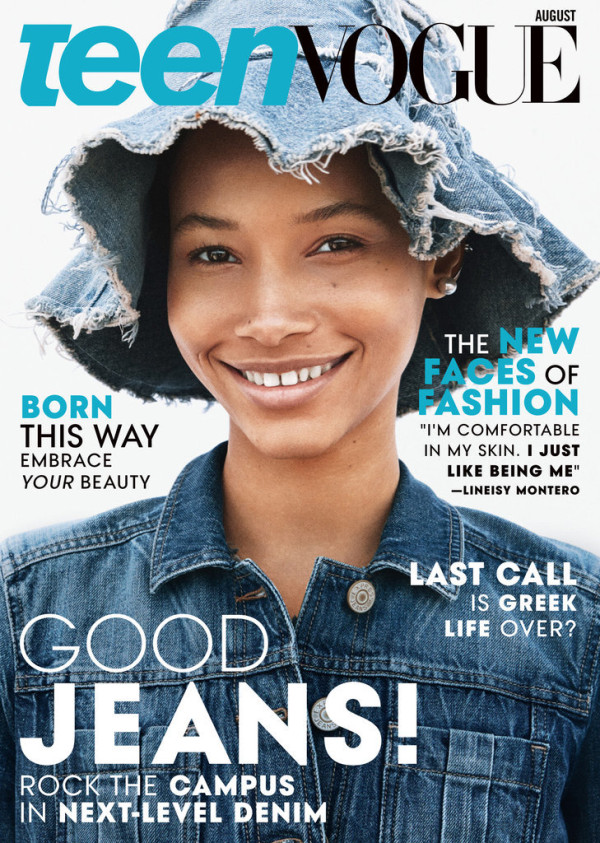 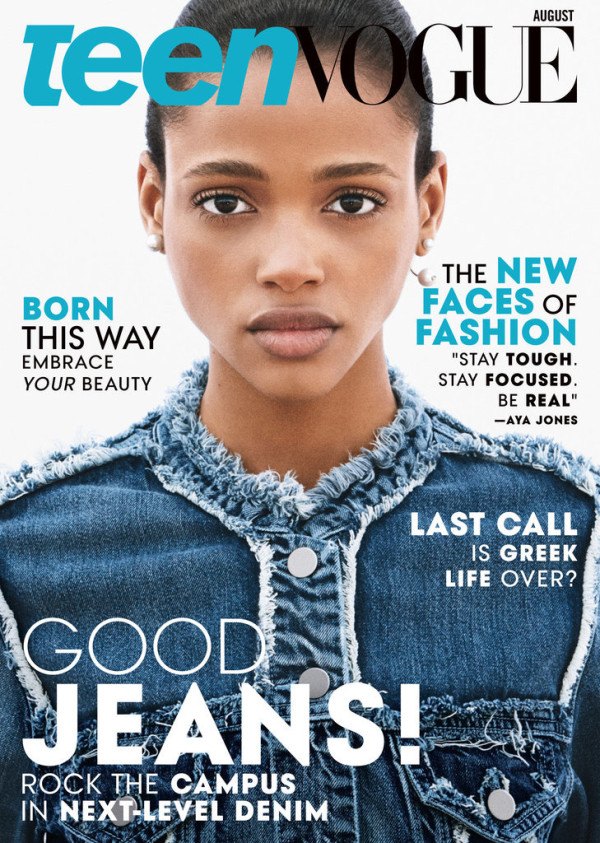 The beautifully done piece calls to mind i‑D magazine’s September 2009 “Pretty Young Things” cover which featured all black models and rightfully declared them industry up-and-comers. Sessilee Lopez, Arlenis Sosa Pena — and Jourdan Dunn and Chanel Iman in particular — have all gone on to have incredible success. 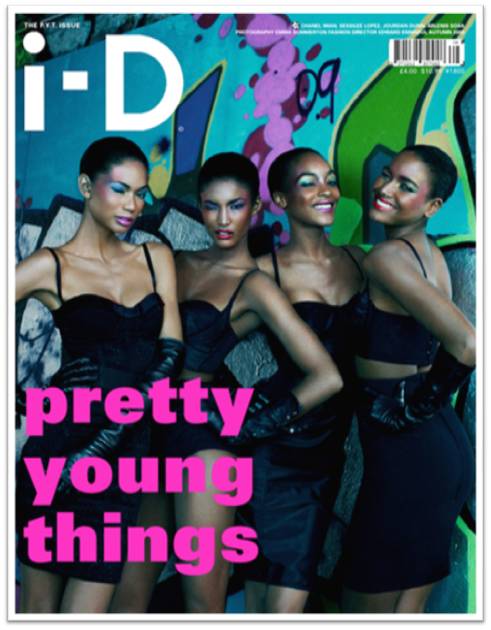 Vogue’s piece is beautifully done, and groundbreaking for sure. We can only hope the thoughtfulness behind it permeates all of Vogue’s coverage of black women, and trends started by black women.

What do you think of the new covers?

Great cover! They are stunning & deserve to be recognized as such. The beauty of black women is universal and natural. WE cannot be denied. Finally, Vogue got it right.

“I am confused by the criticism of the all black cover?”–Funny isn’t it. Now they see what we mean when we speak out about exculsion.

That’s exactly what I was thinking. This is their “But we’re not racist!’ response.

Yes, plus they want our continuous support.

Apparently women of color are taking over print fashion media. On this one cover. This one month out of the last five years.

which one is black?

That’s probably what Rachel Dolezal said to blacks who initially questioned her race then we wonder just how a white woman could pass as black.

They are all black.

Mmmmm mixed parentage too. I’m sure I read one of them is mixed French and Ivory coast or other. Anyway — stunners all the same. We know as far as the media / fashion goes — light or ‘blackish’ is the acceptable form of black. Well. For the women anyway. Men can be an tone they like. SMH

The next person to cry white people rocking afros and french braids, has to wear dashikis everyday forever and stop using things that they invented. Like cars…

Yet white people use things invited by black people without ever giving them the credit they deserve. Stop being ignorant.

You use more things invented by them than they you. Coward.

If you didn’t use things invented by them without giving credit, you might have an argument. But you do, so you don’t. If you are really so adverse to cultures taking from EACH other get a passport and go live in the bush.

@fancycoils:disqus I’m sorry but we gave them their entire nation, and inventions, we builed everything they have because they used us as slaves for years and years. they accumulated profit and ressources from our countries, and people. They stole our ideas…just think about music, Elvis etc. They had time and money to create stuff because they had free labour. Do you think white countries would be as developped if they had to spend hours picking cotton and building buildings? No. They used us, they used everything we have, the last thing we have is our culture. How dare you come at… Read more »

You sound so ignorant crying about hairstyles when there so much more at stake.

Do you not realize that we have taken things from white culture and profited…tennis, basketball, baseball, futbol, football.

If they give up wearing our hairstyles, are you prepared to give up the English language? Cars, airplanes, the Internet. GTFOH.

Woooowwww you are the ignorant one! They constantly steal from us, i don’t care about futbol, football.I won’t make a list with you of all the contributions of black people vs white, that’s just childish and we gave them their country, insn’t that enough for you? And I never asked to speak their langage idiot, it’s because they took our ancestors, made them into slaves here, kept them from speaking their own langage and kept them from preserving their own culture that the slaves were forced to learn their oppressor langage. you are so ignorant i can’t believe this, you have… Read more »

I love the cover(s), but… interesting they didn’t put any American Black models on there… #eyeswideopen

All this proves is that Teen Vogue and other magazines like this KNOW how to do diversity and CHOOSE not to in almost every issue. Buying things like this is paying for your own exclusion. They do the bare minimum for someone to not be able to say they literally don’t use ANY non-white models. I was too old for Teen Vogue when it came out, but it does’t seem to be any more diverse that regular Vogue, which I could never bring myself to buy because it was just so white. ELLE and InStyle have a little more color. Also… Read more »

The wish to stay ignorant — a great quote I read on youtube recently » On diversity — When people say “you can’t force diversity”, they seem to forget diversity is here in the real world all by itself but it’s just that white supremacy makes us believe that white is the default human enough to allow white Hollywood executives to not have diversity beyond one or two token non-white people. Diversity would just be representing the real world, and it’s not as hard as some people make it. Grey’s Anatomy did actual colorblind casting with their roles and that… Read more »

“Also notice how they put us on the cover in groups. That way when the
diversity statistics come out they can say they used 3 black models.”

First, off. Slavery would never have proliferated to the extent that it did had it not been for collusion with your African ancestors. Do you really think a few white people could steal 2.8M people without folks from their tribes noticing? Read a book. Secondly…slavery is over. You do realize that you don’t have to live in America, right? Get a passport, go to Africa and stay there. Find a nice, little uncolonized tribe learn their language and blend into their culture. If you want to keep crying about cultural appropriation without sounding like a jackass, the first step is to… Read more »

Sorry nope. How is your reasoning any different than slave masters who said, “Well we’ve given them a roof over their heads and food to eat, so we’re entitled to everything they have.” We are so quick to forget that the WHOLE COLONIAL WORLD was built on the backs of black and brown people. I’m not just talking the US, Europe also. And not just our labor alone, but our ideas, music, dress, etc. Was rock and roll not stolen from black culture? Did Victorian women not start wearing bustles to imitate black women’s bodies? Is Kim Kardashian not the… Read more »

And this is not even to BEGIN to mention that Africa and Native America for that matter was doing JUST FINE before colonialization came along. Do we forget that before pilgrims found the “new world” Europe was a sickly, disgusting and tyrannical mess?? Also, please educate yourself on how much Native American culture laid the foundation for what we consider, today, to be “white people’s culture”. It is a little known fact that Native Americans had to teach white pilgrims how to bathe, among other things… http://www.encyclopediavirginia.org/Hygiene_During_the_Pre-Colonial_Era_Personal

Despite all the (true) criticism i think its a beautiful editorial. Way to go!

the girls should be more diverse, we are a rainbow of shades and that should be reflected on this cover, not the safe cafe au lait tones, passable hair textures, and thin lips/small noses, features that are deemed “acceptable.”

Looks like a make up for That incident cover

It soooooo is! lol

That’s what thought too.

I’ve seen blog coverage about the Vogue cover on another site and could it be explained to me in a non angry manner as to why people are upset about it, because I am confused by the criticism of the all black cover?

The thing is… I’ve learned not to seek validation from white media anymore. They do not understand us, nor do they really care about us. Their media was not meant to uplift us, where just accesories or profit to them. I’ve learned to get content created by my people, for my people. However, I am happy that Vogue put an all black cover. Black women need to be represented as much as possible on the mainstream because right now, we are completly invisible. Or when we are represented, it’s in very negative stereotypes. Black women deserve the spotlight as well,… Read more »

Someone is trying to quell the backlash! I don’t believe there is a shortage of black model. I don’t believe they are just “not as qualified.” It’s so pathetic that an outcry has to propel them to do the (probably easy) work of securing black models. Was it that hard? The editor traveled thousands of miles to essentially get her hair braided because AFRICA IS SOOO EXOTIC LOL. They can’t help themselves. We are either showpieces or invisible. We can’t be everyday people.

They are all beautiful. I’m still mad at the very short shelf life black models seem to have. Meanwhile mediocre white women can make money for ages.With the exception of Naomi, black models seem to “fall off” really quickly. This despite the fact that Black people age better than white people. Most of the girls from Chanel’s Iman’s shoot have fallen off. They aren’t gracing magazine covers anymore, I don’t see them in many runway shows, or as first faces. Meanwhile, someone as basic as Cara delvine is still an it girl when she should never have happened to begin… Read more »