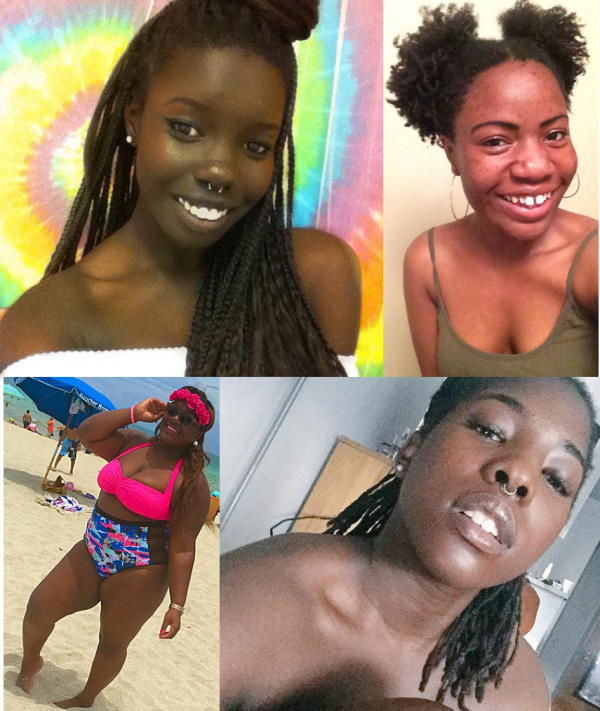 Black women are often credited with being more confident in their looks than other races, despite not fitting the mainstream Eurocentric standard of beauty. But a lot of us will tell you that that is only part of the story. We cannot forget that there are black women dying from illegal butt injections, and being ridiculed by other black women for being too dark, or harassed for being too light. And as much as we appreciate Beyonce around these parts, we known that her brand of beauty — fair skin, light eyes, small waist and big booty — is considered the gold standard.

The unconventionalblackbeauty hashtag on Twitter was started by users @HIFTBABG and @lioneesssssss to highlight black women who don’t fit what black culture sets forth as beauty.

There were many women who discussed their lack of booty.

And their slender frames, which bump the ‘all black women are curvy’ stereotype.

#UnconventionalBlackBeauty teeny tiny. Not curvy. Crazy hair. And loving every bit of it 😌✊🏿 pic.twitter.com/xwlHD6UpGu

#UnconventionalBlackBeauty Because I've always been way too skinny with a huge head & too dark-skinned to be pretty❤️ pic.twitter.com/tajCfucFGi

Many people referenced their kinky natural hair and wide noses.

#UnconventionalBlackBeauty cause no twist out tutorial can "hydrate" my kinks enough to make it look like curly hair pic.twitter.com/RPVAZLA8QD

And their dark skin.

I've always heard that I was unconventionally Black but never beautiful. So I told myself.#UnconventionalBlackBeauty pic.twitter.com/uQ6xzo8vXi

There were those who felt they were not the ‘right kind of thick’ according to popular standards.

#UnconventionalBlackBeauty i still don't see myself as beautiful a lot of the time because i'm a fat black woman pic.twitter.com/2NGBQJBA6Y

You can see the #unconventionalblackbeauty feed in its entirety here. You can read more about the creators of the hashtag here. Or watch them discuss the creation of the hashtag in the video below.

Ladies what are your thoughts on all this?

I think the main elements that can encompass true black beauty that we can promote is having natural hair and being physically fit. Seems fair. Nonetheless I do like the message.

I’m confused–who told these women that they were not beautiful?!?! I didn’t see one ugly chick in there. There are all beautiful, unique in their own way.

Lord we have a long way to go.

You must not be active on social media sites, especially tumblr where there’s a whole black girls are beautiful movement but there’s only a certain type of look that you usually see celebrated. It’s usually the #carefreeblackgirl/bohemian styled woman with natural hair (usually curly), light skinned or brown skinned sometimes, ALWAYS with slim nose, pouty lips…you’ll notice the look even on here where there’s a post showcasing a certain hairstyle or trend. I follow quite a lot of black beauty/black girl appreciation spaces on different sites and i’ve definetly noticed there’s a preferred look even if it doesn’t always align… Read more »

They are all beautiful! Love this!

Amazing initiative! I feel like as a community of black women we are learning to really love and accept ourselves. We are learning that accepting ourselves also includes accepting our sisters as they are. We are learning to value different hair textures, skin colors, body shapes, facial features. It’s so beautiful to see this mouvement constantly growing stronger and deeper, it’s so uplifting. It’s helping me to love myself, and I’m so appreciative of my black sisters for that. God bless

I never noticed that. Slim nosed,full lips,light and brown skinned only being showcased. Links please?

I think everyone is extraordinarily beautiful. My mom always emphasized to me that it’s our differences that make us beautiful. Who wants to look like everyone else?

Black people are each so individually beautiful that I think a black beauty standard would be ridiculous. Symmetry seems to be the only true universal measure.

Uh where?? *Racks brain for posts where we feature bohemian styled women with light skin and slim noses…*

I’m 19 and I’m dark skin the color of Hershey’s milk chocolate , have acne on my face ,slim , don’t have a big butt or boobs although I do have a tiny waist. , I eat a lot and lift weights to gain weight but my fast metobalism stops me from gaining weight , I have a button nose , I look years younger than my age , and I have natural hair that I keep in cornrow braids . I am beautiful with all my flaws . Black is beautiful. All shades and sizes of black is beautiful… Read more »

I was told by another light skinned girl that I wasn’t ‘good’ light skinned because I have a wide nose. No matter what a black woman brings to the table we will be told by someone we aren’t enough. We are enough and these are some pretty girls.

I went to that twitter page and found beauty in every single person there. I understand how they feel. I never saw what people saw when they told me I was beautiful or pretty. I never wanted pictures and now that I am turning 60 in a few days, I finally stop fighting what I was given. I embrace the way I look and thank people for the compliments of not looking like I am turning 60 yrs. old. I just don’t care if I don’t fit in what you think is beautiful. I love me. I love that the… Read more »

I hope I.look.that good at 60 too and NOT just embrace but celebrate ALL OF ME and my black sistas!

All these women are beautiful, but as a nurse, I think it needs to be said…being obese is not healthy and it had nothing to do with loving yourself in your natural state (unless you have some kind of endocrine disorder). If some of those girls ATE more natural food instead of filling up on processed crap every time they got hungry, they might be much happier and HEALTHIER. I’m not saying overweight women should have no esteem–that’s just crazy. But at least be honest with yourself and stop hiding behind this “curvy/thick” crap–you past that stage looooong ago! If… Read more »

I believe there is no set standard of beauty. I also find It extremely frustrating that society puts black women’s beauty in a box and if you don’t fit in the box your beauty doesn’t count. Completely loving yourself is a rebellious act. It took me a while to look in the mirror and find beauty. I don’t have the typical booty, I have a wide nose and 4c hair. I have learned to love every part of myself and I encourage everyone to do the same.

This is amazing. I wish I could join in: huge wide nose, athletic build, no hourglass figure, natural hair, hyperpigmentation, no white-girl-painted-brown-esque features

I guess I’m the crazy one, because I find “standard” beauty to be very boring and unattractive, and people who fit that mold never capture my attention. I prefer the unconventional, like extreme skin color, crazy hair, and other features that stand out. Being beautiful does not mean that you fit some stupid mold; rather, it means that you stand out from the norm. And someone please tell that Nancy that her dark skin and big teeth are strikingly beautiful! I wish I had a big, beautiful set of teeth like that. I tried to buy some once, but braces… Read more »

I guess I’m the lone ranger here because I think this is much a do about nothing. Why do women go on social media for validation of beauty? Does everything we do in life require a selfie and a thumbs up from strangers now? You look like what you look like. Everybody is not and can’t be beautiful because beauty is in the eye of the beholder. What’s beauty to one person can indeed be plain or ugly to the next. Waiting for validation from internet strangers is just crazy. I really wish young women be them black or white… Read more »

An important statement to make, as in the “black community” these day, being beautiful means: big breasts, a tiny waist, a big butt (real or otherwise). This body then needs to be packaged in a tight pencil skirt and a cropped top, and balanced on sky-high Louboutins (fake or otherwise). To top it off, a 20-inch weave or wig is a must. Sad, really.

It’s all ABOUT self-love!

Beautiful and being beautiful is an inside job. I thought they all look beautiful to me.