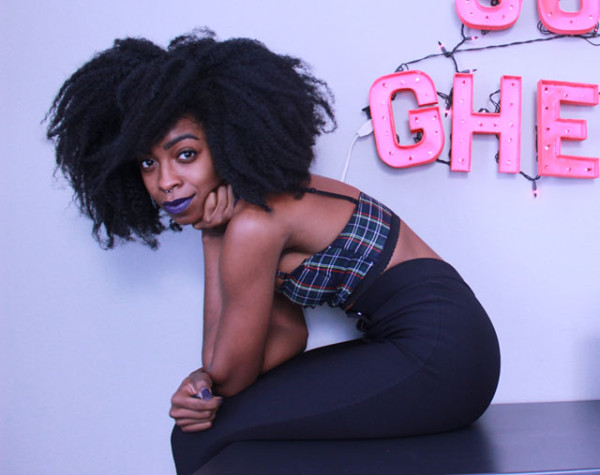 Were you always comfortable with your skin color?
Pretty much, I didn’t even understand the concept of “colorism” until I reached middle school. My magnet elementary school was all-black, save maybe 1 or 2 students and I never had to deal with issues of skin color. Now, my choice to dress like Clueless characters was a different story.

Did you view it as something negative or positive?
I didn’t think about it in either context until the 6th grade. I felt as if I was pretty confident in my skin color until I turned on the radio.

Were you bullied?
Yes. I had an ex-best friend from elementary school who shared the same crush as me in middle school. After, it was later discovered said crush liked me back, I went through endless taunting from her. She would say things like, “He don’t want you. He wants something caramel, like a Twix-bar. You’re dark chocolate.” Silly me, I’d try to compare myself to candy bars as a 6th grader and reply, “Well I’m more of a Snickers bar.” Ugh. That experience coupled with songs that made exhausting “caramel references” were often things that made me question my melanin content.

Was there a standard upheld by family members/peers that you felt you needed to live up to?
Not really. There were a couple of times where I would go to cheerleading camp in the summer and my mom would advise that I wear sunscreen because I came back darker from the previous trip. This also could’ve been genuine concern to keep me from frying my skin like an egg because I foolishly believed black people didn’t need sunscreen at the age of 13.

How do you feel about your skin color today?
A-OK. I don’t really go for a lot of pale, pastel lipsticks, however.

What advice would you give to your younger self?
Tell that big-headed girl to shut up.

Some people feel that certain skin colors come with privilege and others with a lack of privilege. Have you experienced light skinned privilege or a dark skinned deficit (ugh, for lack of a better phrase!) in your life time?
Of course. Some of the most popular rap songs referenced wanting “bad a** yellow bones” and “red bones” Yes, Boosie, I’m talking about you. Yung berg’s comments about not liking “dark butts” was a thing. I remember being on set of a music video where dark skin models walked off set because they were being treated as extras and the main love interest had light skin. The hierarchy of skin tone was blatant.

This series was prompted by an essay by HuffPo writer Kim Lute about how she didn’t have any black female friends because she was light skinned. What has been your experience interacting with black men and women of other skin colors? Do you think there’s a divide based on skin tone? Do you find that light skinned and dark skinned people still segregate themselves?
I don’t know how to answer this for fear of looking like Raven Symone on the View. (No tea, no shade, no pink lemonade.) I find there is some division. My friends are of all colors and races and beautiful as all in the universe. I’ve always identified myself as dark skin. Which now I’m learning is completely subjective, as some people would argue that I’m “brown skin.” I even remember the #mediumbrowns tag on twitter a few years ago for folks that were in between the dark and light spectrum. Traditionally, of course, it’s always been light or dark and I’m nowhere near Robert Ri’Chard’s color so I just identified with the path of least resistance, which was “dark.” Ironically, this self-identification is now being challenged. So I just don’t know anymore.

Click to read Tori’s story on the next page.
Or go back to Chinwe’s story.

So are we ready to admit light-skinned privilege exists or nah. everydayfeminism.com/2015/02/light-skinned-privilege/ We gonna pretend darker skinned criminals and girls in school don’t get punished harsher or nah mobile.nytimes.com/2014/12/11/us/school-discipline-to-girls-differs-between-and-within-races.html?referrer=&_r=0 Lighter than a paper bag don’t exist or nah Pelo malo o no? I can go on for days with examples and empirical study. But to say light skinned women don’t face sexualization due to their subjective “attractiveness” and proximity to whiteness… To say that dark skinned women don’t face hypermasculinzation because it offends you to admit there are people in the world that don’t have your same experience? To heal… Read more »

“No tea, no shade, no pink lemonade.” Lol, can I borrow that one, Rinny? But in all seriousness, thanks for sharing your experiences with us, ladies. They’re appreciated and insightful. From elementary school on, I was always in a situation where I was in the racial minority, but it didn’t really matter because no one really said anything about it. I blatantly knew I was different than other girls, and when I was picked (because I was) it had nothing to do with my race and everything to do with why I didn’t have funds to keep up with whatever… Read more »

That last story really hit home. Especially the part about imagining my kids being light skinned. I feel so guilty and ashamed for ever having that feeling.

im not the only one

I’m honestly done, like on a serious note this is getting too much .Before I read this article I told my friend to wait and see that all the stories would involve the typical dark skin girl that was bullied and hated her skin color etc etc. Same story every time. Sometimes its like people want to make is seem that all dark skinned girls have been bullied or were insecure about their skin color. I believe a dark skinned girl that has never been negatively affected by colorism should have been included in this to show different sides of… Read more »

Telion
Reply to  im not the only one

You know what? That’s great. That’s great that you’ve never experienced the buying or the negative self esteem associated with dark skin- you are blessed, and so right to be grateful. That does not however negate the fact that the story is much different for a great many of us ‘dark skinned’ girls. What you need to understand is that just because you haven’t experienced something doesny make it irrelevant. None of us directly experienced slavery- but does that negate its impact on our society, our families and our world? If you’ve never been poor does that mean poverty is… Read more »

Thank you! I came on here to say all of this but you did it so very well. I’m also dark-skinned and while I haven’t had the experiences these women have, I’m not about to come on here to dismiss and discount their histories because it doesn’t mirror my own. Furthermore, I fail to see how these women’s stories are perpetuating this “dark skinned girls are struggling” trope that imnottheonlyone is complaining about! None of these women are saying “I’m dark-skinned, woe is me,”…rather, they’re being honest about their negative experiences and sharing how they have been able to find… Read more »

Amen!! I couldn’t have said it better myself.

Rylee
Reply to  im not the only one

Your experience is the exception not the rule.

The link to the next story does not work.