Rihanna cleaned up at this year’s I Heart Music Awards rocking a green lip, bantu knots and a sheer gothic lace-inspired dress.

Some gossip blogs such as Perez Hilton have been downright snarky about the popular natural hair look, comparing it to Uzo Aduba’s character, “Crazy Eyes,” on the hit series Orange is the New Black. Don’t they know black women have been about this life? Before Netflix! Before DVDs were a thing! Bantu Knots were poppin’ back when we had to use dial-up to connect to the internet.

Ironically, Rihanna accepts her award from Mel B, member of legendary 90s Pop group the Spice Girls who also donned Bantu knots back in the day.

Other celebs such as Kelly Osbourne rocked bantu knots last year.  So what’s the big deal? 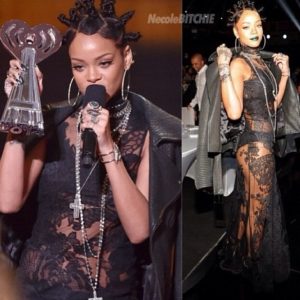 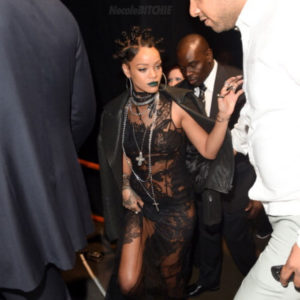 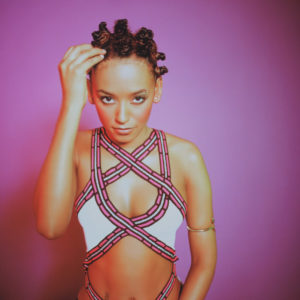 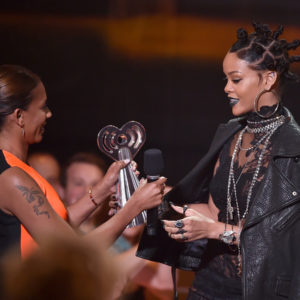 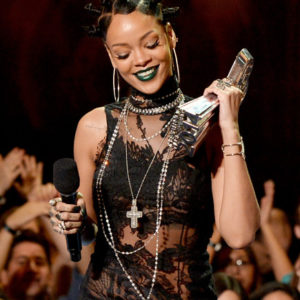 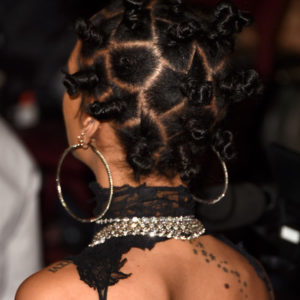 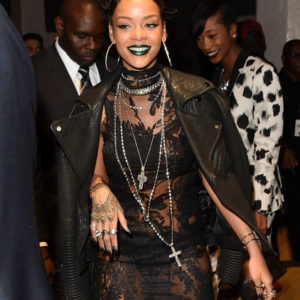 What do you think of the look?

Love it! I also noticed that she appears to have a head full of hair (undamaged by the weaves and wigs she wears) and edges! YES RiRi!

I guess because I work with Adobe photoshop, etc. I see a little touch up around the center front edge. This could be a photo touch up or otherwise it’s black wax. With that said, overall hair and all she looks great and happy.

Yes Bantu knots have been around a long time.

Yes, I was thinking her edges look filled in or drawn on…but I love the Bantu knots tho! Esp how they did the parts

May
Reply to  Jamz

Rather than drawn, they seem to have sleeked them forward, when I saw a closer picture

Knotty Natural
Reply to  May

I agree with your assessment; her edges are sleeked down, rather than drawn on. I can’t imagine she has a full head of healthy hair and would need to draw on edges.

She’s had her edges touched up/ drawn in with black wax or an eyeliner pencil can produce same effect. In fact viewing her front image its easy to see hairline looks strangely unnatural.

I like this look. I always love Rihanna style. She always dare to be different.

I actually really like this entire look, although maybe not for an everyday type thing. I’ve rocked bantu knots occasionally but I never really dress them up for a night out.

Those parts better be neat! I’m sure her hair stylist got paid well to do them…

as a catholic, i disdain people wearing a rosary for ornamental or edgy purposes. I know it’s a “goth look” but knowing the meaning behind the rosary and what it means to me just annoys me every-time i see someone wearing it like that.

The rosary isn’t a biblical thing- especially considering that most of the Bible is Jewish in origin, and Catholicism in the broadest sense originated after the books of the old testament had already been written. It is still an important and sacred part of the Catholic tradition.

Some of these “religious” folks need to go worry about their sinning ways, I.E. the fact that most of ya’ll have no business wearing Rosary beads, or even white on your wedding day…instead of getting bent out of shape over something that isn’t even mentioned in the bible. Worried about the wrong things.

I’m not here for theological debates although I’ve learnt enough about church history from my 4 years in a catholic college. Just have some respect and move on for crying out loud. Try being mature.

@Yasmina — What does that have to do with anything? It’s still a religious symbol — are you not aware of that”

@Lablooplah — I don’t like crucifixes on clothing, so I feel you. And I’m not catholic — I just think it’s disrespectful.

I’m nowhere near religious, and I side with lablooplah and HeavnsGirl. I just feel like wearing a crucifix in that manner outside of church is kinda.…tacky.

I dont see how it all matters anyway. Jesus didnt perform miracles. He was made up.

@Phoxxie, and this is a Sunday too!

i love bantu knots. they suit rihanna a lot

I personally don’t like the idea of bantu knots (or chiney bump as my mom always says) as a going out style. Back in Jamaica, the only time I wore chiney bumps out in public was after my mom washed my hair, preparing it for braiding. I HATED walking down the street with my hair like that to the hairdresser.

However, Rihanna is a woman who can pretty much rock anything, so good for her.…BUT it’s definitely not something I ever plan on recreating. The green lipstick though?? I’m definitely game for that.

that girl
Reply to  Kerri

heeyy fellow Jamaican, i know that feel, i also hated it and whenever i was sleepy, to lie down on that was heeellllll.

Westy
Reply to  that girl

Trinidadian here and it was the same thing…lol. You were getting your hair ready for styling, not that it was a style itself! Go Windies!! Lol

Yes! When I was younger, we felt a lil embarrassed wearing chiney bumps in public. It was seen as more of a ‘protective style’ or something your mum did at home until she was ready to actually ‘style’ the hair lol. Sidenote, I’d never even heard of the term Bantu knots until I went natural lol.

Love RiRi, love natural hairstyles. However, this is not one of my favorite looks on her. Her style is on point most of the time, but the whole ensemble seems overdone. A hairstyle like that may benefit more from simplicity in the outfit and jewelry because it draws attention to the face.

I saw Mel B. with Bantu knots when I was about 9 years old and I begged my mom to do them for me 🙂 She did! I loved them, and I thought it was so cool for Rihanna to wear then out.

I never liked Perez Hilton! he was always talking trash about people even when he was fat& A nobody trying to come up in the world of Media Entertainment. He is always talking about celebrity lives, their careers, just passing judgement on their talent, speculating on their personal lives, spreading rumors and just in general being a nasty person. Then he went and lost weigh& acted like he was now the s***!! he is just a talentless glorified “mean girl” with any a media platform to spread his negativity and garbage into the already shallow world of entertainment. what could… Read more »

Why do people listen to Perez Hilton? Not being snarky, I’m just honestly curious. I just don’t get why his blog is something people care about.

I’m not a Rihanna fan by any means, but I love the Bantu Knots! I was just thinking of ways to rock Bantu Knots in public the other day, because I rarely see them worn outside as a hairstyle anymore, just inside the house as preparation for a “Bantu Knot Out”.

I must say that the bantu knots really match her dress and the whole theme that she was going for and …i also rock bantu knots as a hairstyle too! Shout out, Hey RiRi!

I think this is great, and daring. She should next try a bantu knot twist out look — that would be fierce.

I don’t usually like bantu knots as a going out style themselves but it definitely worked with her look!

In the photo showing the Bantu Knots from behind it looks like she has flakes in her hair. Love the overall look. love how daring she is with fashion.

Not feeling this look. I haven’t seen very many people who are able to pull off wearing Bantu Knots as a style. Rihanna’s gorgeous as always, but this was a fail except at getting attention. I wouldn’t be surprised if that was the point.

Mel B was cute. I used to love the Spice Girls.

I think Mel B rocked them better. I think Bantu knots being associated with a ‘Goth style’ isn’t correct.(it isn’t gothic at all) Not saying Rihanna looks bad but the over all look isn’t my thing. However Pérez Hilton need to take a seat. Why do people listen or read what his no talented behind has to say.

For once I like — I remember when my mum used to put my hair in bantu knots aka ‘china bumps’ as a child — I used to cringe in horror but compliments came nonetheless which made me feel less bad. I think its great that a popular figure is actually wearing an age old style as a hairstyle and not as a setting style (bantu knot out). I haven’t been brave enough to don the style myself lately and from memory bantu knots are not the easiest thing to sleep on … maybe one day I will … maybe

I love them! I rock them all the time and have been for at least 10 years,I have to scream out a correction just like cornrows were not invented or popularized to anyone but white people by Bo Derek bantu knots were not popularized by Gwen Stafani or Miley Cyrus black women have been wearing them for years.

OMG Rihanna looks so cute with them bantu knots. I love everything about her outfit <3

I love them I’m not a fan of Rihanna but Perez Hilton is cruel . He has nothing to do with his life but talk trash and gossip about celebrities!

I’m just gonna say, I adore Rihanna.
This look was super cute on her,
but then again she looks good in anything!