After Months of Erratic Behavior, Azealia Banks Speaks Out About Her Mental Health

Azealia Banks’ name stayed in the headlines in 2016, but not for her music. The talented rapper seems to always have back-to-back dramas unfolding, from selling infant bleaching kits to taunting Brazilians. As a result, Banks often finds herself the target of ridicule, with a common refrain being that she is ‘crazy’ and needs to leave the public eye, get medication or both. But in a December 22 post Banks made clear that she is aware of her mental health issues and has tried psychiatric medication. The screenshot was caught by AfroPunk.com on Banks’ now-suspended Facebook page;

Instead they joke and prad at you and say you need a doctor yet have no idea about the type of uncontrollable chaos that goes on inside your head.

On top of arrogantly suggesting you need to be medicated, these people
Have no idea how gnarly psych-drugs are.
All the trial and error of finding something that works.
No idea about the sleepless nights, the persistent paranoia, the loss of
appetite, the dull — delayed orgasms, the cystic acne, the skin discolorations,
the weight loss, inability to emote, hair loss, the self loathing and thoughts of
suicide that come along with psych-drugs.

It’s already in the music” 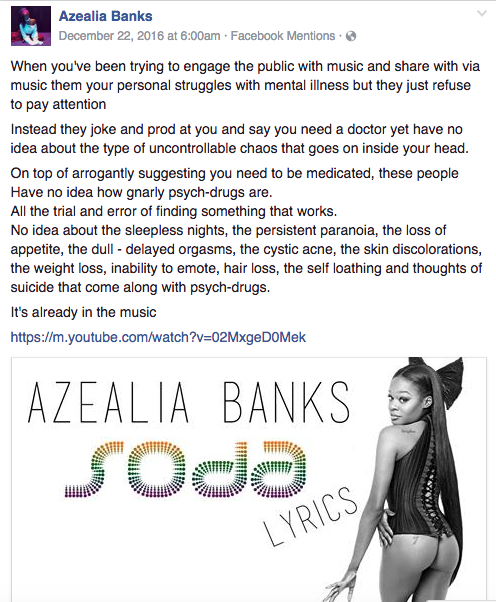 Banks then included a link to the lyrics off her song Soda off of her 2014 album Broke With Expensive Taste.

Banks isn’t the only high profile Black American to struggle with mental health this year, Kanye West, Kid Cudi and SZA have all grappled in the public eye. It is easy to loathe Banks for the many, many foolish, problematic and downright nasty things she says and does. But behind the scenes, there is a woman struggling to find her center. All we can do is wish her well on that journey.

Yeah, but what I don’t see here is accountability. I really do feel for her because I also have a few mental health issues and decide not to chemically medicate. But I do medicate by meditation, prayer, conversing with friends (haven’t gotten to the point where I need professional counseling). It almost seems as if her response is a “shrug” to all of her recent outburst. I’m not saying her outbursts are dangerous because I don’t think she has phyiscally assaulted anyone. But when you constantly put out negativity, and that’s not what you want to put out, then it’s… Read more »

Medication ALONG with those other things…

Vee you are completely right about everything and I am glad you have a path that works for you. I do totally agree that accountability is missing as far as Azealia, she know her illness, she needs to take the correct steps to avoid the triggers for her. I do just want to add that medicines are important particularly with bipolar disorder where there are periods of depression (lows) and periods of mania (highs), There is a biochemical aspect that people neglect with mental illness. It is often regarded as just a disorder of the mind, but in reality the drugs… Read more »

Was she really making music or arguing with people via social media? Is she seeking sympathy? I wish her well also

Not everyone with mental problems is being erratic, mean and disrespectful. This girl clearly has issues but what she needs is help from support from her family and friends. She needs to stay off social media !

It’s a fine line between sanity and insanity. Most of the time, a person doesn’t even know they have a mental issue unless it’s pointed out to them. Some things are beyond friends, family, and social media. If NOW SHE realizes, she needs mental illness HELP, GO GET IT NOW AND LIVE A HAPPIER, HEALTHIER LIFE MENTALLY, PHYSICALLY, AND EMOTIONALLY.

If this is the explanation for the hateful problematic things she’s said then…yeah it makes sense. It doesn’t excuse the behavior, but it excuses the person — especially if she’s coming to terms with it. Good for her. Cause if you have uglyness within, it comes out loud and clear when the mental crap hits the fan. Hope she’s able to work out her inner demons and also treat her mental condition. It’s both.

She tries to hide behind her diagnosis. She uses the mental illness as an excuse while doing nothing to address the pathology.

[…] drugs and alcohol, Azealia Banks, who has talked publicly about her mental health issues remains an object of mockery in the white cultural imagination. And the body that Logan Paul broadcast to millions will remain a […]

[…] drugs and alcohol, Azealia Banks, who has talked publicly about her mental health issues remains an object of mockery in the white cultural imagination. And the body that Logan Paul broadcast to millions will remain a […]