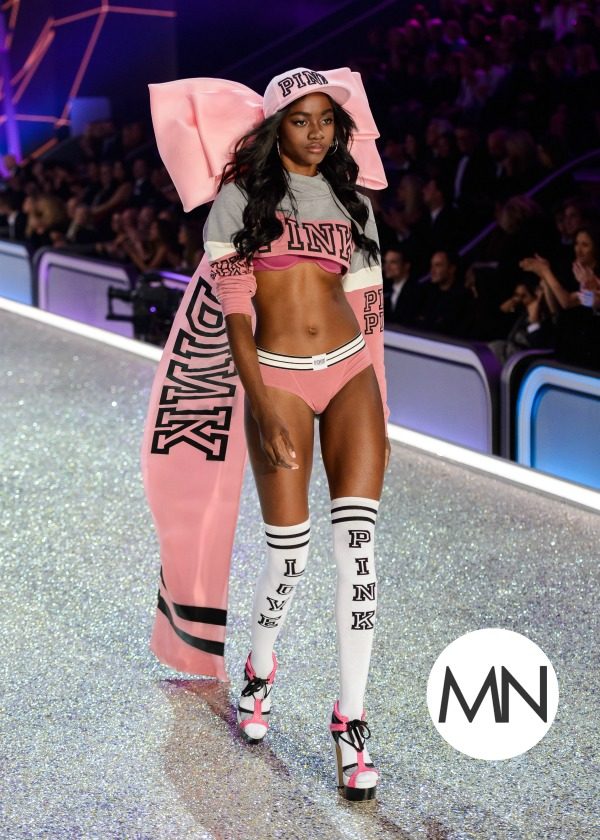 Black women killed it at the Victoria’s Secret fashion show (see all of the models here), but many were familiar faces, including Leomie Anderson, Maria Borges, and Joan Smalls. But one of Victoria Secret’s newest faces, Zuri Tibby, caught our attention immediately.

In an industry where some black models complain, you have to look ‘plucked from an African village’ or ‘like a white girl dipped in chocolate’ to make it, Tibby represents a refreshing celebration of Black American beauty. Here are five facts to know about her.

“It feels really amazing… Joining such an amazing brand is such an honor. It’s really cool to see everything coming together in my career.”

https://www.instagram.com/p/BDEGpV0Sinv/?taken-by=angelzuri&hl=en
2. She was discovered by an agent while walking around the mall after work. She was just 15 and worked at a kids’ play place. In an interview with Yahoo! Style, she recalls:

I was discovered when I was really young. I was 15. I was walking around the mall after work and [someone from my now] agency came up to me. They were kinda following me around a little bit. I was a little scared and shy when they came up to me and gave me their card. I’d never been approached and asked to model before, so it was a shock. They gave me their card, and we set up a meeting. Everything happened from there…

I was working at a kids’ playground. The place that I worked at also had food and stuff. They had a little café. But the rules were you had to wear socks [inside the café], so my funniest memory of it is chasing people, making sure they were wearing socks at all times. I would chase them with socks in my hands — trying to give socks to people. I worked there for probably two months during the summer.

“When I was in kindergarten, I was taller than my teacher, which was crazy,” she said. “I used to get made fun of a lot for being very tall, lanky, and awkward-looking. My height was something I was always insecure about. Now, in the modeling industry, it’s vital to my career and I’m using it to my advantage. It’s something that I’ve grown to love.”

4. She hails from Florida.

5. She modeled with Rihanna for the singer’s Stance sock line, and she slayed.

We love this and are excited to see her work the runway at the fashion show. It airs on December 5th at 10/9C on CBS.

She’s not the first, Sharam Diniz was also a spokesmodel for pink

“In an industry where some black models complain, you have to look “plucked from an African village” …”

My entire being cringed at this… Is that a thing? How does one look “plucked from an African village”?

Exactly. I mean I understand that she might be frustrated by all that’s been going in the industry but really? “plucked from an african village”?

Moreover, there are plenty of girls in “Africa” (in the village, not in the village…) who look like her! I’m sooo confused… I need answers. lol

Congrats to her but she looks very basic and average.

Kudos to her, but I have to be honest.…theres nothing super shocking about her. She’s beautiful, but to me she still looks like another Tyra banks or Joan Smalls. That whole dipped in chocolate look..you know the long wavy weave, but brown skin. Nothing new…but Im happy for her, this isn’t shade. lol

Idk, let the dipped in chocolate girls have their day in the sun.