I’m not going to lie. I’ve been puzzled by Alicia Keys’ #nomakeup campaign for some time, particularly who exactly it’s targeted at.

Even beyond the realm of celebrity you won’t meet many black women who do the ‘pancake face’ routine. It’s not uncommon for professional black women to wear little to no makeup. While many of us appreciate a beat face, the idea that it is necessary to be publicly presentable is not at all resonant in black beauty culture.

So Alicia Keys’ diatribes against makeup and their supposed representations of insecurity and hiding have not only confused many black women, but rubbed others the wrong way.

And now it seems that she was not being particularly transparent. In an interview with W Magazine, Keys’ makeup artist Dotti revelaed that Alicia does indeed wear makeup to enhance and smooth certain features. *Sigh*

“While Alicia rides her makeup-free wave, Dotti is there to keep the natural look looking, well, good. She might fill her brows with individual lashes or enhance her freckles with an Anastasia Beverly Hills Brow Definer. She’ll give her cheeks a warm glow with Vita Liberata Self Tanning Anti-Age Serum or curb shine with Mally Ever Colour Poreless Face Definer Mattifier.”

And there you go…

Keys could learn from Kerry Washington who went “makeup free” on the November 2014 cover of Allure Magazine, but was quick to let her fans know that some makeup was actually used. 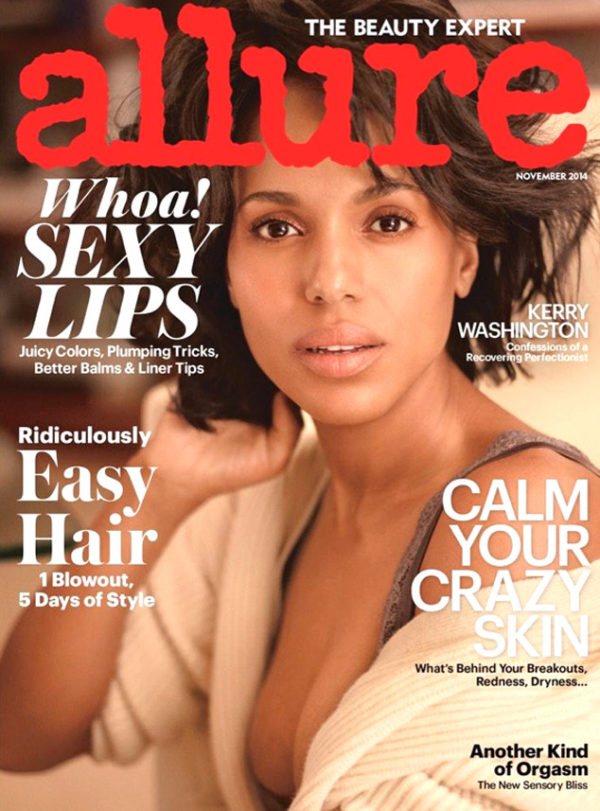 “It is a no-makeup look but I do have some makeup on… I’m going to be honest because I think it’s unfair when we tell women they should look like something that’s not real.”

Exactly. We go barefaced all the time, no big deal.

I never once heard Alicia Keys say that she was against make up. That section should be re-worded. She’s not targeting anyone. She made a choice, made that choice public and didn’t ask for a single person to follow her.

Um, but she IS wearing makeup…

I’m not sure why so many people are up in arms over Keys not wearing makeup. I don’t remember her asking others to do the same; I was under the impression that that’s her choice. Bare-faced or face-full of makeup, to each her own!

But she is wearing makeup…

Okay…great for her! What she chooses to do doesn’t pay my bills or has no bearing on me either way, lol; like I said, to each her own.

I don’t think Alicia Key’s intention was to mislead the public. She made a statement about what she was doing and how she was feeling about makeup and people ran with it. She can wake up tomorrow and decide to start working full on makeup again. It’s her perogative, her choice. She goes through the same ebbs and flows of life like the rest of us and sometimes you’re just not feeling what you’ve been doing for so long and you decide to switch it up. I think it’s awesome what she is doing and it didn’t rub me the… Read more »

Awesome? I think the point of this article is to point out the slight ridiculousness of her ‘awesome’ act. It’s at best unremarkable because most of us do it every day, AND even those in the spotlight (who are black) do it, with considerably less attention (or drama).

Yep you read right…awesome. I get the gist of the article. I’m stating my opinion like everyone else. I believe it’s everyone else running around making a big deal out of it. She stated what she was doing and why she was doing it…for herself. So for that…it’s awesome. 🙂

Exactly, many bw go without makeup everyday. No big deal.

With all due respect compared to every other star and her previous look — she is going make-up free. I applaud the fact that she is willing to go out looking less than flawless. And I’m at a loss as to how you can describe her self-reflection piece on Lenny as “Diatribes” — a bit of a hyperbole don’t you think?

She is not makeup free.

I think maybe we’re forgetting that Alicia Keys is biracial? Her mother is a white woman. Most of the white women I know wouldn’t dare be caught without their makeup. So perhaps that’s her frame of reference for this “movement” or whatever? I actually haven’t been paying attention b/c I only wear makeup on special occasions. The fact that she is wearing makeup is amusing, but it doesn’t surprise me at all. It’s like the time she gave that interview on a super black-liberation tip talking about how she “wears her AK-47 necklace to represent shootin’ them up” or something… Read more »

Good point. I hadn’t forgotten she’s biracial. In fact, isn’t that the whole point of her making a ‘deal’ out of not wearing makeup? She should really say something along the lines of “This is a big deal because I am half white, and therefore need the stuff BIG time!”.

I thought it was just me! I’m confused as well.

No, not just you. It’s clear many choose to do some kind of mental override when it comes to these types of celebs. There’s so little positive black representation on the female front that some will clutch at anything (or anyone) to ‘represent’ black women, often ignoring those who should be recognised in a positive way.

I don’t think there was a single woman that honestly thought that girl was 100% makeup free. Proactive is good but blemishes last awhile lol! Could she have gotten some kind of something to maybe lighten or removed but the way she has talked about her acne prone skin in the past… that would take a lot of upkeep and she’s a busy woman. It’s not cool at all she’s not being truthful but hey… we know Alicia and how she likes to hide things. :-/

I don’t call that “wearing makeup.” Makeup is usually foundation, powder, mascara, liner and lipstick. I believe the “no makeup” shtick used to mean no eye makeup, but if a matte primer is makeup, then so is moisturizer. It’s still better than the full drag that has become so popular.

“She’ll give her cheeks a warm glow with Vita Liberata Self Tanning Anti-Age Serum or curb shine with Mally Ever Colour Poreless Face Definer Mattifier.” — That does not sound like wearing makeup to me, especially by Hollywood standards. It sounds more like using skin care products. If she were drawing on her brows and sneaking in some concealer, I would understand the uproar. I think her message stands.

I have a Mally Face Definer Mattifier. It’s makeup.

Bare face means just that, no enhancements what so ever. Moisturizer is okay.

What a very petty AF article. Petty, catty and extra for no reason. Lol! First, many bitched and cried just because SHE chose to not wear a bunch of makeup on HER face. Then, people decided to take offense because of their own insecurities and NOW this is supposed to be news-worthy? Just because her former make up artist chimes in? Does her former makeup artist live with Alicia and follow her every move at this current time? How does he/she know what Alicia does with her face when he/she is no longer around her? And quite frankly, who gives… Read more »

So she’s wearing a tad of cosmetics? Big deal. No one pays her mortgage but her. I think those who needs a life, get one because focusing on HER FACE is wasting your energy. She’s fierce! period.

Does anyone in Hollywood tell the whole truth? LoL. We are dumb for listening and believing!

So, this entire article feels disingenuous. It was actually on this site, on a post by “black girl long hair”, that I learned about Alicia Keys and her no makeup routine. That post spoke about her motivation for this change, it spoke about self discovery and it spoke about her need to change FOR HERSELF. Nowhere in that article does it talk about Alicia Keys trying to change other celebrities. Why then, does the article I’m reading right now try to attribute motivations to Alicia Keys that she did not express? As a matter of fact, why are you confused… Read more »

There are biases in this article. Many women would not consider what she applies makeup. Not only that but unlike other black celebrities that have no problem going makeup free for photos (that can be altered mind you) Keys is also going bare face at events (in person) and all around everywhere and anywhere. So yeah! There is a statement!

The “Tanning” is used as a highlighter/contour effect. So it will appear that her skin is radiant and dewey (made up but natural look). While the “poreless mattifier” is used before foundation to close pores. This helps makeup lay smooth. Some of us with problem skin tends to have “craters”/large pores and issues remaining from scarring. I defiantly wouldn’t say this is “makeup free” but it is probably as “makeup free” as you are going to find. Honestly, her job is to look attractive. A way to do so must be found so makeup free Alicia and attractive Alicia can coexist!… Read more »

i don’t think she’s targeting anyone. it’s personal and she’s encouraging to others to join or not. sounds like skin products not make-up, so…

“Even beyond the realm of celebrity you won’t meet many black women who do the ‘pancake face’ routine. It’s not uncommon for professional black women to wear little to no makeup. ”

Exactly! Now I have to hear everyone say I’m trying to be like Alicia Keys. Nope, not at all. It’s always a new trend when famous Black people bring to the world Black behaviors and habits. It’s new to the world… NOT us. Thanks Internet and Entertainment Industry.

LOL as a Mary Kay Consultant I meet Black women all the time who say they don’t wear makeup, as I’m looking at them with lip gloss, eyeliner, and mascara/or fake lashes! What I have learned they mean is no FOUNDATION. End of the day proper nutrition, rest, and great skincare minimizes the need for FOUNDATION, but if you want enhance your fabulous or look flawless for a special event, DO YOU!!! #teamfabulous

The question is what is the make up artist’s motivation for coming out like this?

Man! I wish people would stop hating on AK. She’s trying to do something positive and all she gets is relentlessly torn down. In a world where the kardashisn clan are held up as beacons of beauty and femininity with there majorly makeup caked faces and horrible narcissistic, vain outlook on life, it’s nice to see that there’s one person not buying into that BS. So what if she uses a little cream to help her glow. Be thankful our daughters can see that you don’t need to spend 4 hours a day getting made to look pretty before they… Read more »

I don’t understand what Alicia Keys going “makeup-less” or “makeup-little” has to do with her race, natural hair, or anyone else. I LOVE that she is making a personal statement to do something bold that many don’t have the courage to do in Hollywood. I think of many of the women on television — they wouldn’t be caught dead without a beat face. Kim Fields tried to do a similar thing on the RHOA and it was refreshing to see the women without so much makeup on. This article was negative and focused on assumptions. Let her live. Let her… Read more »

Where did it mentioned race? The article stated that Dottie the makeup artist uses some type of makeup on Alicia, nothing about race.