Saturday evening, Normani Kordei’s name was trending on twitter. Not because she’s one of the most stunning and incredibly talented members of the pop girl group Fifth Harmony, but because of racist bullying.
The 19-year-old singer was the target of many Fifth Harmony fans of the member, Camila. In an interview, Kordei was asked about how she felt about her fellow group members. At one point, she paused before describing Camila but was perceived as “struggling” to find a nice thing to say about her.

“I have love and respect for all four of my bandmates whether you choose to believe it or not. My conscience and spirit are clear. For those of you that enjoy speculating and creating drama that doesn’t exist, please keep in mind that myself and the other girls in the group are PEOPLE, we feel hurt and sadness just like everyone else.”

However, the response wasn’t enough, as ruthless racial attacks against Kordei espoused. Black women are often scrutinized and racially taunted while under the spotlight. The attacks launched against Kordei were no different and downright grotesque. 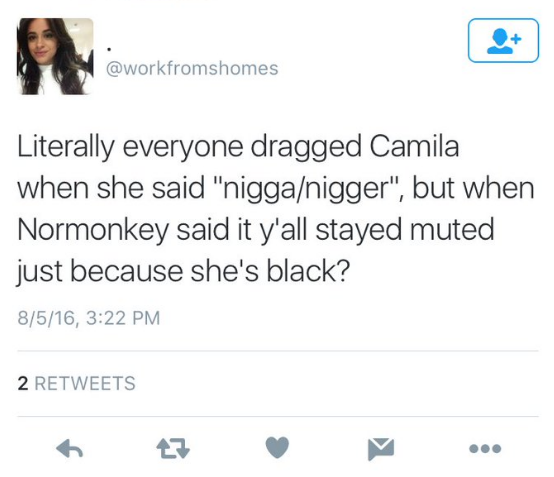 One fan went so far to photoshop Normani’s head being lynched over a slave’s body. 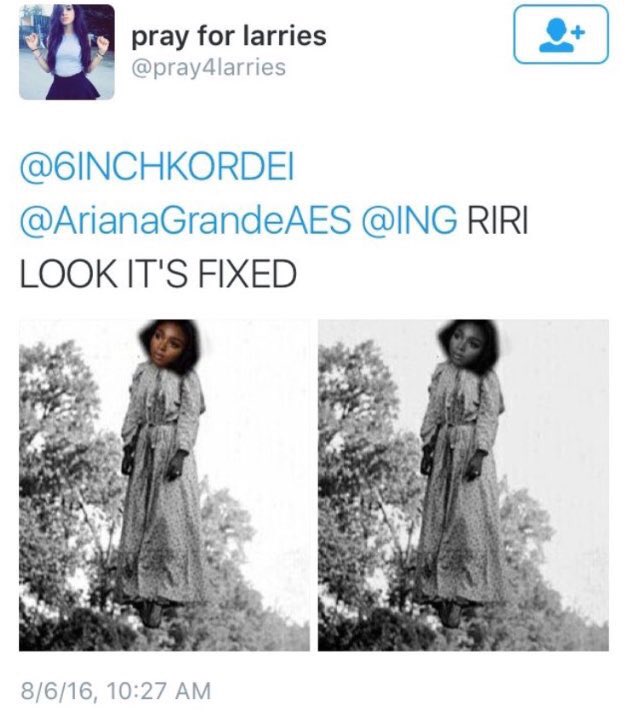 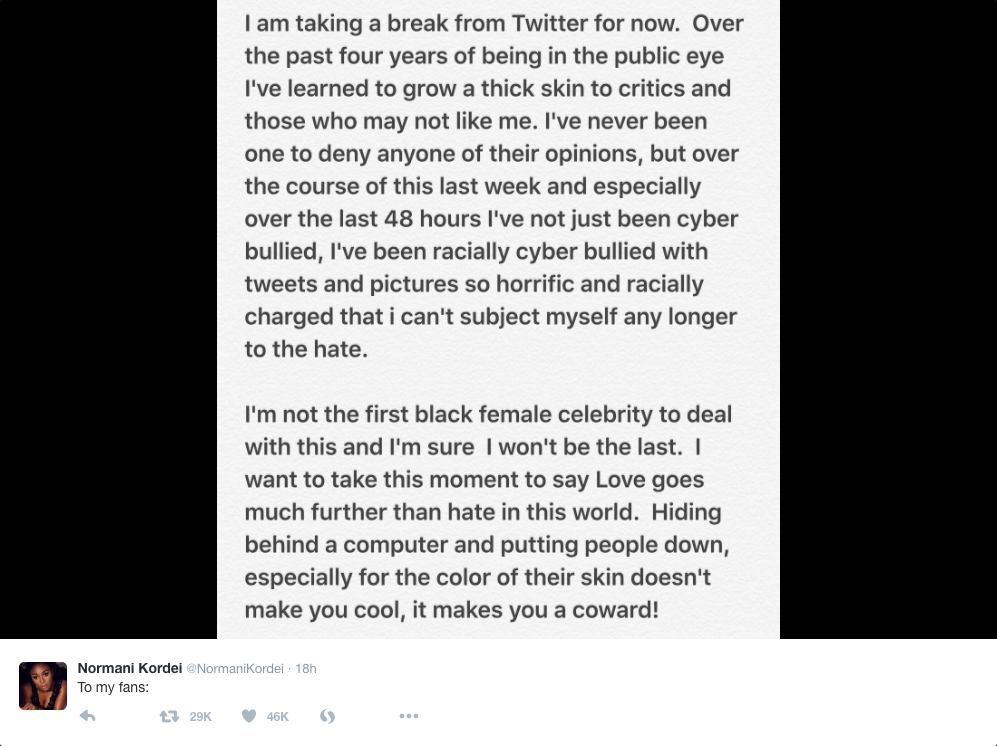 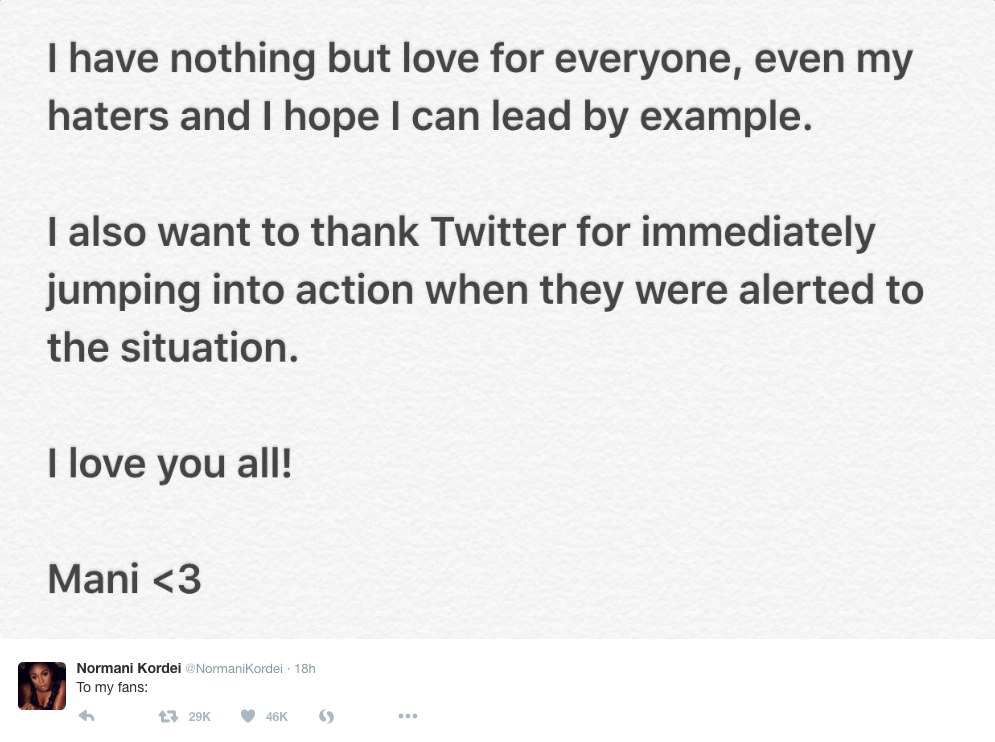 So far celebs like Zendaya and Keke Palmer have showed their support for Normani, but the bulk of her fellow Fifth Harmony members remained silent…

https://www.instagram.com/p/BI1Bv7HgZlU/
Fans even began to demand the other members of the group to publicly speak out in support of Normani with little to no avail.

Shortly after, #IStandWithNormani and #WeLoveNormani began trending in support of the pop singer. 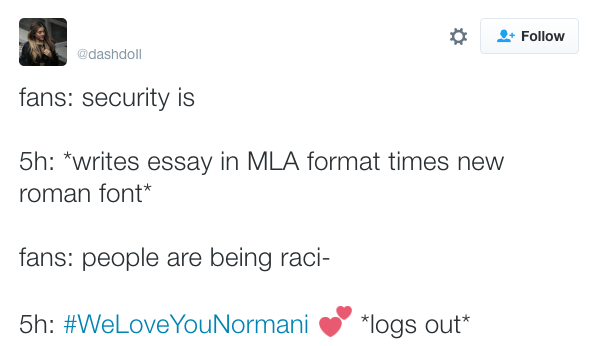 We’re here for and stand with Normani Kordei. We’re just waiting for this amazing superstar to go solo!

This really P!$$es me off!!! Why hasn’t anyone from her group said anything?? Why haven’t they collectively shamed those trolls for their racist remarks??? UGH! I can’t..

They did. Only two of them really addressed it head on though. Lauren and Ally

She should have thank them for keeping her pockets fat. I know if I was in her shoes, that’s what I woul’ve done. Their ignorant comments can be easily thrown back in their face. I would have gone all up in their a**ses. Maybe that’s why I’m not famous lol.

But she can definitely go solo. She can use this opportunity to launch her solo career. She’s talented and she’s in the right medium to make it happen. Music wise, with all the amazing black producers in the industry, she’ll leave H5 and their ignorant fans in the dust.

Most of those ‘amazing black producers’ don’t like black women with Normani’s skin colour though.

Which is why the music industry looks the way it does.

Their go to insult for Blacks. I mostly only see Blacks attacked online like this whether doing right or wrong. NO OTHER RACE is done this way online with every other comment being derogatory. I go through the comments when someone commits a crime and when they’re achieving great things in life and no one is attacked like Black people. I love how one of Normani’s supporters says “jealousy is the tribute mediocrity pays to genius.” It’s true all day every day! They’re mediocre and this young lady is GREAT!

The worst part is that these are ‚what, 10–15 year old girls, who somehow think that racist hate toward Normani is the best way to show support to Camila. Camila really should step up and speak out against what her fans are doing. I mean REALLY condemn what they are doing