A young black woman stood calmly with her feet planted on the ground as two police officers approached her in full riot gear in Baton Rouge, La. Her name is Ieshia Evans and she has become the face of the protest against police brutality in Baton Rouge. 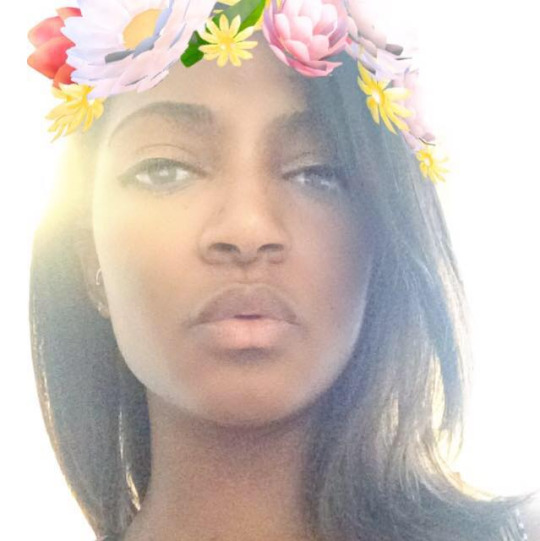 In the photograph, Evans appears graceful and unmoved despite what’s in front of her. Officers arrested 180 protesters in Baton Rouge over the weekend and Evans was one of them. She (and others) blocked the motor way in front of the police department and was told to move out of the street. However, instead of walking away, Evans slowly walked toward the officers prepared to be arrested. She didn’t like the aggressive way that the police were handling the peaceful protesters and  decided that she had enough. Some say that Evans was not engaging in peaceful protesting, but in civil disobedience. She non-violently and deliberately disobeyed a law in order to make a statement. 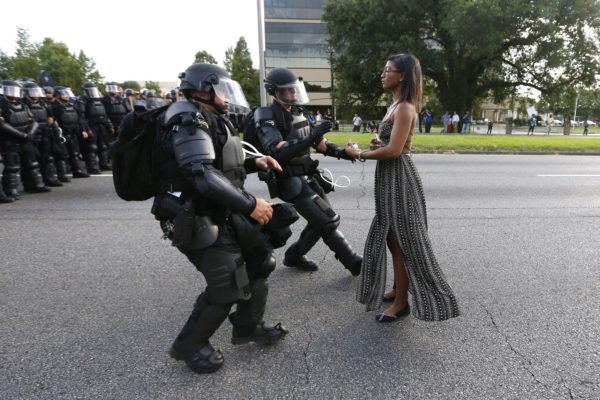 Even as Evans was arrested, she continued to stand her ground. According to photographer, Jonathan Bachman, Evans didn’t resist arrest, she didn’t put up a fight, and there was nothing violent about her removal. Multiple mainstream publications have declared this photo one of the most iconic to come out of this series of protests, and out of the Black Lives Matter movement in general. Here are 5 things you need to know about the woman in this iconic photograph. 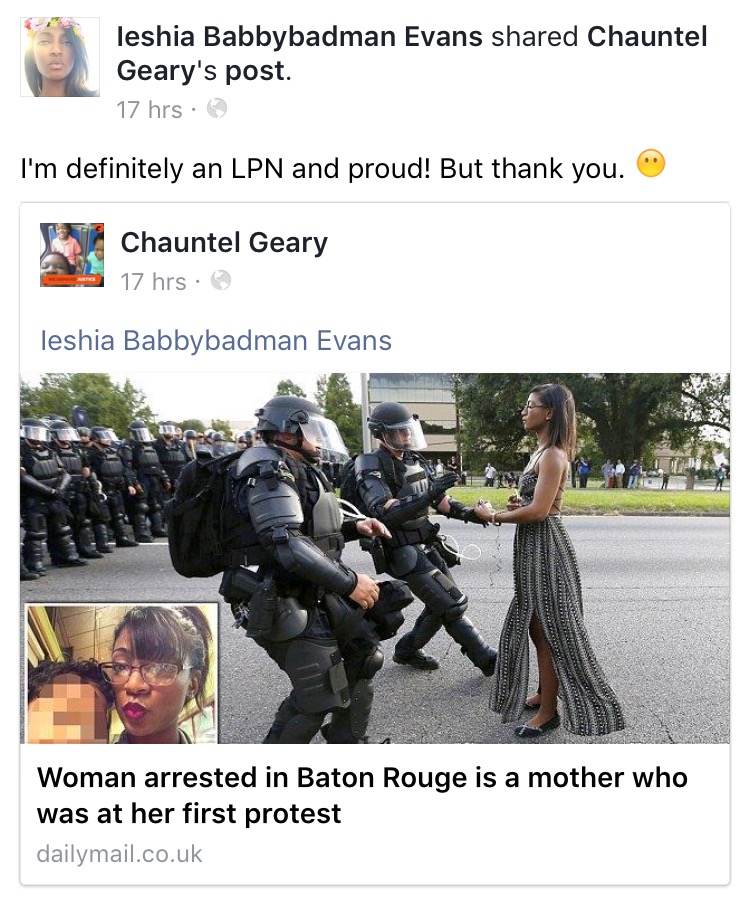 2. She is from Brooklyn but resides in Pennsylvania. She traveled to Baton Rouge to protest police brutality after the fatal shooting of Alton Sterling. Saturday, July 9, was her first time protesting.

“She has a son she wants a better future for.” — a statement given by close friend, Natasha Haynes — Nola.com 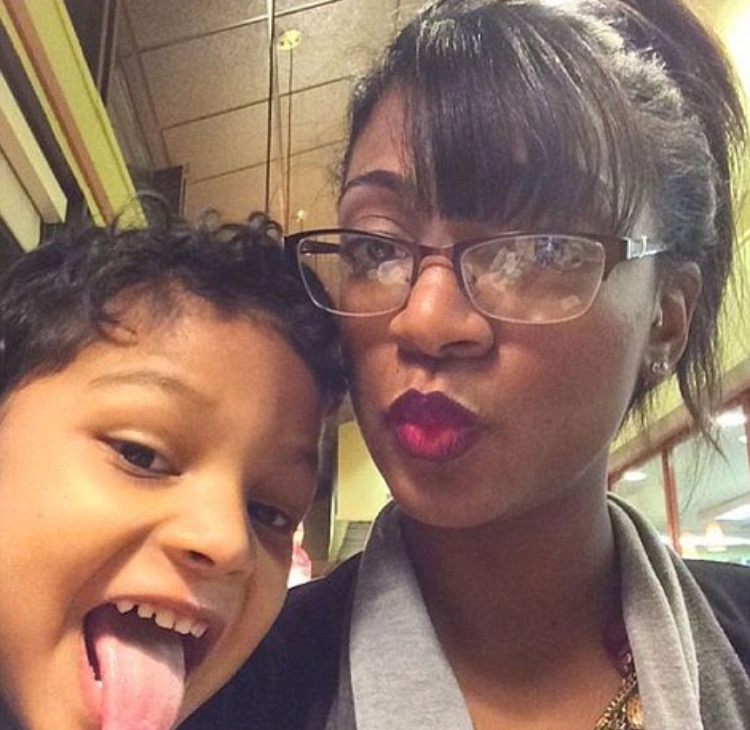 4. Her friends and family support her act of bravery. 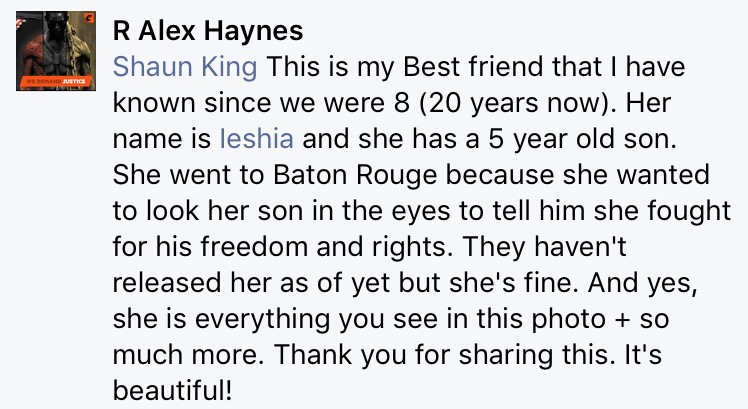 5. She was held at the police station for 24 hours before she was released on Sunday, July 10. 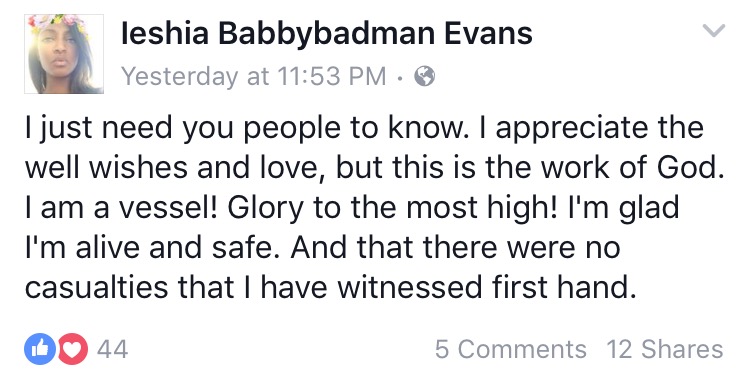 Many are calling her a “modern day super hero” and “iconic”.

I’m sorry, but I hate this photo. Another black woman putting herself in danger for men who do not return the favor. Why wasn’t the child’s father with her standing up.

Thank you!!! I am NOT in support of women risking death and imprisonment over the black male population which has played a huge part in the oppression of black women. Let those black men fight their own battles. Now the nurse has a criminal record and over what? Black men who hate black women? Tuh! You won’t see me or my women and sisters doing the abusive man’s work for him

I don’t even think the child’s father is black. And wouldn’t it be beneficial for her to go since her son is a young black boy growing up in this crazy country? In order for us to be taken seriously, we need unity within our race.

Women fave police brutality as well. So we are fighting for ourselves too.

What? There are black women being murdered by the police as well and this woman has a black son that she likely wants to be safe when he grows up. I don’t understand what the father of her child has to do with this at all. People who truly want equality fight injustice where ever they see it no matter who it is against. And if you don’t believe in that you don’t believe in equality, you believe in supremacy in a different form.

Most of us are tired of of the mistreatment and unnecessary use of force by authoritie!!! She is very brave and shows the the world how it can be done WITHOUT violence on both sides. God bless her to do greater things!

I hope her son has a father figure in his life. Hope she’s married with her son’s father. Sadly, there are many divorced people. She talk’s about God. I hope she, really ALL of us, should know, that God has laws that we must obey.

Unwed teen mother.
Her son is being raised by whoever wanders by while Iesha wanders from riot to riot taking selfies.

Thank God that Iesha is not neglecting your loved one in a hospital room.

Imagine if you were a white cop shot by a Black Panther and Iesha was your nurse.

Her son is 5 and she is 28… Can you do math? How does this equation make her a “teen” mother?
And as a professional, a nurse in fact, with an apparently supportive family, what makes you think her son is being raised by “whoever?”
Your comment is unnecessarily hateful and assumptive.

on her side, good for her for wanting to do something for her son.
On the other side, I’m sick and tired of black women being front and centre fighting for black men who other wise pay us dust! It should be a black man standing before the danger not this teeny tiny black woman. Black men stand up!