Does the Love of Dark Skin on Social Media Translate Offline?

Though dark skin women are getting some love on social media, one has to wonder if this love is translating to offline.  Is there a “real world” equivalent to #melaninpoppingseverely and other hashtags showing appreciation for darker sisters? Is there an offline counterpart to Twitter threads uplifting dark skin women?  While all of this adoration is refreshing to see online, does it mean that there is a crossover into reality?

In some ways, the beauty of dark skin has become more visible offline.  Lupita Nyong’o’s increased exposure as a beauty icon is one example. After winning the Oscar, the dark-skinned actress landed two Vogue magazine covers in 2014 and 2015.  She was also chosen to be the ambassadress of Lancôme, a European-based (French, to be exact) international cosmetics company. Other dark-skinned actresses — including Viola Davis, Teyonah Parris, and Danai Gurira — have also graced covers on national beauty magazines and ads. Nevertheless, these examples are still media, so does that count?

“Both talented and committed, true to her African beauty, and showing a great curiosity and open-mindedness in her career choices, Lupita is by essence the Lancôme woman.  A strikingly beautiful and intelligent woman.” – Françoise Lehmann, General Manager of Lancôme International.

“Lupita’s authentic inner and outer beauty, her exquisite grace, and true confidence represent today’s modern woman.  Having Lupita as a Lancôme ambassadress will help support our mission in the U.S. market which is to speak to all women.” – Xavier Vey, President of Lancôme USA

What cannot be denied, however, is that there are spaces in which dark skin has remained “unattractive” offline.  In the hip hop culture, for instance, song lyrics and music videos that diminish the beauty of sisters with darker complexion are plentiful.  When it comes to movies, dark skin women are typically relegated to non-love interest roles.  Also, one does not have to look far to find a disparaging comment about us on Instagram, Twitter, or blogs, which leads us to the following question: Is there really that much love for dark skin on social media? 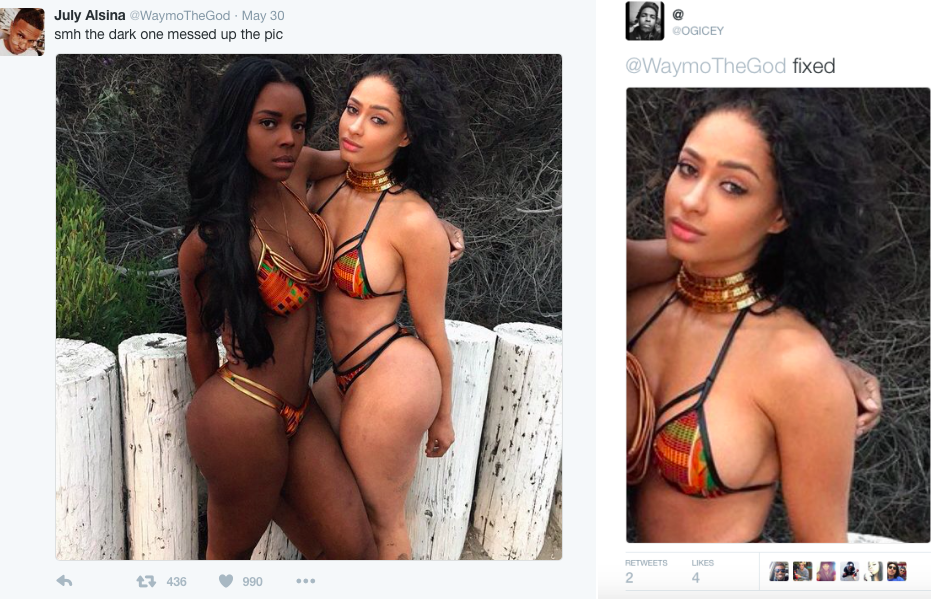 From what I have observed, much of the dark skin adoration on social media appears to come from black women — from us.  We tend to populate the appreciation hashtags with our own pictures or photographs of dark skin women whom we feel are stunning.  (Black model Broderick Hunter is one of very few men who are seen elevating dark-skinned women on social media AND practicing that life offline.)

The start of the online natural hair movement was similarly written off as ‘strictly online’ by many critics and skeptics. Still, black women gathered on forums like Nappturality and CurlTalk and photo-sharing sites like Fotki to celebrate their coils, kinks and curls.

As the styles coming out of the natural hair community became cooler and more and more droolworthy, and the buying power and demand for coil-friendly products increased, culture took notice. Now there are Instagram accounts dedicated to women with natural hair and the men (most of them black) who love them, and the natural hair product industry is making inroads into mainstream beauty and creating a new generation of Madam CJ Walkers. Perhaps most importantly, as the natural hair movement has aged, many who started in it as young girls are now mothers, raising daughters and sons who see kinky and curly hair acceptance as normal. Walk down the street in any black neighborhood in New York, Chicago, Atlanta or Houston and you will see an increasing number of black women going about their business, rocking gorgeous fros, cornrows, updos or twists.

There are indications that the growing dark-skinned movement has similar potential to impact society as more Black women ask, “If the majority of us in this country have black and brown skin, as opposed to fair or light skin, why are we not being represented? And why are we considered the ugly ones?”

What do you think? Is the appreciation for dark skin being translated into real life?

I can only pity the dimwits in the screenshot who felt it necessary to dismiss the darkskinned beauty in preference to her bi-racial friend. We see this all the time in real life too. I am a straight woman who often has her head turned in the street stuck by the beauty of my sisters. Here’s to hoping that one day we will stop saying black is beautiful but demonstrate that we mean it.

Funny, b/c the dark skin woman in the pic looks waaaaaaaaaayyyy better than the light one.. Looking at the avi pic of the man that said she messed up the pic, he looks dark too… I can’t stand men like this… BTW this is coming from a light skin woman with a beautiful dark skin mother!

I know right! I can’t take my eyes off her!

I get what all of yal are saying but the way it’s being said kinda defeats the purpose in my opinion. Maybe it’s just me but when you compliment one thing while cotrasting it against or bringing something or someone else down in the process, it ruins it. You could’ve just said they’re both beautiful black women showcasing that black women are beautiful in all shades. To me, the darker one isn’t more or less beautiful than the lighter-skinned one, just beautiful period.

It doesn’t translate offline, but definitely doesn’t translate online either. Unfortunately I see way more negative than positive comments about black women. You have the guys in real life that actually love dark skin black women, who don’t stand up for them, but are usually the first to try and say that not all black men think that way. And also the the ones who are so pro-black online, but are the furthest from pro-black in their dating choices in real life.

So pro-black in everything apart from their dating choices … that’s practically all my contemporary male relatives and friends, smh with embarrassment for them.

When I was a little girl I was always teased about being dark skinned. That was very damaging to my self esteem. Now those same people come up to me and say that I am beautiful and they love my skin. But how I was teased as a child will always be in the back of my mind. Very confusing!!!

May I ask how YOU feel about it?

Dark skin is beautiful, all rhat extra melanin helps in the aging process not tons of crows feet and deep wrinkles. The slave masters started this lie but sad to see that many blk ppl believed the lie and are victims of this brainwashing.

Natural Power of Her Blog

I think it’s not being represented well offline and it’s truly sad to see. We can do what we can to change peoples views and raise our children to know they are beautiful. There will be some ignorant people in the world but our children will to be taught to continue to stay strong and fight in the right way for what’s right. Black women have so many different and beautiful shades that are beautiful that it’s hard to see people think one is better than the other. I think We are slowly but surely getting there on an offline… Read more »

Don’t forget when it’s “not ashy”!

And when the woman is thin and conventially attractive.

Bravo this is very true!! You never see celebration of woman with my nose (wide) hmmmm you have a poiint

But the darker girl standing by her friend is clearly prettier!

And im white saying this.

Her features are prettier.

Very sad that it’s mostly Black men doing this, especially in the example above when Beavis said the dark-skinned woman “messed up the pic” and Butthead cropped her out. I’m not surprised. Black men project their insecurities on-line through memes and stunts like this and unto us. They worship and praise light-skinned girls and White girls, Asian girls, etc. But those women aren’t paying them no mind. *Kanye shrug* I don’t have time for their games and insecurities so I don’t date them anymore.

Hell, I don’t even see the love of black women in real life.

Man, I refuse to pay these self-hating douches out here any mind. We just need to keep acknowledging our beauty both on & offline–those who are too brainwashed to accept it will just get left behind! The “brother” who claimed the dark sista “ruined the pic” is a classic case of a self-despising idiot who doesn’t even deserve our energy. Because who’s checking for someone with THAT type of mentality?

But the darker one is prettier than the lighter girl! Way prettier!