24-year-old rapper Azealia Banks found herself in hot water on Tuesday when she body shamed Disney Channel star Skai Jackson, who is a full decade younger than her. Banks, who is known for being reckless on social media, went back and forth with the young actress in a series of vicious tweets.

The feud began when Banks went on a rant attacking another musician, Zayn Malik, for posting a video that she believed was influenced by her work. Most didn’t give her rant a second thought, until her tweets became racially charged.

In her venomous tweets, Banks called Malik a sand n****r and labeled his mother a “dirty refugee who would never be granted asylum”. The former One Direction band mate turned solo artist, whose mother is English and father is Pakistani,  was left confused as to why she was targeting him. 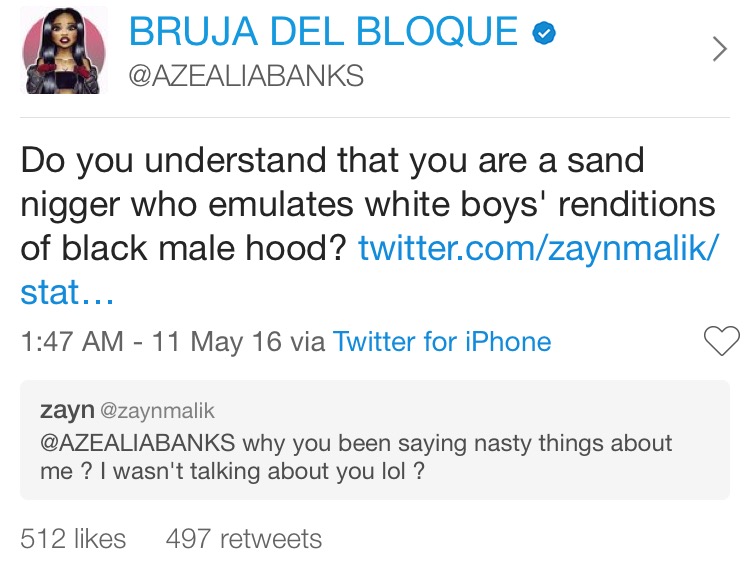 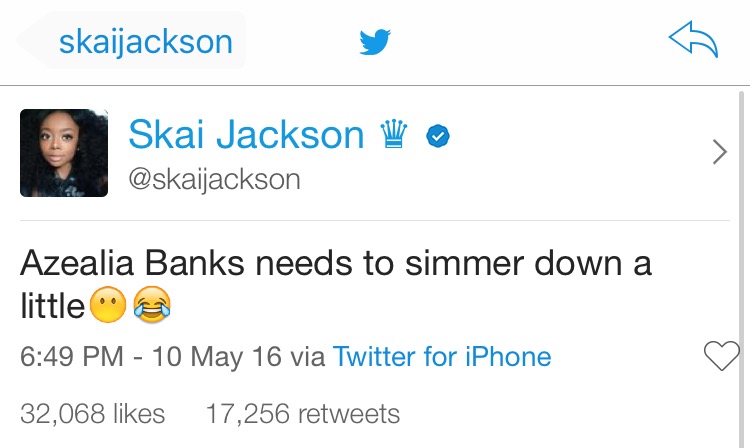 And cue Banks’ disgusting attack on a 14-year-old teen, including saying that she needed to get her “ass” and “tits” done. Jackson was not shaken, which prompted a Twitter war. Here are a few tweets from their exchange. 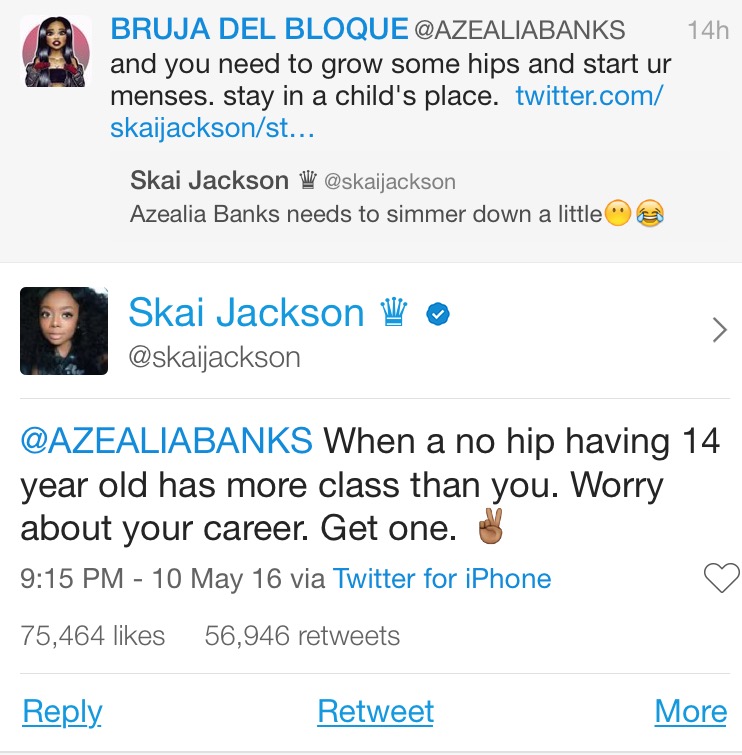 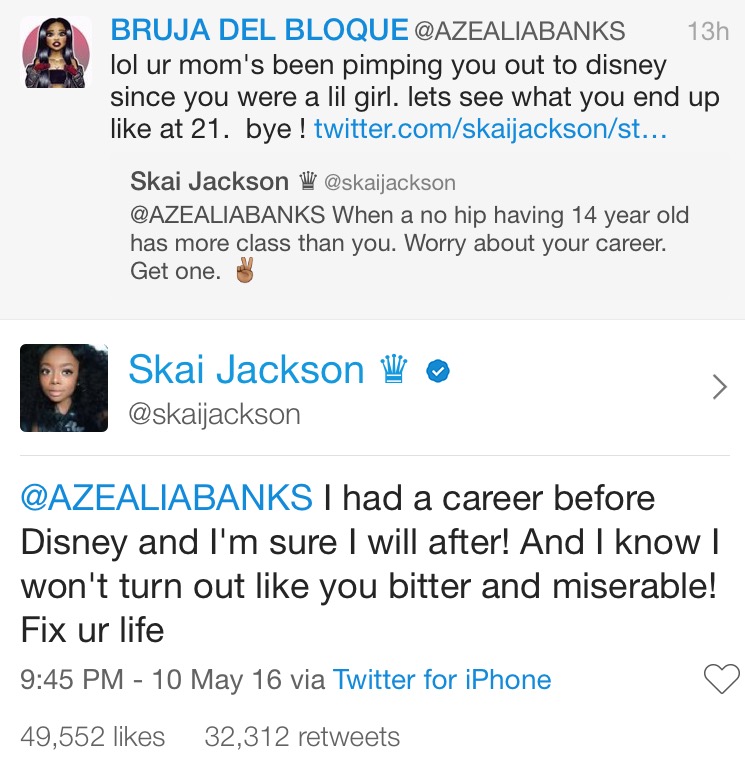 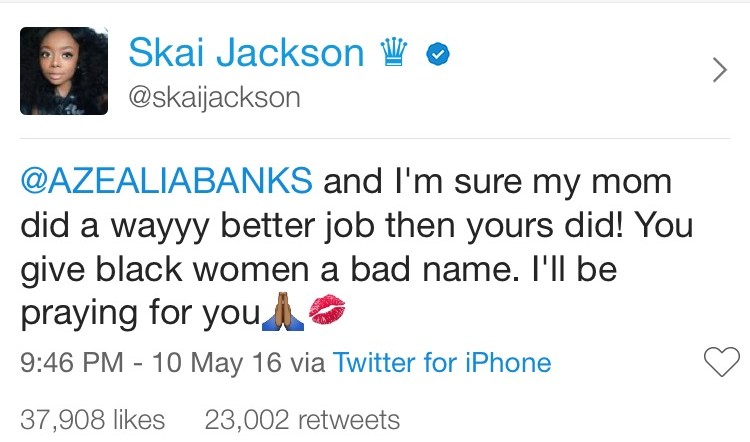 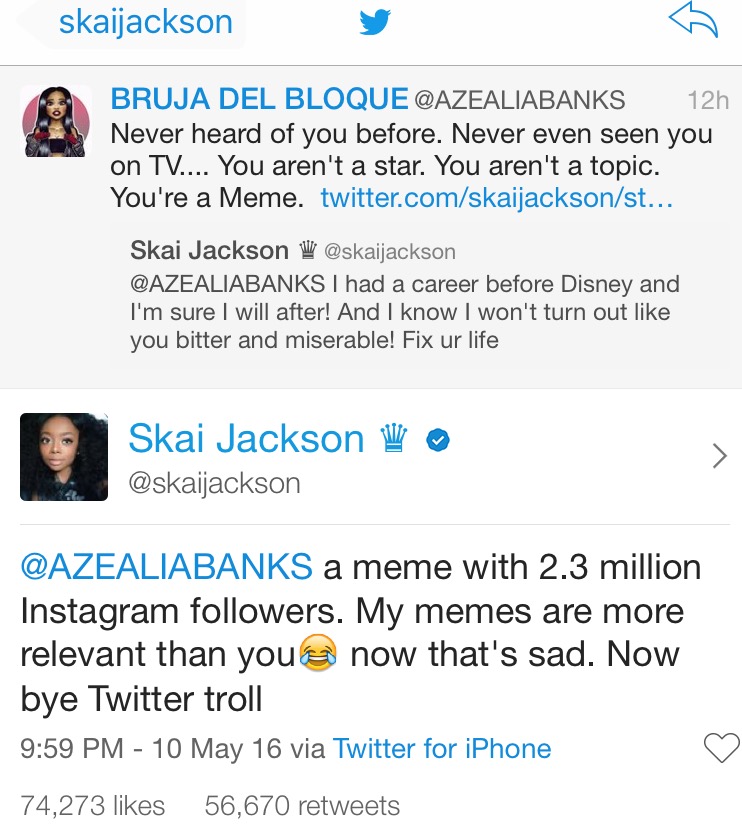 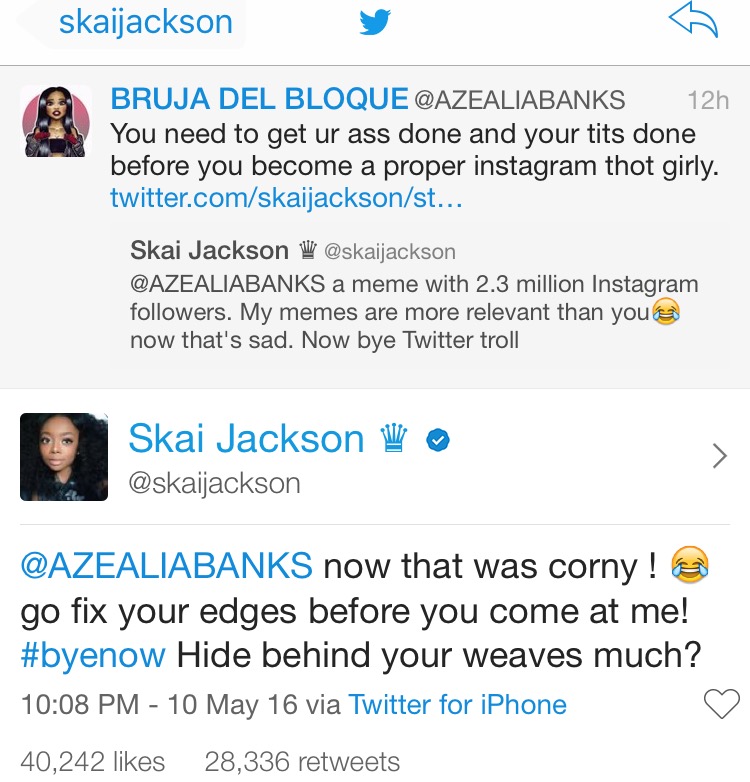 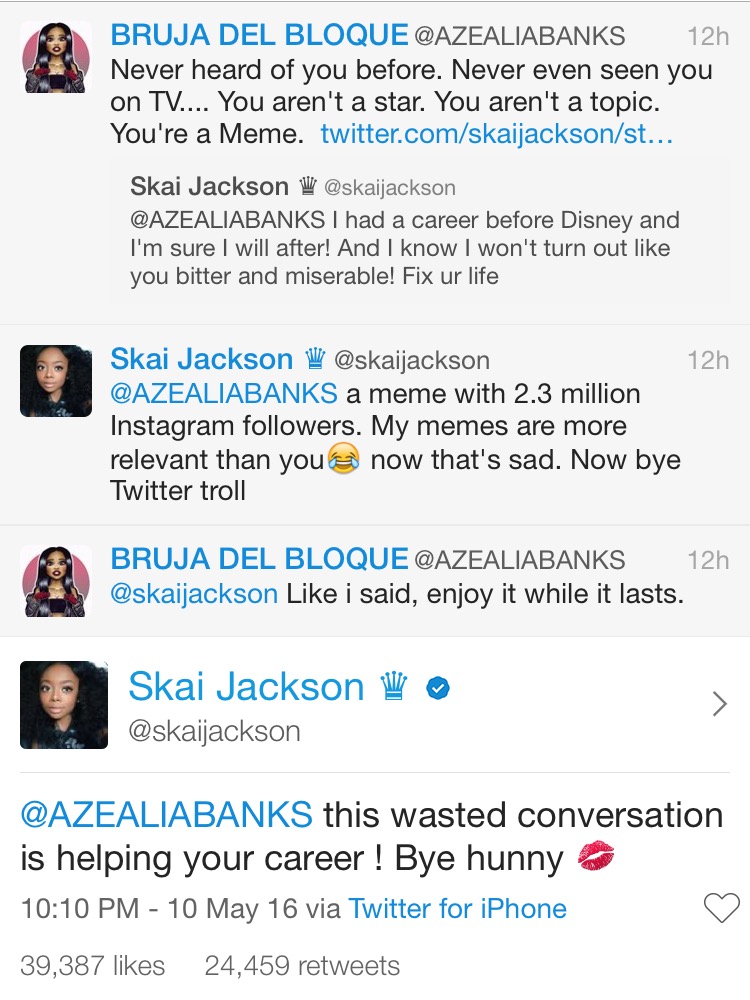 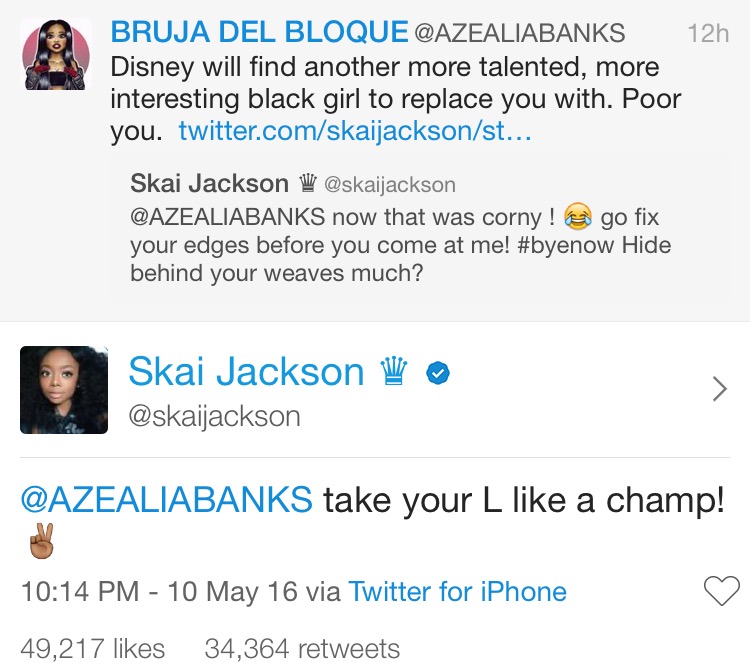 Banks later took to Periscope live to further spew hate on both Jackson and her mother.

When Skai Jackson’s mother, Kiya Cole, caught wind of the nasty exchange, she took to her Instagram account to address Banks and to give her a warning. 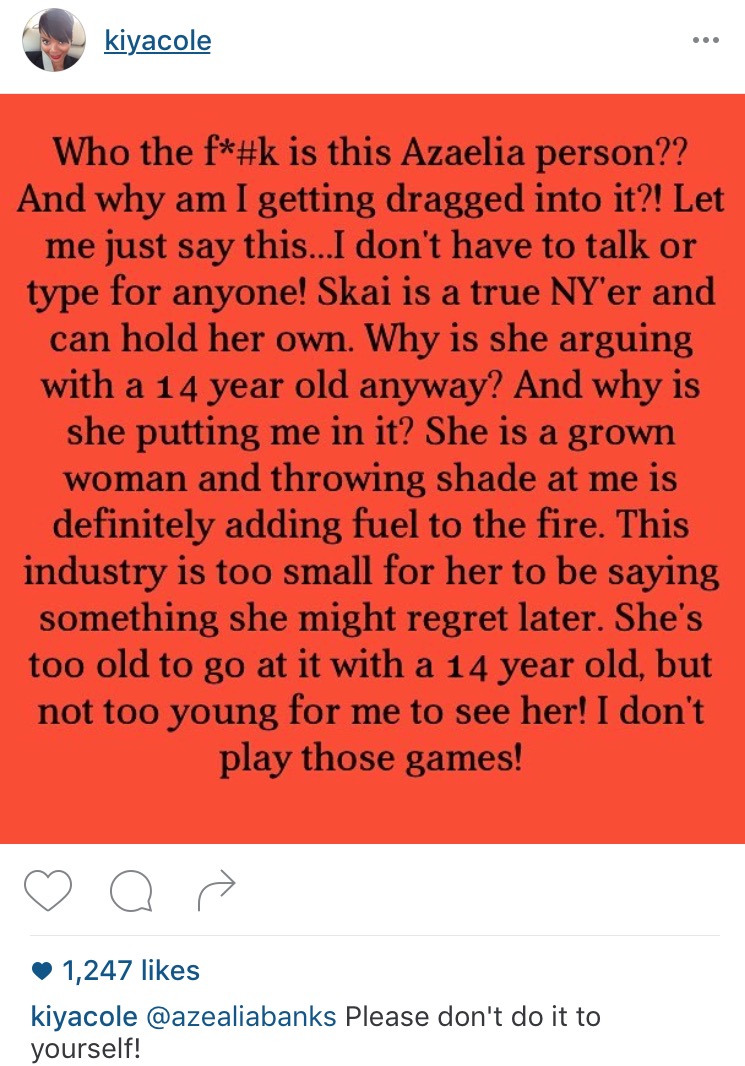 We’ve all seen Azealia Banks go off on rants on social media before and we’ve all probably thought the same thing — she’s an unstable person seeking attention. However, this week she crossed a line that we didn’t think she’d cross. Even the most reckless individuals have boundaries. Body shaming a 14 ‑year-old and spewing racial slurs is absolutely disgusting. As a young black woman in the industry, Banks has a global platform and an opportunity to blaze a trail. But she seems most comfortable viciously ripping people apart in the name of truth-telling.

Banks has since been dropped as a headliner of the London festival Born & Bred after her offensive tweets against Malik.

Banks has issued an explanation for her tweets as of 12PM CST: 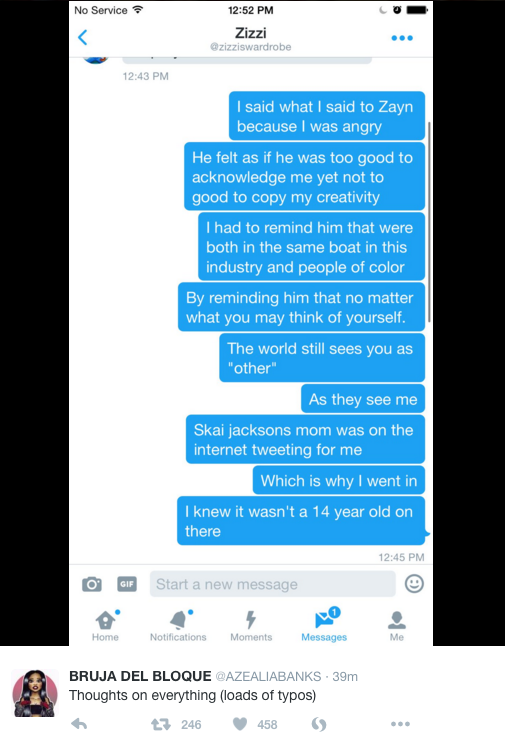 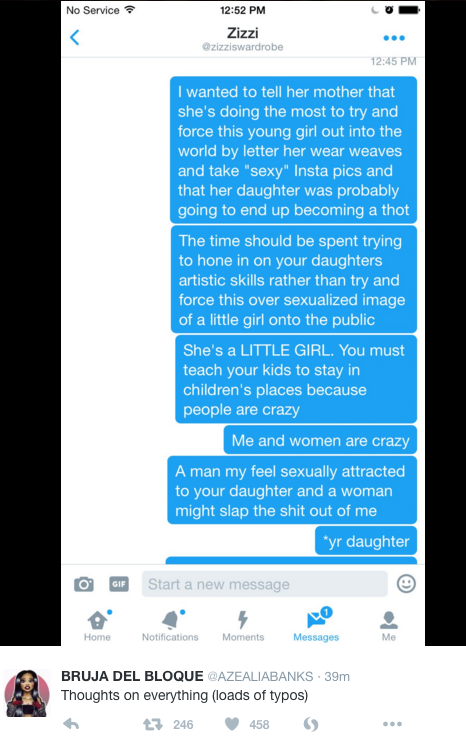 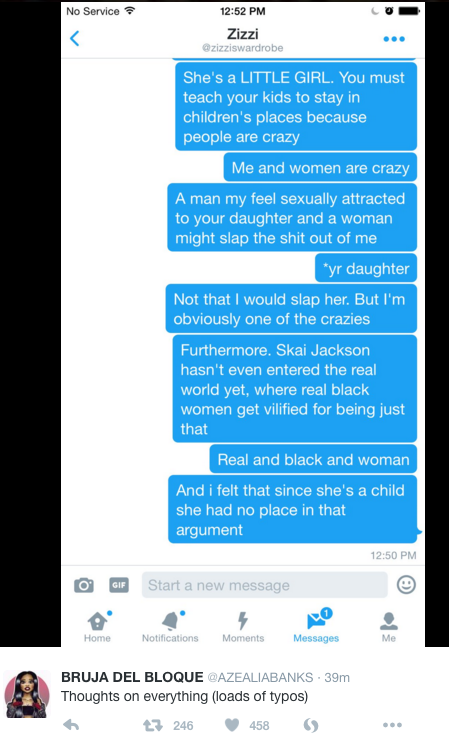 We’re not sure how attacking Skai achieves her goal of warning her about the industry. But apparently in Banks’ twisted thinking it does.

This woman actually needs therapy. Such an Embarrassment.

Azalea Banks is trashy. Am I the only one who wishes BGLH and other media outlets would stop reporting on drunken/high twitter rants like it is breaking news, even for a socially conscious website. Posts like this are ridiculous.

The thing is–even if she was upset with Zayn for what he said/didn’t say or did/didn’t do, she shouldn’t have called him those racist names. Like, her comment about how ‘they’ will still see you as ‘other’ kills me–isn’t that exactly what you’re doing by calling him a sand n*****? As people of color, even if we don’t agree with something another POC says or does, we have to remember that our words are powerful and that we are all ‘other’ in a way. We’re in this together, for reals. Why tear someone else down, publicly I might add, to… Read more »

No one even knows who this Azealia Banks girl is. She acts like her stuff is so super original and high quality that anyone with a thought even similar is “copying her” then “ignoring her” when they say “Who is you?”. DON’T NO BODY KNOW YOU! Anytime I hear the name its always because she’s saying some extra problematic stuff to someone or a group of people. She’s said homophobic, misogynistic (misogynoir too), anti-Semitic, and anti-Islamic things in the past and still doesn’t care. She and other sick minded people like her are the ones sexualizing young Black bodies because… Read more »

Exactly! The ONLY time I’m EVER hearing about this Banks chick is when she saying the most problematic sh!t ever!

the girl is on drugs. the end.

All I have to say is “Wow.” Any adult that would verbally attack a child for a pretty non-confrontational tweet like the one posted really needs help. Very sad. In any case, I don’t even know this Azealia woman. But, I love Skye. She’s a real talent.

Lol Azealia got a bigger jawline than Mike Tyson, why she comin at a 14 year old body image when she can’t even sexualize herself in a way I’d ever want to fantasize about? Anytime I see a picture of her I gag a little bit.

yall realise she’s psychologically unstable, doing this to stay relevant or both. how about this — next time she flares up, ignore her. bet she’ll do it less and less.

We need to UPLIFTED each other! Sometimes, social media can really get OUT of hand! The 14 year old seens to be the adult here.…

Sooo… Banks most likely has Borderline Personality Disorder (BPD). People with BPD are constantly comparing what other people say and do and they apply it to themselves (something they said or did in the past that was barely similar) believing they’re being targeted in some way. Narcissism is a common trait of people with BPD and they often believe themselves to be more talented and important than they actually are. Her accusation of the artist she says stole from her is classic BPD. People who suffer from this mental illness often find “proof” and “clues” in bizarre, unrelated places due… Read more »

Lets be honest everyone knows who Azelia is. Wether from her music or her tantrums in Twitter we know who she is. Regardless she needs to take a seat. But I am glad that she recognizes herself as one of the crazies. She’s an extremely beautiful woman. I really wish that she carried herself with more grace. We’ve all got a bit of crazy in us, hell in way up there in the scale. But the key is knowing when and who to share it with. Those crazy thoughts should be kept within her “squad” and not the entire world.… Read more »

What is the point of AB? I was really rooting for her after “212” but she is so irrelevant and sad right now. All she’s known for now is fighting on social media. I’m sure she does have some talent and is wasting her time popping off stray bullets. It’s so scatter-brained and no one cares what she thinks. All this venom does her no favors either because she killed her own career.

I have yet to see one article, one, on AB and her music. She got dragged by a 14 year old and wants so badly to believe it was Skai’s mother. I think AB took that ass whoopin personally

Azealia Banks is much like depressed, suicidal thinking Americans Kendrick Lamar and the late Tupac Shakur. All emotionally disturbed Americans who experienced Childhood Trauma, Abuse and Maltreatment during a critical period of their childhood/human development. Sadly, a significant population of American children are INTENTIONALLY, IGNORANTLY or RECKLESSLY introduced to what the late American recording artist and *Childhood Trauma/Abuse/Neglect* victim Tupac Shakur describes as “Thug Life”, an acronym for: *“The Hate U Give Little Infants Fvvks Everyone”.* ~Tupac on T.H.U.G. L.I.F.E. “We don’t need no more rappers, we don’t need no more basketball players, no more football players. We need more… Read more »

She picked the right name with bruja because she is one. A grown woman arguing with a 14 year old looks really idiotic. Even the child knows it.

There is one thing that i do aggree with Azalia Banks…Skai did not write those responses. It was so obvious that an adult wrote those tweets probably her mother, posing as Skai.. but other than that…Azalia does need some help

I was on Twitter when this madness was unfolding, If I was the 14 girl i would have left it at the first comeback and totally ignore AB. She enjoys confrontation to the fullest, tho she was out of control. No need to worry about AB anymore twitter took care of that.

“In the name of truth telling”? What truth is she telling exactly?

[…] points with me the minute she decided to body shame a child (Read about is by clicking –>HERE). I’m not here for her. Never have been and never will be. That being said, I am willing not […]

This chic has issues, plain & simple. She needs serious help.