Yesterday, Lil’ Kim posted this photo of herself on Instagram. The photo immediately went viral on Instagram and Twitter because most didn’t recognize the rap star. When I first saw the photo, I thought it was a white (or at least very light) makeup artist who was trying to channel the Queen B. I didn’t believe that it was actually Lil’ Kim until I saw the image posted on her own Instagram account. I tagged a cousin in the photo and she responded with “Who’s this?” 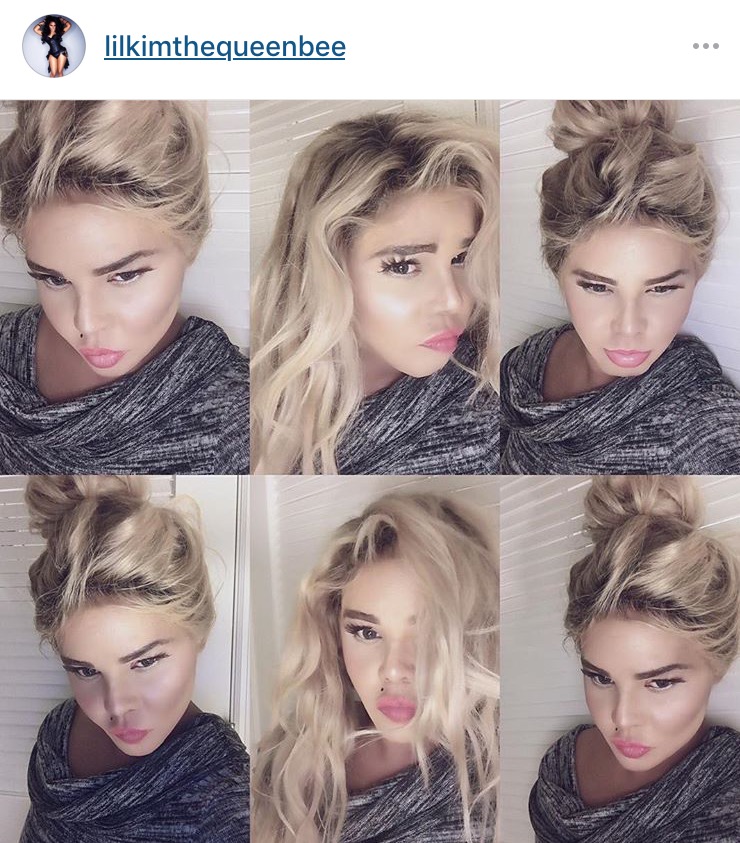 Kim also posted a video of herself and it appears that the rest of her body’s complexion is starting to catch up to the complexion of her face.

Like me, most of her followers were shocked. They couldn’t believe they were looking at the same woman who made the hit “Crush on You” in 1997. While some followers criticized the rapper for her white appearance, other’s concluded that there is a deeper problem at hand. 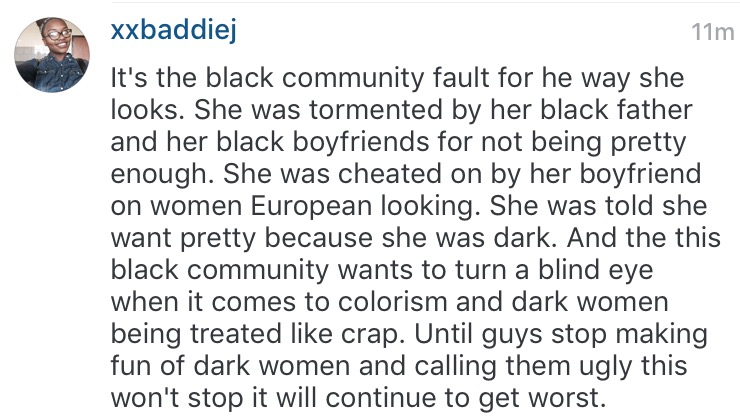 In an article written by Allison Samuels for NewsWeek.com, Lil’ Kim stated that she has low self-esteem and men have never been faithful to her — often leaving her for women who were “European looking”. Men have also told her that she wasn’t pretty enough and after hearing the words so much, it took its toll on her emotionally, and thus her transformation began. 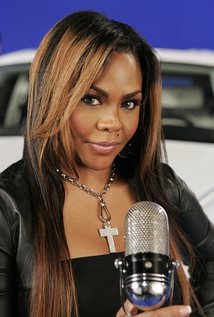 This isn’t the first time we’ve seen a white-washed Lil’ Kim. Back in February, she posted an Instagram photo that she took with Kim Kardashian. Again, people noticed that her complexion was very light. She clapped back at all the backlash and denied that she was bleaching her skin. She stated that Instagram is a way to express yourself through photography and a filter was to blame for the sudden lightness of her complexion.

“The Lil Kim hate is a different type of hate…I lightened up the picture because I like when the makeup pops a little more and you can see the beauty of the makeup that @Tasha_mack_mua did. Kim [Kardashian] wanted to look a little darker, because that’s the way she liked it.” — Naturallymoi.com 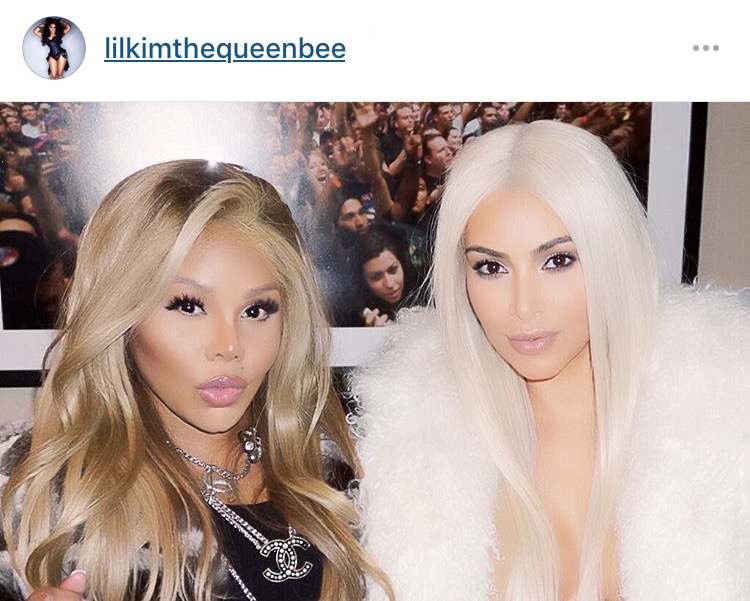 At this point it’s kind of hard to deny that Lil’ Kim’s skin tone has been lightened, especially since there are so many other photos floating around of Kim with a significantly lighter complexion. As of right now, the rapper has not made any statements about the photo.

What are your thoughts about Lil’ Kim’s look?

This is clearly a form of self-hate. I am really wondering who made her think that being black was not enough. It is so sad that she was once an icon for black female empowerment in the rap game. This is shameful.

Her father, and past boyfriends installed this mentally that she wasn’t pretty or beautiful because she is black.

I remember reading something a while back that said that the men she dated would make fun of her skin color and it made her have low self esteem, so because of that she bleached her skin and had plastic surgery. 🙁

OH well. Ppl do what they wanna do these days. If men can try and turn into women–and vice versa– then lil Kim can turn into a white woman, or whatever she wants to be.

I feel like white supremacy has a play on the whole skin lightening trend but colorism is what I think played a larger role in Kim changing her appearance (I think colorism is due to white supremacy though). I always think of how biggie left her for and married the biracial faith Evans. I’m sure there are others cases in which she was sidelined for being a dark skinned woman by other black people. It’s really tragic because she was beautiful with her dark skin and wide nose. We have to uplift each other and affirm our God given beauty… Read more »

she had a wide nose?!
to me it looked like a perfectly shaped button nose that fit JUST right on her facial features. Absolute perfection.
Daing, God done took all this time to make sure it was perfectly made…

Its the black men (and some women) that causes all these problems in the black communities. They themselves are insecure about their skin tone and features that they take their self-hate towards a black women with is darker then them or has the same features as them and criticize and make fun of her b/c of his insecurities. This is why you see a lot of black women doing all this shit to brighten their skin tone, plastic surgery for their nose,lips,etc and usually get a straight blonde wig or weave to look more European. The Europeans are also to… Read more »

Only Europeans are light skinned? There is a FEW BILLION Asians that would disagree with you on that… Of course it’s whites fault AGAIN…

Asians did not colonize Africa for its resources and enslave millions of people, and then force their beauty standards on said people. Pick up a magazine, watch a movie or tv show: the US and most European countries reinforce eurocentric beauty standards by casting predominantly white people and white models. These are the facts, they shouldn’t be hard for you to see

people want to drag her and make fun of her but they purposely want to forget the bastards that sowed the seed of self hate in her in the first place. when its time to talk about colorism and its adverse effects on darker skinned girls everybody wants to look the other way and act like it doesn’t exist . then when shit like this happens everyone suddenly has something stupid to say. the black community is FULL of hypocrites .

We are fine with people changing their genders, but as soon as you change your skin tone it’s “the white mans fault”, “colorism”, “brainwashing”, “self hate” etc…

it’s a variety reasons including colorism, brainwashing and self-hate.

She literally said she had low self esteem from being left for “european-looking” women and constantly receiving criticisms for her looks. People change their genders without any external influence because that is something they feel is right for themselves. In fact, most of their external influences are extremely against being transgender and transitioning.

micheal jackson is alive!!!!!!
plumped up a bit too.

Damn is that a Disney balloon or a woman? I am so sad for her…

Making fun of her looks is adding to the problem!

I wonder if she thinks ‘now I can meet a black man that will love me for I am.’ I think it’s sad that she put black men’s opinion of her so far above her own that she couldn’t see that there are men of other races
who would love every inch of her ‘dark skin’. So sad.

So she pulled a Sammy Sosa!

I always found kim so beautiful before the surgery. She honestly has a mental problem and needs help

There’s no one else to blame but herself, no doubt that she’s severely complexed… Some people just don’t feel okay in there skin, no matter how comfortable we make them feel; too bad for her! Hope it makes her happy at least (#prayfromKim)

Here’s what I want to know: Is this look “working” for her? By that I mean: Is she getting the kind of attention she wasn’t getting when she was darker and presumably “uglier”? Is she happier now? I’m going to take a wild guess and say NO. No amount of body modification is going to give her what’s she missing. She’d have to go back in time for that…back to whenever she first learned that being black wasn’t good enough. Wouldn’t we — those of us who didn’t have ideal childhoods, which is to say many if not all of… Read more »

I believe that the best way out of this madness for her is 1) a better entourage, 2) a vacation (or a pilgrimage) where she can bask in the positive ambience of black culture (black pride), and 3) some serious therapy (where she can actually assess where the root of the problem comes from, which I believe goes far deeper then her romantic relationships). She might also need the 101 on how to take selfies too.