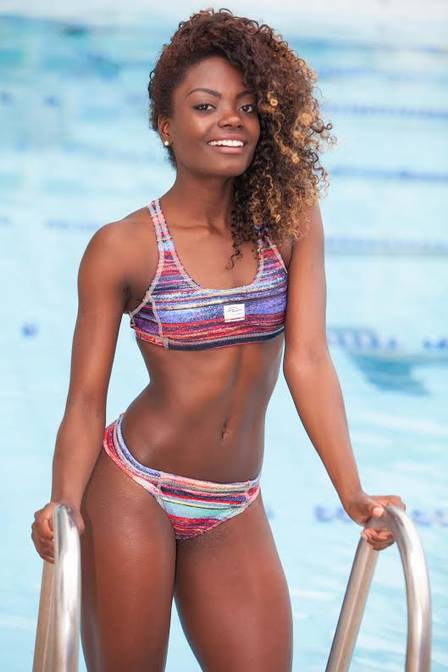 Meet 27-year-old Nayara Justino, an Afro-Brazilian who, in 2013, was selected out of thousands of contestants and by public vote to be Brazil’s next Globeleza. The Globeleza is a ‘carnival queen’ of sorts, crowned by Brazil’s largest television network, Globo, to be a beautiful, sexualized and highly visible representation of Brazil’s legendary carnival festivities. The position opens doors in Brazil’s entertainment industry for modeling, acting and other roles.

In the video below it is clear why Nayara was chosen. She looks absolutely stunning as she sambas for the judges. When she was announced winner, she became the first dark-skinned Globeleza in Brazil’s history.

But it wasn’t long before the backlash began. After her first Globeleza TV campaign aired, she was called everything from a monkey to a gangster. “This type of woman should be in my kitchen doing the cooking” Nayara’s boyfriend Cairo Jardim says when recalling the tone of the backlash. And it came from both black and white Brazilians.

Shortly after winning the title Nayara was stripped of it and replaced by a fair skinned Globeleza who was not chosen by public vote. To this day Globo has not explained why she lost the title although many observers, including Nayara’s own friends and family, believe her dark skin is the reason.

Nayara teamed up with the Guardian to do a short 9‑minute documentary about her experience. You can watch it below.

this is Brazil, I am not surprised

This is so sad. However she is strong. After all this.

Sad and Disgusting at the same time. White supremacy is a global disease.

Colorism is real! How are you going to hate Black people when YOU ARE BLACK? Brazil holds over 50% of African descent — one of the highest rates in the world for a country outside of Africa.

Terrible! I hope Ford or Whillimena picks her up. Tyra needs to come work her magic!

Do you realize that most Afro-Brazilian men aren’t marrying? That’s is unfair to her.

I’m glad that people will understand that Brazil is a racist country, I was really tired of hearing people saying no “We do not believe that Brazil is a racist country just because the population is mixed.”
All they will know the real face of a country where everyone believed as Paradise of the races! Brazil is more black than people think
either, only that the white racist Brazilians want to make the world believe that it is more white than black!
They don’t have shame in public to call you monkey,ape,ugly and to make funny about your black face! Shame!

This sister should be the face on every beauty magasine as far as I’m concerned.

Thank you for posting this story. We need to know.

YES! I’ve said the exact same thing & a few have tried it w/me to the point that I’ve had to break down different incidents of racism around the world. I don’t understand why some blacks allow themselves to be brainwashed refusing to see that blacks are hated worldwide for simply being black.

[…] You’ve Never Been Told That You’re Too Dark To Be Beautiful, Successful, or […]

[…] You’ve Never Been Told That You’re Too Dark To Be Beautiful, Successful, or […]

It’s heartbreaking, she is a beautiful woman withat an amazing figure. Her complexion accentuates her beauty.…what’s even more sad is the white washing of the Afro-Brazilian culture.

It makes the joyous occasion of her engagement bittersweet. You can see they are marrying for love, but sadly at the same time it may diminish her heritage. I hope they both share equally the pride of their culture with their future children.

Sad but not surprising. Brazil appears to be many years behind in terms of protecting the rights of its non-white people. Globo would not have been able to get away with this in North America (the organization would have been hit with multiple lawsuits, boycotted by advertisers, viewers, gotten a boatload of negative press, etc.). I hope things change for the better and soon.

Wow after watching this, I’m speechless.…… Racism is the worst evil of this world. Nayara is literally one of the most beautiful women I have ever seen, but women like her all over the world are made to feel ashamed because of the white colonial racist paradigm. I am disgusted. We need a global movement, not just an African-American movement. We need to unite all Africans and their descendants for a moment of self-love and uplifting imagery and feeling. This kind of shaming cannot be tolerated anymore! Thank you BGLH for sharing Nayara’s and the Afro-Brazilian’s story. P.S. This is… Read more »