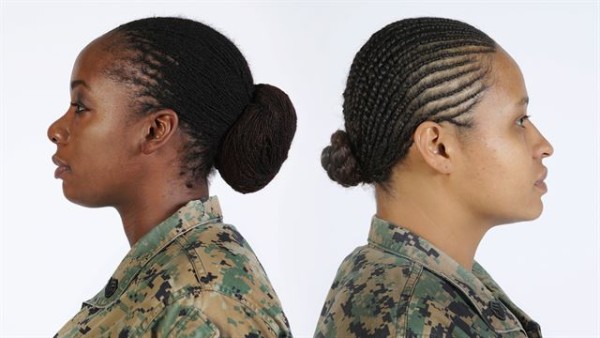 As of December 14, 2015, the U.S. Marine corps allows “entwined” hair styles. Braids, twists and locs are considered entwined styles and were previously met with much resistance by existing Army uniform regulations. The hairstlying policy went under review in 2014.

Colonel Christian F. Wortman states these newly implemented changes are necessary to provide options for women in the Marine corps:

Though, locs, twists and braids have been approved, the styles must still adhere to uniform standards. According to the Marines website:

Lock and twist hairstyles are authorized as long as they are neat and maintain a professional military image. The hairstyles must be secured with no hair exceeding the bottom edge of the collar and not have bulk, other than the bun, exceeding two inches from the scalp. Hairstyles must not interfere with the wear of covers.

What are your thoughts on the Marine core’s new hair styling standards?

Victory, ladies! Wow this is huge. It was even renewed on my birthday 😉 I just started my lock journey last week. I am in the process of getting sisterlocks installed in my long, thick, kinky 4c hair. It has taken many DAYS but we are almost done, and the time was worth it. Here’s why. The decision to lock came after being thoroughly exhausted with “The Process”. The Process consisted of altering my hair to maintain and style it. The Process, starting from washing (and all the way through conditioning, detangling, stretching) and ending in styling, could easily last 3… Read more »

A lot of people are born without hair. What’s your point?

Know who you’re working for. …and if you can’t meet their rules go somewhere else…it doesn’t fit the image of the military. …Some industries those styles might not be a problem..but the military, law firms, etc are not the industries.….I know a guy who loves long hair but he couldn’t do that in the military so he waited until he got out to do it.…..conformity is a huge part of the military. .…Are all natural haired women in the military rocking twists. ..doubt it.…what is wrong with wearing your natural hair loose, long or short? Twa or bunning it until… Read more »

I don’t think you realize that the beauty standard is arbitrary and socially constructed. There is no reason why a groomed natural hair style, which is essential to the health of afro hair (such as twists and locs), should be banned when other groomed hairstyles for white people are accepted. There is nothing wrong with loose natural, twa, short, and long. However, a bun and ponytail are the equivalent of locs and twists, the former for straight hair and the latter for afro hair. Anyone with an afro will explain how problematic a bun and ponytail is for a hair texture… Read more »

Beauty standards? …I have natural hair… I don’t have locs or twists.…and I wouldn’t if I was In the military.….Those cornrows styles, up top ‚look like prison braids to me.…..what image are Black women trying to convey?.….twists and locs are not the equivalent, imo, of buns and ponytails.…can other races sport twists and locs too in the military? Look, I don’t say my view is the only right way or is even smart and these styles are not hurting anyone nor will they prevent anyone from doing the job but they do not fit the image.

And didn’t the military just approve all combat positions for women.….Black women…If you present yourselves manly they will treat you all like men.….America nor the Black community gives a damn about Black women.
.…you all will be cannon fodder, so to speak.….and the women who present as women will be in the back..They will use you all as test cases.

That is a very privileged point of view. Former standards were designed with white hair in mind. These new standards help those with different hair texture meet expectations of professionalism and utility. It is options where there were none before. I trust Black women to appropriately style their hair in what helps them meet requirements efficiently. This helps them and hurts no one.

Even a completely shaved head is a manipulated, groomed style. The only true natural, unmanipulated style is freeform locks. We all spend time preening and manicuring ourselves. To what standard my black body must be manicured should not exclude styles that promote the health of my mind, body, hair, and true self-image.

Ponytails and buns are manipulated styles too. At least braids or twists don’t havhaver to be redone everyday

Lol @ touching up new growth and not allowing it to get past an inch. That glaring detail jumped out at me. Like, really?

Hmmm that video was posted a year ago.

I’m so glad, no ELATED and relieved such an racist policy have been overturned. Having served my country honorably in the Army for 7 years, I wore my hair in a twa, then single braids, and as long as my braids didn’t interfere with my headgear, I was good to go. I’ve been sporting locs for the past decade now since my honorable discharge. I’m so happy for black women going natural while serving our country. We have power and it shows with this major policy change.

Great article. There is a typo above the video it says Marine Core but should say Marine Corps

I don’t know.…and this won’t be popular but twists, braids, locs, etc are manipulated styles…no one is born with twists, braids or locs.…so I don’t think they should have changed the rules.…now if they had a problem with their natural texture whether worn long or short and it was neat and followed military regulations.… then we gotta problem.…but manipulated styles.….….…..