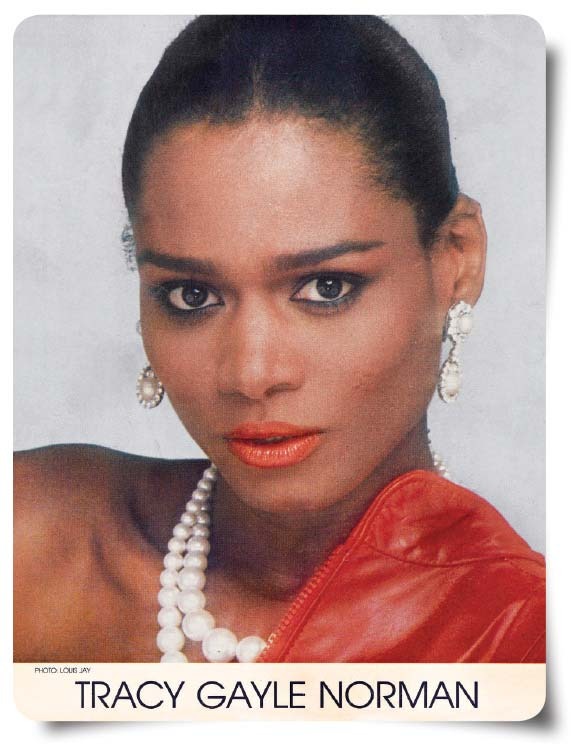 Tracey’s model card from the Grace Del Marco agency, 1991, before she changed the spelling of her name.

She was hiding in plain sight. Walking the runways of Paris and New York and getting large commercial contracts for Clairol and Ultra Sheen. But very few people knew that Tracey Gayle Norman had been born a man and was living her life as a woman — and a high fashion model at that — back in the 70s and 80s. When news got out that she was transgender, her fairytale career came to an abrupt end. But now Norman is speaking out about the incredible life she’s lead. Here are 12 fascinating facts about Tracey Norman’s life, as told to New York Magazine’s The Cut:

1. Before modeling, she thought sex work was her only option because she is a transgender woman.

“Friends from back home in Newark who worked in fashion had been telling her for a long time that she was beautiful enough to model. It would be a better alternative than what she thought might be her only option to make a living: “I was trying to not become a sex worker,” she says.”

2. Before she became a model, she would say she was a design student to get into fashion shows.

“I would just tell them that I was a student at FIT and they would let you in, but you couldn’t sit. You had to stand in the back row and it was really tight,” says Norman. “I would go to see how models walk, because I was still in training.”

3. She got her first job by following a group of black supermodels into a hotel. The job was a shoot with Italian Vogue.

“One morning in, she believes, 1975, Norman was on her way to see a fashion show that Grundy had told her about at the Pierre Hotel. When she stepped out of the subway, she noticed a group of black models she recognized from magazines standing on the corner outside the hotel. She waited for them to go inside, and then slipped in behind them. Through the door, into an elevator. “My mind just kept saying, ‘Follow them,’” she says. Off the elevator, into the next room. Norman made sure she was the last person in line.

“After I got close enough to see what was going on through the door of the hotel room, I saw it was an interview,” she says. Near the end of the day, her turn finally came and she stepped up to the desk, where they asked for her name, phone number, and agency (which she didn’t have). The next day she got a phone call saying she’d been booked for a two-day shoot for Italian Vogue and the pay was $1,500 a day, more money than she’d ever seen. “My eyes popped out of my head!” says Norman. “I couldn’t wait to call my mom.” She didn’t realize until then that the people she’d met at the desk had been an editor from Italian Vogue, Basile designer Luciano Soprani, and photographer Irving Penn.” 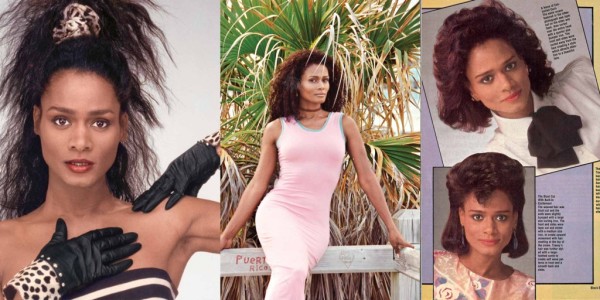 4. She was quickly signed with the agency that represented supermodels Pat Cleveland and Veruschka.

“With Penn’s endorsement, they signed her immediately and began sending her on go-sees, billing her as a younger version of Beverly Johnson, never mind that Norman was only two months younger.”

5. During her career she lived in constant fear of being found out.

“Every day Norman left the house she still shared with her mother to go to a job or a go-see, she would say a prayer: “Please Lord, don’t let anybody disrespect me, call me a name, or try to embarrass me. And please don’t let this be the day.”

How did she pass in an industry where changing in public is part of the job? “Duct tape becomes a girl’s best friend,” she says, slyly. “I had to do other things, yes. I’d like to keep some things private.””

6. In the mid-70s she became the face of Clairol’s Dark Auburn hair dye. It went on to become their highest-selling box dye and Norman’s Clairol contract was renewed twice.

“Norman’s big Clairol moment came in the mid-’70s as well. The company was looking for fresh faces to adorn the boxes of its new hair-dye line for women of color, Born Beautiful, and brought her in for a test. Under the bright lights, her hair had reddish undertones. They snapped photos and labeled her hue Dark Auburn, Box 512, and concocted a hair color to match. She had never dyed her hair, but she had done a home perm to relax her curls, and the interaction of the chemicals and the sun had naturally lightened it to a shade women would pay money to re-create. She signed a contract for two years’ use, with the agreement that she’d get paid more if they renewed, which they did, twice. “So they used my box for six years, because they said it was the hottest-selling box,” says Norman. “This is what I was told.” Thousands of Clairol customers were emulating the look, and affirming the beauty, of a transgender woman.” 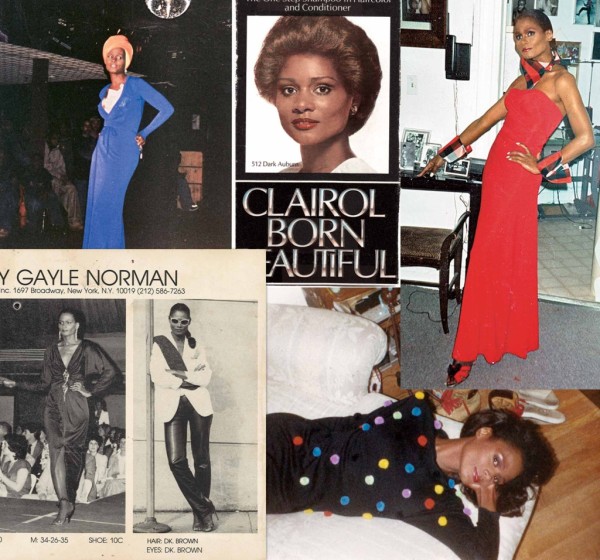 7. She believes she was outed by legendary Essence Magazine editor, Susan Taylor.

“A holiday-issue shoot for Essence, circa 1980. Hairdresser Andre Douglas braided Norman’s hair and beaded it in gold; they wrapped her in an Egyptian cloth. The photographer told her to imagine she was Cleopatra floating down the Nile; his assistant climbed a ladder to shower her with gold flakes. “He was clicking, clicking, clicking, clicking.” The magazine’s then-editor-in-chief, Susan Taylor, had seemed very excited. “She even mentioned, ‘The pictures are so beautiful, Tracey, this could be a cover,’” says Norman. They were on the third roll of film when Norman noticed someone else come onto the set. It was one of Andre Douglas’s assistants, the one who was always asking her questions…

According to Norman, the hairdresser spoke with Taylor and then Taylor stopped the shoot, saying: “‘I think we have enough.’” The editor untied the Egyptian cloth Norman was wearing. She was kind about it. “She was asking me was I all right; she was standing behind me, looking at me in the mirror, rubbing my shoulder, complimenting me on how soft I was,” says Norman. “That’s when I knew. The way that she looked at me through the mirror, it was different. She was looking for the person that this hairdresser told them that I was.”

(Taylor did not respond to requests for comment; both Douglas and the hairdresser who spoke to Taylor are deceased.)

Taylor didn’t say anything explicit to Norman then — or ever. And it’s possible that Norman misinterpreted their interaction. But she doesn’t think so. The next day when she called her agency to find out if she had any bookings or go-sees, they said no. “All I know is that my work stopped that day.”…

Norman claims she was not paid for that last Essence job, and the pictures were never used. She says she contacted Taylor to see if she could at least have copies of them, but “she said none of them came out good,” Norman says. “Later I heard she threatened to sue the agency for false advertisement. But the agency didn’t know about me, either.””

8. Possibly out of fear of a lawsuit, her agency was never straight with her on why she stopped getting work.

“After a week went by, she went in to pick up her check and sat in the waiting area until Zoli himself came out to talk to her. “I said, ‘Is there anything going on that I should know about? Because suddenly I’m not even testing,’” says Norman. “He came up with the excuse that my hips were still too big and I should think about losing more weight.” At this point she was a size 6, the model size of the day. “I said, ‘Okay, I’ll call you in about two weeks when I’ve gotten down.’ I was a size 4 when I called back.” Still there was no work.”

9. When Laverne Cox shot her Essence covers, Norman was on her mind.

“Laverne Cox has appeared on the cover of Essence twice. She got emotional during the first shoot in 2014, she says, thinking of Norman. “I was like, ‘Oh my god, I’m doing a cover shoot for Essence and this is the magazine that 40 years ago fired a trans woman when they found out she was trans.’” She chokes up. “It just means a lot to me that history can be rewritten.””

10. After being outed in America, Norman got steady work in France with Balenciaga then went to Milan where work was scarce. Eventually she moved back to States and got a major beauty contract for Ultra Sheen. But the ad brought on unwanted attention, and work dried up again. She moved back in with her mother and worked at a high end shoe store in Newark until unwanted attention and gawking forced her to resign.

11. Norman eventually got into burlesque and joined the drag-ball community where she used her experience as a model to teach others how to walk the runway. She was embraced in the ballroom community and became an icon.

“She prided herself on using her modeling skills to get her “children” to walk like professionals, rather than in the flamboyant style that was in vogue before she joined. Her own personal trademark move was to walk out in just jeans and a T‑shirt. When she reached the judges, she would pull out a white handkerchief from her back pocket. “And then she’d wipe it across her face and show the handkerchief to the judges [to show that she had no makeup on] and the place would go crazy,” says Garrett.”

12. Norman believes the backlash she received for being a transgender fashion model is completely hypocritical.

“Beauty and fashion is all about illusion,” she says. “So when the doors were opened for me, I walked right through. And then the doors slammed … Once the doors closed, I was no longer a woman and I no longer got the respect of a woman. People who used to say ‘she’ now said ‘he,’ and it’s not who I am and it’s not the person that I identify with. It’s like you, as a person, no longer exist.”

Incredible! Um, where are Ava Duvernay, Lena Waithe and Dee Rees because Norman’s life needs to be turned into a movie right away!! You can read the full incredible story here.

Fascinating (and tragic). Thank you.

What a fascinating story, thank you for sharing it with us!

Wow! This is an incredible story. And I agree, it would make a great movie, similar to Gia Corangi’s story–which launched Angelina Jolie’s career.

What an amazing Trans-woman.

Wow us ‘humans’ are so sick that we would fire or deny work to someone we previously celebrated just cos they’re transgender. What a world. I’m glad things are (slowly) getting better.

Interesting. So this person turned to the gay male community after being ‘discovered.’ Makes sense. These are feminized men, who are usually, but not always, gay. Women, no. But feminized men? Yes.

So many positive comments and this disgusting drivel is what gets to the top. She’s a woman, and thank God, you can’t change that.

Biologically speaking he isn’t.
His feelings can’t change scientific fact can they?
His DNA is male isn’t it?
Everyone is entitled to their feelings, but facts bow to no one and nothing.

This is tragic. Though he is dressed to look like a woman, he still looks like a man dressed as a woman. Ironic too that his greatest supporters are .… women. What’s that about?

Are his greatest supporters really women?