10 Facts About ItsMyRayeRaye, One of the First Black Beauty Vloggers to Hit 1 Million YouTube Subscribers

*In the original version of this article we incorrectly stated that ItsMyRayeRaye was the second black beauty vlogger to hit 1 million subscribers.

YouTube Beauty Vlogger ItsMyRayeRaye  has accomplished what few in her niche have managed: she’s hit over a million subscribers on her channel. Even more impressive is the fact that she is one of the first black beauty vloggers to carry out such a feat (Andrea’s Choice, whose father is Ethiopian and Puerto Rican, has 3.5 million subscribers, check here for 4 more black vloggers with over 1 million subscribers.) 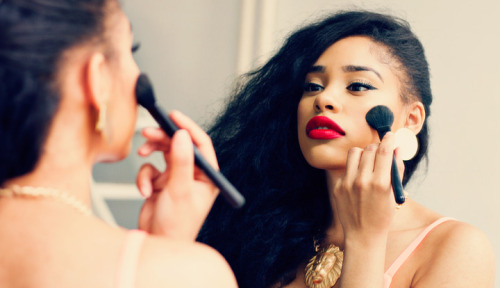 The racial divide on YouTube is clear, with top black beauty vloggers rarely coming even close to the subscriber counts of their white and Asian counterparts, but this 25 year-old Boston native has broken through that barrier. In honor of Raye’s phenomenal accomplishment we thought we’d share 10 fun facts about her:

To learn more about Raye watch this super cute video:

Who do you think might be the next black beauty vlogger to hit a million? Share your thoughts below!

I heart her! She is very laid back, energetic and real. Oh yeah…and she is a beauty!

Sorry she doesn’t look black, this would be big news if she looked like Charay or Iknowlee. When “blacks” that look like her cross over to mainstream its no surprise “they ” accept her because of her exotic looks.…lets get it really.

Yeah, the next black blogger who hits 1 million will have very similar physical traits to her and Andrea’s Choice. It’s not surprising and it is what it is. I know there is a black female youtuber with darker skin, wide nose, etc and with tons of subscribers but sadly she is one that makes a complete fool of herself in sometimes racially charged ways that white viewers love. BGLH wrote about her once, I forget her name. Even with that, I’m proud of Miss Raye Raye she seems really sweet and it’s a serious feat to hit 1 million subscribers… Read more »

I think her name is Glozell.

As much as I wish that wasn’t true, I hate to say it is. Even the other girl mentioned (Andrea’s Choice) looks racially ambiguous. Maybe Naptural85 will get there soon too, even though she’s more about hair than makeup

She doesn’t look Black? She looks Black to me?…because not all Blacks are dark with k inky hair.…is this what you mean

She didn’t deny her Blackness, she said her look/type of Black is the type of look that usually cross over. Which is the truth. Not taking away her accomplishment but I would be more impressed when a “Black looking” will have this type of success.

Thanks you got my point exactly! We all know we come in all shades so someone with her looks achieve cross over success it’s not surprising or news. Now when some who look like me get a million views , call me.

You have a point.…by the way what does having a million or more subscribers on youtube mean?…what are the benefits?.

So what does she look like? Black isn’t just one type of person, there are so many types of black people. Come on now, we should all know this already ._.

There are many types of black people. There are only a few types that are awarded mainstream success. Those types all happen to look white-ish. There’s obviously a lot of cream in the coffee here, and it’s logical to assume that’s related to her success.

Strongly disagree, I see so many shades in the industries. Open your eyes 🙂

Its always black women like her that tend to look mixed that do well in the media and here on youtube.

i love her. she is beautiful inside and out

Go Raye Raye!!! Her and Patricia Bright are among my top favourite beauty youtubers!

I love me some Raye. She makes beautiful videos using makeup I could never try. Yet I watch each and every video. She’s an artist!!! Love her humor and humility. I’m so glad to see positive ppl getting recognition.

Great accomplishment and congrats to her.

You forgot to mention she’s overall a pretty dope person

Hopefully Patricia Bright! I love her and she’s such a great role model.

Why do people insist that colorism doesn’t exist when it is clear as day that it clearly does? Fine, she’s technically black, but when are we going to be able to celebrate the diversity of black people and see representation of our fair skin black to our deep dark black people and not just limit “success” to those blacks that are fair enough to pass or be racially ambiguous? or should just accept colorism and praise any representation that black people get without questioning? Congrats Raye! I love her and Im really happy for her, but lets not stifle constructive… Read more »

I agree, I know nothing of the makeup industry but would like to know are they any popular dark skinned make up artists as compared to light skinned ones?

Pat McGrath is the #1 runway makeup artist and she is dark skinned. She doesn’t do YouTube of course. But Patricia Bright does and she has several hundred thousand subbies.

I think she has stated that both of her parents are black.

No she’s mixed, she said her mom is black her dad is white and asian

So happy for miss rayeraye but teala dunn (African American) and Eva gutowski (her mom is Afro Puerto Rican) have well over a million subscribers.

Thank you for this!

Are they considered beauty bloggers though? Beauty Crush also has over 1 mill

Good for her, I’m rooting for Jackie Aina next https://www.youtube.com/user/lilpumpkinpie05

never heard of her but not surprising since I’m not very into makeup. I seldom watch makeup tutorials. I think should mention that most black women I know are not as into makeup as white women so that could account for part of why it took longer for her to get the subbies. I wouldn’t dream of wearing makeup every day while many white women I know won’t leave the house without it.

anyway I am happy for her success. Looks black to me. shrug.

I totally agree with you about BW’s interest in makeup being not being as much as other women. I follow a handful of black makeup bloggers but mostly I like hair, skincare and fashion things. Also, most BW I know who really like makeup don’t need tips/tutorials about it.

I did some modeling in high school and was taught by professional makeup artists to appply makeup. I’m pretty good at it. Those who taught me to apply makeup were WHITE. So for me I could not care less what shade of black or whatever color someone is in makeup application tutorial.. In my opinion when it comes to applying makeup, anyone who truly knows what they’re doing then it doesn’t matter what color they are. I’m sure in Hollywood the star and the artists aren’t always same race. If I had interest in makeup videos which I don’t, colorism… Read more »

Really I know thousands of black women well into makeup„the fact is black people do not support each other enough,plus their subscribers tend to mostly be black,for Asians,they have the backing of white and Asian subscribers,even mixed women tend to better then black women,its all about appeal and sadly race does come into it.

It could just depend on where you live. Another poster Camille says she sees less interest in makeup among black women as well. Thanks for the insight as I’m clueless about beauty/makeup vloggers. I couldn’t name five if my life depended on it. I’m only subscribed to natural hair vloggers who happen to also do makeup videos (that I don’t watch but see the suggestions). I want to say their names are Beauty By Le and Fusion of Cultures. I would probably be one of those blacks thought to be non-supportive when really I just don’t subscribe for lack of… Read more »

Im on Raye’s Youtube channel and I just love her. I enjoy her tutorials. Amen Marissa, I’m waiting for my next favorite Blogger Jackie Aina to hit it big.

I love her, Raye doesn’t take her self too seriously which is rare for such a beautiful woman. Goofey and fun. Covering makeup trends to clothes and even addressing anxiety issues. I am glad she has reached and surpassed one million subbies.

Good for her. She has a great quality videos as well as a great attitude and seem to be very sweet. But I will admit that her instant rise to youtube popularity in the beginning also had a lot to do with AndreaChoice taking her under her wing. I remember when she received an insane amount of followers when AndreaChoice liked her video, left comments under Raye’s videos and mentioned her in one of her videos. I remember being so amazed about the amount of instant followers. Raye did a video on it a while back thanking Andrea too. Also,… Read more »

I think thechicisnatural will hit a million next. She is a black youtuber and is has over 800,000.

I love her so much! I am so happy to be seeing such great things happening for her. Her ColourPop lippie looks gorgeous!

I’d love for Patricia Bright to go next, I absolutely love her.

I love her! I think she’s such a positive influence on YouTube — her videos/personality always make me smile!

Nice feature, but both her parents are NOT Black. That’s pretty darn obvious from just looking at her, lol. We need more variations in shade with those who become YT stars. But then again, those who become stars (over 500,000 subscribers) have to be “marketable,” and that rarely happens with darker-skinned women on YT specifically (simply due to colorism, racism, racial bias and stereotypes which prejudge lighter tones over darker ones), and also in many media outlets. Let’s call a spade a spade here. I’m her complexion, but I also see the undue shade and disdain cast on brown and ebony Sisters… Read more »

Proud of her. Hope she can be a great example to other black young woman who dream to achieve well in beauty youtubing. She looks humble and easy going. I dont really know many black woman who are doing great at this but I wish them all well and success in this industry. Go Raye Raye Go! Sharon Elsie | http://www.diva-in-me.com