Colorism is still a humongous issue in the black community here in the United States and around the world. Though it doesn’t always feel like it, great strides have been made against valuing people’s worth according to how light their skin is. A shocking February 1966 Ebony Magazine cover shows just how accepted it used to be to unquestioningly uphold black women with European features as the standard and pinnacle of beauty, while erasing dark skinned black women altogether. 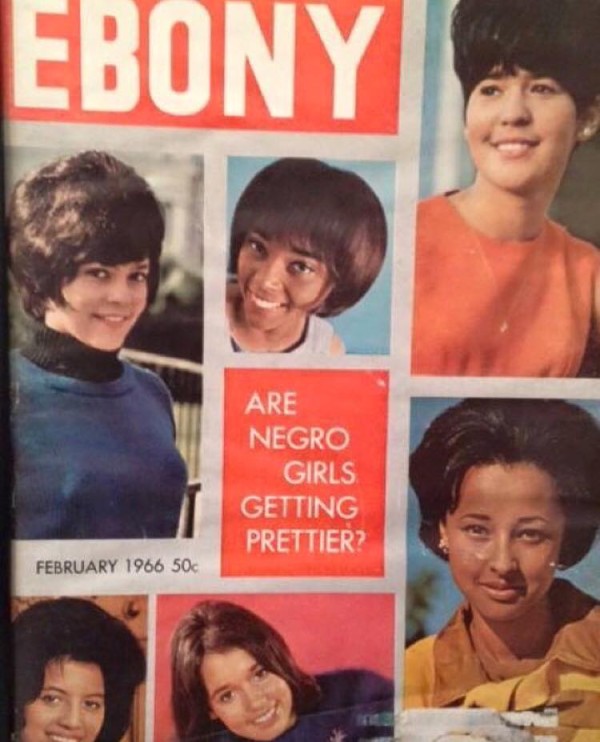 The insane thing is that Ebony was actually PRAISED for this article in its Letters to the Editor section;

“Like a million other young men, I enjoyed your February, 1966 article, “Are Negro Girls Getting Prettier?” Of course, the answer is yes. However I felt the pictures were geared to one area. Except for five, all the pictures shown were taken around Maryland or Washington, D. C. Just about everyone knows that some of the loveliest girls in the United States are from Virginia. Next time, send your photographer to Virginia State. I am sure he will have more than enough pictures, if he only photographs the AKAs there. ‑Thomas S. Brown”

However, there were some detractors.

“How dare you? We Negro women are the only women in the world who don’t get any praise for our beauty. Now you decide to write an article called, “Are Negro Girls Getting Prettier?” We’ve been pretty all along. Just up until a few years ago we had no access to cosmetics, wigs, etc. White women have been using these things for years, and could afford them I might add. I suggest you rephrase your article to: “Are Negro People (male or female) Getting Smarter?” According to the article you published, no — dumber. ‑Miss Gerju Hall

Your February 1966 issue of the magazine asks the question: “Are Negro Girls Getting Prettier?” Why don’t you put some Negro girls on your front page so we can see (instead of the half-white)? Are you ashamed of the Negro girl? Or do you go along with the white man’s premise that a Negro can only be good-looking when he/she is mixed with the white race? ‑Mrs. G. M. Daves

The cover of your (Feb.) issue delivered today made me (and a lot of other people I’ll wager) wince. It should be titled “Are Negro Girls Getting Whiter?” Come to my high school and I’ll show you some girls to photograph who will illustrate, I believe, that Negro girls have always been pretty. ‑Peggy Glenn” 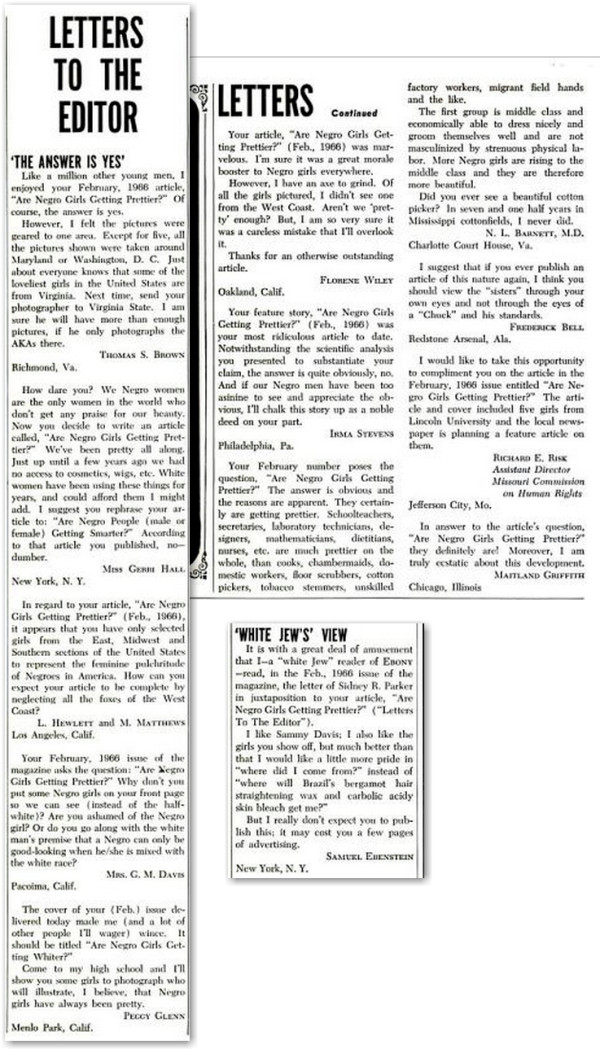 So what exactly did the article talk about? According to a summary from the African American Literature Book Club blog the article discusses African American women’s perceived improvement in “charm and beauty” thanks to better nutrition and grooming including (you guessed it) hair straightening.

The article focuses on the improvements in the beauty, health and personality of African American women. According to a survey, the African American women are considered to have improved in their charm and beauty. The medical specialists think that better nutrition and the grooming knowledge have contributed to the improvement in their beauty. Edward W. Beasley, a pediatrician, states that dancing is good for the development of limbs and is thus advisable for women…

“Experts say better nutrition, grooming, know-how have brought improvement.” Gone, “…are the spindly legs, sagging bosoms, unruly rumps and ungroomed heads that marred many a potential lovely of yesteryear. Such common flaws have been displaced by a feminine refinement, both facial and physical, that has elevated today’s young lady of hue to a place of prominence among the most pulchritudinous.”

I mean… ugh. We’ve come a long way, but still not far enough.

The Ebony Magazine article sounds beyond ignorant, I am speechless SMH.…

The ebony article was disheartening to read. However, I cannot say that I am surprised by the inherent brainwashing of what constitutes beauty in the Black community. Once we acknowledge the Willie lynch letter and its impact on the Black community, only then can we work to “undo” the unconscious/conscious bias that we hold against each other. Our Black is beautiful in every shade, and shape. I believe that we as a people can change our outlook against each other by taking baby steps to speak to one another, smile at one another, and understand that we are enough!!

LOL, sometimes looking back at old memories is an eye opener. My goodness how far we have come and not come.

Ok, that Muppet GIF has me dying!!! lol

Back to this ridiculousness…my dad was a teenager in the 60s and he’s told me how hard it was to be considered attractive if you were brown- or dark-skinned back then BUT some people today are still holding onto this beauty “ideal.” Even worse, it’s a lot of our own people. If Ebony ran a similar article today, I’m afraid you wouldn’t find much variation in skin tone because it’s not exactly the most progressive publication.

“If Ebony ran a similar article today, I’m afraid you wouldn’t find much
variation in skin tone because it’s not exactly the most progressive
publication.”

Glad to see that even back in the day not everybody was swallowing the hogwash that they were being fed.

Me too. I’m more happy about that than anything else. It just shows that, even in the darkest hours of white supremacy, some of us were still woke.

Are you really surprised?

right! this is how it used to be all the time! Such a sad time in our history.

The ebony article was disheartening to read. However, I cannot say that I
am surprised by the inherent brainwashing of what is constitutes beauty
in the black community. Once we acknowledge the Willie lynch letter and its impact on the Black community, only then can we work to “undo”
the unconscious/conscious bias that we hold against each other. Our
Black is beautiful in every shade, and shape. I believe that we as a
people can change our outlook against each other, by taking baby steps
to speak to one another, smile at one another, and understand that we
are enough!!

I really enjoyed the “White Jew’s View,” And I think the best response was that of N.L. Barnett. People still do this. People (ahem, White people) have uttered the “Black girls are getting prettier” statement to/around me before, and it makes my stomach churn. Even we do this on this site, albeit, related to hair rather than skin. I’ve noticed fewer and fewer 4B/C features, icons and profiles, and more ‘curlies’ that could and did probably survive just fine before the NHM. If I see another article about how to get the perfect, frizz-free wash ‘n go, I just might… Read more »

I agree with almost everything you said but it does bother me that there seems to be a perception that if you are not 4bc then someone has had an easy go of it or as you say got along fine before the NHM. My hair is 4a and some 3c and believe me growing up no one was complimenting my hair or ever used the phrase good hair towards me. In my family there are silky, wavy, loose curl types who got all the praise. They were seen as the ones okay to be nat7ral ie not pressed but… Read more »

I’m not counting people with any type 4 in my statement, as 4A/3C folks tend to have a tight enough curl pattern that they had difficulties too. Really, I’m just talking about anyone that was never exposed, forcibly or otherwise to chemicals. I’m talking about people that never saw their curl pattern until adulthood because they didn’t know they could wear it. I’m talking about folks who never had hair past shoulder length until they went natural. I’m taking about people who can’t get by with just wash and go’s if they’re trying to retain healthy length. I’m not saying… Read more »

Preach it some more

You need to punch those people. Hard and preferably with a chair. No one has the right to say things like that. It’s mean and it’s uncalled for. That said (and I really didn’t mean to make her feel uncomfortable) I did compliment a dark skinned woman on her skin about two years ago. In my defense I didn’t mean it to sound racist, she really did have lovely skin and it’s not something I haven’t done to lighter skinned women (and men). She got really cross and I got to spend the next thirty minutes explaining to her and… Read more »

I have always been complimented on my dark skin, and for good reason: it’s in really good condition most of the time. I credit both genetics and a skin-care regimen that didn’t seem like much when I first started but apparently (as I learned years later) was more than most 14-year-olds were doing. Plus (and again, this is ALL about the genetics) I come from a family full of “good black don’t crack” folks who are proud of their dark skin. Sorry that she got so cross.

I completely agree. Esp with your comment about this site. SO many loose-curls and not enough kinks in a space that is supposed to represent us all. It’s disappointing to me, with all the good this site does.

There are no words.…

I looked at the cover. The comments weren’t encouraging. Why don’t you state the obvious for me :-).

Look at the cover, read the article, read the letters in response, and compare them against the article and letters described in this post. Note that all of them published in the same year, 1966, a year in which seismic changes were taking place — outwardly and *to some extent* inwardly — in black America. There is this mythos surrounding the 60s that I find people who a) weren’t alive back than and/or b) don’t read or study history like to cling to for some reason. Like somehow all black folks all of a sudden got collective self-love and started… Read more »

I followed your lead and just finished reviewing the June 1966 Ebony article “The Natural Look,” along with the comments that followed in the August 1966 Ebony. Although some of the comments were highly offensive and inflammatory, I was happy to see that the late icon Ossie Davis beautifully summed it up in one word, “Marvelous!”

i thought the same until i realized that all the women were actually just extremely light black women or mixed women. i think thats where the offence comes in at, besides the uber rude question, its the misrepresentation.

An Ebony magazine. How ironic. I see nothing ebony about this cover.

I say “BOOM! *drops mic and walks away* ” to those rebuttals though. I know we are all discussing race, but can we discuss gender for a moment? I wish there were rebuttals this strong in favor for black women’s beauty from black men. RIP to the commenter Irma Stevens. Her response was gold.

Not sure what the cover is supposed to illustrate, because out of the of the six women on the cover, I think I see one actual negro :-/

This article whether written back then or now is utterly ignorant! As a black woman, we are never acknowledged for our natural beauty and still looked down upon for our dark skin. But, nonetheless our dark skin is beautiful and glowing with or without approval by those that don’t share our melanin!