Singer K. Michelle is Removing her Butt Enhancements to Return to Her “Normal Shape” 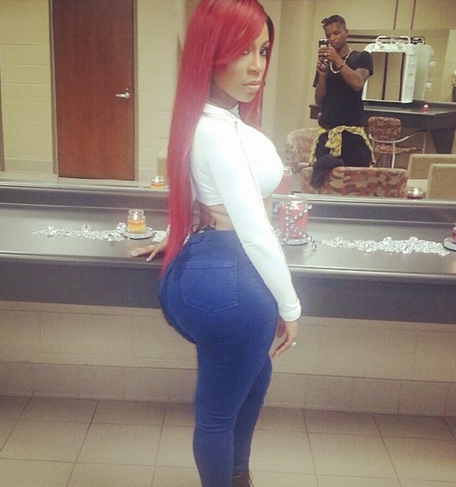 Don’t be shocked if certain areas on K. Michelle’s body suddenly look much smaller than you remember. The singer and songwriter surprised her fans when she admitted that she no longer wanted her butt enhancements. In a sit down interview with celebrity blogger, B.Scott., K. Michelle, who is known for her shapely posterior, stated she came to the decision after speaking with friend and actor, Tyrese Gibson. While she makes it clear that she loves herself, she admitted that she believes she’s being typecast because of her large bottom. She thinks that removing the enhancement will be the best decision for her career.

“I have like movies and different things [I’m working on], and I was having a real conversation with Tyrese — we’re really like great friends. I was telling him about my butt, how I hate being typecasted because my bottom is so heavy — not saying I don’t love myself, but…you know.
For me, I want my normal shape back. 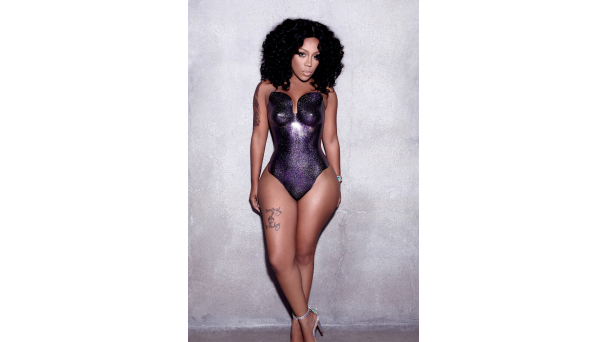 The songstress stated that she’s always been curvy with a shapely bottom, but she wanted an even curvier shape, which is what prompted her to seek butt enhancement via fat transfer. Now, that she’s a little older, she’s over her large booty and is tired of businessmen only looking at her derrière in meetings.

Getting into designer clothing was also an issue for K. Michelle. Having a small waist, large hips, and a large butt made it hard for her to fit into certain things. B. Scott even admitted to immediately focusing on K. Michelle’s very prominent asset in her Instagram photos, instead of her face.

“When I look at your pictures on Instagram, it immediately goes to the ass. You can be looking so beat and fabulous, but it upstages you,” said Scott.

In a world full of women who are constantly adding, nipping, and tucking, K. Michelle’s got a bit of advice for young black girls who are seriously considering getting hip and butt enhancements.

“I would say if you have the coins to put it in, have the coins to take it out. That’s really what I would [say]. No, really — because it might be a phase! I would tell [other girls], don’t go and do what you see people doing. But, if that’s what you want to do — if that’s the body you want — go get the body you want! Nothing is wrong with it. But, if you won’t want it anymore — you just don’t want it anymore!” — K. Michelle

K. Michelle has never been shy about the plastic surgery that she’s had. In fact, she even stated during an interview with Vibe magazine that she was proud of her fake booty. It’s interesting to see that even when you make up your mind about the body that you want to have, you can still think differently later on. Choosing something as permanent as implants, fat grafting or fat transfer, sure is an expensive phase.

What do you think about K.Michelle’s move to undo her cosmetic procedure?

I don’t know what she does or even who she is, but I applaud her in making a bold decision to reverse (an unwanted change) plastic surgery. I think you should do what you like to your body and also have the right to make changes when the moment hits.

I personally think it was brave of her to step up and admit this to the public. This whole big fake booty movement has gotten out of control in the entertainment industry. Now, maybe more celebrities might see that this booty crazes is not all its crack up to be, and that everyone is not meant to look like cartoon clones. Go, K, Michelle, dare to be different !!!!!

Bold decision to reverse it? The nut job never should have had them installed in the first place.

You know sometimes people just have to learn from trial and error.

Good for her. I honestly don’t see why anyone would get butt enhancements to such caricature-like magnitudes in the first place but hey it’s their bodies…

While she’s at it she should consider taking some of that money and investing in some basic English classes and a therapist.

Is it too much to ask of our prominent people they learn to articulate both coherently and intelligently? This is perhaps the third interview I have read that has managed to hurt my brain. Listening to them speak isnt any better. If you want to be taken seriously, present yourself as something worthy of such. If you’re trying to make or sell a statement, it doesn’t help your cause that I’m too busy cringing to consider anything you say.

Not all prominent people are educated. She probably did not receive the education you have, so why do you expect her to sound anything different than her reality? I’m sure there are plenty of prominent people out there with articulation skills best tailored to your tastes. No need barking up a wrong tree sis.

I don’t think a person necessarily needs to be educated in order to be articulate. It’s possible that the higher the education the wider the vocabulary and intelligence, but not always. I don’t believe that it should take a scholar to realize that he/she is not communicating in the same manner as those with whom they wish to rub elbows. Tutoring might help. End of day, if she truly wants something, she may need to learn how to fake it until she makes it.

Girl, it’s not just your butt that’s keeping you out of major films.

She got butt implants for her music career now she is taking them out for a non-existent career in acting. She didn’t love herself then and she doesn’t now or she would not have gotten implants put into her already humongous behind along with hip implants. She needs a reality check, its her attitude and professionalism that needs to be fixed.

Ouch. I have never even heard of this woman and that comment hurt.

Maybe a lot of people don’t particularly care for K. Michelle, but let’s not dog her. Some encouragement in a positive fashion might have a better effect. We’re all continuously growing and learning, that is something we do until death. So if she’s finally realized that her big butt is now who she is, good for her. Let’s start embracing each other in a more positive manner. Being negative and nasty come easy, but you show your intellect by taking the high road and saying something positive.

What will happen to all the excess skin? She will have to be very selective with the surgeon who removes the fat. She’ll need resculpting and a butt tuck of sorts as there is a lot to remove.

Agreed, it’s not the same has having a tattoo removed. However, I believe that she took all necessary precautions to have the enhancements done initially and have no doubt that she would follow the same procedure to have them [the enhancements] removed.

Getting butt implants was a dumba** move in the first place.

Who thinks that ever was a good look, anyway?

I personally think that she was brave to admit this to the public.. I’m so over this big fake booty crazes that everyone thinks is sexy… Now, maybe other celebrities might come forward and do the same , and put an end to this cartoon clone madness… Go K. Michelle, dare to be different!!!#

Western,women, for the most part, are vain, insecure, an guilable. If some man said that horse dung masks removed wrinkles, thousands of women would line up for the treatment. This is where we are, folks. Men don’t do this to their bodies to please us, so why do so many of us do it for them?

Hallelujah! This is the first salvo fired for a return to normal proportions for black women. I wondered when the whole huge butt obession would end. We black women already tend to be naturally well endowed in the derrière and our butts were just fine as they were. Then, we allowed the media and societal pressure from brainwashed, porn addicted men to make us feel less than unless we had a ridiculous, out of proportion, HUMONGOUS badonk. Of course, white women then jumped on the bandwagon. Body shape preferences tend to change every decade or so. Men will be bored… Read more »

Sara Bartman, enough said. We are not for show and tell, we are humans…women!!

It’s all about natural beauty now! Things are changing big time. Remember light skinned guys were in… now it’s all about dark skinned brothers especially with straight white teeth and you can get the body you want it just takes a little hard work with exercise and backing off of those bad eating habits.