We Went to Amber Rose’s SlutWalk and it Was Awesome 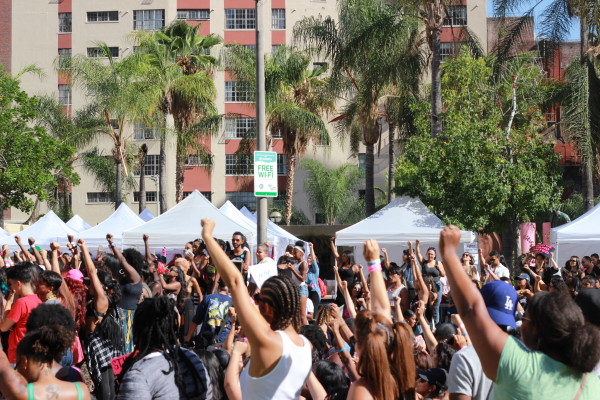 Amber Rose’s long-awaited SlutWalk happened in Los Angeles yesterday and it delivered on its promise of making a strong statement against woman shaming. The event is particularly poignant given that Rose has been consistently skewered in the press and on social media for her blatant and unapologetic sex appeal, especially following her divorce filing from rapper Wiz Khalifa and birth of son, Sebastian. Women came out in droves to march against gender inequality, sexual violence and the stigmatization of women’s sexuality. Although SlutWalks have been primarily organized and attended by white women, this event drew large numbers of black women.

A Few Facts on the Movement

The SlutWalk movement was birthed in Toronto in 2011 to protest the excuse of rape due to a woman’s appearance. The protests began shortly after a Toronto police officer insisted women should stop dressing like sluts to avoid getting raped. Women often march in lingerie to further drive home the point that responsibility for sexual violence lies with those who perpetrate it, not in what a woman chooses to wear

But why the name?

The term “Slut” admittedly has strong negative connotations associated with it. The objective of using this phrase is to spark the same level of outrage towards issues of sexual violence, gender inequality, derogatory labeling and victim blaming.

The walk started around 11 am in the heart of downtown Los Angeles and ended with a festival in the Pershing Square Park which included a fashion show and performances from Marsha Ambrosius. Folks of all backgrounds came together to share their truths and discuss female empowerment. Rose herself lead the day alongside her mother who proved to be her daughter’s biggest fan. 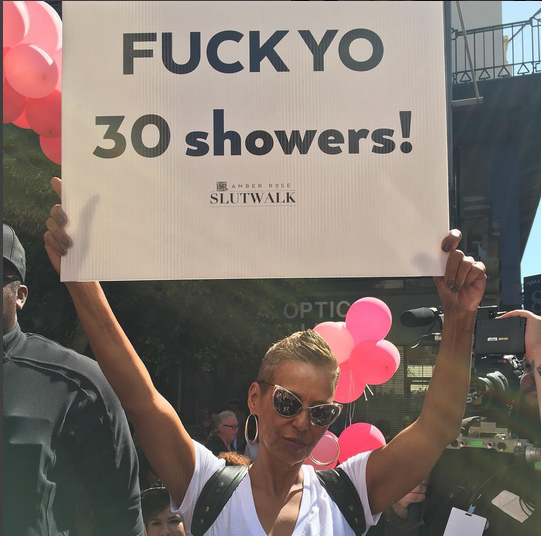 Rose’s mom’s sign is in reference to a disgusting statement former boyfriend Kanye West made about Rose in a February Breakfast Club interview;

In a moment that brought her, and many in the audience, to tears Rose took the stage to share her story and express forgiveness towards both West and her estranged husband (After her divorce filing Wiz took shots at Amber in his song ‘For Everybody’: “Man, I fell in love with a stripper, funny thing is I fell back out of love quicker.… Bottles be turning these girls into thots, Instagram turning these wives into ho’s.”)

She encouraged the audience to forgive male ignorance and move towards supporting other women who are struggling.

“Let’s all come together and be positive role models for each other and let that negative sh*t go.”

There was a “Wall of No Shame” where participants could share their stories and words of encouragement. 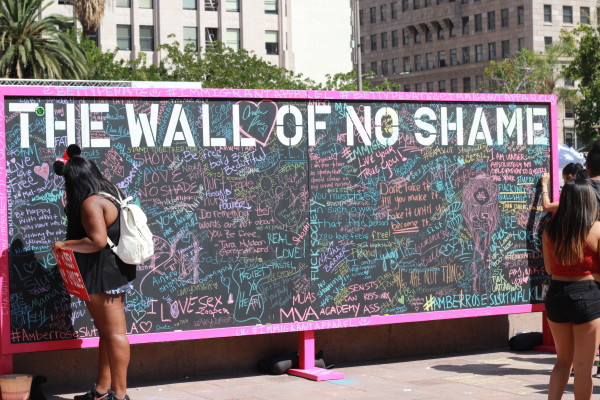 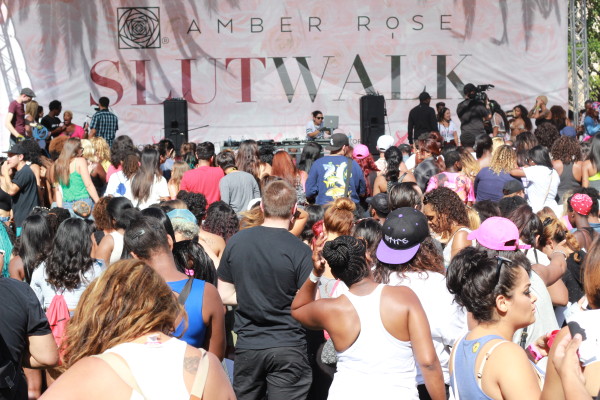 Take a peek at the photos below of the stunning women who showed out in support of the empowering day. 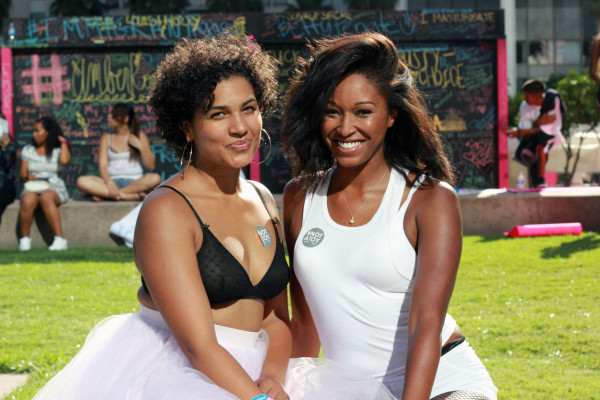 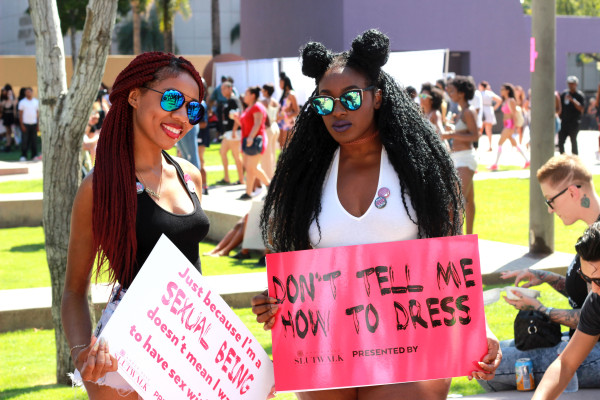 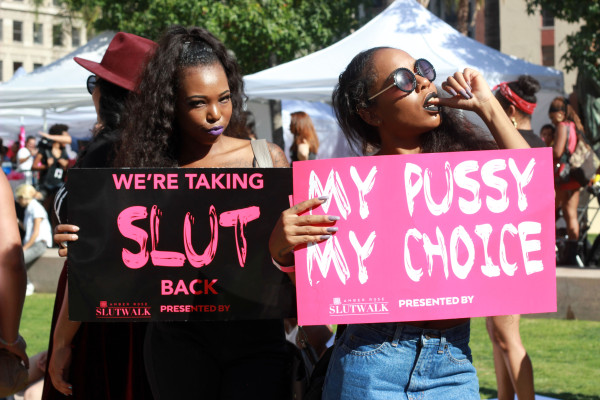 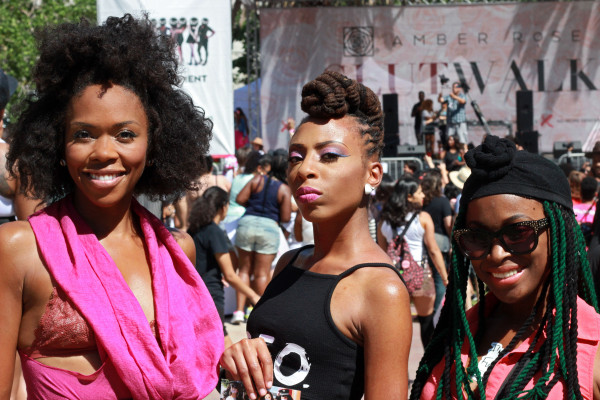 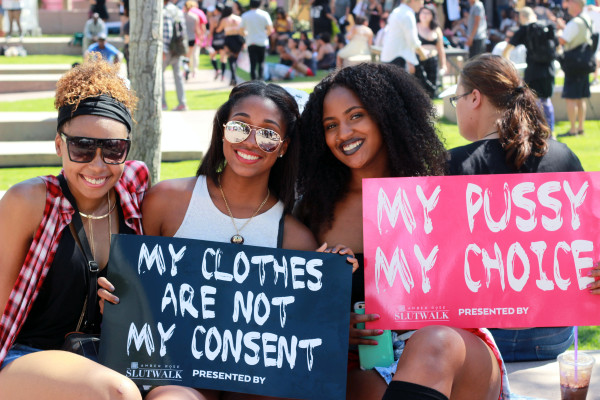 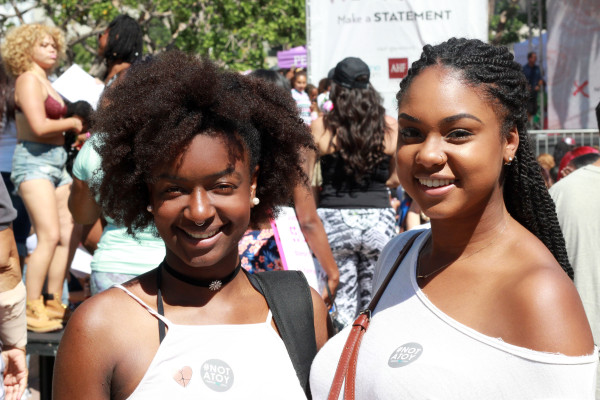 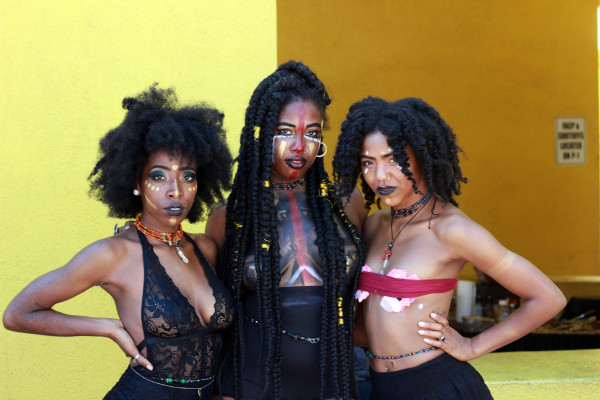 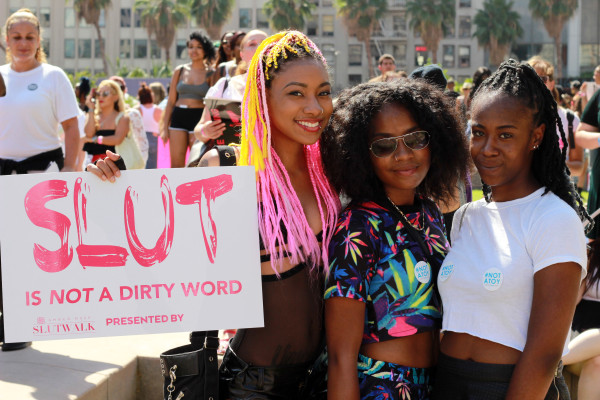 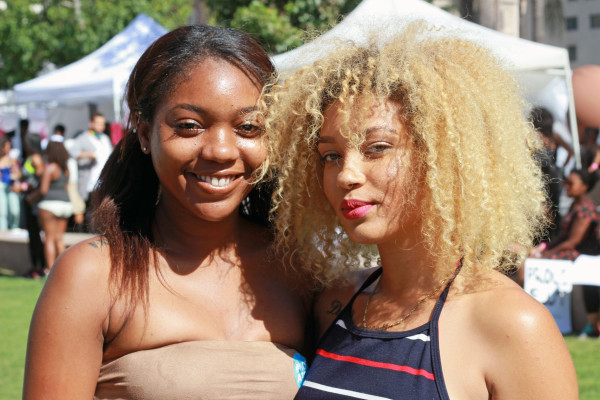 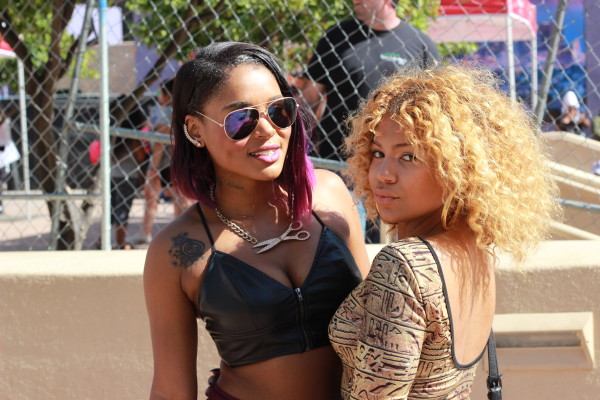 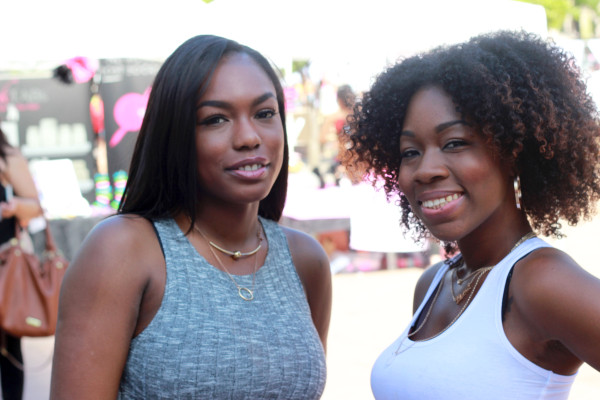 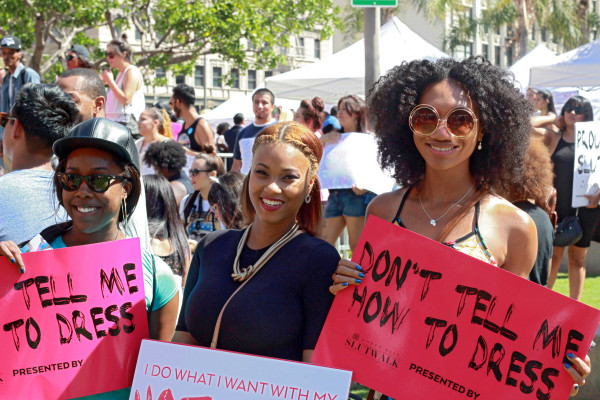 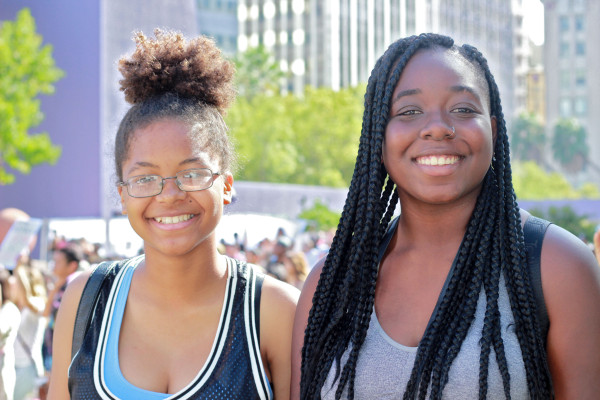 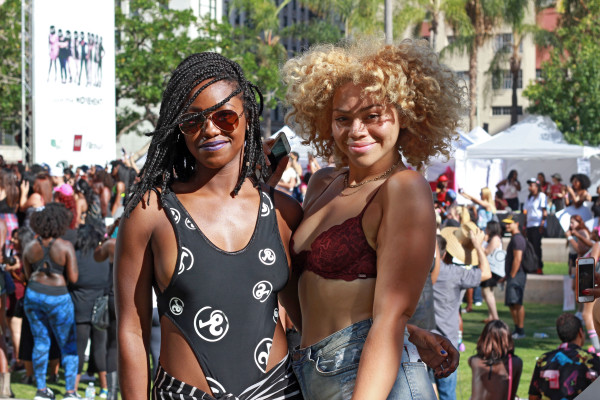 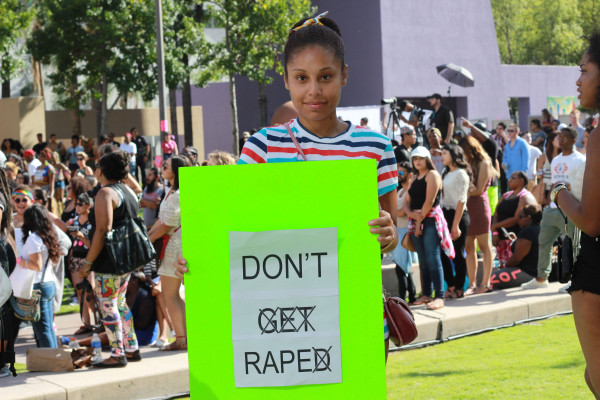 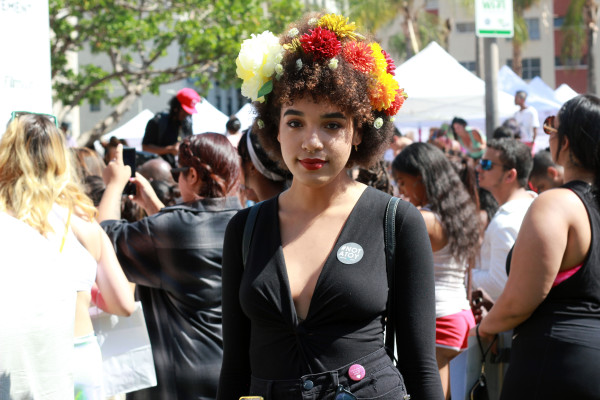 Have any of you attended a SlutWalk or similar event? Share your experience below!

I supprt them, was called the ho slut etc and still dressed how I wanted. Still do dress wild and always will because it is the rapist who has the problem not the victim.

More power to Amber and all those who attended. Kudos!

The Darling Kinkshamer
Reply to  Felicia

Wait…you complimented a woman and some one thought that you were gay?! –lesbian here(If only that would happen to me!) 🙂

Some men are like that. They will call you names if you are not interested in them. They think the only reason a woman would not want to get with all their good luvin’ is she must be gay.

“well, i didnt like you anyway”
then nigga, why you bother then ???

it kills me, some of these simps cry because of rejection, which I’m entitled to do.

Love this… Some of these black men done lost their minds. I’m sure Kanye was well aware of Amber’s reputation before he got with her. But the minute he decided to creep with Kim, now Kim is the angel and Amber isn’t? Please! Kim got gizzed on in some wack‑a$$ sex tape. Nothing to brag about. But because her fakeness has gone mainstream, and Kanye is the egotistical fool that he is, he chooses to ride with Kim (for the time being) so he can walk in Jay Z and Bee’s footsteps. Kanye and his fake empire are going to… Read more »

Kanye is a misogynist to the core. Stop supporting men like him that mistreat black women. Misogynoir=Kanye West

I don’t jump on board with everything that white feminists do. None of these photos of these stunning black women made it into the mainstream media. Most of the photos were of white women leading me to believe that mainly white attendees. No black faces in that commercial she made promoting it either, although she has gotten most of her notoriety from the black community. I won’t stand shoulder to shoulder with women who are still able to stand on their privilege above me. If Amber was a black woman (before you go trying to include her, SHE stated that… Read more »

Black women matter, we really do.

Not really.…In India and other much more conservative countries sometimes a girl is branded as a slut if she even kisses a boy. This makes her unchaste and unmarriable. If a girl is raped, all the blame is put on her. She could be forced to march nude through the entire village while everyone publicly shames her. Sometimes a raped woman is stoned to death for the shame she cast on her family. This is far from a first world problem, get a clue.

Why was I such a loser and didn’t say hi to you lol.

Amber’s message is very jumbled, I see this entire thing as shameless self promotion and little else. It’s a shame people will drown in a puddle of “Political correctness” before they stand on independent thought.
The original slut walk is a great concept though.

I definitely see what you’re saying. “jumbled” is a great way to describe what’s happening here…

Sorry Anon your logic is flawed. The only person not taking 2 minutes to think is yourself.…It’s called a False Dichotomy (you know like Republican Democrat/Progressive Liberal), binary just means any two things.. And while you are correct in that False dichotomies are used to divide and conquer, the only “divide and conquer” I can see here was perpetrated by the Slutwalk Organizers, who named it Slutwalk instead of Rapewalk or Womenswalk…Those would include all women, but your movement, (i’m sure of which you had no part of creating, only jumping on the bandwagon) decided to take a small minority… Read more »

All these lovely black naturals. My goodness

I think this was a great idea and I’m happy it went so well. I think it’s time to stop trying to blame rape victims for everything and hold men accountable.

Now that I’ve seen it…I’m in full support of it. You go girl

Every time someone uses the argument that a woman got raped based on how she was dressed, I’m reminded of what my Mum still says to such idiots ‘Explain paedophilia, what kind of diaper must the baby have on to not get sickos like that all hot and bothered’ and then the idiots are shamed into silence for a good while before they start grumbling that it’s not the same thing … really???

No.I am absolutely against this. This is not ok. Amber Rose needs to sit down. Her message is backwards. I can never take her seriously because she’s claiming she isn’t smutty…yet she has a video of her and Black Chyna twerking to trap music in the back seat of a car.…She isn’t classy. A classy woman understands that her goodies stay in the jar, and are not on display for every man to see. You can absolutely be sexy, and be at peace with your sexuality without displaying everything. That’s where this slut concept comes from. ..Prostitutes are the ones… Read more »

Liss Watkins
Reply to  Me

Women of all dress types get raped..This should be about rape awareness!!!! but since Slutwalk (not rapewalk) was probably funded by George Soros (Rockefeller or whatever NGO the NWO chooses), I’m sure the true objective of the movement is not what is being shown (btw Blacklives matter is fully funded by George Soros, and this type of stuff is why he got the boot from the Ruskies). This is like a crip saying, “I should be able to wear blue in the Bloods hood and not get shot at!! I should be able to wear whatever I want, and not have to pay… Read more »