Faubourg Tremé was the oldest black neighborhood in America.  Situated north of the French Quarter in New Orleans, it was home to the first civil rights movement, the first black daily newspaper, black businesses, and more.  The neighborhood is often left out of history books in spite of its very rich and important history. 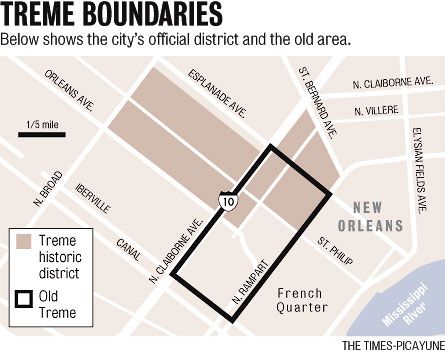 “The history books that we’ve come to understand American history through, have pretty much codified what the black experience is or was. Black people were slaves. Period. Then came the Freedom. Period. Then came the Civil Rights Movement. Period. When in fact it was a much more dynamic process than that. And really the rebellions go back to the 17-teens and 20s, that is, to the earliest black presence here [in Tremé]” – Brenda Marie Osbey, Poet

During the 1700s, slavery in New Orleans was distinctly different from other places in the United States because of French and Spanish influence. African slaves here had the legal right to earn money and buy their freedom if they so desired. As a result, New Orleans quickly became home to the largest free black community in the Deep South.

“Africans were walking loose in the streets [and] New Orleans was a picture of slavery gone wrong [in the eyes of proponents of slavery].” – Osbey

“The very existence of a free black population was a threat to the institution of slavery.” – John Hope Franklin, historian

In 1775, Julie Moreau, a manumitted slave, came into possession of a plantation sold to the Moreau family.  After she married Frenchman Claude Tremé, the two decided to carve the swampy land into suburban plots for profit in the 1790s. The area would be called Faubourg (meaning “suburb” in French) Tremé and become a racially mixed community. Many of the neighborhood’s first homeowners were black, including Haitian immigrants who fled the Haitian Revolution (1791-1804). By November 14, 1841, blacks owned 80% of the land in Tremé and the oldest black neighborhood in the United States was born.

A place of social equality for blacks

“What you had here [in Faubourg Tremé] was constant contact between free and slaved people … Revolution and rebellion and agitation against slavery that was as strong, if not stronger, in the free black community as it was in the enslaved black community.” – Osbey

In 1862, Faubourg Tremé became home of the first black daily newspaper in the United States. Started by Paul Trévigne, the paper was initially called L’Union and written in French. Later, he made bilingual versions of the newspaper and renamed it the Tribune. The staff was racially mixed and not at all quiet about its revolutionary stance on race. Trévigne and his staff used the paper to voice their fight to abolish slavery, demand land and education for the newly free, and insist on full citizenship and equality for all Americans regardless of race.  You see, though free blacks owned homes and businesses and were doctors and writers in Tremé, they were not equals to their white counterparts.

“One must remember that even the anti-slavery element in the North was not persuaded that there should be anything resembling social equality or enfranchisement.” – Franklin

After the Civil War ended (1865), the men at the Tribune pushed to create a race-blind democracy for the first time in American history.   It started with the fight to desegregate New Orleans streetcars, in which blacks were urged to enter the car, sit, and demand to be transported. These demonstrations were essentially sit-ins (like those that would occur later in the 1960s) and led to the integration of public transportation in the city.  The Tribune also urged blacks to cast their first votes, which resulted in a legislative body that was more than half black and that wrote the most progressive constitution the nation had seen.  New Orleans, consequently, came to have the first school in the South to be integrated through the early 1870s.  (According to the Cowen Institute at Tulane University, there were nineteen mixed schools by early 1874.)

This all occurred during the Reconstruction Period (1867-1877), and just like in the civil rights movement of a century later, federal troops were sent south to keep the peace.  (During Reconstruction, blacks across the country were given new constitutional protections via the 13th (1865), 14th (1868), and 15th (1870) amendments. Many whites were not happy about this.)

“We have never achieved as much as we achieved during Reconstruction. We had more political representation. We had more businesses. Now, we think it is an accomplishment to have a black mayor. We had a black governor back in those days in Louisiana.” – Kalamu ya Salaam, Writer/Educator

The end of a “golden age” in Tremé?

However, this “golden age” in Louisiana did not last.  With the ending of the Reconstruction in 1877, federal troops withdrew from the South. The White League (a white supremacist organization in Louisiana) swept through and re-segregated schools. Segregation returned to New Orleans after 10 years.  By the 1890s, blacks were being lynched in the South in record numbers.

“People were beginning to fear that rather than Reconstruction ushering in a golden age, it was actually going to be a golden coffin that was going to be an end of black rights in the Southern United States.” – Salaam

Trévigne and others struck back when Louisiana passed a law to re-segregate public transportation. Tremé activists orchestrated a plan to have Homer Plessy, who was “fair enough to pass as white but identified as black”, demonstrate the ridiculousness of the law.

The conductor asked, “Are you a colored man?”. He said, “Yes”. The rest is history. – Franklin

Thus came the landmark case of Plessy v. Ferguson, in which the US Supreme Court ruled in favor of segregation, or “legalized discrimination.”

Following this case, Louisiana purged 99% of black voters from its rolls and black schools closed down after the fifth grade. Congo Square, a place in Tremé where blacks once gathered regularly for commerce and culture, was renamed after a confederate general.  “Segregation came down hard,” but Tremé held its unique character for several years.

“In Tremé. White. Black. White. Black. Right next to each other. You didn’t go to the same school. You didn’t sit in the same place in church. But the kids all played in the street. And the people all sat on the steps talking. Black and white. So, it was weird. It’s hard to imagine if you didn’t live it.” – Irving Trévigne, carpenter, descendant (great-great nephew) of Paul Trévigne

Since then, Tremé has gone through urban renewal in the 1960s, which tore up the mixed neighborhood and built black projects and white projects in its place. Then there was the crack war of the 1980s and the devastation of Hurricane Katrina in 2005. Tremé is not the same neighborhood it once was, but its pivotal role in our American history should never be forgotten.

For interview quotes in this article and more on the Tremé, check out the documentary, “Faubourg Tremé – The Untold Story of Black New Orleans.”

Have you heard of Faubourg Tremé?

I absolutely love looking at these photos from yesterday’s time. I have no early photos of my family beyond my grandparents – not everyone had a camera or could save their belongings. This is a great piece!

Wow..thank you for sharing. This piece is both enlightening and inspiring.

That’s wonderful. This is beautiful history along with the rest of our ancient history.

Nice to learn something new about African American history.

Great article. It’s really hard to not feel heavy after reading these stories.

My papa’s from New Orleans, 4 generations creole family.. I had no idea , wow

Thanks so much for sharing! My creole great grandmother purchaes land in Lafayette Louisiana. Her husband was tricked by white men during a game of gambling and signed the land away (he couldn’t read). Our family still collect the mineral rights to the land. I wouldn’t be surprised if other similar stories happend to other black ancestors.

Congo Square spirit lives on. WhenI go to Jazz Fest my favorite area is Congo Square where it is all about celebrating African heritage through music, art, clothing, etc. And they usually have an exhibit about a country of African or mostly African decent being showcased.

On another note BGLH I have not seen anything on here about this textbook that calls African slaves “workers” and “immigrants”. Total Bulls$%& like we came over voluntarily on visas or some crap.

Lots of errors about the Tribune (which was founded by the Roudanez brothers) with Paul Trevigne as editor. Trevigne is my relative, but a good article.

The photograph labeled as Homer Plessy is actually P.B.S. Pinchback, the once Governor of Louisiana and former Captain of the Louisiana Native Guard Infantry