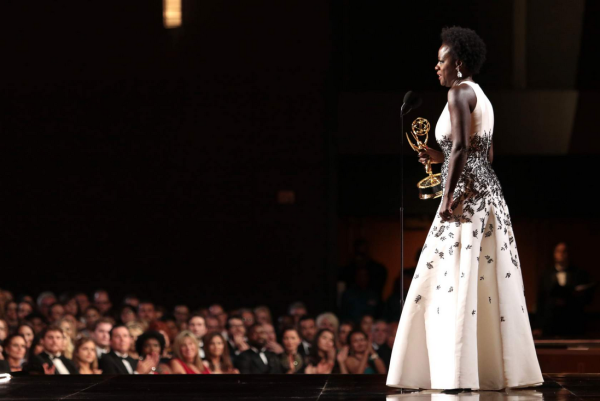 Last night Viola Davis made history as the first black woman in the Emmy’s 67-year history to win Outstanding Actress in a Drama for her role as Annalise Keating in How to Get Away With Murder. The Juilliard-trained actress used her moment to honor black women who came before her, quoting Harriet Tubman and shouting out industry veterans including Taraji P. Henson (who was also up for the Drama Emmy) and Kerry Washington.

“In my mind, I see a line. And over that line, I see green fields and lovely flowers and beautiful white women with their arms stretched out to me over that line. But I can’t seem to get there no how. I can’t seem to get over that line.” That was Harriet Tubman in the 1800s. And let me tell you something: The only thing that separates women of color from anyone else is opportunity. You cannot win an Emmy for roles that are simply not there. So, here’s to all the writers, the awesome people that are Ben Sherwood, Paul Lee, Peter Nowalk, Shonda Rhimes. People who have redefined what it means to be beautiful, to be sexy, to be a leading woman, to be black. And to the Taraji P. Hensons and Kerry Washingtons, the Halle Berrys, the Nicole Beharies, the Meagan Goodes, to Gabrielle Union. Thank you for taking us over that line. Thank you for the Television Academy. Thank you.

The brief, beautiful speech set the internet on fire as black celebrities expressed pride in Davis’ accomplishment. Check out a video of the speech and Taraji P Henson’s incredible reaction below.

OMG!!! I’m floored… and proud and crying… VIOLA VIOLA VIOLA!!! Thank you for letting us share your shine!!! Man… tears

She didn’t have to include us in her history making moment. But #shedidit #ViolaDavis #sage

Thank you @violadavis for being all that you are…I appreciate you so much🙌 #makinghistory #WOC pic.twitter.com/RVygboYQh7

This moment really did bring tears to my eyes. It was so big and the fact that she shared it with all black women on prime time TV and that they all felt and returned the love was so powerful and touching! Such a special moment!!

I was in tears.Viola Davis was brave to do that on stage.It was a beautiful moment it needed to be said.To really make people think and look at the underline racism that is still there.That we need to face.I hope that one day my child will have as many opportunities as anyone else no matter what color or gender.

Now this is what you call a GENEROUS person. she isn’t afraid of sharing her shine.

Beautiful moment in history!!! ???
Side Bar: anyone else notice John Stamos’ shadey expression in the background on the clip of Taraji’s standing ovation l?! ??

Ugh! I love me some Viola Davis! I love that she’s so socially aware. The fact that she not only quoted Harriet Tubman but ALSO gave a shout out to all the OTHER Black actresses out there? Love it!