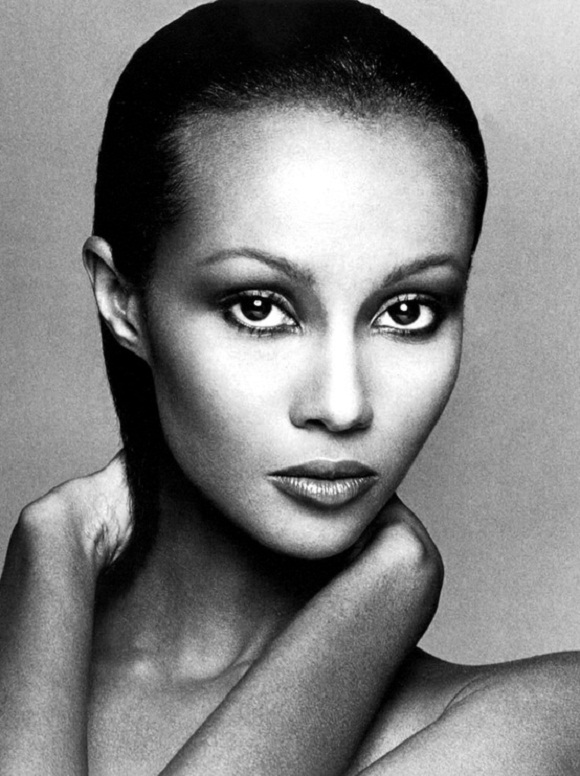 Blackness is physically diverse. But there is a temptation to declare what ‘true blackness’ or ‘true black beauty’ looks like. Supermodel Iman experienced this when a 1976 Essence Magazine article by editor-in-chief Marcia Gillespie referred to her as “a white woman dipped in chocolate”. Iman, who has been consistently vocal on racism in the modeling industry, recalled in a recent interview with Fashion Week creator Fern Mallis how offended she felt;

Iman revealed that she first learned about the quote when asked about it by a Time magazine writer. “I’m a very political person and I think things through clearly, even when I was 18 years old,” she said. “And I definitely did not want to talk to this white [Time] journalist about a war with me and a black magazine. I was going to bring the war to [Gillespie].”

Iman said she addressed Gillespie personally, telling her, “ ‘Probably, I’m more black than any black person in America.’ I mean I don’t have any white in me. I’m pure Somali,” Iman explained. “So to me, I took offense to that. I don’t look like a white woman. I look Somali.”…

While Iman was feeling the heat from African-American critics, she noted that “the white side was saying, ‘Oh, you’re different. You’re better than everybody else.” However, she could see right through those left-handed compliments. “If I didn’t know the nuances of the politics of beauty and how you can use it by separating people and humiliating people… that constant friction was not lost on me,” she said.

Iman told Mallis that she entered the industry as “a fully-formed black woman,” and that’s how she was able to navigate through negative stereotypes in fashion. But some 40 years later, not much progress has been made — young black models are still speaking out on racism in the industry.

Anything that is thought of as beautiful, people want to relate it to whiteness. This reminds me of the comments I see on Youtube featuring dark skin black women with beautiful hair who are constantly asked if they’re mixed. When they reply ‘no’ that’s when people want to start digging into their ancestry and bring up how African Americans have some white blood in them from generations ago and that could possibly be why their hair is so pretty. Razorempress said it best: “Stop trying to mix me.”

I would personally take offense to that too. And while it could’ve been worded differently, I completely understand what she means when she says she’s “More black than any black person in America.” She’s from Africa, so unlike us African-Americans, she knows who here forefathers and mothers were and what lands she came from and all the people from it. Which is the main point that has been brung up in the recent “Black-Americans appropriating African culture” debacle. People seem to think that the ethnicities in Africa that have thinner features or straight and less kinky hair are “mixed with… Read more »

“White people got their genes from us, not the other way around.”

This is one of the most important things people refuse to understand. It’s not ignorance it’s absolute refusal.

Africa is the 2nd largest continent on the planet with 54 countries.

Exactly. Iman more in tune with her history than I am!

If anything, as African Americans, WE should look like White ppl dipped in chocolate, lol, since we ARE mixed with White! Science definitely affirms the biblical narrative that the Garden of Eden was along the coast of East Africa (Cush/Ethiopia) in Genesis 1:13.

+1 million. I get tired of the black police . don’t care for Essence magazine much.

Iman is such an intelligent, elegant woman(and yes, very strong).

That’s the most ridiculous statement one could make! Iman is a true black woman. A Somali woman in her true form. How insulting! She set the record straight though.

Hollywood and the Fashion Industry are probably the most racist of any organization. So sad that there has been very little progress. However, what White woman ever resembled Iman?? Iman’s features are clearly African. What was Essence thinking back then?

Of course it was a Black magazine that did this smh. I’m guessing it’s because her and other Black Americans like to generalise. I have the same thing happen to me when I first came to the States. People had the nerve to call me a liar and that I didn’t “look West Indian”. What exactly is a West Indian supposed to look like because just like Africa, it’s made up of many diverse countries and we don’t all look the same.

Poor woman. The origins of many ethnicities have yet to be determined some people in Africa with features like Iman have been mixed with either Arabs or Berbers or both and others people just don’t know so unless you’re a scientist with a research paper full of genealogy evidence you can’t go around judging people based on their looks.

Another thing… Something I’ve seen a lot coming from the black community is people mostly men regarding women from Somalia and Ethiopia as the most beautiful black women because of the difference of features they have with a lot of west Africans (thinner nose, less kinky hair, and lighter skin) it’s really upsetting but I haven’t seen it being addressed as problematic. Like I don’t know what’s worst people putting these ethnicities down for not being black enough or being glorified for it. It’s all scary really.

Sadly, this is one of the side effects of living in the Western world and taught that everything that looks different than you is somehow more exotic and beautiful. Not all Black Americans think that way, and we see the beauty in all African people. It’s the differences (in this case European features) that make Somalis and Ethiopians stand out.

Not justifying this at all, but back then was a different time. The editor had probably never met a Black person with European looking features and being in awe of Iman’s beauty was the only compliment she could muster.. People of all races are usually fascinated by people who have features different from their own and African Americans are no different. I’m sure the woman didn’t mean any harm. Giver her a break America inflicts mental anguish on Blacks born in America on a daily basis..

That was supposed to be a compliment?

Fed Up
Reply to  alasia min

Wow, people are STILL trying to argue that east africans are mixed? They just can’t be black, can they? Smh. This is honestly yet another form of prejudice against black people. Beauty can’t come from black. Nope, beauty can only come from whiteness. If you are beautiful, but you are black, you must be mixed. Smh. Who said those features were exclusive to Caucasians? Who? Because guess what, they’re not. Stop trying to take the blackness label away from Somalis and from east africans in general, because they are as black as they come. They can have those features AND be black… Read more »

Actually Semitic people are black. If you study the bible, you’ll find that the descendantts of Shem are actually black people

As a scholar on exactly these issues, i.e. genetics, I can tell you you’re unequivocally wrong.

Somalis have no Semitic influence. Ethiopians do. Somalis and Ethiopians are not the same people.

Iman is definitely more African than all us Black Americans. Period. I don’t care how you try to twist it…Black Americans are mixed with European. What an insult to Iman! Most black people in America don’t even know our heritage, but the editor has the nerve to say Iman isn’t black. Please…If you want to be technical, most black people in America could be considered multiracial by DNA. We are the ones who don’t know our history and culture. All we do is appropriate African culture…and I’ve been guilty of it too!