We have no words for these images from Serena Williams’ recent NY Mag shoot. So let’s just present them… 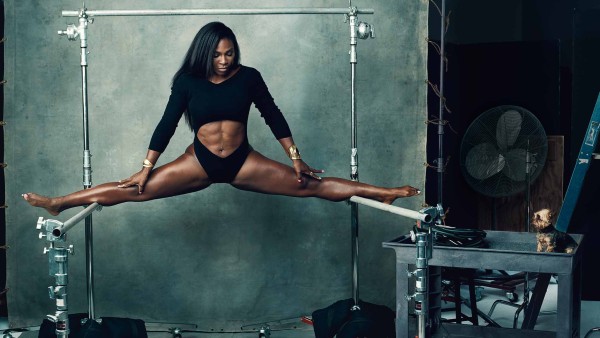 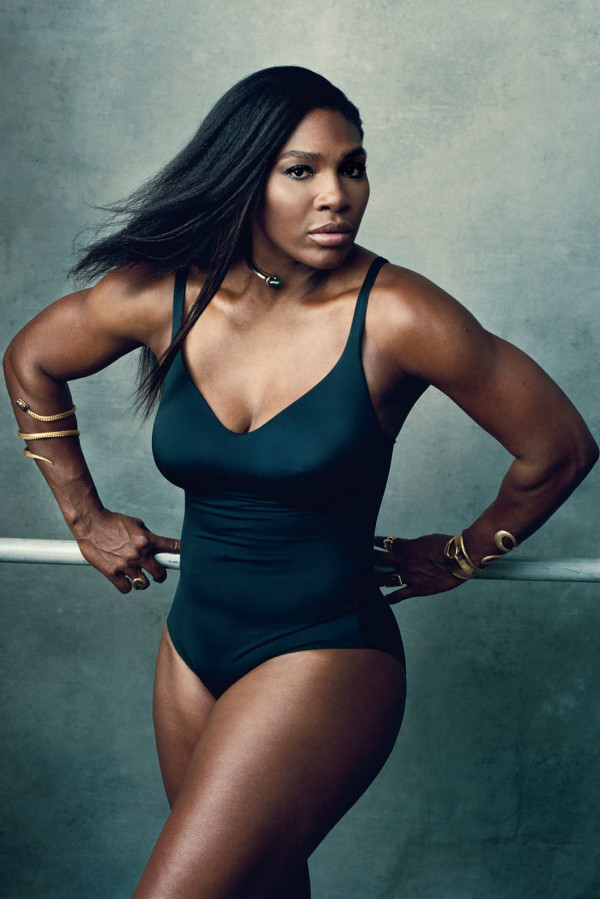 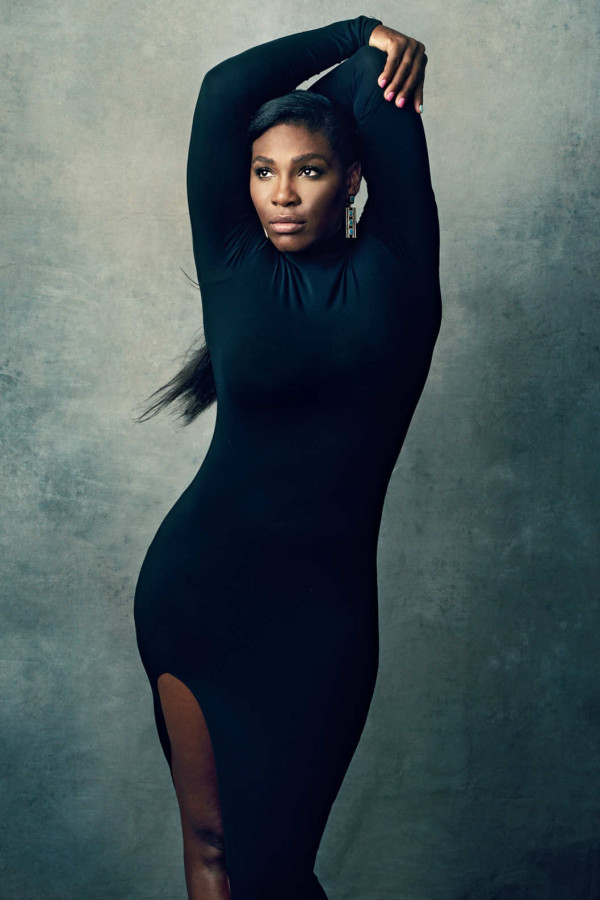 The woman that many now consider the greatest athlete of the modern era is a picture of beauty and strength. The accompanying article is disappointing in that it focuses on the issue that seems to surround Serena Williams wherever she goes — critiques of her body.

Inevitably, the sisters’ on-court style was described as “confrontational.” One sensed in early accounts of the Williams sisters’ dominance, and senses even now, a certain tightening of the available vocabulary in describing a muscular black woman on the court. Doubles-sideline-to-doubles-sideline-in-three-strides is an act of avian grace, and yet Serena is perpetually “crushing” and “slamming” and “rolling over,” as if the entire sports commentariat picked up English at a construction site. It’s instructive here to spend a few minutes googling “Roger Federer,” two words that inspire sportswriters to pseudo-spiritual cant: Federer crushes and slams but also “lifts” and “lobs” and “taps,” his stroke “liquid,” his forehand a humanity-saving treatise on the seraphic potential of the fallen human form, his feminine delicacy evidence that he exists on a higher spiritual plane…

Serena and Venus can never simply be Serena and Venus. They are inevitably spectacle, fodder for abstractions both crude and lyrical. They have inspired not just racist commentary but also celebrated works of poetry… These are works in which the sisters stand for the Sweep of History or the Black Body, and they do little to prepare one for meeting a five-nine, selfie-obsessed, hyperfeminine phenom under a blanket and a Yorkie.

I ask what it is like to bear the weight of representing people of color, women, 33-year-olds who want to believe in the imagined possibility of their athletic dominance.

“I don’t think about it,” she says. “I don’t dwell in the past. If I do, I’ll be swallowed up by negativity. As Mandela once said, ‘I will be in a mental prison.’?”

We love that #carefreeblackgirl way of thinking! The article suggests that it is Serena’s father and long-time coach who is responsible for her mental toughness.

But Richard was grooming his girls for a takeover, bestowing upon them a carapace strong enough to withstand the doubt, discomfort, and contempt of an entire culture. Winning depended on self-belief so impenetrable that a genteel lynch mob could not slice through.

Yaas! This video of Richard Williams interrupting a journalist who questioned sister Venus’ confidence during an interview early in her career confirms that he was training them to be strong of body and of mind.

You can check out the full NY Mag feature here.

She is just so damn beautiful! ?

Yes! I love her and what she represents. This woman is somebody black women should look up to alongside michelle Obama. I also love the father because the white guy kept asking her basically trying to make her doubt her answer and thus herself. Allow kids to dream big but just sure they know the steps they have to take to make them a reality.

Now that’s what a father is to do when people like the journalist try to plant the seed of low self esteem and doubt in his kid!

I almost got into it with someone on FB over this (and I NEVER “get into it” with folks on social media, lol). Of course all she saw was “scary black man”…I said, that’s called being a FATHER. No, Richard Williams wasn’t perfect, but no one can deny that he did a good job with his kids…hopefully all of them, not just Serena and Venus. Also, seeing these pics and the commentary with them, I found myself wondering not for the first time: Is it better to be feared or loved? They try so hard to destroy us because they’re so… Read more »

That says everything I could possibly articulate. The woman is working IT! #gititgirl

She is so stunning! She was on the cover of Vogue over a month ago, check it out when you can…

Wow that video clip! She was just destined for greatness. I love the confidence her father instilled in her even early on. A lot of kids need that, self confidence starts at home.

They can’t get over themselves, can they?…The sisters should stop doing these interviews, magazine spreads and just continue to win…let them talk, speculate, be mad…who cares..!.…and their father have no f to give.…never did.…He does not care what they think at all.…

This woman is a superhero!

Serena’s response to the question about how she felt bearing the weight of representing people of colour I found a bit odd. Why would she mention dwelling on the past when that had nothing to do with the question. Wasn’t the interviewer merely asking her how she felt representing those who could look up to her feeling they could now achieve what Serena has achieved in order to get ahead in their chosen field despite all the discrimination many of us face? I don’t know, I maybe wrong. Whether she likes it or not there are plenty of young black… Read more »

Richard Williams is a “Boss”, he should have a holiday. That’s a black father, he is the truth.

Her full figure is on point. She looks so healthy.

She should be cast for wonder woman, how tall is she? Or storm, storm was originally Black and from Africa.

The Williams Sisters are not only beautiful and immensely talented, but positively ADORN Tennis, and have for many years now, to the enormous benefit of International Tennis. Even 77 year old gentlemen like myself still admire them!

She ROCKS! They both do!

wow, you go girl now that’s a body for you rich, talent, and attractive.

Wow! She looks like a super hero goddess! Amazing photos.