From ‘Too Ugly to Adopt’ to a World Class Ballerina: Michaela DePrince’s Powerful Story

Privilege is everywhere these days.  Just turn to any reality TV show and no doubt you’ll be vicariously immersed in a world full of excess. A world where talent holds no value, and appearances are everything and more. 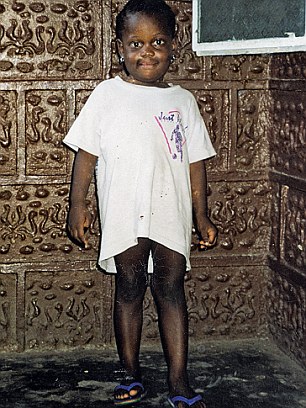 The answer, for ballerina Michaela DePrince, was simple: grab hold of a dream and work tirelessly to make it a reality.

In this month’s issue of Glamour magazine, Deprince candidly recounts how she has gone from being a nameless girl,Orphan 27, from a remote orphanage in Sierra Leone, to where she is today: a 20 year-old member of the Dutch National Ballet in Amsterdam. In the trailer for her memoir, Taking Flight, Michaela reveals that there were 27 orphans and that they were numbered in order of favor. She was number 27 due to her skin condition. “Who would want to adopt a girl who looks like you?” The orphanage staff would tell her. 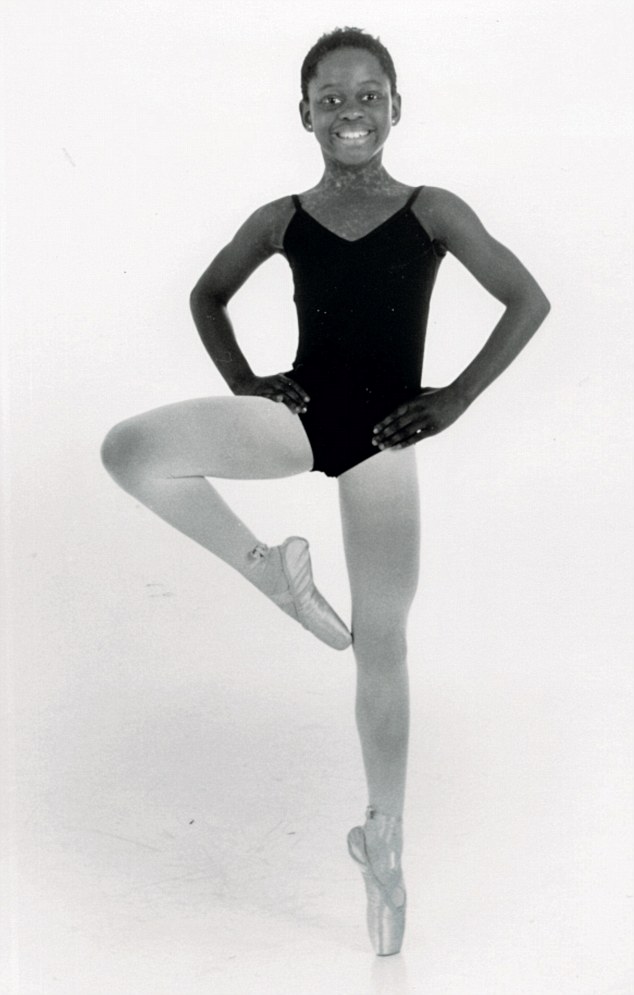 Deprince’s  decision to become a ballerina happened much by chance. While she was still at the orphanage, she happened upon a magazine image of a ballerina en pointe, and she was instantly mesmerized.  “The dancer looked beautiful and happy—that’s what caught my eye,” she recalled. “I wanted to be happy.”

When the adults at her orphanage would tell her she was too ugly to ever be chosen. Deprince recalls, “I guess I was a little sassy. Whenever people called me things, I would say, ‘I don’t care. I’m going to be someone.’” And she’s made good on that promise to herself. In truth, belief in herself was all she had when she met her adoptive mother.  She handed her the magazine picture of the ballerina, and when her parents took her back to Cherry Hill, New Jersey her trek to ballerina stardom would begin in earnest.

By the time she was 14 she had starred in her first documentary, and this year MGM just acquired the film rights to her memoir, Taking Flight. 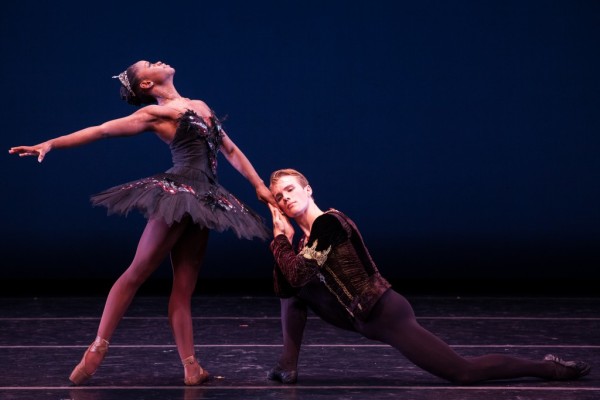 There is a reason stories like Michaela Deprince’s will never get old. Hers is more than a rags to riches story. Hers is a timeless story about the value in never giving up. Hers is a story about relying on talent and skill to triumph in a world where one’s value is often linked to Western standards of beauty. Deprince has never allowed the world’s view of her to shape her identity. Even at four years old, virtually alone in the world, she knew she was destined “to be someone,” and she never allowed that belief to waver. She is a testament to the power of perseverance, and we are honored to watch her star rise. 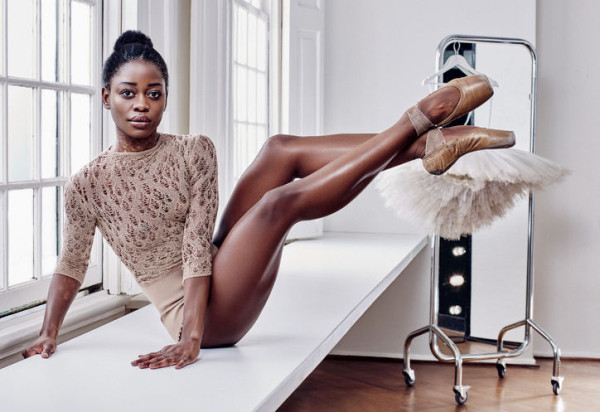 What do you all think of Michaela’s spread in this month’s Glamour Magazine?

Sorry! I’m fixing it now. We really really need a copy editor but currently don’t have the budget 🙁 That’s a 2016 goal.

“Too ugly to adopt.” Who the hell says that to a kid?

I’m happy for her success and her ability to believe in herself no matter WHAT those said to her. Yet, I really can’t hide my UTTER disgust at a bunch of toxic brainwashed adults deliberately trying to destroy a 4 year old baby’s self worth, self esteem, and basic human dignity before she ever had a chance to live her life! What, did they want her to kill herself or have some predatory adult sexually abuse her because she wasn’t she couldn’t find any kind of affection or positive attention anywhere else?Dafuq was wrong with those people?!? Oh right! White… Read more »

The aunties who ridiculed Michaela as a young child, were not white. They were poor, uneducated, superstitious African women from the village. Their lives were as abysmal as the orphans.

…Okay? How does this change the point of my comment about the underlying reasons causing them to behave the way they did.

What are you doing to make things better for women of colour? You could clearly learn a great deal by listening to what Elaine DePrince (I’m guessing Michaela’s mother) is trying to explain to you.

What kind of adult would take to a child in such a cruel manner they should have been fired for even uttering those words. She is a very beautiful woman

There was no firing. There were just a couple of African aunties earning pennies a day. The orphanage couldn’t be choosy, and the sensibilities of the children did not play a role in their concerns.

her cheek bones are lovely and she’s gorgeous. Her spirit is amazing. Imagine beign an orphaned child with no one to affirm her existence and at 4 years old, she’s affirming it herself.

Where are all the Black ballerinas?? | gray suede

[…] of the very beautiful and talented Ingrid Silva along with the images within this post. Michaela DePrince‘s story of overcoming the harsh circumstances of her childhood as an orphan was heartbreaking […]

Right, she was adopted by my husband and me. She is the second of our six African daughters. Though 12 other families rejected her because of her spots, we were not at all concerned about them. We joke about spending our retirement funds on pointe shoes for Michaela.

From ‘Too Ugly to Adopt’ to a World Class Ballerina: Michaela DePrince’s Powerful Story – Positively Biased

Great story. Seems like BOC (Ballerinas of color) go through some serious hardships and end up making the dance of life looking like the best thing you could watch.

I am so happy for her and proud of her, simultaneously. She has had such a rough life, but I am happy that she has persevered and seized upon the opportunities that were presented to her.

It is shameful that she wasn’t adopted because she has a skin condition. They missed out on meeting and getting to know a wonderful and talented person.

I think she did finally get adopted–“She handed her the magazine picture of the ballerina, and when her parents took her back to Cherry Hill, New Jersey her trek to ballerina stardom would begin in earnest.”

She’s so so beautiful and was such a cute little girl. I cannot, and refuse to try to, wrap my mind around why anyone would say otherwise. I’m so inspired by her success and so happy for her. We have to treat each other better.

This young woman’s story is so inspiring. She really is the embodiment of perseverance and determination. Hopefully she can inspire others to do the same.

It hurts my heart to know that the people that are supposed to protect and nurture children aren’t doing that. I think her skin is just fine. It makes her truly unique. It’s sad that people have to put down others simply because they look a little different or that they are different all together. Well the jokes on them cause Miss Lady right there is doing things for herself and she is making her own path and defining her own version of beauty. Let me just say that the pictures are amazing even the one where she is knee… Read more »

Singing drake ? how about now?
Look at this beautiful black swan. I love stories like these.

I caught her story a couple of years ago. So wonderful to see her blossom even more. She’s a beautiful dancer and a beautiful girl!

Okay, BGLH, y’all know I love you but…can you at least make sure Michaela’s name is spelled correctly CONSISTENTLY in the body of this article? She is very much an inspiration and she deserves to be recognized by a blog that pays attention to simple details like the spelling of her actual NAME. Thank you!

Wow! She’s beautiful. I can’t wait to read and learn more about her. Very inspirational.

This is such an inspiring story. I imagine so many little girls being inspired by her. Beautiful.

i like michaela but i wish more people would talk about precious adams.

Tears everywhere! This is a beautiful story. Sometimes you’re all you’ve got. So glad to see that Ms. DePrince has made it big in the ballet world despite her difficult past. May she continue to fly.

That white prince though #AWWM but in all seriousness, it’s commendable that she kept perusing her dreams

[…] themed Pinterest board. I love this tutu water fountain. Michaela DePrince, the girl who began life as an orphan with a heartbreaking story, has became a world class […]

I like Michaela’s dancing much more than Misty Copeland’s, but that’s one woman’s opinion. Michaela is more graceful, elegant. I think she’s been overlooked because of Misty.
I had no idea she had such a rough start to her life- an amazing woman, an amazing story.

I loved this she is beautiful and inspirational God bless you

Look forward to seeing her performance and life story. She certainly beat odds against a world that demeaned her because of color, hair and life journey. Too often we accept white society’s values. BTW your line Blackgirlwithlonghair also represents these views-it must be straight and long to be attractive.
Signed: Self Loving Black woman with shortnappybeautifulhair