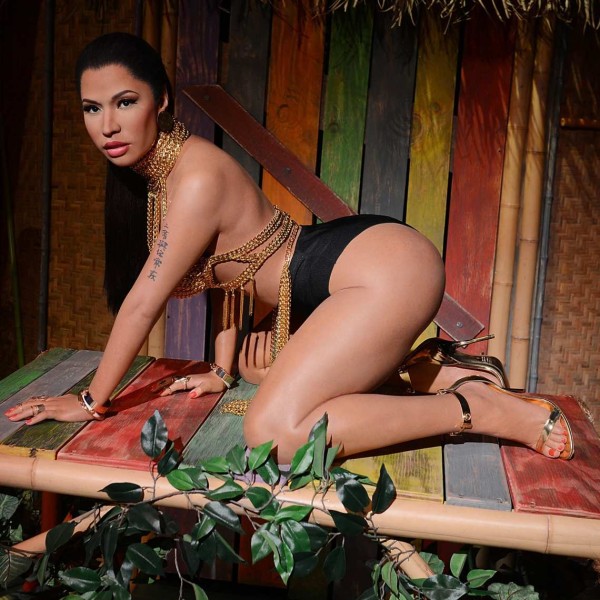 Las Vegas celebrity wax museum Madame Tussauds recently unveiled their latest celebrity statue — hip hop artist Nicki Minaj on all fours ala her record-breaking Anaconda video. While many, including Nicki herself, loved the statue, others felt the positioning was inappropriate.

After the statue’s debut, Madame Tussauds ran the #MTNickiSelfie campaign where museum visitors were encouraged to upload photos taken with Nicki’s statue. It wasn’t long that photos appeared of visitors lewdly posing with the statue.

In the midst of the controversy, Nicki has showered the museum with praise and love for the statue, calling it “iconic.” Perhaps this is part of the cultural recognition she was vocally seeking for her hit song. And, put on the defensive, the museum articulated Nicki’s role in the production of the wax figure;

“Nicki Minaj is an artist our visitors told us time and time again they wanted to see in the attraction, so we were thrilled to be able to add her figure to Madame Tussauds Las Vegas. We made the decision to celebrate Minaj’s unforgettable pose inspired by the “Anaconda” video because—thanks to her artistry and charisma—it resulted as one of the most iconic videos ever produced. The pose itself recreates an image Minaj published on her own social media channels as a teaser for the video. As with all people we immortalize in our attractions, her representatives were kept informed every step of the way during the figure-creation process and, once it was unveiled, Minaj herself repeatedly expressed her love of the figure on social media, calling the display “so iconic” and indicating her desire to come see it in person. Since unveiling Minaj’s figure and the “Anaconda”-inspired experience earlier this month, our visitors have responded with overwhelming positivity, and it has since become one of the most popular additions in the attraction.”

However, after two weeks, the museum temporarily closed the exhibit for redesign.

One can only hope that the next figure doesn’t invite creepy, objectifying photos from museum patrons.

It should also be noted this is not the first instance the museum has posed a female wax figure in this position. In 2009, pop star Kylie Minogue was put into wax on all fours in a short mini dress. Unlike Nicki, Minogue was decidedly upset with the museum’s interpretation.

What do you think of the museum’s statue positioning? Should they have anticipated what could happen with their selfie contest?

She approves of the statue, and even refers to it as iconic, yet she can’t see she’s been reduced to nothing more than a body part.

Niki knows exactly what she’ s doing. Let’s be honest Niki capitalized on her a***e before and that’s what she’ s doing now. If she wants to be taken seriously in the music industry, she needs to put her voice before her body.
On a completely different note, I am surprised that a family attraction such as Tussaud could even allow such poor representation of a woman.

The statue is an accurate representation of how Nikki Minaj presents herself to the public.
I can’t be mad at them. :/

I agree. I can’t believe anyone is surprised.

I used to work for MCA Chicago. When we had the Jeff Wall exhibition, there was one artwork that was not suitable for children, it was sexually graphic. So the museum cleverly put that artwork behind a piece of exhibition space that is blocked off. That way if someone who can handle that content can see it, they would consult with gallery security. In this case, this museum in Las Vegas aka ‘Sin City’ should have known better. A statue of Nikki Minja on all fours as art? No way! I agree with Azelia Banks on this they should have… Read more »

This is not news. This is an obviously lewd pose and not professional whatsoever, would you really expect people to admire, stand back and say “Wow how beautiful”?

Good thing they didn’t max the wax butt the actual size of Nicki’s own! What’s to be mad at?? This is the exact way that Nicki is portrayed in Anaconda, and Nicki approved it all, so that’s on her.

She conducts herself like a hoe and is proud to be one. This statue, therefore, does her justice.

Um the pose was lewd, what would you expect people to do? Bow before it? You don’t see anyone trying to hump statues of the virgin mary.