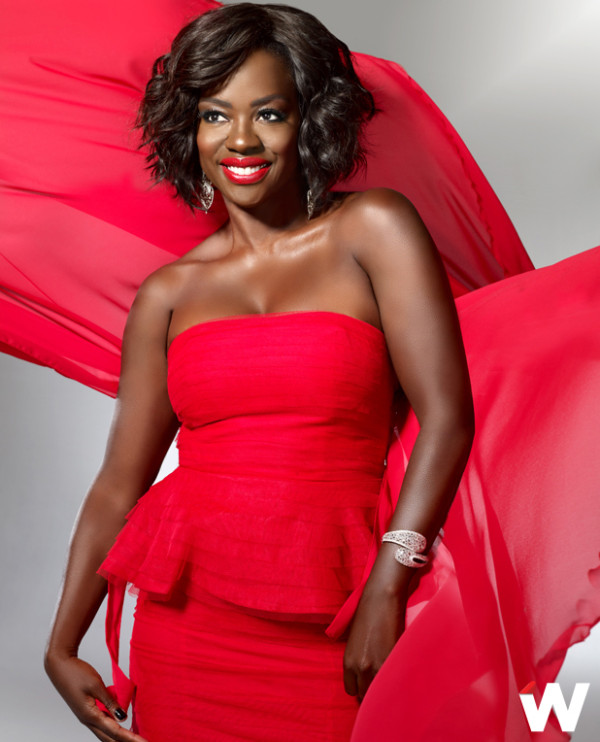 How to Get Away With Murder star, Viola Davis recently did an interview with The Wrap following her standout role on the Shonda Rhimes series. In the interview, Davis touched on many themes regarding beauty, standards of feminity and her experience as a black actress in Hollywood.

On the inspiration behind the infamous wig scene:

It’s not always about being pretty. But it is about uncovering and feeling comfortable with the way we are and the way we look when we’re in private. You know, as soon as you walk through the door, what do you do? You take off your bra, you let your titties sag, you let your hair come off–I mean my hair. I mean, I don’t have any eyebrows. I let my eyebrows be exactly what they are. And it’s me.

On what it means to be a dark skinned actress in Hollywood:

That being said, when you do see a woman of color onscreen, the paper-bag test is still very much alive and kicking. That’s the whole racial aspect of colorism: If you are darker than a paper bag, then you are not sexy, you are not a woman, you shouldn’t be in the realm of anything that men should desire.

On her groundbreaking role in How to Get Away with Murder:

And in the history of television and even in film, I’ve never seen a character like Annalise Keating played by someone who looks like me. My age, my hue, my sex. She is a woman who absolutely culminates the full spectrum of humanity our askew sexuality, our askew maternal instincts. She’s all of that, and she’s a dark-skin black woman. Some people who watch TV have acknowledged that and understand that. But I encourage you to search your memory and think of anyone who’s done this. It  just hasn’t happened. I hear these stories from friends of mine who are dark-skin actresses who are always being seen  as crack addicts and prostitutes.

Well, we salute you Viola for making major strides in Hollywood for women of color.

What do you think of Viola’s interview? Do you think the industry could benefit from more actresses of color speaking out about race and colorism?

That’s a shame. The first time I heard of this I was in New York with my Cousin and we were getting into a club. I passed (barely), but my Cousin didn’t. His skin color is like Viola’s which I think is gorgeous cause he has flawless skin, so you know he was looking fly. I was so shocked I left the entrance, but I stood there at the club for like 5 min. watching people get in and watching them dismiss others. I could not believe it. We’re always complaining about people not finding beauty in our skin, but… Read more »

You took the words right out of my mouth.

I agree. People of color should embrace light and dark. Just because TPTB in Hollywood discriminate this way doesn’t mean we should do it to each other. We are so easily led down the wrong path…

I love her! She’s doing so much for Black women in America and being VOCAL about it! <3

exactly, and I also think more of us behind the scenes will make it possible for us in front of the camera

I am so happy that she is REPRESENTING and speaking about colorism!

I LOOOVE HER!! She plays Annalise so well! Finally a multi-faceted, relatable, strong (yet vulnerable at the same time) BLACK character! And I love the fact that she has natural hair! I dont understand why she didnt play Nina Simone instead of “Miss I DONT DATE BLACK MEN” Zoe Saldana!
LOOL i like Zoe but i think she has some serious colour issues! why must she seek validation from white men? anyway.. Love you Viola! Keep repping!

Yes I agree with you. Trying to white wash black women’s beauty is getting old. We can’t really began to talk about a society that truly honors diversity when the biases are so blatant. And some of our own are just as guilty for collaborating with it. This is what it boils down to: 1) Hollywood understands the power of marketing. It is in their interest to keep the focus on women that fit their beauty ideals. Beauty=Caucasion; everything else does not. 2) They do it to keep insecure women who rely on these biases for their self-esteem happy. If you notice,… Read more »

Jeez, I am so sick of the idea that only white women are beautiful! (and I’m white). I see so many gorgeous dark skinned girls and women. All the time. I see women who have their own beauty, even though they look nothing like the “white ideal,” they are still their OWN IDEAL. REALLY! Hollywood has this technical issue with film and lighting, and THAT is one thing that should be a thing of the past. It is difficult, quite literally, to light white skin and black skin, in the same frame at the same time, but if we can do… Read more »

But then why was it not difficult to light white skin and black skin in the same frame previously? Black people have been starring in films with white people for decades now. And in fact, with the progression of technology it should be even easier now.

Also, there never seems to be a problem with lighting even very dark skinned MEN?

I do agree with you…showcasing our skills, strenghts and abilities is way more important than making so much efforts to change things that cannot be done so quickly. Mentalities are indeed very hard to move and require time and lobbying. However représentation is not a small issue. Let me break this down…the fact that dark skin women are under-represented in the medias 1‑imply than they are less attractive 2‑therefore people develop négative perception of her 3‑those women tend to have a négative perception of themselves. When you underestimate yourself for how you look, it also has conséquences on how you… Read more »

I really appreciate when Viola Davis speaks out like this because when an ordinary woman narrates her own expérience…they say “this is angry black woman who has issues with light skin women and she’s being a hater”.
I’d like this dark skin vs light skin come to an end at least inside our community but I may be naïve.

I love Viola Davis and she is really coming into her own and looking so stunning. She is right about the colorism in Hollywood. I find, sadly however, that this paper bag test mainly appeals to females. Dark skinned males are more readily accepted for the screen than a darker toned female. I wish that would change. Seeing these mixed girls playing full black roles all the time is getting annoying.

I totally agree!
Dark skinned males are more readily accepted even men with African names more easily accepted than women with the equivalent. Even among black people!!
Anyway, I love How To Get Away with Murder and Viola is doing a great job. Roles like that help to breakdown negative connotations about black people — period.

I’m so sick of these kind of issues. Really ladies. It’s like if we aren’t talking about how we aren’t accepted or aren’t measuring up just for being who we are, or how we perceive we’re being treated than we don’t have much to say. Look some things are never going to change and no amount of vocalizing, ranting, force feeding is going to do much. People like what they like and if you’re not appreciated for what you have, go in areas where you are. Focus more on areas requiring talent based skills versus looks. We would have a… Read more »

I stare at people that look like her because I think, male or female, they are so gorgeous. That red dress next to her rich skin, she is a stunner.