What do you get when you mash up Disney characters with black Greek culture? It might look something like this…

Watch the Yard is a website dedicated to documenting black Greek life and culture and recently posted a photo series of Disney princesses reimagined as members of black sororities. Each character has a back story. Check out some of our faves; 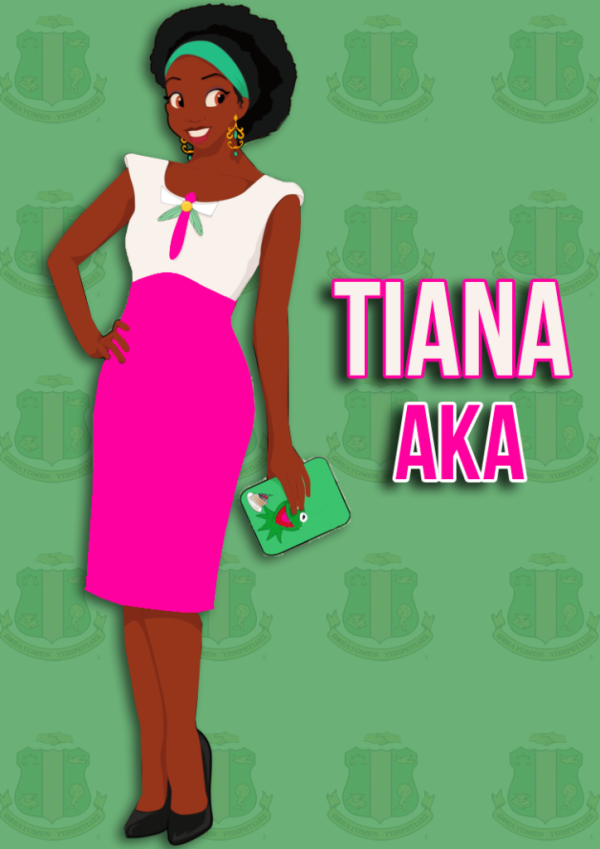 Bio: Let’t get things straight, Tiana did not come to college for no fun and games. She is a strong woman who doesn’t need anyone to do things for her…she does everything for herself. She has a double major in business and hospitality and spends her Summers interning at startups in Silicon Valley. With a strong sense of honor and integrity, Tiana firmly believes nothing deserves to be obtained in the world unless it’s done through hard work. In the epic words of her favorite stroll song, “She got her own house, got her own car, two jobs, work hard, she a bad FROG!” 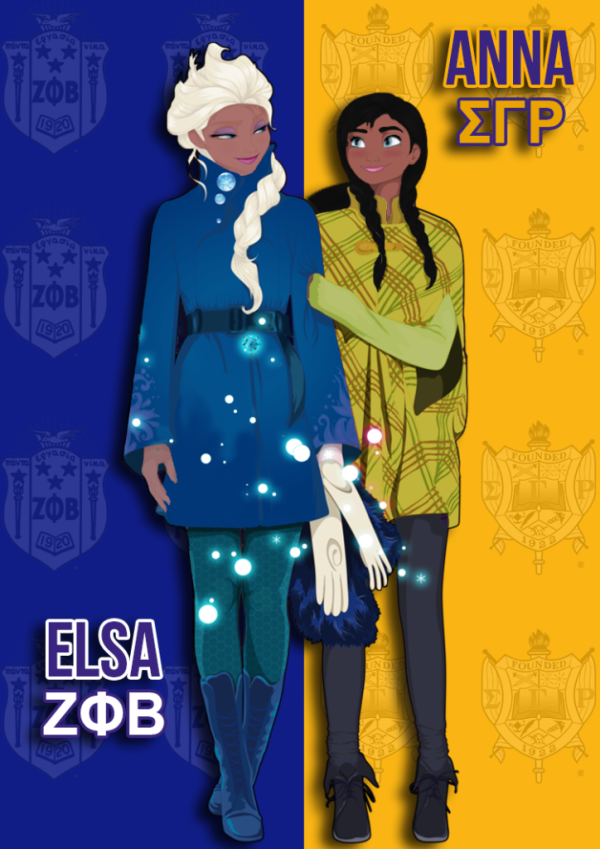 Bio: Elsa is confident, smart, and stylish, and as a result, people are often intimidated by her focused demeanor. She may seem pretty high strung and cold but deep down she is a great person and her sisters know it. Elsa doesn’t get involved in too much drama on campus, instead she focus her attention serving as the chapter president of her sorority as well as serving as the President the Student Government Association on her campus. Sometimes it pays to be the boss…but once you let it go… it’s worth it.

Bio: Anna is the most sisterly sister ever. Even when school is over, she checks up on each sister every week. She is a networker and goes to official SGRho events and knows everyone by name. Even though she has a sister, to her, “Everyone needs a sister and everyone needs love.” She currently is working with a non-profit and writing her senior thesis on advocacy for people with disabilities. 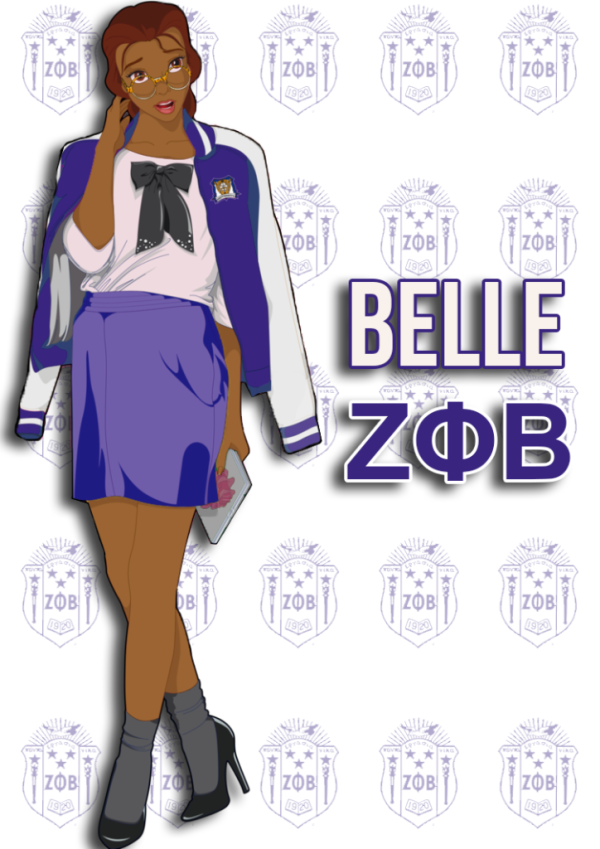 Bio: Bell is all about legacy and the liberal arts and thus she decided to go to Bellman Women’s College, the school that her mother went to before she died when Bell was young. There is a men’s college across the street and Bell is constantly being pursued by the school’s top athlete, a Que named Gaston. It is ok though because Bell pays him no mind, she is into her books and her sorority. After undergrad, her goal is to get her PHD and come back to her school as the youngest professor in its history. 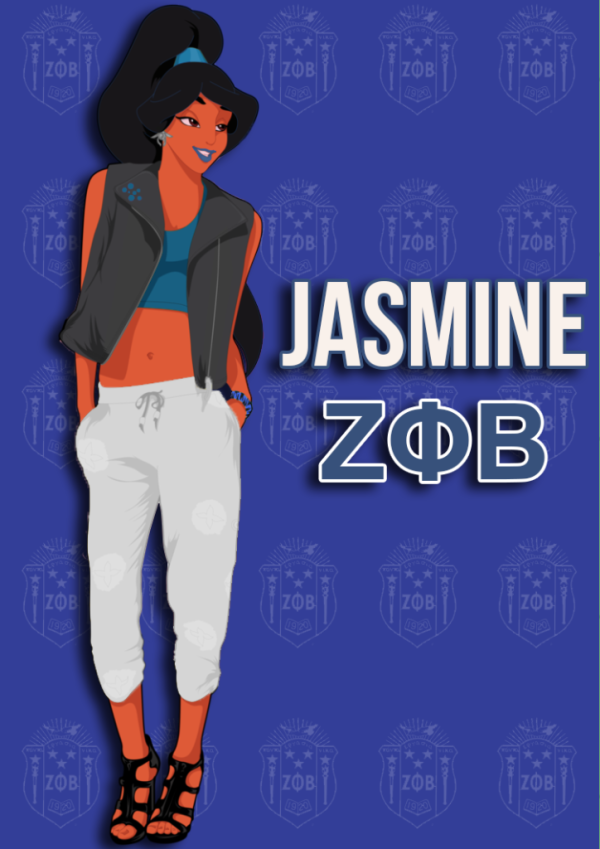 Bio: Jasmine comes from a family of wealth and prestige but she does not let that define her. She is down to earth and independent and is not afraid to speak her mind. She is known to take part in most of the political disputes and conversations in the classroom, and is all about the underdog. Currently she is writing her thesis on poverty and the prison industrial complex while interning for one of the nations leading social activism blogs. 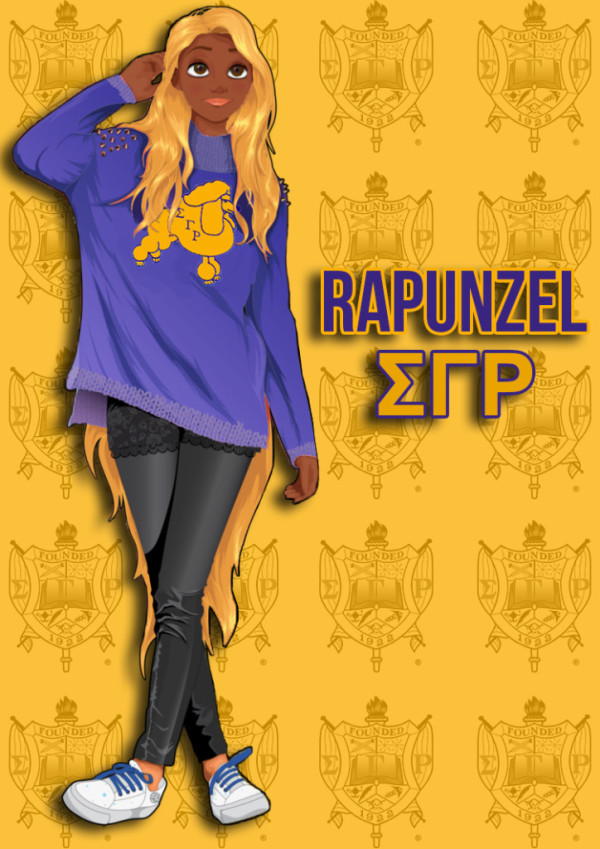 Bio: Rapunzel grew up sheltered and was not exactly ready for what her freshman year of college would throw at her. Once she got her bearings though she became one of the most active students on campus and accomplished people in her English department. She is a great sister and is the creative mind behind all of her chapters parties and events. Oh and her hair is LAID for the gods! 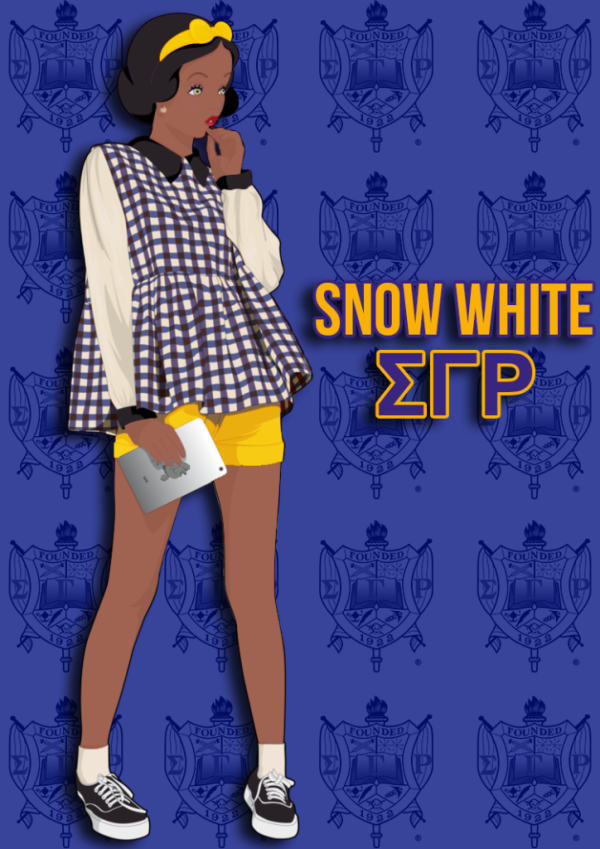 Bio: Despite coming from a broken home, Snow White realized the importance of love after being adopted into a big family. As a result, she learned that she was a natural nurturer and that she wanted to go into social work. During her freshman semester, White learned about why Sigma Gamma Rho was founded and the rest was history. She was given the line name “Poison” ironically because she is the total opposite of it. When it comes to a service project, she is always the first on the scene and the last one to leave.

These are just a few of the characters and you MUST go to Watch the Yard to see all of them! We are sooo loving this!

Are you in a black sorority? What do you think of this photo series?

Editors Note: It has been brought to our attention that the Disney characters were originally created by artist Ruben/DeviantArt user Hyung86. Although we love the greek life spin on these characters done by an unnamed artist, we wanted to make sure the original illustrator of these images was given proper credit.

I’m really hoping that you guys had actually looked into this article first because I found this comment on the original site that posted these altered pictures: “I really hope permission was recieved by Hyung86 on deviantart before this article was written. Because all of these pictures are edits from his ‘Disney University’ series. I saw no mention of him. If I’m wrong I apologize, but if I’m right this is blatant art stealing. Belle: http://hyung86.deviantart.com/art/Disney-University-Belle-357588228 Tiana: http://hyung86.deviantart.com/art/Disney-University-Tiana-378468087 Rapunzel: http://hyung86.deviantart.com/art/Disney-University-Rapunzel-414967817 ” The original unaltered pictures were done 1 year before this article was posted. The original artist’s signature/watermark has been erased from… Read more »

I really hope they gave the artist Hyung86 on deviantart, credit before editing his pictures. As an artist myself, I know it sucks for some one to steal and edit their art without permission.

I just went to check out his page and if they did this without his consent that is stealing. I’m an artist as well and there is nothing worst than your work being reused or taken without your knowledge.

I’m with you. Create our own. Enough of this reimagining of white characters as black. There are plenty of black/african orginal folklore and fairytale stories to draw from. Why we keep reimagining (regurgitating) the tired white ones is beyond me.

I’m glad someone spoke up because I couldn’t remember the original artist, but I recognised these pictures immediately as well.

I get the point but I’m sure if a black artist work was changed to a European, Asian etc character then a lot of people within the black community will be outraged. I wonder how the original artist feels about this? Was he given any credit? Why not create brand new characters? Create our own stories? Or whatever stories that already exist among the black community, bring it to light???

I really hope permission was recieved by Hyung86 on deviantart before this article was written. Because all of these pictures are edits from his ‘Disney University’ series. I saw no mention of him. If I’m wrong I apologize, but if I’m right this is blatant art stealing.

That is just awesome. Kudos to the artist for this. I’m going to pin this.

Mistress of the Mid-Afternoon