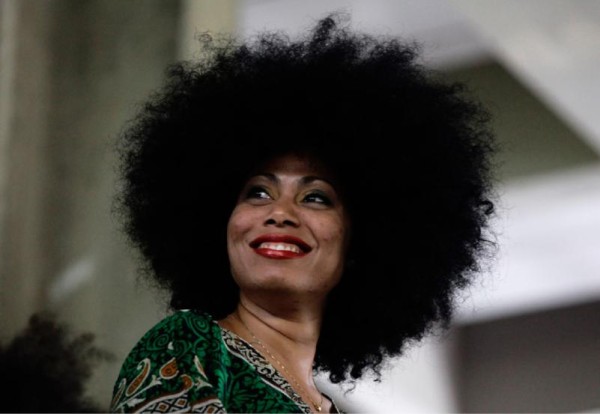 The two hour competition which had over 70 contestants was described as an effort to bolster pride within the Afro-Cuban community. Delahante states:

“I wanted to do something that legitimized my hair, this undervalued type of hair.”

According to the 2012 census, 64% of Cubans identified themselves as white, 23% as biracial and only 9.3% as black. Sociologists have stated the reason only a small amount of the Cuban population willingly identify as black is due to lingering prejudice. From the Wall Street Journal;

2009 estimates place the black or mixed population between 60% and 70% of Cuba’s citizens, but there are no officials of color in the upper echelons of Cuban leadership. The torture and humiliation Afro-Cuban dissidents face upon being arrested is often exacerbated by their skin color.

Take a look at some of the beautiful photos from the day. 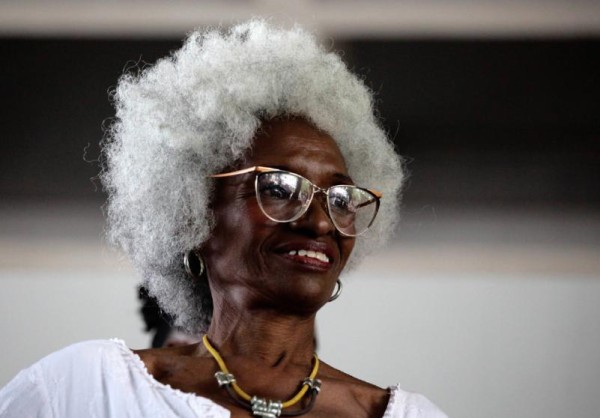 Felicia Solano, 72, was the overall winner of the Natural hair competition. 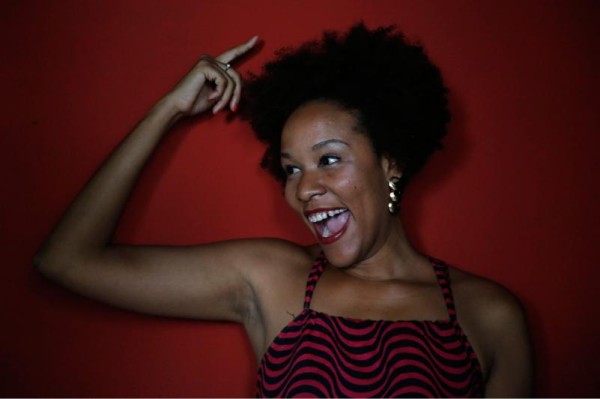 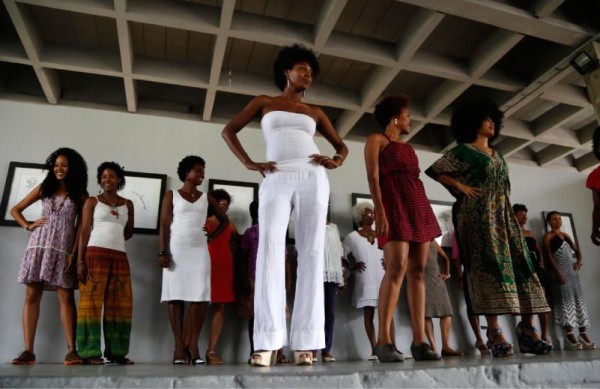 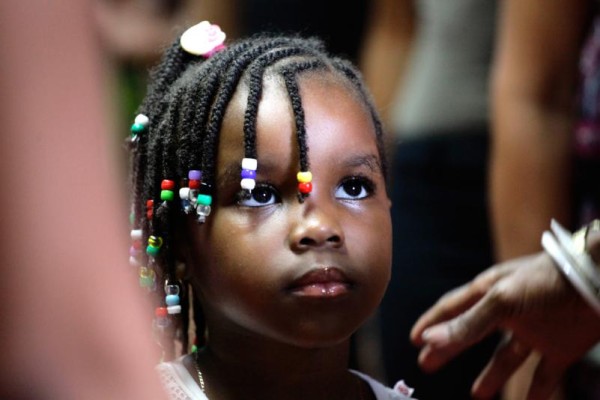 Four-year-old Dayanira was a runner-up in the hair competition. 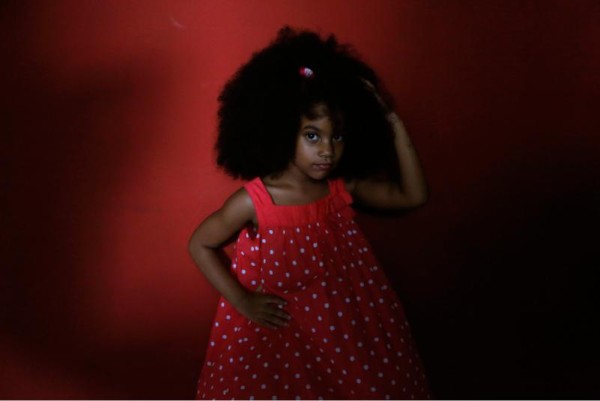 Five-year-old Paulina Champan was also a runner up in the hair competition. 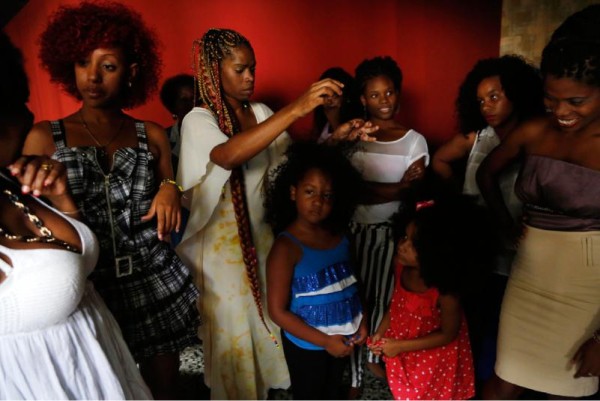 What do you think of the competition as a way to recognize black beauty in Cuba?

It’s a step in the right direction. It will take some time but it will certainly create the awareness as well as boost the confidence of blacks in Cuba.

Beautiful! Love seeing natural hair being celebrated across the globe.

Wow — very nice might do something similar in Jamaica!

Seems like black ppl are waking up around the globe and black women are at the center of it! I love how that elderly woman was the winner her frosty fro is gorgeous!

I think blacks in Cuba have been awake for a long time, Cuba is a white supremacist country They still practice their African religion whereas many blacks in the U.S. are now awakening to that.

Thank you for sharing this. One correction: Sociologists do not argue that the black percentage is so low because of prejudice. The government assigns people’s race on the census. Black Cubans are not afraid to say they are black. Sure there is racism, but that is not the reason for the census numbers.

I’m glad you said this because I found the article remarks on that puzzling. The black Cubans I met while working in Florida embraced their afro heritage fully…

there is a difference and yes alot of Cubans do deny their african heritage. the difference being the same as other latinos who deny the same it is as simple as Dayinira saying she is not black and Paulina saying the same thing who has a better chance of being believed? And as it were there is a debate by sociologists about the extent to which Cuban population is Africa derived. This is because race matters even to governments. Cuba has a large tourist industry.

Just stop using the Latino label. It is a colonial term forced on Indigenous and African people. It is genocide. Do your research.

Have you ever been to a Dominican Salon? My Mom’s friend who worked there said that they would talk in another language and instruct the hair stylists to use harsh relaxers and hair irons on the black’s hair.

That’s so wild! Guess who’s not taking her nappy head to DR !!! Like the antiblack & self hate is real

Yeah and this was when I used to get perms…the perms burnt my hair and at the time my mom thought that I was being stubborn > _ > …I was about 10 or 11 and then when they were about to flat iron my hair, it was so fragile that my hair smoked black, and the lady blamed it on me for not being “patient“enough.

Not all dominicans deny they are black..i wish people would stop generalizing just for the sake to prove a point. The difference between cuba and the dr is thay cuba has a 99% literacy rate and they are not ignorant like dominicans who don’t have the proper education and most don’t even know how to ready or write properly. The issue goes deeper than what people want to see on the surface. In the midst of all the tragedy that is going on right now in the dr, i think people need to understand the root of the problem and… Read more »

You just did what you accused others of doing. You generalized DR and said that all dominicans are ignorant and don’t have proper education. Really? I beg to differ. When you want to make a point, just make the point. But don’t go stupid and far fetched to support your argument. It makes you appear ignorant and prejudicial. Why the heck are we fighting A against B against C? Make the B point and leave A and C out of it.

I am fully aware of that- I have never lived in the US but I have lived in Spain and Peru and the small amount of black dominicans that I have come accross did not deny their blackness . I did not make that assumption with my statement. That being said like you mentioned yourself DR has so many racial issues that can’t be denied. Whereas Cuba is being praised for this event, the DR is kicking out 2nd and possible third generation haitians out of their country, the reason behind it is racially stemmed. That’s why I told la… Read more »

It doesn’t take literacy to know that you are of African descent. The problem is that the majority of DRS have self-hate issues, brought on by Europeans; colorism is deep throughout the diaspora which is linked to self-hate. DR have such a bad reputation where it concerns being of African descent. I think it’s the worst I’ve ever seen tbh.

Absolutely, other countries need to take note and recognize that our natural hair is ours and we love what God gave us.

Yes definitely, its always refreshing to see our God-given features being celebrated 🙂

I love the hair of Ms. Felicia Solano. Gorgeous!

These women are beautiful and so is their hair. Congrats to Sra. Feliciano. I’m so glad she won. first runner up is hair crush material.

Afros are back-yes. My hair doesn’t like chemicals, especially perms. So I am glad to be back to my natural. If Charleston can keep a losers flag I can certainly embrace my heritage.

I was in Cuba on June 13th and did not know this event was taking place. I plan to return and would like to connect with the organizers of this event. We were also looking to connect with Afro-Cubans while there and were unable to find them in mainstream locals. Praying someone will connect with me for more information.

My name is Keisha Monique and I organize Afro-Cuban tours. I was born in Canada to a Cuban-Jamaican family and have been living in Cuba for 3 years. We are an all Afro-Cuban company living on the island and abroad offering authentic tours focusing on our culture in Havana and one throughout the island that travels to Santiago and Guantanamo. We have one coming up on October 28-November 9, 2015. If you would like more info, please email me at keishamonique.art@gmail.com.

lol.…the article said 60% of Cubans are black so it’s kind of hard to miss them.……how did you not find the afro cubans if most of the population are made up of them?

The contestants are so beautiful! Glorious hair full of care and love, and glorious smiles full of joy and pride.

So obviously you aren’t really from SC.

Thanks for the awesome quote! I like to collect them :3

so beautiful! my heart is singing! <3

This makes my heart sing. You go Cuba!

Hope one day this will be televised!

I’m sad that my sisters reject their natural hair these days. its as if all that Black power stuff of the 70’s got lost somewhere. I fully support Cuba in this!

But black hair is better.

The biggest benefit is unseen very often. It is felt and brings appreciation. Cuba is advanced in many regards. This could soon be one of them.

dominicans dont deny thier blackness they accept all of their mixture why do you americans hate when people call themseleves mixed? you all have issues

it was not forced on them.….the Latino label was created because the Latino community wanted to be represented since they were not considered white or black…so a name was created for them so they can have a say in government and get equal funding for their cultural needs.……go Google it.

Aint nothing more beautiful on this earth than an African woman who lives in the glory of her Africaness. I know. I live with one such woman. Love you all.

I’m glad that they are acknowledging the ones who accept their heritage. I can’t say the same for DR, everyone pray for the Haitians & “black looking/passing” Dominicans being deported. I hope they are all well, but I love their hair so much! Beautiful ladies.

This is a good look for Cuba!!

I so love them afro. I want to see more of it ?

Organize one in South Carolina. I dare you! All three competitors will be there.

I have to agree with you I am Marion visiting my mom and dad . I have natural hair and all I get is stares like I have a disease. My younger cousin told me last night what happened to my loss I told her I took them out and she said I shouldn’t have kept them.

I love… Good for you Cuba, embrace the true beauty and richness of the original woman who had coarse hair… Congratulations!!!

I think it’s wonderful because all hair is good hair.

I think is is long overdue, the effort to recover or salvage self respect and pride in one’s natural self, that is part of one human dignity, self appreciation.