Since the slaughter of 9 people by terrorist Dylann Roof in the historically black Emanuel African Methodist Episcopal Church in South Carolina, there have been calls for removal of the Confederate flag from the state’s capitol. 30-year-old activist and filmmaker Bree Newsome decided to skip the rhetoric and go straight for action, removing the divisive symbol herself. Donning climbing gear, she scaled the statehouse’s 30-foot flagpole and removed it.

“We removed the flag today because we can’t wait any longer,” Bree said in a statement. “We can’t continue like this another day. It’s time for a new chapter where we are sincere about dismantling white supremacy and building toward true racial justice and equality.”

Newsome was arrested by waiting police as soon as she descended the flapole, and quoted scripture as she was being carried away. She posted bond and was released from jail on Saturday afternoon.

During the civil war, the confederate flag was adopted as a battle flag by the Army of Northern Virginia under General Robert E. Lee. Since then it has become a symbol of Southern culture and heritage. Historian Gordon Rhea;

“It is no accident that Confederate symbols have been the mainstay of white supremacist organizations, from the Ku Klux Klan to the skinheads. They did not appropriate the Confederate battle flag simply because it was pretty. They picked it because it was the flag of a nation dedicated to their ideals: ‘that the negro is not equal to the white man’. The Confederate flag, we are told, represents heritage, not hate. But why should we celebrate a heritage grounded in hate, a heritage whose self-avowed reason for existence was the exploitation and debasement of a sizeable segment of its population?”

So who is Bree Newsome? She is a graduate of New York University’s prestigious Tisch School of the Arts and a North-Carolina-based activist who was also arrested during a sit-in at the North Carolina state capitol for protesting voter suppression efforts.

Since her courageous act #freebree has been trending on Twitter, and filmmaker Ava Duvernay referred to her as a “black superhero”;

Yes. I hope I get the call to direct the motion picture about a black superhero I admire. Her name is @BreeNewsome. pic.twitter.com/BgMeaNsbYk

This drawing of Bree, by artist Rebecca Cohen, has also gone viral; 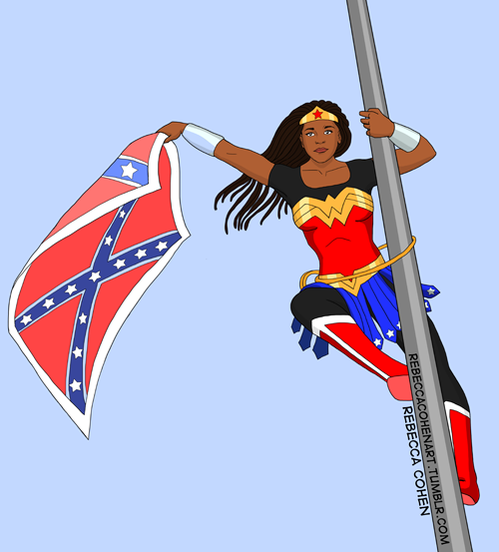 As for the Confederate flag, it was re-hung an hour after Bree was arrested.

Whats the point of taking down the flag, its not gonna change anything .

Its better to know who is racist than finding out they are racist so you can avoid them altogether and its apart of black history, everyone should know that America is still racist instead of hiding a flag to pretend that racism is over..

Its still a step in the right direction…