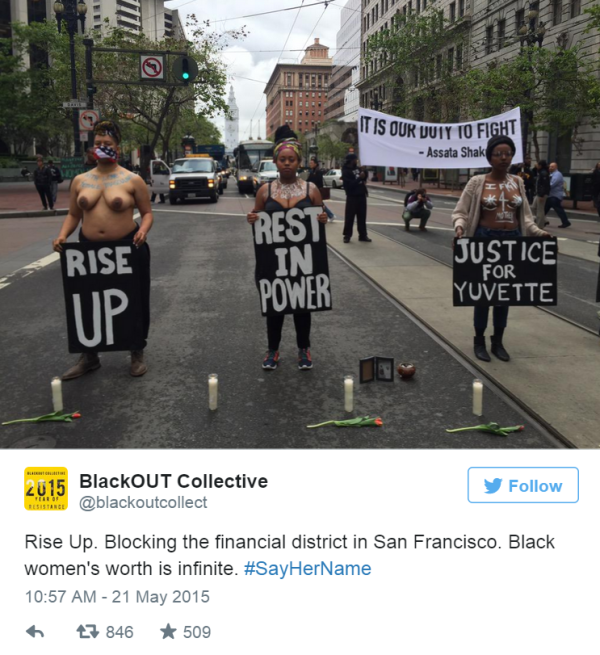 A group of protestors in San Francisco used their bodies to make a political statement when they marched topless to protest police killings of unarmed black women. The protest, which took place Thursday during morning rush hour, commemorated victims like Rekia Boyd and Aiyana Stanley-Jones. The group of protestors is called the BlackOut Collective and one of their founding members, Chinerye Tutashinda, explained why they chose to march topless;

“We wanted to be able to say ‘enough is enough’ and draw on traditions from Nigeria, Gabon, Uganda, and South Africa, from women who bare their chests and other parts of their bodies in protest” 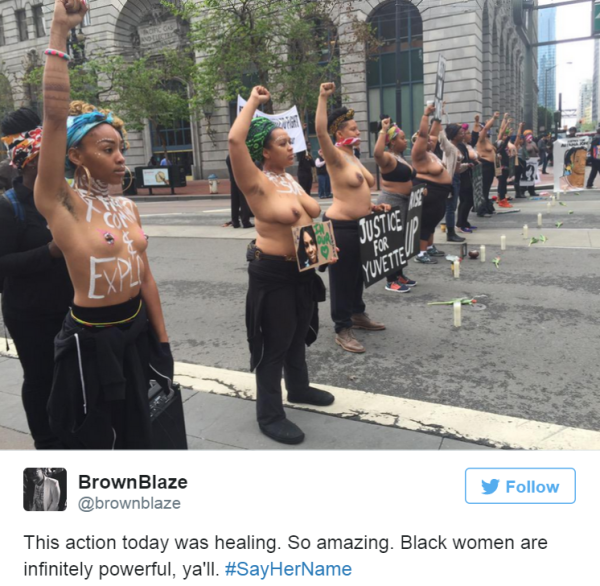 Tutashinda is correct. Back in 2013 OkayAfrica.com, an offshoot site of OkayPlayer, wrote an insightful piece on the African origins of topless protest.

“What is arguably one of the most powerful manifestations of naked protest over the past century took place during the Women’s War in Eastern Nigeria (1929) and was a significant manifestation of black women’s resistance to colonial authority and racialised Western notions of the body. The significance of the history of this method continues to manifest in naked protests, which have taken place in West, East, and Southern Africa as recently as December 2012. Yet these black women and their unyielding fearlessness to literally put their bodies on the line and stand against multinational oil companies, corruption, and violence, receive little visibility in the mainstream. Sometimes, even in their own countries, their commitment and strength is dismissed as foolish, unfruitful and futile.” 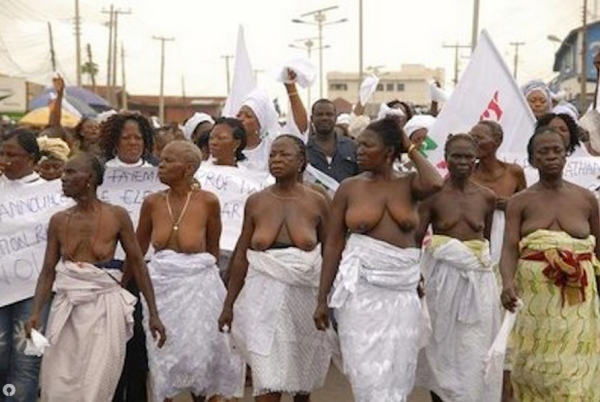 As for the reactions they received, protestor Rose Berry, said they were overwhelmingly positive;

“There were black women on their way to work who stopped and cried, thanked the women who were protesting… We wanted to kick off the day, give them a dose of black women’s liberation with their morning coffee. We won’t be ignored anymore. We’re not invisible. We’ve never been invisible.”

Check out some brief video of the protest below:

“Too often Black women are ignored.” Poetry from this morning’s action. #SayHerName pic.twitter.com/23Bb4xZYVS

Ladies, what are your thoughts? Check out the BlackOut Collective’s Twitter page for more information and images.

Maya angelou was once a prostitute and had no shame of having used her body to support herself.
Did you even read the article though? These women are merely showing their breasts and you freak out. Chill.

She was?…I missed that.…which book and why is that relevant here if true?

She was never a prostitute! She was a stripper, get your Facts right…

The academy award for missing the point goes to…

Over It
Reply to  BlueCornMoon

You are free to think whatever you like, however, Cecily, Oprah and the great Flotus have done how much to highlight these issues? Much less ‘get things done’ from their positions of power and influence. The actions may not suit the conservative tastes of some, but I believe this is what makes these protests more powerful. Those who cannot move beyond the bareness of their breasts show themselves to be the socially conditioned followers they are. These women are baring themselves and therefore intentionally making themselves physically vulnerable, as were the unarmed women who were killed. This is an intelligent… Read more »

Maybe you should read about the history of this type of protest by Black women in other parts of the world, then it would bring more understanding. My artistic research deals with the Black Female Body so I plan to do so as well.

THis brought me to tears. THe black female body is typically seen in the context of being sexually objectified or comedic relief. We do not own our bodies in the public. These images are controlled by our counterparts who are either pimping us or dressing up like us a perpetuating stereotypes. Yet for us to choose to be nude for our own benefit is not an acceptable way to be seen in the black community and in our society. For them to disrobe is to force people to see them and see them as women, something our society struggles with.… Read more »

I appreciate their dedication to making sure that they won’t go unnoticed and unseen by the world.

Other than that I won’t pretend to not be too westernized to be confused. I get it, but I don’t got it. Even with that said, I support it.

Just because something isn’t understood, doesn’t make it invalid.

Wow! At first, I was a little iffy about this, but then read the history of this style of protesting and thought wow! Does send a strong message of the power of our womenhood. It’s about time our issues stopped being ignored.

At first I thought, ok they’re topless what’s the point of that. After the explanation of the african origins of this type of protest, I realized how powerful this actually is and how brave they are. As black women our bodies have been objectified, used, and exposed without our consent for hundreds of years. This makes their choice to expose themselves so powerful. Here are real black women, not models or fitness fanatics using their beauty to bring attention to a real issue in a non-sexual way. It is a form of public grieving and outcry against injustice. And if… Read more »

Thank you. You said it so well.

Fix it
Reply to  Aliya

The orgin of why they are topless is not going to be immediately recognized by people passing by.

It just going to make the perverts happy

While I agree with your assessment or the origin being missed, does it REALLY make a man a pervert to enjoy the sight of beautiful half naked women?

But it will make the perverts happy along with everyone else.

Loooolll. I don’t even know where to start laughing from. I have lived in Nigeria all my life, and plan to live here forever, yet I have never seen where women go topless in protests. For these people to take a one-off event in the oldies, which many of us never heard about, and called it our tradition is .…. ehm (I can’t even find an adjective). Please go topless if you want to go topless, but stop alluding it to something that does not exist.

Actually most protests by older women and women in more traditional setting in Nigeria are topless, check your history. FYI I’m also Nigerian and there was a topless protest by women in ogun state a couple of years ago. Just saying, posting of the bat like that with unverified facts makes you seem a little ignorant.

Sigh, that’s actually not true. A lot of young Nigerians are very ignorant about their culture. Protesting naked or topless is a very ancient part of many Nigerian cultures especially Igbo, Yoruba, and Edo, and it sends a VERY STRONG message. For many Nigerian cultures to strip naked in protest is a protest of the HIGHEST order, and it can be carried further. For an elderly person to strip naked in protest of something you have done is the MAXIMUM curse. I too was born and have lived all my life in Nigeria. It’s not something you see every day… Read more »

Actually Lola, elderly, not young, women go topless in Nigeria. I’m Naijan myself and I remember a while ago during Tinubu’s tenure when those Iyalojas protested something and went topless on the streets of Lag. According to the elders, it’s seen as a curse on the person they’re protesting if old women have to strip to be heard, or something deep like that lol. True. Old women not young ladies like these but hey, the meanings I guess are the same.

It’s sad that a female would take off her clothes.

Do u not take off your clothes to bathe have sex some sleep with on clothing. It only because vulgar because a bunch of horned dogs white men couldn’t control themselves and made everything about sex.

This will not be news in the UK since one of our national newspapers have a topless woman on page 3 nearly every day!The only difference is that she is mainly white and not protesting!

I couldn’t agree agree more. I take my hat off to these sistas.

WOOAH!!! I’m just.….BLACK WOMEN standing up for other Black women!, I find something so powerful about these images. I never thought I would see this.EVER!..I mean it’s been almost 4 decades of b****es and h***s music and hardly a peep out of Black women…I’m speechless. Let’s see how many comments this article gets compared to some others where the loud mouths show up to argue about stupid crap…

[…] it has gotten the most attention as an act of protest by women in Africa (and, occasionally, in the African diaspora). In the early 2000s, international attention fell upon a group of women in Nigeria who shut down […]

Collective Work & Responsibility: 6 Stories from 2015 That Highlight the Kwanzaa Principle of Ujima | black-hair-salons-near-me.com

This brought me to tears. The black female body is only seen in the context of being sexually objectified or comedic relief. This is not an acceptable way to be seen in the black community and in our society for every day average black women. For them to disrobe is to force people to see them and see them as women, something our society struggles with. What makes it so powerful is the very unlikeliness of black women doing this here. It expresses the desperation so many of us feel in being invisible. While non-black women traditionally benefit form the… Read more »

I am a black woman, and I have never felt I was unprotected or not viewed as a lady. Never have a problem with men holding doors for me, waiting until I get out the elevator, respected, told I’m quality. I also look and act like lady which makes the difference.

I understand the point butttt… there are other ways to make a point, we live in a world FULL of PERVERTS, and no one’s going to pay attention to the message why not make a point with your clothes on??? These women are.……idk alI I can say is I can make ANY point with out being nude, there have been many women who didn’t have to take their clothes off during the Women’s Rights Movement

I am not feeling all this public nudity. It’s vulgar to me. Can’t we protest and preserve our dignity at the same time?

You are very correct Tina. It absolutely doesnot make sense for these females to be topless. They can do that with their clothes on, 3–19-16

Black people, we have got to support each other!! We have got to stand united and speak out against against white men killing our people. And they have the nerve to get upset over the killing of a lion.