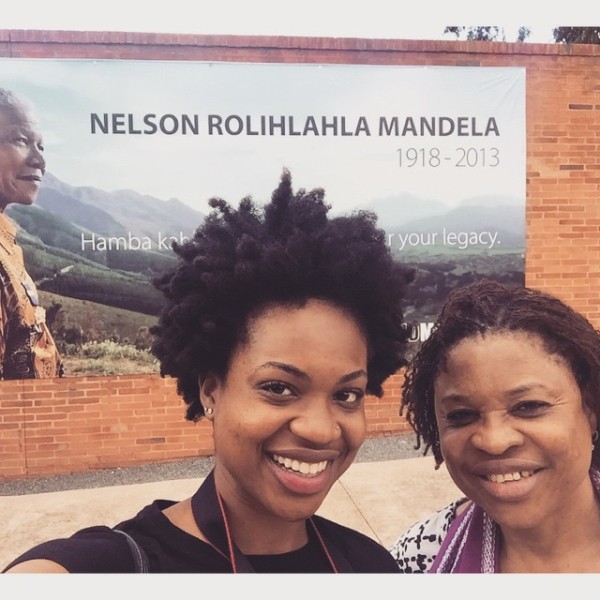 The author with her mother

There have been a few spotlights on natural hair’s rise in popularity in different African countries, such as the Ivory Coast, but rarely do we get accounts of the movement from the perspective of folks who are familiar with the movement here. Luckily, I had the opportunity to visit Johannesburg, South Africa a few weeks ago and get an inside look into the up and coming natural hair movement at the Johannesburg Natural Hair Meetup.

What people are thinking

At the meetup, one of the biggest concerns expressed was the acceptability of natural hair in the workplace. As in the United States, women in all fields of work felt empowered enough to wear their hair natural to their workplace — from media to business to law — but others in those same fields did not feel comfortable. Pushback against natural hair came from all directions: people’s families, their white South African coworkers, and their black South African coworkers and friends. The second biggest concern was the lack of availability of natural hair care products that we’re so used to in the US. However, South Africans have created their own natural hair solutions on their own, such as Nubian Nature, Africa Grace, Afro Amour, Asili, Earth Products, and many more.

Although the natural hair movement is only a few years old and has yet to gain traction amongst college-aged youth, there were a variety of natural hairstyles that I observed both on the streets and at the event. In the streets of Joburg, the most popular natural hairstyle was a cropped Caesar haircut, about a half an inch off the scalp. A good number of both men and women had dreadlocks, a higher percentage even in natural hair meccas like New York City and cornrows and braids were also very popular. Longer loose natural hairstyles past TWA length were few and far between, and I saw maybe four women with crochet braids, but most were worn undefined, not dipped and curled like we’re fond of doing here in the US. Surprisingly, unlike in West Africa, very few women wore head coverings, both in the downtown business district and in the more hip neighborhood of Braamfontein.

At the event, there was a mix of fros, twistouts, locks, cornrows and a few braids. Check out the gallery of photos from the event below!

What do you think of the spread of natural hair throughout the world?

I’m from South Africa and I’m 19 and I agree with you , people my age aren’t really into natural hair but it’s slowly , VERY slowly growing among university students and school going children. The most common hairstyle among people my age and in school are box braids/twists it’s pretty much the standard black school girl style . The majority of black women in South Africa do not know how to look after their hair . South African women/ girls generally have terrible short unhealthy hair because the vast majority don’t know how to look after their hair .… Read more »

I’m also in South Africa and I’ve seen a huge boom in natural hair care, especially in the last two years or so. It’s like everywhere I turn women are wearing their hair naturally, loose or in locs. Not sure what’s happening on the uni and high school fronts, but it’s definitely catching on. Most SA naturalistas on instagram are hovering somewhere around shoulder length — armpit length (myself included) so it will be interesting to see us all go past that stage in the next few months/years. Then we’ll be seeing more long-haired naturals around 🙂

That’s like me ! I’m two years post relaxer in a week and my hair is a little past shoulder length . These next few months are crucial because then I would’ve gone past a point where my hair has been longer than it’s ever been so I’m also excited to see what happens in the next few years !

lol. I’m also 19!and been natural now for a year and a half (: its true.natural hair on campus(im in third year) is emerging too but i hope they’ll be interested in it enough to retain length past neck length.

Goodluck, Lola! Hopefully you’re an inspiration to the ladies (:

I’m Zimbabwean and here, a duo of Zimbabwe ladies are attempting to bring natural hair on the scene in Zimbabwe, Zambia, Malawi and Mozambique. Their FB page https://www.facebook.com/themaneeventzim/ They have also opened a natural hair salon in our capital Harare and they have also tried to bring in a array of products for us. They too are working on product lines. We appriaciate their efforts though I think it will be a bit of a while before people here fully realise the beauty of natural hair.

I went to South Africa two years ago. I thought everyone around me would be sporting a head full of their own curls in varying lengths and styles. I was completely wrong. I was the odd person out. It never occurred to me that they would be sporting straight hair, weaves, wigs. etc.… I hadn’t realized how much my view of Africa was tainted by my upbringing and American-centric news. It was really shocking. I just knew that their would be a bunch of afros with picks like some 70’s film. It really never occurred to me that African’s would… Read more »

Mka B
Reply to  Stephanie Palmer

I’m Kenyan and I will readily admit that our culture has been eroded by Western influence. The fact is, we all follow American trends. You’d think that Africans would be the one’s leading the natural hair movement, but even in this one, we’ve taken our cue from our American sisters. I never knew how to take care of my hair until I started frequenting sites like this one and watching YouTube videos by black Americans.

lis
Reply to  Mka B

Awww.…it doesn’t matter how, when, or why you started…just keep at it …it’s all worth it…have fun and enjoy and good luck on your natural journey.

I think it’s great and I follow quite a few Nigerian sister and African bloggers. I have learned a lot.

Giiirl!! I been natural. Google isicolo — its a South African hairstyle Americans always pin — natural hair is made to look like a hat of sorts. I was at the event, and you’re a lovely girl btw. But daaamn, we been natural — so natural in fact we don’t have blogs / videos / etc

I agree. We have been natural. I was always cutting my hair. Growing my fro and relaxing for years. Two years ago I decided I wanted to go completely natural. My hair was dry and I was washing it everyday just to be able to style it. I was tired of dryness and knots I was thinking to relax, until I decided to google afros, and discovered this blog and others and learned there is a better way to care for my afro. We were there, but not in a movement. Since having natural hair I easily spot naturals all… Read more »

This is great that South African women (and Black women all over the world) are embracing their natural hair! I’m loving the movement. But I can’t ignore how sad it is that women in Africa of all places are slowly learning to love their hair. I’m glad that we are disregarding outside influence when it comes to our appearance!

They all look BEAUTIFUL! Loves it!