How I Went from TWA to Back Length, Part 1; Ijeoma’s Story

Many black women have been led to believe that retaining length in their hair is virtually impossible. But with the right regimen and knowledge, it doesn’t have to be. This week, four BGLH writers will share stories of how they went from TWA to back length. They represent a diversity of hair textures and life experiences. We hope that you gain inspiration and information. Our first feature is from Ijeoma.

Even though I didn’t big chop with the intention of growing my hair to a certain length, I managed to gain significant length in my first 2 years. I big chopped in May 2010 after transitioning haphazardly for 10 months, so I started off my journey with about 4 inches of straightened hair. 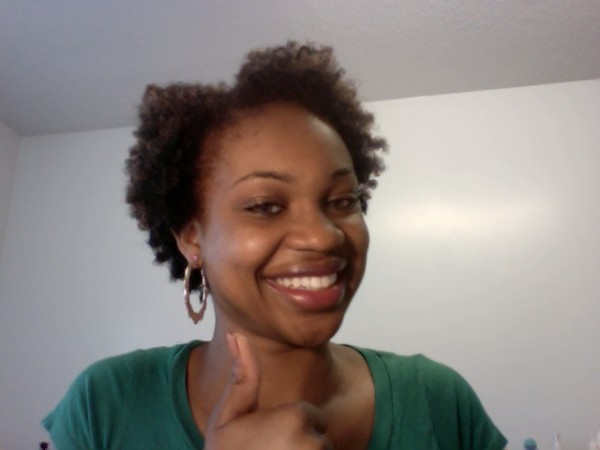 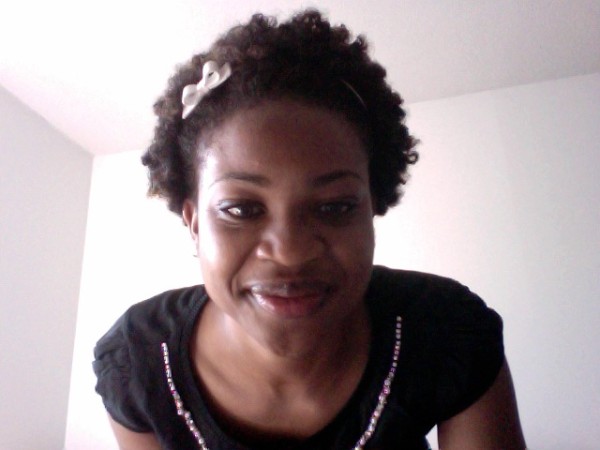 Early on, I focused on getting to know my hair, experimenting with biweekly washes or cowashes, different cheapie drugstore conditioners (I settled on Aussie Moist), and not doing much styling outside of twists and bantu knot outs. Shea butter and coconut oil were my best friends, and I insisted on mixing my own concoctions at home. Eight months after my big chop I set out on a protective style challenge, where I did mini twists, flat twist updos, and other protective styles using my own hair that I believe contributed to my growth. However, all my protective styling somehow equated to me not ever trimming my hair, so in April of 2011, I realized I had made the first of many mistakes in my hair journey. I had my hair straightened at a natural hair salon and they informed me that they had to cut about 2 inches off of my hair. Now you might be skeptical, but I had not trimmed my hair AT ALL since I big chopped, so I had a foolish amount of dead ends that had to go. The second biggest mistake was a terrible dye job in August 2011 that left my hair over processed. Despite setbacks, by December of 2011, my hair had flourished to armpit length with just a tension blown out. However, by February 2014, my hair — again tension blown out — was only a few inches longer, though much thicker. If my hair had grown the same rate in 2012 and 2013 as it did in 2010 and 2011, it should have been waist length — but alas it wasn’t. So what went wrong? 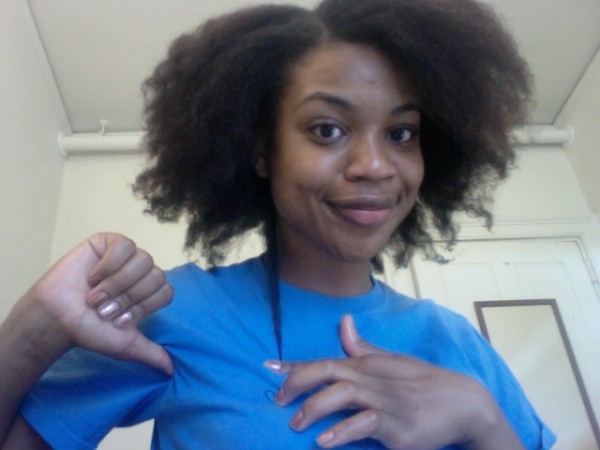 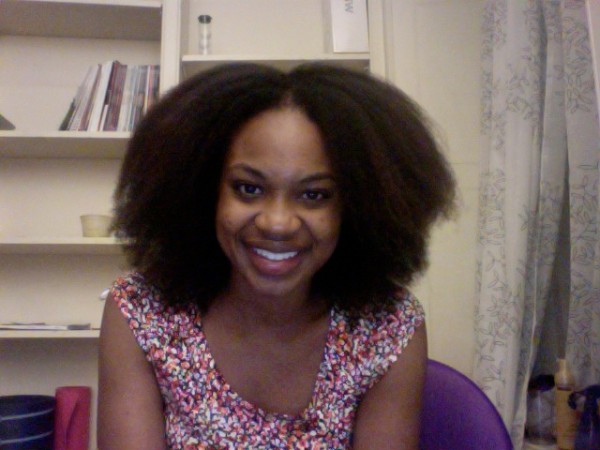 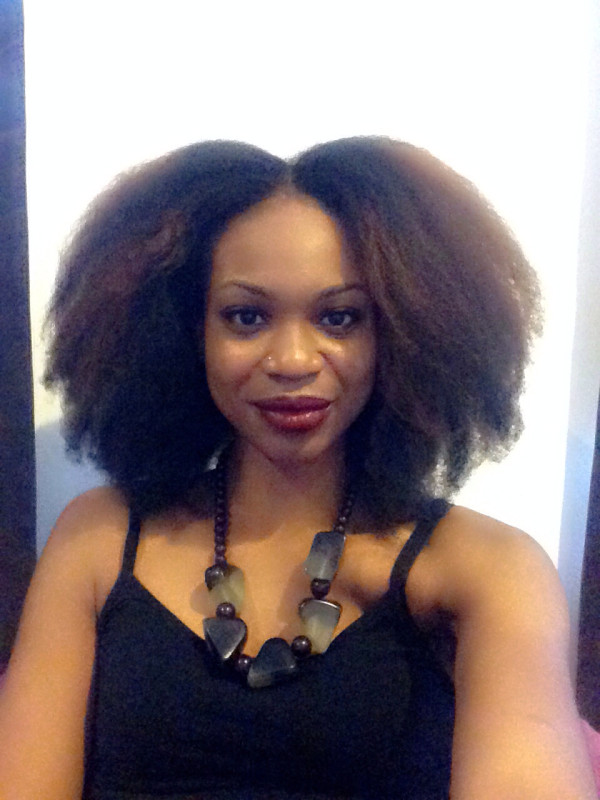 Two main things: one, I added a lot of color in my hair in the summer of 2013, without compensating with more moisture. I got lazy with my regimen, as my hair was long enough to always be pretty in a puff, bun, or updo whenever it was too dry for be out. I also experimented A LOT with different hair products in 2013 and 2014, in efforts to conduct reviews on my site. Once I realized my hair was long but not it’s healthiest (since it wasn’t showing any length gains), I made some changes to my regimen by using fewer products and more protective styles such as wigs and crochet braids. Out of boredom, I cut my back length hair into a tapered fro a couple of weeks ago, and while length is again not a primary goal of mine, I am being more mindful of my length progress as an indicator of the overall health of my hair. I’m not sure whether or not I’ll let it grow back to back length again, but I know it’s possible with my hair! 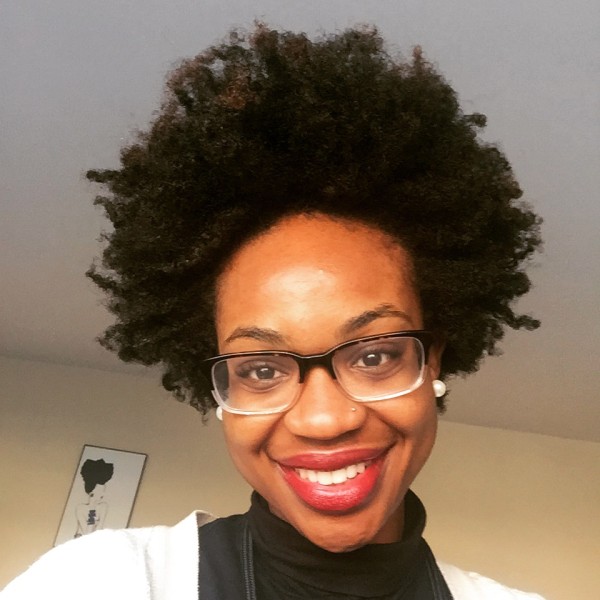 Can you relate to any aspect of the hair journey? Where are you in your growth process?

You and your hair look lovely sis! Thanks for sharing your story!

such a cute lady 🙂

I made the mistake of not trimming my hair as a new natural until almost 3 years after my big chop. Big no no! When I had my hair professionally flat ironed for the first time, I ended up having to get a lot of hair trimmed. My hair looked and felt better, but I could have avoided cutting so much of the length if I had trimmed along the way.

April marks 2 years natural for me, and I learned early on that trying a bunch of products wasn’t for me. Shea Butter and coconut oil are mainstays for my hair. I also make my own concoctions. Protective styles are the keys to my hair growing. My 13 year old on the other hand, has lost hair and I’m not sure where we’ve gone wrong. I think hormones is playing a part and her constantly scratching sores into her scalp. I keep her hair moisturized and I use Jamiacan black castor oil on her hair. She has 3b/4a type hair.… Read more »

her scalp may just not like the castor oil. I love the way it makes my hair “feel” but I would scratch all the way down to my brain if I could cause it would irritate my scalp soooo bad.

Pretty girl and pretty hair. I think everyone’s hair is different to be honest. I started my natural hair journey in 2011. I big chopped and used all the “right” techniques to maintain it. Come 2012, I had only gained about a quarter of an inch. I tried products, advice from trusted 4c naturals who started off like me and ended up with so much growth. Meanwhile my hair was healthyish but oh so short. So in 2013 when I was staring my long lost pack of relaxer in the eye…I remembered that as a child…my hair was thick and healthy… Read more »

personally, i did all the right things. I had to go through 5 different stylists who agreed that I was doing the right things: not manipulating my hair often, use minimal products, 97% in protective styles, and moisturize weekly, as well as oil and seal. 2 years with no length retention (after my first 2 years of massive growth after Bc’ing) , I was suffering from dryness (no matter how much I would DC and moisturize) and my scalp was always dry and flaky. I had experimented with extending/shortening wash days, and using as many natural products as much as… Read more »

Great story Ijeoma, case studies like this are important. It gives proof and encouragement to those who once thought it was impossible. You and many other show that it’s not only possible, but beautiful women are doing it left and right.

I know right. Strangely, I’ve never been a product junkie. Before I become natural, I listed a number of products I’d use, which I never ended up using. And I’m fine with that. My hair is 4b/c and I cut my hair March 2012, although I’ve never actually trimmed my hair.
I use black soap for my hair, mixed with honey, and some essentials oils.
Of course, you can go wrong with Shea Butter. I won’t say I particularly take really good care of my hair but it has really grown. I guess different things work for different people.

Wow I can definitely relate. Between 2013–2014 I noticed a major stunt in my hair growth.1) I experimented with hair colour and struggled to maintain proper moisture 2) I experienced a lot of stress from school which I picked up a bad habit of “stress cutting” ( I would get super fed up take it out on my hair for a trim and just chop off 2 inches or so…) Very bad habit. 3) I stopped caring as much about nurturing my hair in comparison when I did my big chop in 2012. However, its 2015 and just recently I’ve… Read more »

I cut my back length hair in September due to boredom and I’m still bored. I recently had my hair braided into a beehive bc I was tired of my hair & was going to try wigs. I lasted 9 days. I hated wearing a wig everyday, I’ve never been one to put my hair away since returning to natural over 4 yrs ago. I think hair should be enjoyed so that’s what I need to get back to, which may mean cutting it shorter for me.

I can relate to the problems of experimenting with different products and suffering setbacks when some of these products do more harm than good.

Thanks for sharing your experience. Although I have significant length, there is always something that is keeping my hair from being its healthiest. So I am also focusing on moisturizing and adding protein, as well as, protecting my ends. Especially with color in my hair. May I suggest Tameka McNeil-Johnson aka JadedTresses? She cuts/trims my hair and also colored my hair last August. My color still looks awesome from August. I hope all works out for the best for your hair!

My name sake! Your hair is beautiful. I too have gotten lazy with my hair and I’ve noticed it isn’t thriving as it did my first two years as a natural. This has motivated me to get back on a consistent regimen.

I’ve always been determined to keep things simple and despite having breakage in my front section (possibly just a weak spot), I’m on track to have at least some hair that’s close to 12 inches at the two year mark in July. I’ve done my share of aggressive detangling early on, but I think Afro textured hair is a bit more resilient than we give it credit for. My hair has still grown. I do nothing special and manipulate in moderation.