When I was a young girl, my mom would sometimes style my hair in what many of you now recognize as “African threading”.  The threaded style has a history of popularity in Africa, but is certainly not the only unique style of that region.  Here are some more beautiful looks from around the continent.

1. Braided hair of the Tuareg women (primarily in Niger)

Tuareg are a semi-nomadic group and mainly live in the southwestern parts of Niger, Mali, Burkina Faso, Libya, and southern region of Algeria.  One common hair style of the women and girls is the beautiful braided styles close to the scalp as seen in the following photo.  The women primarily keep their hair styles covered while the girls do not. 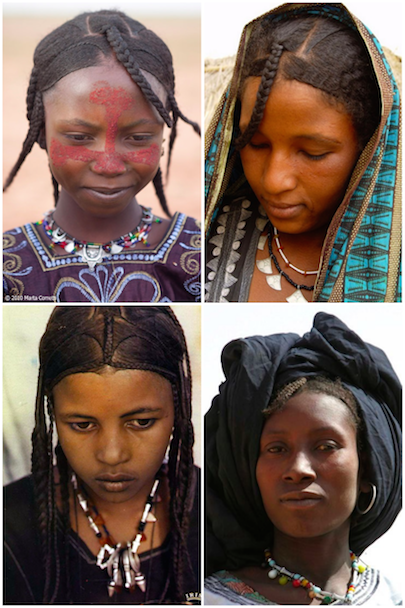 Wodaabe, a subgroup of Fulani, are traditionally nomadic with migrations extending through southern Niger, through northern Nigeria, northeastern Cameroon, southwestern Chad, and the western region of the Central African Republic.  Many of the women and girls wear a braid on each side with the crown and bang hair sculpted into a pompadour-like structure. 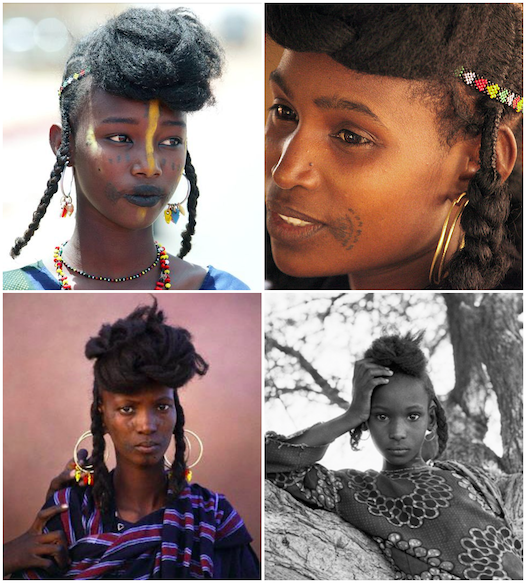 The Hamar inhabit the Omo River Valley in southwestern Ethiopia. According to one source (Ardi Ethiopia), the Hamar women “illustrate their welfare and health by mixing together ochre, water and binding resin, rubbing the mixture into their hair, and then twisting the strands to create coppery colored tresses known as goscha”. 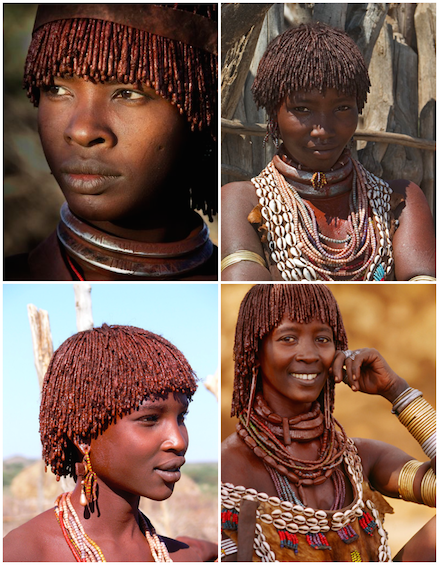 4. Intricate braids of the Amhara and Tigray-Tigrinya (Ethiopia, Eritrea)

“Women in Tigrai [Tigray] might wear a variety of hairstyles based on their age and marital status. Young girls shave their hair on the side of their head leaving some hair at the back of the head and around the head. The shaved part slowly closes over the years.  By the time a young lady is married and has a kid she officially enters womanhood and she wears the fully braided hair do. There are many styles of braiding from the very fine called gilbich to a course one called albaso.” 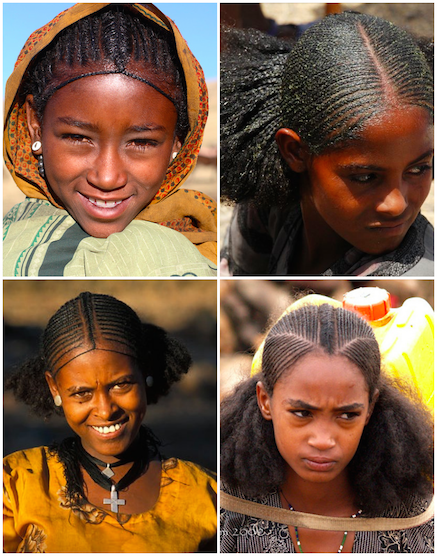 More Tigrays: “There are many styles of braiding from the very fine called gilbich to a course one called albaso.” Source: tigraionline.com

Finally, Mumuhuila (or Mwila) are indigenous to southern Angola and the women are known for their intriguing hair style.   According to photographer Eric Lafforgue (linked on Beautiful Afrique):

“The women coat their hair with a red paste called, oncula, made of crushed red stone. They also put a mix of oil, crushed tree bark, dried cow dung and herbs on their hair. Their hair is decorated with beads, cauri shells (real or plastic ones) and dried food. Having their forehead shaved is considered as a sign of beauty. The plaits, which look like dreadlocks are called nontombi and have a precise meaning. Women or girls usually have four or six nontombi but when they only have three it means that someone died in their family.” 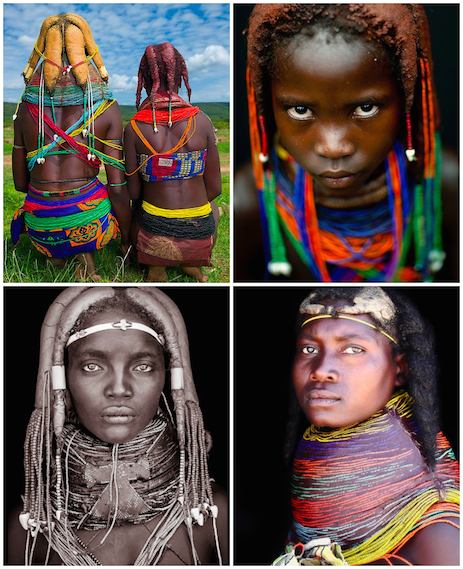 What other unique African styles do you know about?

There needs to be a tutorial on some of these omg

Very interesting!!! You can tell its in our blood and lineage for us to like or prefer certain styles even though it may not be considered “beautiful” “mainstream” or even “standard” in the society we grew up in.

Yes! I agree deeply. I should’ve read your post before writing one myself but i was just so taken by the tradition…

Beautiful ladies and hairstyles. The 2 pics in black & white look like they could be in a high fashion magazine.

please do more!! this is so interesting!

These are all very beautiful, even the one with cow dung.

God, all of these women are prefect and beautiful in every way.

The clay ones seem so difficult to wash out! But I guess you wear them for awhile

This is cool. I really like the last one on the women of Southern Angola. Its the most traditional and organic, minus the plastic that china has made so readily available. Most importantly, i appreciate how the different types of color and number of plaits represent different meanings. It seems practical as opposed to the BS we do here in America all for the tradition of fitting in or being cool.

I would really like some of the images separately but I’m having trouble finding them from your sources, is there any way I could retrieve them from the author??

Send me an email.

Just tried to find your email address and having problems with this too! Lol and I thought I was good with the internet…

I am so happy to see my home country Angola, represented in these photos, my mother always used to tell me about the Mwila people and their hair and how beautiful, thick and long they were

How awesome! Posts like these really do embody the site name “Black Girl Long Hair”. I love seeing traditional styles like these.

Perhaps you are alternating the oil with butter? Can you state your source? I need to be certain before I make such a change. All the references I’ve seen state that the Mwilas use cow dung. For example: A photographer who visited the tribe: “Mario says: ‘Using elements such as butter, oil, cow dung and herbs, these fascinating women can create a style out of almost everything. ‘Beads, shells and colours from stones help them to create their masterpieces.” — http://www.dailymail.co.uk/femail/article-2860409/Stunning-hairstyles-necklaces-worn-tribal-women-Angola.html#ixzz3UGoeiJkw Another photographer Eric Lafforgue: “Women coat their hair with a red paste called, oncula, which is made of crushed… Read more »

Beautiful! Thanks for posting!

Incredibly beautiful and regal images. THIS ladies is why others will try to tell you that you are not beautiful, because in spite of a widely propagated mainstream standard of beauty, ours is unmatched, unbroken and THE prototype.

Although some of us in the diaspora have lost a direct connection to our direct lineage, the roots are not completely severed, just an incomplete picture with missing details. I’m sure many of us have seen variations of these hairstyles in our lives that echo aspects of these indigenous and/or traditional hairstyles displayed above.

Thank you for compiling these Chinwe.

but we do have customs and a rich culture. unfortunate you don’t recognize this.

This is great. I’m going to try one of these out for my son’s cultural day at school. Thanks for posting.

You’re right some was stripped away but I promise if you dig, you’ll find much is still there. Maybe a remixed version of it, but it’s still with us. African American women have always been known-sometimes teased-for doing really epic and interesting things with our hair. Just because it’s presented as being “ratchet” or hood or doesn’t mean it doesn’t hold any significant cultural value.

I agree. I am from rural South Carolina and braiding and cornrows were a huge part of black hairstyling growing up. Ponytails and such were usually reserved for one day hairstyles for occasions such as church, picture day, etc. Cornrows were a common regular hairstyle because it kept your mother from constantly having to style your kids’ hair and lasted long. As far as braid extensions, I always had a cousin to go to and never knew anything of African braiding shops until I ventured away from home. It was nothing to have entire families whose business (both my brothers… Read more »

I’ve always been facinated by the tiny tiny cornrows my African sisters wear so eloquently. So, I asked my sister friend from Senegal to do them. They were beautiful and soo many people were asking did you just return from Africa. She was even nice enough to remove them as well.

Do some DNA test, you might even be able to narrow down to certain tribes. I’m awaiting my results.

Awesome post!! Great read and educational. Our hair is so beautiful.

These are soooo pretty! I love it. These women all look like beautiful fairies and dolls!

What you call Latinos are mostly indigenous, Native Americans who too have been stripped of their culture. Latino/Hispanic are colonial terms and people speak Spanish for the same reason ‘African Americans’ and Native Americans in the U.S. speak English.
Everyone do your research on colonization!

Those are some beautiful women. And, I love the vibrant, colorful clothing of the Mumuhuila ladies.

This is soooo interesting. I love it. I really hate that as African Americans, we were stripped of our traditional culture. I hate that we don’t have traditional customs that we could take pride in. The way Italians, Latinos, Asians, etc do. Just think, some of us came from these cultures, and would’ve grown up wearing these styles. Please do more post like this.

About the Mumuhuilas (Mwilas) the paste on their hair is made out of, cow butter, and the zest from a three bark called Mubungololo not cow dung as stated in the post.