The Struggle Continues: A Timeline of Natural Hair Discrimination Over the Past Year

by Ijeoma of Klassy Kinks

As the natural hair movement gains ground, there is also increasing media and community awareness of the unfortunate times when natural hair becomes an issue at one’s school or workplace. The most recent instance of discrimination against natural hair inspired me to compile a timeline of the past year’s setbacks and steps forward in terms of natural hair acceptance.

WHAT: A Rastafarian male student is indefinitely suspended from school in Louisiana for refusing to cut dreadlocks, which are grown as part of his religious beliefs.

WHY: Student was sent home because dreadlocks extended past collar, which was in violation of school dress code. Student’s parents sent the boy back to school with his hair up off his neck, but the school refused to allow him to return unless he cut his dreadlocks.

WHAT NOW: The ACLU of Louisiana has taken up the case, saying that the school violated the student’s rights as well as religious freedom laws.

WHAT: A Hospital Corpsman 2nd Class at US Navy in Illinois is honorably discharged after twelve years of service for refusing to cut dreadlocks, which she has had since 2005.

WHY: Officials said that Sims’ hair was out of regulation, and prevented her from properly wearing safety equipment, such as helmets and masks. The Navy bans “widely spaced individual hanging locks,” though Sims claims she always wore her hair in a bun.

WHAT NOW: Sims will be pursuing premedical studies at Loyola Marymount College this year.

WHY: Jacobs wears two strand twists, which would have been out of regulation if the grooming regulation bill was upheld and she remained in the National Guard.

WHAT NOW: The petition received over 17,000 signatures, and inspired the military to review and potentially alter the guidelines to be considerate of African American women’s hair choices and options.

WHAT: Army Regulation 670–1 guidelines for grooming are released, and banned several hairstyles commonly worn by African American women in the armed forces, including braids, twists, and cornrows. Language such as “matted” and “unkempt” was used.

WHAT NOW: In August 2014, the U.S. Military relaxed their restrictions, permitting more kinds of braids and two strand twists. Other armed forces areas have yet to respond.

WHAT: Students bully a 12-year old student at a Christian school in Florida because of her hair. The school responds by asking Vanessa to cut or straighten her hair, or leave the school.

WHY: According to school officials, Van Dyke’s hair was a “distraction” to other students, which was a violation of school policy.

WHAT NOW: Van Dyke returned to school without having to make any changes to her hair, but school officials still enforced that Van Dyke’s hair would have to comply with the school’s styling policy.

WHAT: A Missouri woman with dreadlocks has to choose between cutting them and keeping her job.

WHY: The company dress code policy, instituted two months after Davis began working, states that “dreadlocks, braids, mohawks, mullets, and other hairstyles are against company guidelines.”

WHAT NOW: Davis left her job.

WHAT: A Tulsa, Oklahoma charter school sent 7‑year old Tiana Parker home because her dreadlocks did not look “presentable.”

WHY: The school dress code banned hairstyles such as “dreadlocks, afros, mohawks, and other faddish styles”.

WHAT NOW: After a petition requesting a public apology to Parker and a change of the school’s dress code received over 23,000 signatures, the school reversed it’s ban on dreadlocks and afros. However, Parker’s parents had already removed her from the school, and she was sent many wishes from the natural hair community and other supporters. 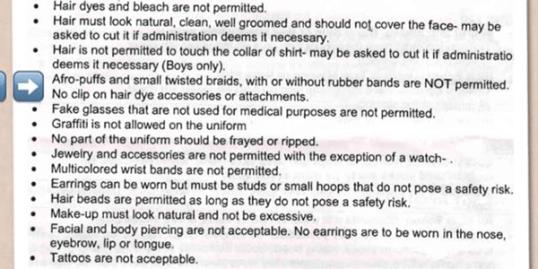 WHAT: A Christian school in Ohio bans Afro puffs, and small, twisted braids.

WHAT NOW: After Black Girl Long Hair brought attention to the issue and parents protested, the school released an apology letter and statement saying the ban would not be incorporated into the dress code.

Read about more occurrences of discrimination against natural hair before June 2013 here.

Do you think we have made any progress with the acceptability of natural hair in schools and the workplace in recent years? Has the natural hair community done a good job supporting other when such cases appear in the news?

I don’t understand why people with natural hair are discriminated against in this day and age, especially by our own people.

Because Selma was only 49 years ago. And many of us were hiding our own natural hair not too long ago, and some of us would have been yes ma’am-ing these same racially prohibitive attempts to regulate our bodies, dignity and independence. Kinky hair ridicule, discrimination, ignorance and revulsion by NON-BLACKS and NON-BLACK institutions is immense. It’s face is hidden behind ‘company’ and ‘policy’ and ‘marketing-demographics’ and private FB posts and tons of hair alternatives (relaxers and weaves) that make them feel safer being around US. Of course we’ve internalized this onslaught of hatred over centuries. However education and demonstrating self-love… Read more »

Exactly, our own Black people find issues and don’t stand up for each other. We are so divided.…

At least the natural hair community is rallying to right these unjustified wrongs.

Imagine that people of color are the only group that has to FIGHT for the right to wear their hair in the way it grows out of their heads.

As the natural hair community is advancing, Some people are purposely trying to tear it down or stop it in it’s tracks.

It’s a good thing that we are such a strong community and we stand by each other in the face of trouble. We’ve changed several anti-natural hair laws in the past and hopefully we’ll change any similar laws that the future holds.

Totally off topic, and probably not going to be posted due to moderation:

Y’all noticed how everything has changed around here and Baby&Blog is stagnant? Look at the very bottom of BGLH’s pages. Wtf is “Totally Her Entertainment”? Google them. We can’t post pictures anymore, but I need y’all to see that all of their natural hair articles are tagged under “Urban”. I didn’t know all Black folks live in cities. We’ve been had, y’all.

whoa. @BGLH, what is totally her ent. and how do I know y’all wont turn into Curly Nikki Part 2??

Over a hundred years of racism, subtle& blatant…either way not as much has changed as it should by now.just seeing kinky, big hair makes most white ppl feel uncomfortable.That kinky, curly, thick, won’t lay down, may stand tall& proud hair…just freaks them out! its like we have to make others feel comfortable abt US by not being so blatantly DIFFERENT.its not my problem to make anyone feel comfortable with ME.my hair is part of who I am.just as their hair is…why do I have to ADJUST?first blks weren’t allowed in the military& when that changed they made SURE to implement… Read more »

Omg I wish I could thumbs this up!! Black Girl Long Hair, why did you disable that feature? Just curious

I remember a post you had on here talking about the band on black hair. We were only allowed to wear scarfs and we were more trouble with the wraps. These attacks just confirm that we are a beautiful people. When I was growing up, the large hooped earrings was band. They were worn by us, only. In some places the french roll and other large updos worn by us was band. Now, we know we are more educated and willing to fight it. It is a just an attempt to see what they can get away with and WE ARE… Read more »

If the whole world had textured/kinky hair this would not be an issue. I really can’t understand the issue with dreadlocks. If dreadlocks are banned at some work places and schools they should add wigs/weaves/extensions/tri-toned colored hair and so fourth. It is very possible that there are more pressing issues in this world than how a child/woman/man wears their hair. If it is not in the way, if it is presentable then please just STOP all this extra nonsense.

I’ve wore almost every possible hair style known to women. I’ve always preferred my own hair on my head vs. someone’s else’s. Going completely natural and locing my hair was the best decision I’ve could of made for me 30yrs ago. I do remember early on, when I started this journey, there were not many women or men were doing so. I didn’t care or concern myself of what “other’s” may think or believe. I wasn’t concerned if I wouldn’t be hired or fired from a job simply because I was being me. My focus.…I knew I was seriously tired… Read more »

Any help would be appreciated. Thanks in advance. I was discharge from my Job working for a franchise own Jimmy John’s because I have Dreadlocks. I was recruited, hired and trained with my hair the way it is.A little over a month into working for them,the owner approach me and my roommate who also was hired at the same time and said that it was brought to their attention that we had deadlocks and that its part of corporate policy that we could not wear that hairstyle and that we had to change it or lose our jobs. Need to… Read more »

We need to stop letting white people tell us what to do with our hair!!

The last one was a Christian school that allows make up but not Afro puffs or small twists! smh bad priorities and prejudice.