A Chat with Orange is the New Black’s Vicky Jeudy

Vicky Jeudy is best known as Janae Watson on the Netflix breakout hit “Orange Is the New Black” (2013). Originally from Queens NY and of Haitian descent Vicky got her start in the entertainment world competing in beauty pageants. 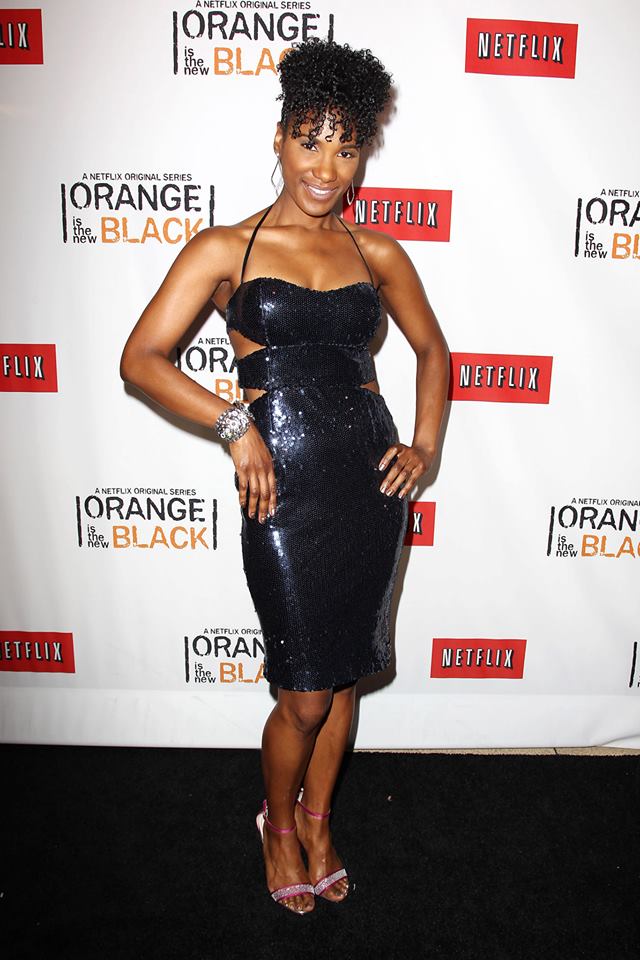 Your show Orange is the New Black is a hit! Let’s talk about your character the track star, Janae Watson! She appears to be one of the most headstrong characters in the bunch. What is something you think the audience may not know about her?
V: I think she is protecting the little girl inside her. She was the outcast and had a deep desire to blend in with the crowd. Everyone can identify with that.

Do you think you share any similarities with your character?
V: I definitely connect with Janae’s view on justice and equality. She’s a fighter. I’m a humanitarian at heart in my everyday life. She’s in prison with the rest of her inmates and they are missing their loved ones. As humans we all have moments when we are separated from a loved one. Either when someone moves away, ends a friendship, death, whatever it is.

What was your favorite moment or scene on the show?
V: I loved when I was working with Pensatucky played by Taryn Manning. I’m such a big fan of Taryn Manning. I loved her work in Hustle and Flow. So when she came on set, it was like ‘This is going to be great!’ She’s so awesome and sweet in real life. 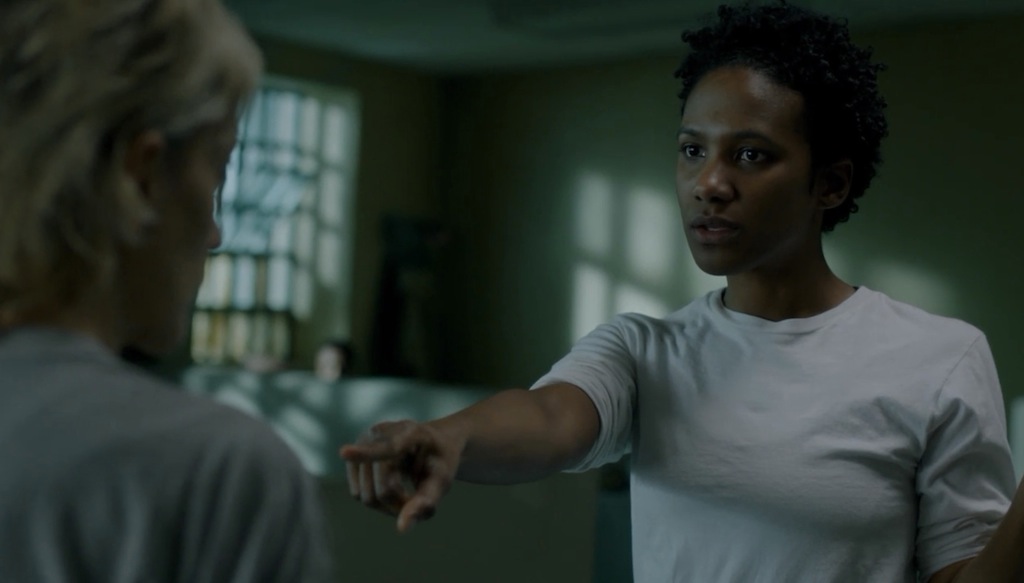 You have a lot of the fun on the show?
V: Oh yeah! Did you see our twerking video the other day? It’s on Instagram. We’re twerking on set in between takes. In the video it’s Crazy Eyes (Uzo), Danielle (Taystee), Adrienne who plays Black Cindy. You have to watch the end of the video!

How did this role come about for you?
V: My manager sent me the audition and I went. She called me a couple days later and said I got the part. “You booked it.”

Did you think the show was going to receive the overwhelming response that it has?
V: I did. I remember when I was on set working with other actors and developing these characters and watching other people’s scene, we couldn’t stop laughing. It’s the whole cast that’s laughing. The magic was already there from the beginning. Even now, while shooting I still can’t stop laughing.

What is the most interesting fan interaction that has happened to you since Orange is the New Black aired?
V: I think the one thing that people say over and over again is, “Wow! You’re so nice in person.” I was in Central Park the other day bike riding and some guy yells, “I’m a fan!” He stops and ask to take a picture and says, “I was expecting you to be like, ‘Yo What Up! Deuces.’ You’re actually nice and kind of girly.” I love the fans and feel really grateful. You guys make the show. 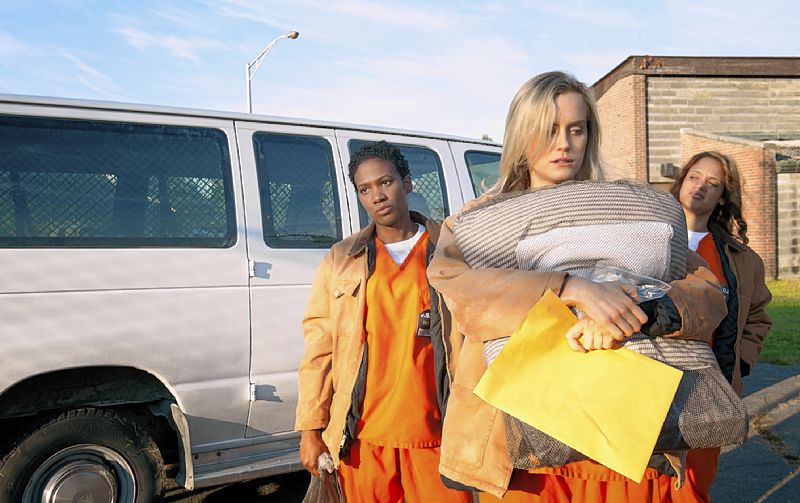 I’ve read that you started out as a beauty queen in New York. How did you make the transition into acting?
V: I started off in beauty pageants when I was younger. I went to college and I studied theatre so I have my B.A. in theatre. Then I attended an acting conservatory in New York City. I feel like my journey is like a long route. From there I went to Atlanta and was shooting indies until I relocated back to New York City and started hitting the acting pavement here. I signed with my manager Sana, at Steinberg Talent and 6 months later booked the show.

What is a typical day like for you when it comes to maintaining your hair?
V: I’m pretty low key. I will co-wash it and add a leave in conditioner.

Have you always been natural? If not when and why did you decide to transition?
V: I think I became natural right after I graduated college. I became natural because I saw my friend doing a play and she had done the big chop. I did my big chop the following week. Pretty much I was copycat.

Do you have a signature style?
V: Not really, I think I’m still discovering what my signature look is. Usually it’s just pulled back, up in a puff or I’ll rock it out. Whatever I feel like doing on that day. 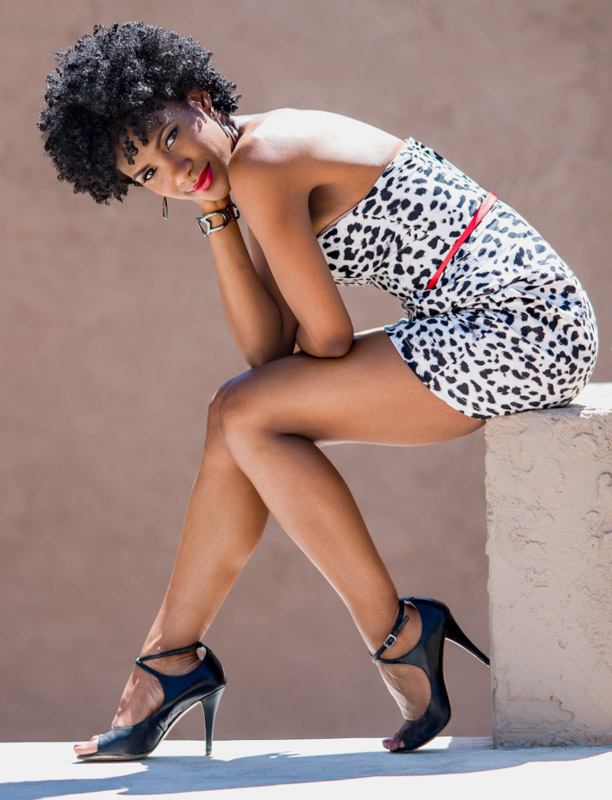 Are there any products that you swear by?
V: I swear by Shea Moisture! Shea Moisture Shea Butter Leave-In Conditioner. Not the Shea Moisture you find in Target or Walmart. You have to order it from Amazon online for around $7-$8. It only has 6 ingredients. The other thing I use is Eco Styler gel.

Is there a hair regimen that you follow?
V: The only thing I do is co-wash daily, then use the leave-in conditioner and a little Eco Styler on the edges. I’m getting into doing deep conditions twice a month.

What is next for you?
V: I’m working on season 2 of Orange is the New Black. Having a blast. I just got done shooting a wonderful indie film, Romeo and Juliet in Harlem. I’m just excited about what’s to come. I’m in the now and enjoying this moment.

I LOVE THE FANS! You guys make the show! We wouldn’t have a second season if it wasn’t for you so thank you for your love and your support! We’ll be back in 2014!

I love OITNB!! Love all the characters and I always wondered about her hair! Lol.

What does she mean about shea moisture? If she saying the one in target is not the real deal? Or that there are two different lines with the same name??

I know EXACTLY what she means about the Shea Moisture. Several years ago, before Shea Moisture was really big and sold everywhere, it was a small company with only a few products in your neighborhood beauty supply store. The products were packaged in white bottles with red and green writing. I don’t know why the older products aren’t sold in Target/Walmart etc because I can still find that leave-in conditioner in my fave beauty supply store.

Congratulations on the new season! I stumbled upon this show a couple weeks ago and watched the whole season in two days (now I’m jonesin’; didn’t know I’d have to wait until next year to get my fix!) You’re all doing an exemplary job!

I have to say, I LOVE the hairstyles and natural hair on the show… had me thinking I might need to grab my big purse, a ski mask, and some running shoes so I could go on “vacation” for a minute, LOL!

You may want to,rethink that “vacation” Lol I just came back from “vacation” a few weeks ago, even though I spent only a small amount of time in the tink, it sucks big time. lol But I see what your saying and yup this a great show accurately depicted!
It isn’t too far from the truth. 🙂

Trust, I was being completely facetious, I am NOT trying to get locked up; ain’t nobody got time for that!

I’m glad you were able to get out of there, luv.

OMG, I LOVE THIS SHOW! and she is so beautiful!! and yes, i was admiring her hair when i started watching the show.
I’m looking forward to you guys doing an interview with “taystee” and “poussey”, they are both natural as well. I can’t wait for the new season!! does anyone know when it premiers?

I have never heard of this show but the reviews are good. I’ll definitely check it out. The pic of her in the blk & white dress is gorgeous. She’s beautiful.

Her skin is immaculate. I love me some black skin.

I love OTNB I was hesitant to watch it at first seeing as I personally had to also turn myself in for a first time minor offense a while back . The female prison gp is not too different from what they portray on the show. I sure am glad I clicked on netflix to watch such an awesome show! Totally blew me away!
I am obsessed with the next season now! I love everyone on the show because most of you guys are my favorite actors ESPECIALLY CRAZY EYES!!!! LOL WE LOOOOOVE CRAZY EYES!!

I read Piper Kerman’s book Orange is the New Black: My Year in a Women’s Prison and I was blown away! I was so glad to see that it had been made into a tv show that I ordered nexflix specifically to watch it.

Orange will make you laugh and cry. I’m glad Orange tells the stories of these complex ladies. We have all lived through some sh!+. Thank goodness for the story tellers who create positive change not only for themselves but to the lives of others who are voiceless.

Just finished the 1st Season and I cannot wait for the 2nd. The show is great!

Vicky your hair is gorgeous TWA and with length. You’re a wonderful actress. Keep up the good work. REPRESENT!!

I think this is the Shea moisture product she was referring, hope the link works…

I love this product. I started using it about 3 years ago but then had problems locating it, not even my cousins in the US were able to find it for me. I am now happy to say it has been rediscovered here in London where I live and loving it again. A little goes a long way because it’s so thick. As for this show I’m sure I’ve seen it advertised on British tv, I will definitely look out for when it’s showing and make time to watch it.

My husband and I were addicted to Orange is the New Black! I kept looking at her hair on the show like yeah buddy…! Can’t wait for the next season.

Oh wow! I was scrolling past this article and saw the name Vicky Jeudy” and was like ohmygosh! I remember that name, haha. I used to attend First Baptist of Atlanta and at one point you were my Sunday school teacher 🙂 I specifically remember you explaining to me that Jeudy was French for Thursday and I thought that was so cool, haha. Anyway I remember when you left to pursue acting and I’m so very happy that it is working out for you and I pray that your future is blessed and prosperous. Oh, and natural definitely looks gorgeous on… Read more »

[…] is a few excerpt from BlackGirlLongHair with Vicky about her […]

[…] gracing the pages of this month’s Essence magazine. Also, you should really check out our interview with the fabulous Vicky Jeudy who plays the role of […]

She is beautiful I love her on the show and she is slaying on the cover of Essence.