Amara La Negra has emerged as the breakout star of the new season of Love and Hip Hop Miami. The Dominican singer is stunning, talented and unapologetically Afro-Latina. And she is already getting pushback for it. On a recent episode of LHHMIA she met with producer Young Hollywood who told her she had to be “more Beyonce and less Macy Gray” if she wanted to make it in the industry, and also called her “Nutella Queen”. And when she discussed colorism in the Afro-Latina community on a January 22 episode of the Breakfast Club, host Charlamagne asked if it was all ‘in her head’.

Wow, the whole time while Amara La Negra was trying to explain how difficult it is being a darkskinned black Latina in the music industry, Charlamagne and Envy tried to invalidate her struggles. pic.twitter.com/FmqTQRay6o

Amara has remained eloquent throughout this and ignited public debate about colorism in the Latix community, a conversation many believe is long overdue. We have the feeling we’ll be sseeing more of this beauty in the years to come. Here are 8 things to know about her.

1. She was born in Miami on October 4, 1990 to a Dominican mother. Her birth name is Dana Danelys De Los Santos, and although she was raised in Miami she has close ties to the Dominican Republic.

2. Her stage name, “Amara La Negra” which loosely translates to Amara the Black woman, is a tribute to her Afro-Latina heritage. In interviews she has credited reading Malcolm X in high school with her decision to embrace her African heritage.

3. She has been preparing for a career in entertainment since childhood;

“I grew up with a single mother… My mom sacrificed a lot to give me a decent lifestyle. She worked up five jobs in order to maintain the household and still keep me in the music. I was in a dance academy; I used to dance Monday through Friday. I had acting classes and I had singing classes. I also had modeling classes. I was doing it all. My childhood pretty much revolved around my future. I don’t even know how to ride a bike or how to swim or even roller skate.”

She often posts snippets of her childhood performances on Instagram, and they are all adorable.

4. She is #teamnatural and that fro is real! In a 2015 Vibe magazine interview she explains her decision to go natural;

“One of the reasons I’m so rebellious and I wear my hair from my head attached to my body, is because for many years I was told this bulls–t lie that in order to be beautiful, I had to have straight hair, because my hair was too ‘unmanageable’… Hello! I’m black. Yes, I’m going to have nappy and kinky hair. But that’s part of what makes me beautiful. And it took me years to know and realize that. I’m straightening and burning my hair for what? To please who?”

Back in 2015 she posted video to Instagram of her mom taking down her cornrows, revealing her signature curly fro.

5. She may look like a Barbie doll but she isn’t a white woman in blackface as she is often accused of. She does not wear contacts and her natural eye color is grey.

Here she is as a child with legendary Cuban singer Celia Cruz. 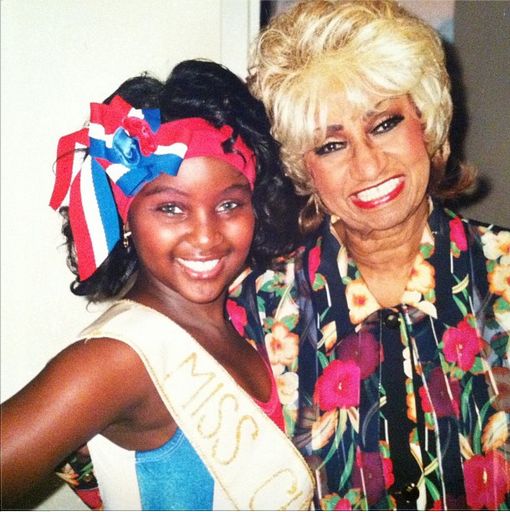 And as a teen with her mother. 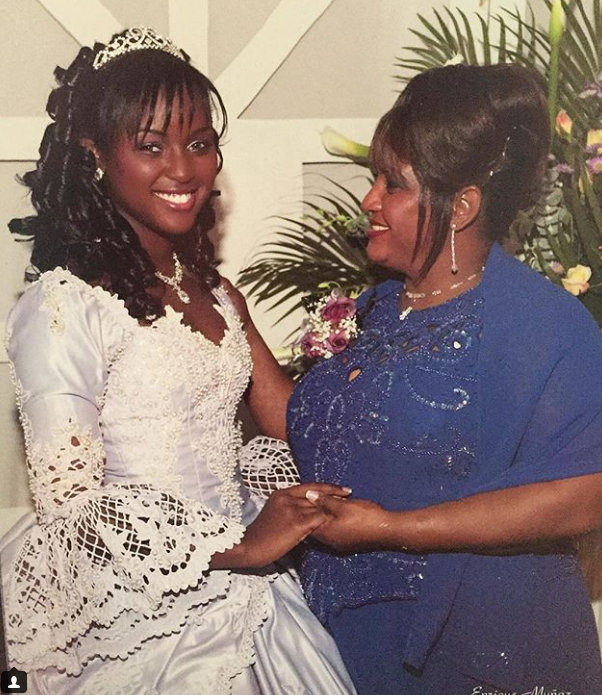 6. She kills it on the Gram regularly. 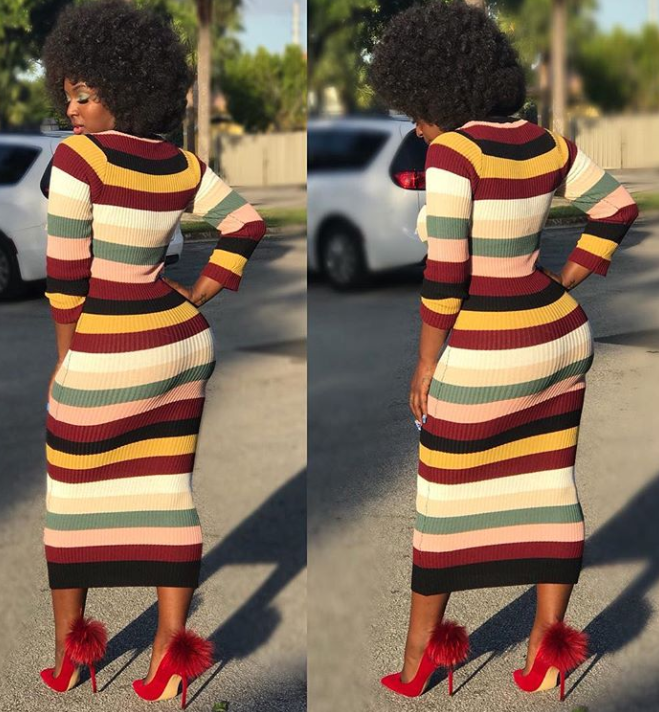 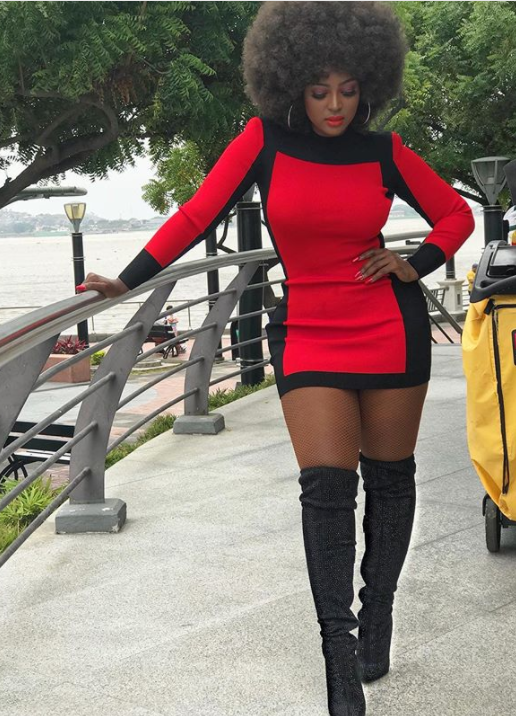 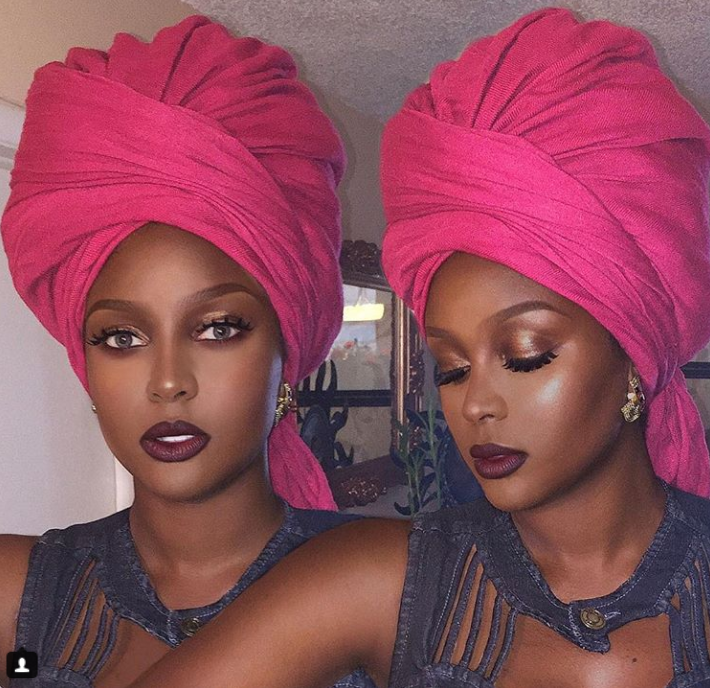 7. Unfortunately the incident with Young Hollywood is not the first time she’s been publicly disparaged for her features. Back in 2016 Dominican TV host and beauty pageant winner Geisha Montes de Oca donned blackface and butt pads to imitate Amara on a variety show.

8. She is super talented! Check out the video for one of her most popular singles, Se Que Soy.

9. She just signed a record deal! In early January Billboard magazine announced that Amara had signed a multi-album record deal with Fast Life Entertainment Worldwide and BMG. Here’s hoping that she blows up like one of our other faves, LHHNY alum Cardi B!

Amara Le Negra is the sphinx rising. The time is now! For too long, the natural beauty of authentic african characteristics, has been esthetically-modified. The beauty of it all is inherent not changing our nappy, curvy, dark, colorful God-given beauty. Blackness is the new beauty dimension unexploited. Its no secret that everyone is buying it artificially,… lips, hips, tans, hair, music, style…BRING IT ON MS. AMARA!!! It’s time!! Many will follow.

still very flabbergasted at all the hate she got over the last few weeks stemmed from simple ignorance…the social media age smh: hate first, understand later