The Clapback Chronicles: From Being Called a “Bruised Banana” To Getting a Ford Modeling Contract

Sometimes a clapback is less about what is said and more about what is done. Take 18-year-old Salem Mitchell. After posing for a photographer friend her pictures went viral, but not for what she’d hoped — people were clowning her freckles calling her everything from cheetah to bruised banana.

“I got popular on social media mostly by people making fun of me… I have a lot of freckles, which I don’t see as a problem, but apparently a lot of people haven’t seen them before. People would say I looked like a banana or a cheetah or like I had a skin disease.”

Mitchell turned the insults on their head. Releasing photos where she posed with ripe bananas. In an interview with the San Diego Voice she explained why. 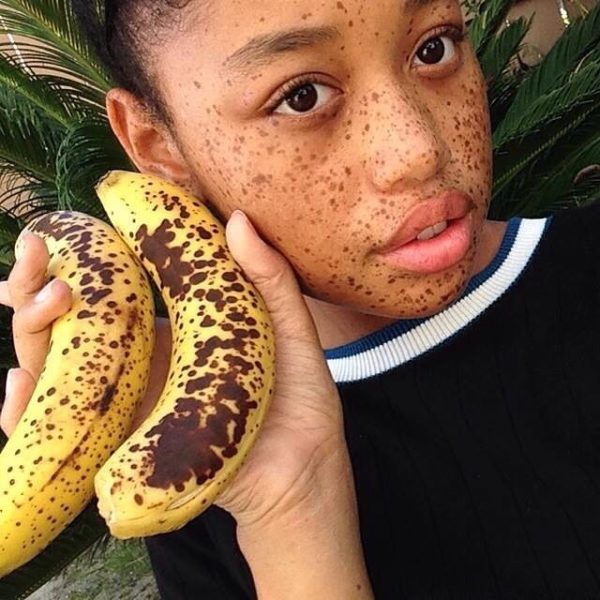 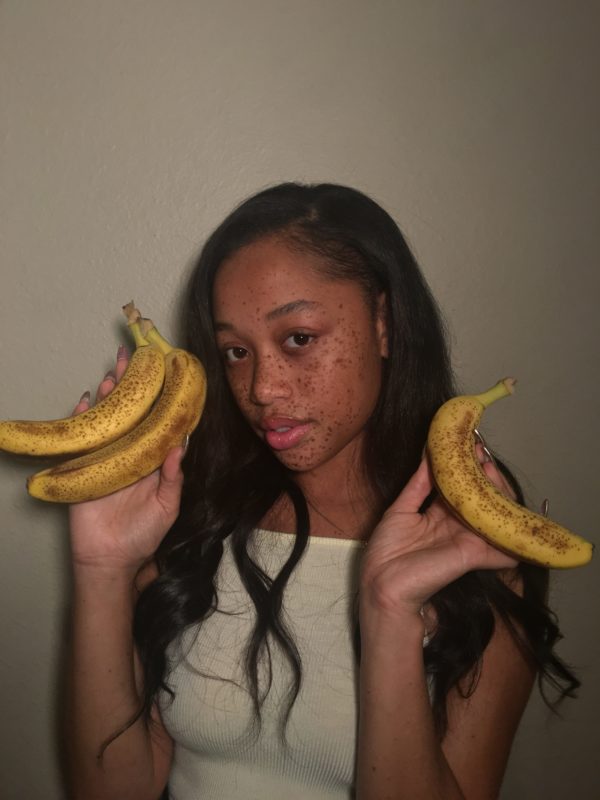 Mitchell’s banana photos started going viral and photographers began contacting her. The prestige of the gigs escalated, and before long she was posing for Wonderland Magazine, Vogue and Beyonce (modeling clothes released with the superstar’s Lemonade album.) 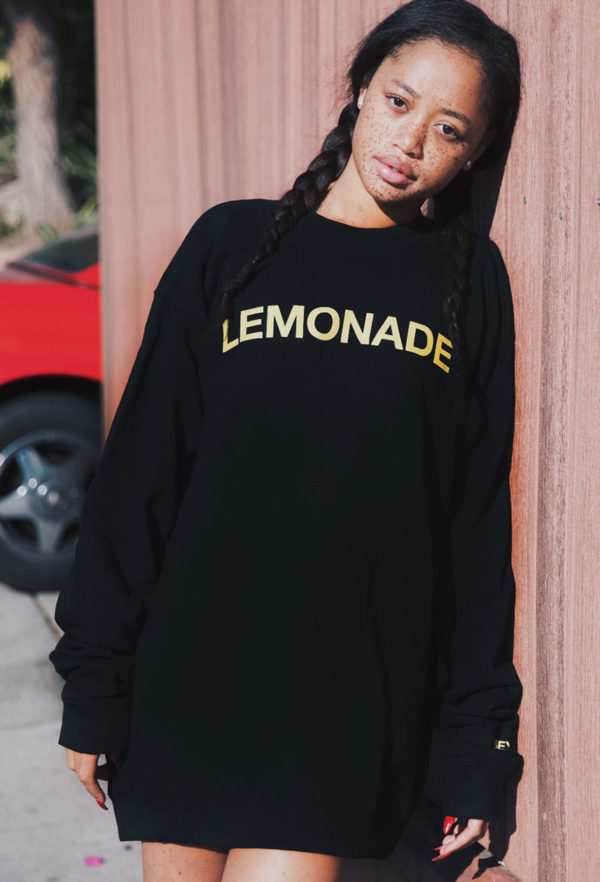 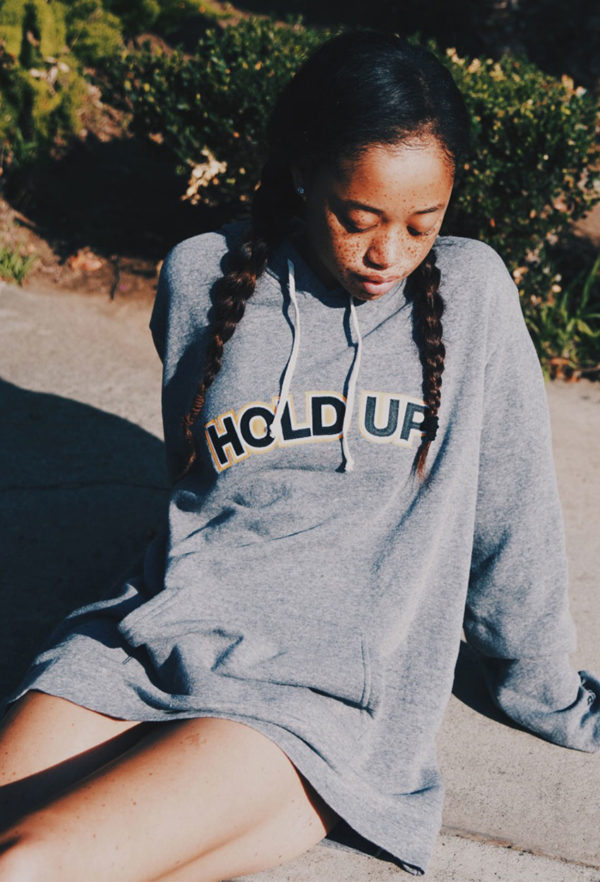 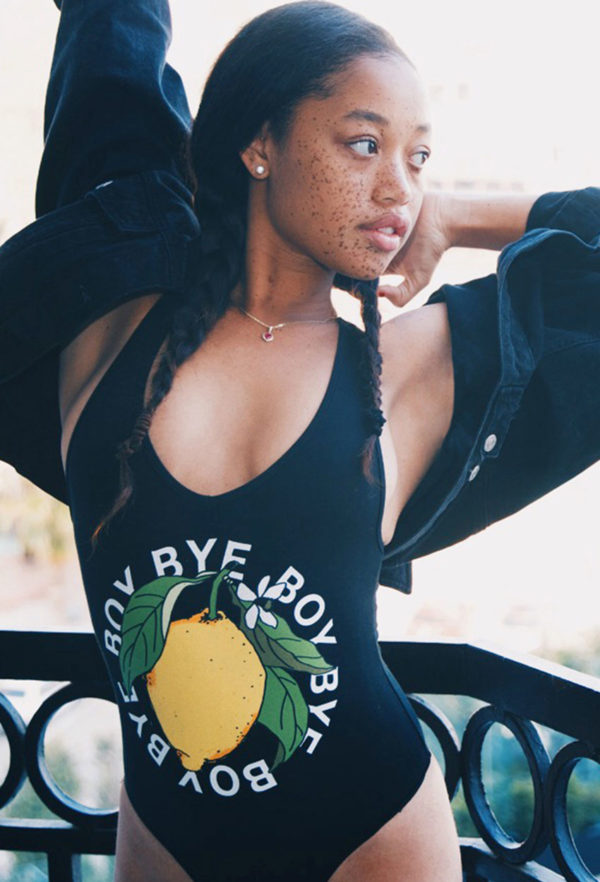 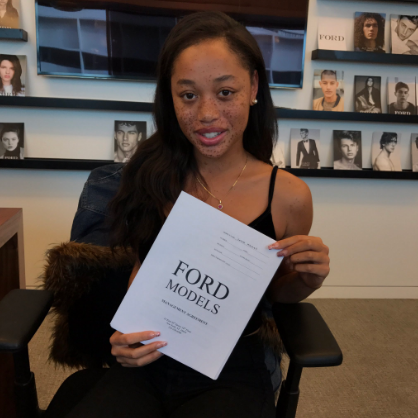 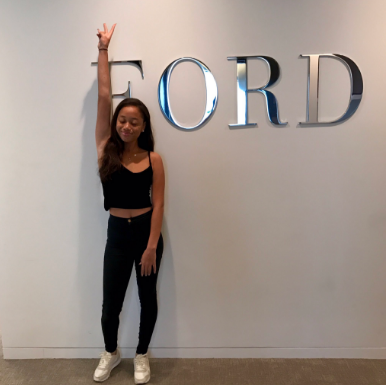 She took to Twitter to thank her supporters — and her haters.

“people making fun of my banana freckles turned into a modeling career, thanks if you’ve ever said anything good or bad it worked in my favor” 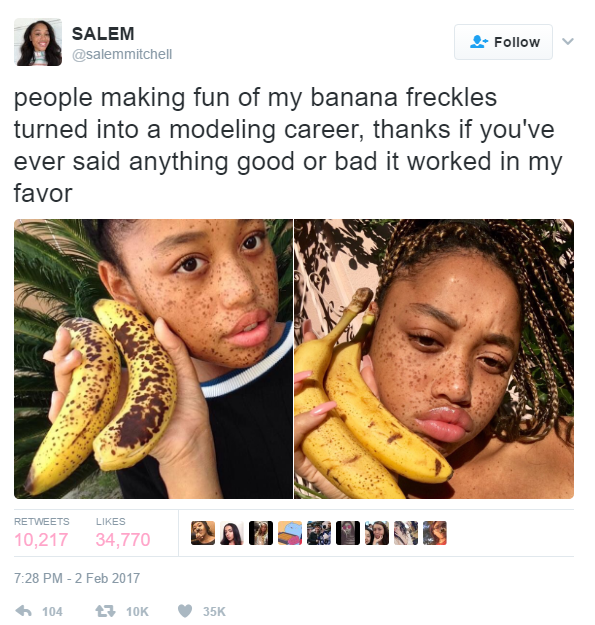 Ladies, what do you think of Salem’s story?

TBH I don’t like freckles and the makeup faux freckles trend made them worse but she looks so cute and pretty. I’m def jealous, always wanted to model but my parents won’t let me or anyone in our fam although people tell us we should be models. Congrats!

Thanks to some of the miserable people behind a screen, she’s having the last laugh. Good for her and best of luck with her modelling!

Yo the clapback is real, bruh she laughing all the way to the bank with this one. This is the true meaning of my haters are my movivaters.

She is such a beautiful young lady. To think the hateful haters helped her in starting a modeling career. Congratulations.

She makes freckles look so hot. Very beautiful girl. The thing in life is that when you become confident in your own skin and appreciate all your features, no one can put you down. No one can make you feel inferior without your position. It’s awesome how she’s making money off people talking about her (both positively and negatively) and how she posed with a banana to troll them. Haha, love it!

Good for her she is quite lovely and her freckles are what make her lovely.

Great article! She is just beautiful! I love my freckles and I think differences can make our world only richer, we should just celebrate them! xoxo, Fa
FATIMAYARIE.COM

The thing in life is that when you become confident in your own skin and appreciate all your features, no one can put you down. No one can make you feel inferior without your position.

She is so beautiful. I call them sun kisses. I say congrats to her. People today are so judgmental and mean as hell.

It’s not just the complexion, she obviously takes good care of her body, has a good diet and works out, something sorely lacking in the black female community.

“…takes good care of her body, has a good diet and works out, something sorely lacking in the black female community.” What are you talking about? Comments like this really grind my gears. I’m in my mid-late 20’s and most of the black women I know are critical of their apearence and take the steps to keep their body tight and right. Just go on youtube, Instagram, tumblr (type in black fitness) and you will find an entire community of people dedicated to fitness and a healthy lifestyle. Making comments like that diminishes efforts. Just cause the ones you’ve come… Read more »