Let me first say, as an avid fan of ColourPop, if this is true (and it seems like it is), I am extremely disappointed. I let it go when folks got upset that they named their dark brown sculpting stix ‘Yikes’ and ‘Typo’ — because everything comes from a random name generator these days. And I’ve tried my best not to judge them on their melanin-deficient collaboration selections. But it recently came to light that ColourPop photoshopped an arm to appear darker for the sake of a swatch. Cocoaswatches, a popular Instagram page and mobile app that features makeup swatches on brown-skinned women, shared a photo from a follower who thought that a ColourPop swatch for their peach shades looked a bit…off. Exhibit A: 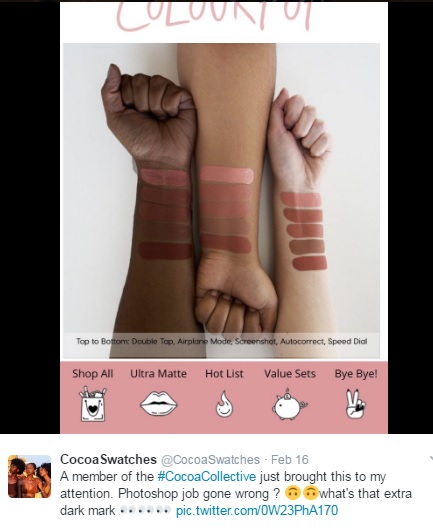 I have questions. In addition to the weird dark mark that clearly isn’t a shadow, why is the palm so dark? If I recall correctly, brown-skinned people don’t have brown palms? Is that even a real swatch? These swatches are from some of their peach shades, and when I swatch peachy shades I ALWAYS tell people that the color will most likely be lighter on brown skin. This doesn’t look right at all.

After backlash mounted ColourPop deleted the swatch photo in question without addressing the concern. This is so lame to me because it would have probably taken them five minutes to find a black model to do the swatch. They’re based in LA, not Russia. So what’s good?

Furthermore, I swatch and promote black-owned indie brands (@dupeblack), and a criticism I often see is that these brands don’t have enough diverse swatches, when a lot of the time, small indies don’t have the money to hire 3–4 different swatch models. And who is often brought up as the standard? ColourPop, still considered an indie even though they have 4M followers on IG and you can hop on YouTube and find thousands of ColourPop reviews. Comparing them to an indie with 5K followers is ludicrous, but that’s a post for another day. To be honest, I can’t believe how legitimately annoyed I am. Perhaps if their employees spent less time on Snapchat goofing off and showing lip and arm swatches on the same women again and again, they would have had more time to find a brown-skinned model.

I hope they come out with a statement addressing this fiasco, because I need some answers.

That’s the issue! There are very few that meets needs for women of color. And that don’t charge an arm and a leg for products!

I feel a drag coming. When ya’ll ready! Also if you look at the left hand side of the background near the women’s arm, it’s a been darkened accidently when they were darkening the woman. LMFAO, what a bunch of lames.

This isnt true. I know the person that arm is attached to. She is a real person. That mark is either poor lighting or bad removal of a previous swatch. We have actually been introduced to POC on Colourpops snapchat so we know that they do hire them. I can’t speak to the deletion of the photo but I can say its not a photoshop job.

Isn’t it sad when black women are reduced to acronyms

I’m actually so disappointed in Colourpop, considering half of my makeup collection is from there. Whether if this is true or not, I hope they’ll be taking notes for the next time they decide to plan a shoot.

What’s weird is that I’ve browsed the majority of their collections and makeup but I’ve never seen anything like this… Majority of the time the swatch looks as it should and the model is clearly black. 😕