A recently unveiled photo shows Harriet Tubman circa 1865 — 1868. The petite Tubman (who stood at 5 feet) is seated, wearing a fitted blouse and full skirt, with her hair parted down the middle and pulled back. According to historians she is between 43 and 46 years old. 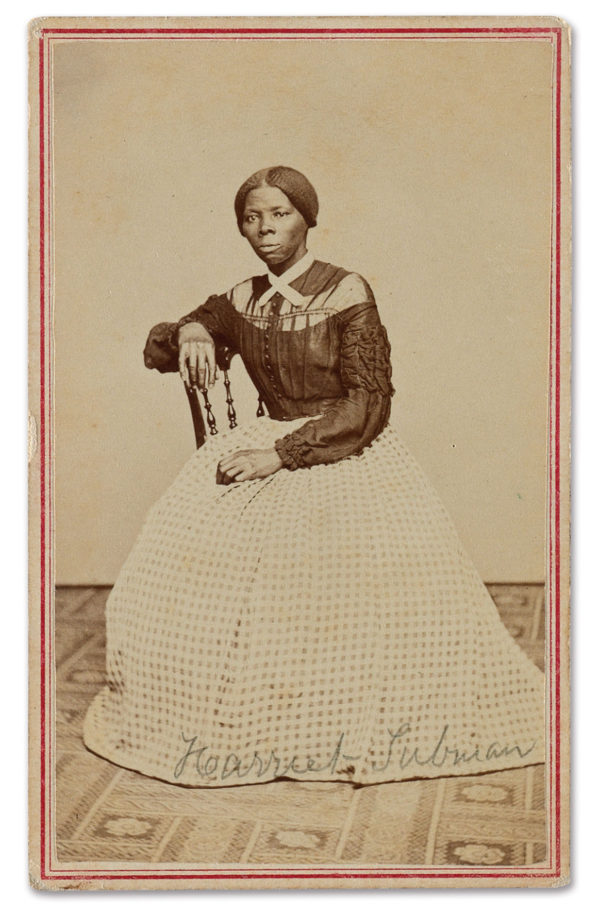 So, a few thoughts about this picture…

1. Black has not been cracking for a long time now…
Because when I first saw the photo I was like, “Oh great! They found a picture of Harriet Tubman in her twenties!” until I read the accompanying info.

2. This is how she looked after years of spiriting slaves off of plantations in dangerous, wintry conditions.
One of Tubman’s last missions was to get her mother in 1855. Which means that this photo was taken years after her slave freeing days were over. Ol girl is chilling like, “Oh yeh, I saved dozens of black folks from cruel enslavement. Naw, they ain’t catch me once. I’ll tell you about it some time.”

3. The hair, obviously.
Looking all thick and healthy, pulled back in a protective style. YAS Miss Tubman!

Harriet Tubman’s abilities as a tactical strategist weren’t just used to free slaves. She was also the first woman — black or non-black — to lead an armed assault during the Civil War, successfully attacking and setting fire to a series of plantations in 1863 and freeing hundreds of slaves. This also happened before this photo was taken…

“When President Lincoln finally issued the Emancipation Proclamation in January 1863, Tubman considered it an important step toward the goal of liberating all black men, women, and children from slavery. She renewed her support for a defeat of the Confederacy, and before long she was leading a band of scouts through the land around Port Royal. The marshes and rivers in South Carolina were similar to those of the Eastern Shore of Maryland; thus her knowledge of covert travel and subterfuge among potential enemies were put to good use. Her group, working under the orders of Secretary of War Edwin M. Stanton, mapped the unfamiliar terrain and reconnoitered its inhabitants. She later worked alongside Colonel James Montgomery, and provided him with key intelligence that aided the capture of Jacksonville, Florida.

Later that year, Tubman became the first woman to lead an armed assault during the Civil War. When Montgomery and his troops conducted an assault on a collection of plantations along the Combahee River, Tubman served as a key adviser and accompanied the raid. On the morning of June 2, 1863, Tubman guided three steamboats around Confederate mines in the waters leading to the shore. Once ashore, the Union troops set fire to the plantations, destroying infrastructure and seizing thousands of dollars worth of food and supplies. When the steamboats sounded their whistles, slaves throughout the area understood that it was being liberated. Tubman watched as slaves stampeded toward the boats. “I never saw such a sight,” she said later, describing a scene of chaos with women carrying still-steaming pots of rice, pigs squealing in bags slung over shoulders, and babies hanging around their parents’ necks. Although their owners, armed with handguns and whips, tried to stop the mass escape, their efforts were nearly useless in the tumult. As Confederate troops raced to the scene, steamboats packed full of slaves took off toward Beaufort.”

Get into this hilarious and informative Drunk History episode starring Crissle (of The Read) and Octavia Spencer.

Ladies, what do you think of the newly discovered photo of Harriet Tubman?

Awesome! I hope we find more!

Fantastic post! And I Love this pic of HT. Her strength shine through.

I’m always stunned by the amazing strength of our women! Harriett, so petite and brave! How I would have loved to be able to see her in person. I’m happy someone took this picture of her and that you shared it with us. Thank you:)

That was one kick-ass woman! I hope a movie is made of her life during the time she worked with Montgomery. Would love to see the freed brothers and sisters running towards the boat.