The End of Her ‘No Makeup’ Movement? Alicia Keys Admits That She Wears Makeup 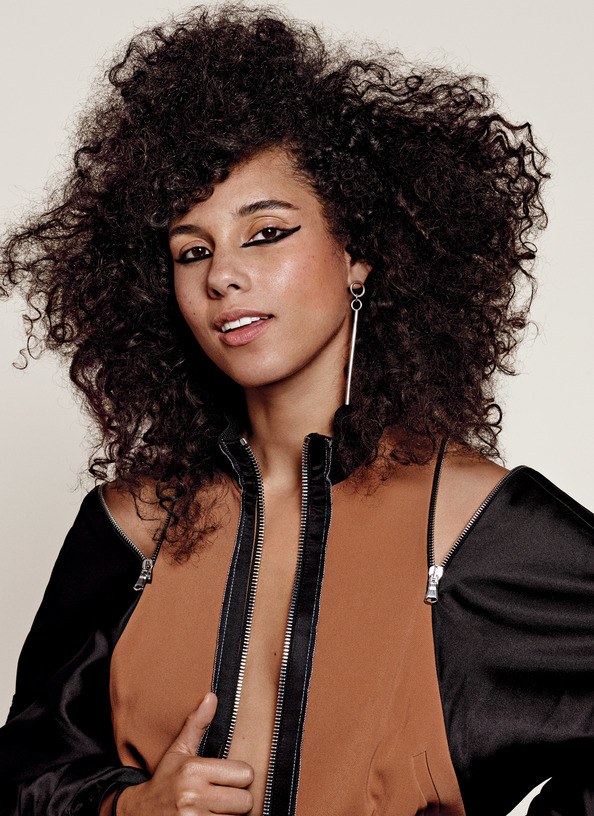 Back in May, the singer made a strong anti-makeup statement in Lena Dunham’s Lenny Letter that came across to many as makeup-shaming.

“Does it start somewhere in second grade after picture day when you wear your frizzy hair out ’cause your mama says it’s beautiful but all your “friends” laugh at you?

You grab the brush and gel and pull your beautiful big hair back into the tightest ponytail you possibly can to contain your unique hair in a bun — hiding a piece of who you are in order to fit into a picture of what others seem to see as perfection.

Or how about in junior high school? Where all the “pretty” girls are wearing lipstick and eyeliner and mascara. Some of them are so skilled they even look like those models in every magazine you ever read — the ones who made you feel slightly uncomfortable with yourself or misrepresented or just unseen.

It’s another moment where some piece of you realizes that to fit in or be thought of as beautiful, you have to cover up to be a bit closer to perfect.”

She goes on to state that she will be ditching makeup because it is hiding her true self and ends with,

“I hope to God it’s a revolution.”

Except she didn’t ditch makeup. In a candid October interview Key’s makeup artist Dotti revealed that the singer had minimized but not discarded her makeup routine which still included brow fillers, brow definers and finishing powder.

And now, in a new Allure interview, Keys herself is sorta backtracking on her bold “revolution” statement;

I think makeup can be self-expression. I have no intention to shame anyone at all [who chooses to wear it]. No one should be ashamed by the way you choose to express yourself. And that’s exactly the point. However, if you want to do that for yourself, you should do that.

I am all about a woman’s right to choose. I think a woman should do anything she wants as it relates to her face, her body, her health. Whatever mode of expression that empowers you, that’s what you should do. What I am not down for is this ridiculously high, unrealistic expectation about appearance that we as women are held to…

I started at 20 years old in this ridiculously invasive world [the music business] in which everyone covered me in makeup and then threw me under tons of lights, so I’d sweat for two or three hours.

It took me so long to finally say, ‘Whoa! Who am I under there?’” she explained. “That is just my own personal quest.”

Alicia Keys is to be commended for walking many a red carpet with minimal makeup. And while her no makeup “movement” did annoy me initially, over time it pushed me to question why a bare face is considered unattractive and even inappropriate in glam settings. Not to mention the gendered expectation that women wear makeup in many professional and formal contexts, while men are exempt. Still, I wish Keys had just been honest from day one, and not thrown makeup-loving women under the bus with implications of vanity and inauthenticity.

Hnmm.….alicia wasnt fooling me with dat no make up b.s.…challll pleasssseee.I dont know …everytime i see her i see i her as a woman who stole someones husband.i just never expected to see her in that light but i still like her music tho

A
Reply to  ticha st.fleur

getting your facts in correctly Swizz beats has a child who was born on may 2008 by another women, his first wife and him separated a month before April 2008 over this .This means Swizz had an affair and conceived a child in 2007 way before Alicia came in the picture. Alicia and Swizz announced their relationship in May 2009 , rumors about them dating started in 2008 after the separation. I personally think Swizz and Mashonda were over by the time Alicia started dating him , by the time people announce a separation the marriage is usually pretty much… Read more »

It’s her decision but just say I’m minimizing my make vice no make up.…it’s her choice but why pretend or fake us out…but I wasn’t fooled, I knew she was and it’s her choice.

‘cos in celeb-land EVERYTHING is designed to mislead their easily duped, adoring consumer-spending public.

I always thought that whole thing was for publicity. Not surprised it didn’t last long. Maybe it is sexist that woman have to wear make up. Who knows… I don’t care I’m still wearing make up on special occasions lol

Internet always amazes me… How did someone like you ended up here? You don’t even do black hair!

Lol. Ikr! Seems someone is snooping around doing at-home ‘research’.

She thought women would follow that dude s&*t, it was all to get attention and I didn’t buy that bull anyway, it was as plain as there are oceans that it was for publicity, women these days embrace and love themselves and to try to shame other into your dumb bull makes you rather worthless and hopeless, do a movement if you want, your choice but don’t try pulling other people into your lane. I encourage every female, do you don’t try being someone else, that includes your hair, makeup and whatever you choose to wear. Be proud of who… Read more »

She never threw makeup wearing women under a bus. From the start, she said her only problem was that society expected women to HAVE to wear makeup, and never said everyone should stop wearing makeup altogether. In her words last year, “I think the most important thing is you do what feels good for you.”

Why does everyone feel the need to make everything a controversy/witch-hunt. I think she is genuinely trying to be a good role model.

I think she looks good with or without make-up.

Agreed. And the fact that she filled in her brows and threw on some face powder is no big deal. That’s a HUGE difference from image with makeupe…foundation, concealer, highlighter, blush, eyesshadow, lashes.…I mean c’mon. She still SIGNIFICANTLY toned it way down. Filling in eyebrows and putting on a powder does not convey to being made up. Cut her some slack. She did the damn thing. None of these other artists would dare to step out the house with just filled-in eyebrows and a powder (which doesn’t provide coverage at all>

thank you! everyone is mad salty for no reason…

Perhaps because what she DIDN’T say was that she was in fact wearing makeup and had just ‘minimised’ the amount, not gone commando face! That may just be what irks some people. Who’d a thunk it?!

I agree with you. Unnecessary controvery. Everyone interpreted her statements as something negative towards women who choose to wear makeup. She always spoke about her personal feelings about it. She gets to change her mind like everyone else. I get like that sometimes too. At times I feel like I have to put on some eyeliner, lipstick, do my hair and so forth and I’m like F it at times. Unnecessary pressure for no reason. Not sure what the big deal is about her personal feelings on this topic.

She has recently admitted that her tomboy image was a facade to sell records when she first came out and it worked. Now she’s pushing this no-makeup things as if she’s the first woman in the world to go bare-faced and wrote that terrible free verse poem or whatever it was, implying that every woman who wears makeup does it because she’s trying to hide her “true self”. Alicia, girl, miss me with the fake “I am woman hear me roar” ish and just admit this is just another ploy to get us to buy your sub-par music. But we’re… Read more »

Alicia Keys never attacked women who wear makeup. I know because I’m a woman anywhere is backed up and I read her earlier discussion of it very carefully even though I did not write about it. If you’re to write something publicly you owe it to your readers not to distort or misrepresent the information that you’re sharing with them. It’s unfair to her and to us. Be more responsible in the future.

I think y’all are projecting your make up insecurities onto AK. Leave her alone. You have trump as prez and you are gleefully tearing down this woman who was trying to do something positive. You have a man trying to take your rights away and yet you are putting this as a main story,this is not empowering or positivr, its snsrky, it’s mean. Get

That no makeup thing was publicity for her album. Plus its easy to stop wearing makeup when you’re already conventionally attractive. she just doesn’t seem genuine to me.

Pathetic. A couple points: 1) She isn’t throwing make up wearers under the bus. She is explaining that being forced to conform to a standard idea of beauty is bullshit and people should be able to choose what’s they do, and be who they are. 1a) she should have backed up her ‘make up free’ statement with ‘completely make up free’ actions but hey, that’s just imho. If she was able to ditch foundation, eyeliner, gloss, mascara, eyeliner, lashes — that is great for her! 1b) the double standard between men and women exists because many women wear make up to accentuate… Read more »

No shade, just speaking truth. One, it’s a little easier for a woman with Eurocentric features like long or big loosely-curled hair, light skin and keen aquiline features who has been lauded as a standard of beauty to ditch make-up in public than it is for a more ethnic-looking darker skinned black woman with tightly coiled hair. I state that as a light-skinned woman myself. So I wasn’t all that impressed with her “movement.” Two, she shouldn’t make big sweeping declarative statements to the press about I’m not wearing make-up, etc. because we all base decisions or change minds as… Read more »

I don’t get it, I like some of Alicia’s music, not all of it. I don’t wear make up daily, not even lipstick, but I will when I want to. I don’t care what Alicia says about make up, no one sets my standards I set my own standards. I don’t need Alicia or anyone else to be a role model, trail blazer, or trendsetter for me. I do what I like according to my conscience. I found that out when I realized how stupid I was at 16 when ever new record came out, I lived by it, practiced,… Read more »