The water in Flint, Michigan is still poisoned with toxic levels of lead, and has been since April 2014 following the local government’s decision to change the water supply. It took the country years to care or even notice, and criminal charges against the involved officials were only filed in 2016 (none of the cases have yet gone to court.) The government of Michigan has claimed ‘official immunity’ to deter lawsuits, despite its gross negligence. In early December 2016 Congress approved a $170 million spending bill to repair and upgrade Flint’s water system and help with healthcare costs. But many public health experts estimate the true cost of fixing the system and its resulting fallout will be much, much higher.

Up to 12,000 children have had consistent exposure to Flint’s water and the detrimental effects — including slowed growth, lower IQ and learning problems — will last a lifetime. 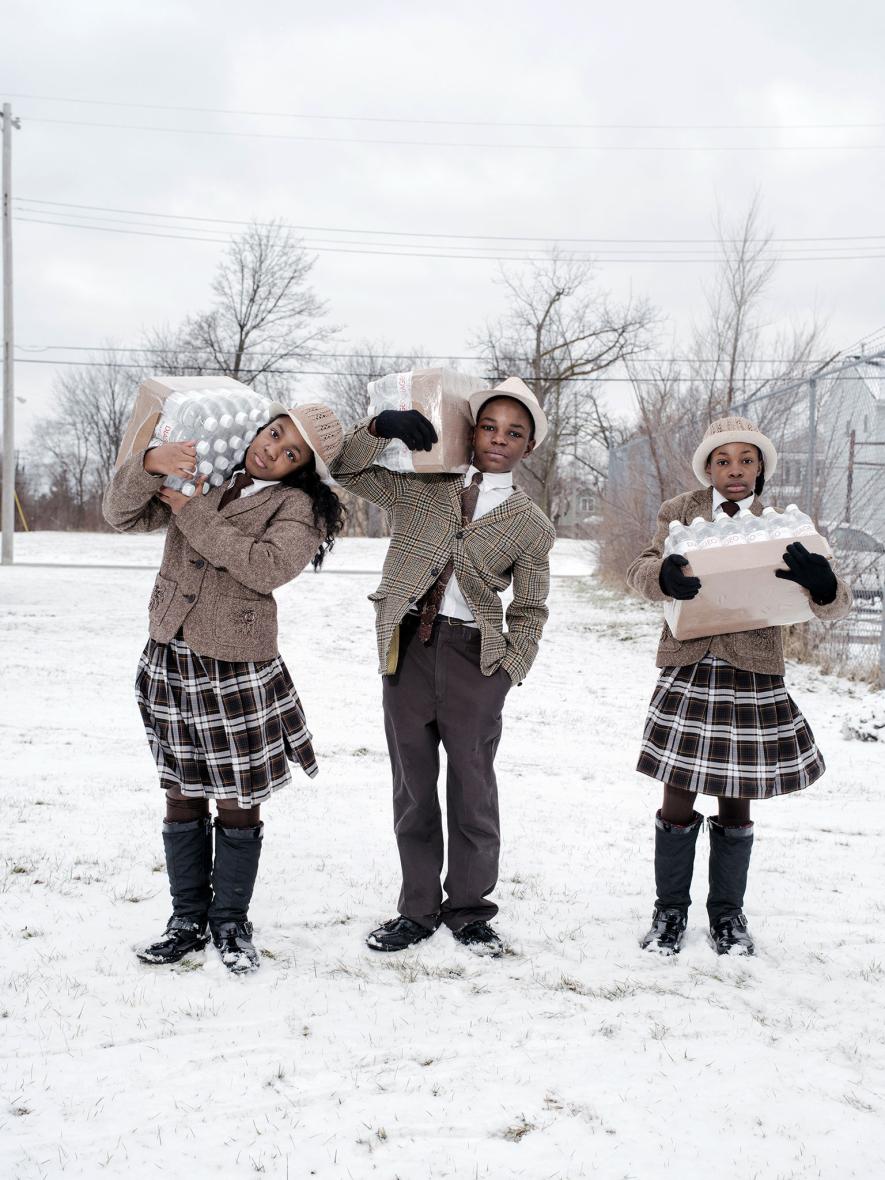 Siblings Julie, Antonio, and India Abram collect their daily allowance of bottled water from Fire Station #3. Located on Martin Luther King Avenue, it is one of five firehouses that have become water resource sites in Flint, Michigan.
PHOTOGRAPH BY WAYNE LAWRENCE, NATIONAL GEOGRAPHIC

And yet, Lifetime has opted to cash in on the tragedy with a film starring… Cher. Variety reports that the network’s plan has been in the works at least since last Spring.

“In addition to starring, Cher will also serve as executive producer with Craig Zadan, Neil Meron, and Katie Couric, who are all producing. Bruce Beresford will direct, and Barbara Stepansky is writing. The telepic — which was first announced last spring — has not been officially greenlit yet, but is expected to begin production this spring, according to Deadline, which first broke news of Cher’s casting. Sony Television is the studio.

Unlike other Lifetime TV movies, the project is expected to be a hard-hitting fact-based drama. It will explore the events that led to the toxic crime and will shed light on politics of the poor management and the human element of residents who suffered and were ignored. Cher will play a local Flint resident whose family is impacted by the water crisis.”

For the record, Flint’s racial makeup is 57% African American and 37% white.

Many Black Americans on Twitter were incredulous as we are, questioning why Lifetime would seek to cash in on a tragedy that is still ongoing, and cast a white woman in the lead to depict a crisis that has disproportionately affected black lives.

so y’all gonna waste money to film this movie.….when Flint still doesn’t have water.….instead of using the money to dona- pic.twitter.com/REUUeKUlVh

there’s so much wrong with this, but i’ll let y’all read and see for yourselves. here’s the correct link btw. https://t.co/5LIIb62ZlC https://t.co/B0hK3jucFm

There’s a Lifetime movie about #flint starring @cher , but they still don’t have clean water… #FlintWaterCrisis
.
.
.
.

instead of making a damn movie about it, how about taking the production $$ and FIXING IT

so you’re making a movie while the people of Flint STILL don’t have water.

*crisis happens*
White People: Instead of actually helping, we should make a movie. pic.twitter.com/e6Agd3VOz5

WTF @cher how are you going to make a movie when Flint STILL doesn’t have clean water!! #FlintWaterCrisis

Even non-blacks chimed in to express confusion.

got to love the US. No actual clean water for the residents of flint, but a movie is out.…

US in a nutshell. Great at movies, not so great at welfare of the people.

don’t you need an ending to the crisis for a complete movie? There’s the motivation to fix it!

Wow! Greed at its finest. When humans become the most important resource on this planet, this kind of garbage will never cease.

.…OMG! …one person nailed it by stating vice a movie, take the money and fix…ACTUALLY fix the problem for good! Greed, politics, capitalism, we CERTAINLY do not matter, and the old IDGAF attitude just make it out of a movie. I do hope the movie sheds more light on the situation and MORE ACTION TO CORRECT THE WATER SITUATION. HECK, Any city could suffer with that! #dosomethingaboutitnow