After seeing the initial photos, I didn’t think that it would be possible for this stylist to save any of her client’s hair after removing a 9‑month-old weave. A broken arm initially prevented the client from taking her weave out, but it was apparently left it in even after the arm had healed.

Although most of the clients hair had to be cut off, New Jersey stylist Bonita Abakah-Koranteng was able to save a good amount of the woman’s hair. The client’s scalp was treated and she was given a silk press with no added hair. After working her magic, Bonita stressed the importance of proper weave maintenance and knowing when its time to remove your install. She recommends leaving your weave in no longer than 3 months, with proper washing and drying until it’s uninstalled. 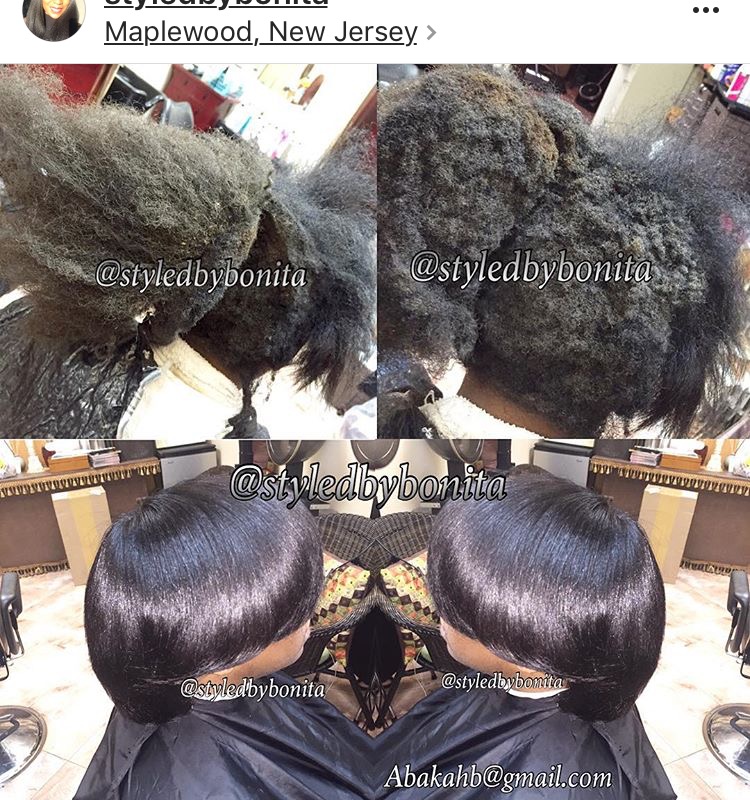 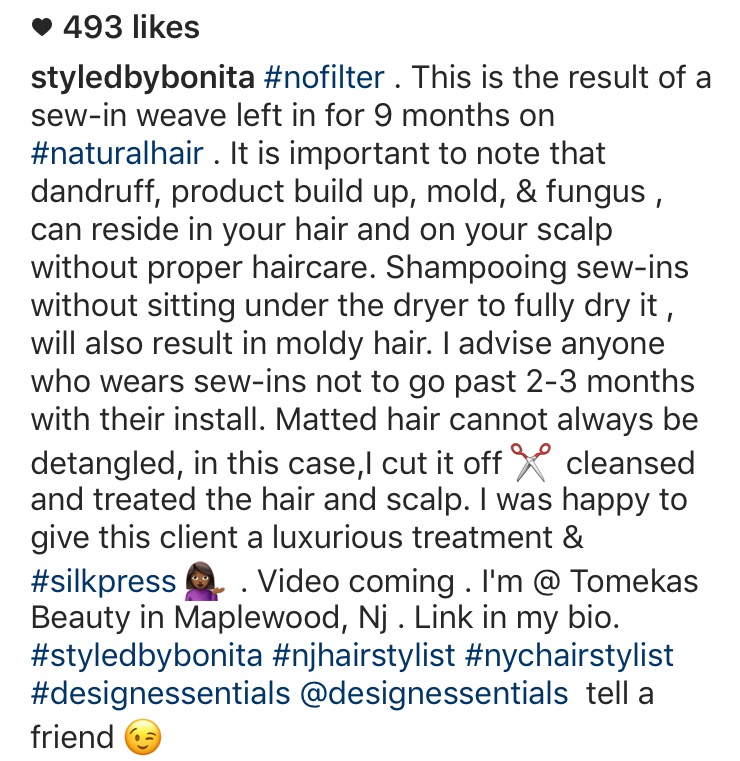 Take a look at her work in action, below.

That was just nasty! How in the hell was her scalp not just one big open sore after 9 months under weave like that? And all that hair she lost; just a damn shame. I have two week old twists with my own hair, and my scalp is MAD at me right now.

That is absolutely disgusting. Did she not care for herself at all? Because basic self care is missing from this whole scenario.

Wow that was disgusting and just pure lack of hygiene. How could that woman walk around like that?? I’ve seen homeless people with better hair. You know her hair had to smell foul too. I would have been too embarrassed to go to a salon and just shaved my head at home. Great job to the stylist.

I would shave it at that point SMH

I’m surprised she was able to save that much hair, probably took more time ’cause she was trying to leave the client with some hair.

Wow, her hair looks great! NEVER go past 3 months with a weave..trust me, two months is pushing it!!!

Its truly revolting how some black women out there walk around with this mold and fungus in their hair. It must stink like something awful. I can’t imagine going a week without washing my hair, let alone 3 months or 9! Even on kids by the 5th day after washing there is a slight whiff that means its time to wash it. Surely people around her, her man, colleagues or the general public could smell it on her, YUCK! Its a huge misconception that not washing natural hair will make it grow. I deep condition and sit under a steamer every weekend.… Read more »

This client had a broken arm.

I’m sure the client had a broken arm and all, but still…she couldn’t have gone to a SALON to get her hair done??? A broken arm is just no excuse, I’m sorry…

Some of the comments are very unkind and insensitive. Apart from a broken arm, this client’s circumstances may be due to something that we have not experienced, homelessness, depression, ill-health etc.

When it comes to fungus I just can’t. Who in their right mind would let it get this bad? In my case I can’t do more then 4 days without my scalp being washed because the salt buildup makes it too itchy so I can’t imagine what her head must have felt like with green sitting underneath. I’m glad it could be fixed but I wonder how many people out there actually have this type of problem.

Same-the most I can go is 2 weeks without washing my hair and I struggle hard lol..I love my hair clean and like to wash my twice every week.
I can’t understand black women who don’t wash their hair frequently and feel no way but the rest of the body is clean and preened to perfection.

It goes without saying that the readers of this article are black! Just stating the obvious.

Is having long hair REALLY that serious?

Her arm was broken the article says, so I think that had something to do with it

Im just visually picturing the bacteria and mold in the follicles of her hair.…just ewwww and the dandruff that falls out of her weave everytime she pats it when its ITCHY.Wasnt it ever itchy????

I’m not a weave/sew-in fan, one of the reasons is hygiene. Even when I’ve worn extensions my hair doesn’t feel like it’s had a proper clean when washed, so I struggle to see how that can be achieved with these things.

Prepared to be enlightened.

.….why would you leave a weave in that long…? Well anyway the stylist is awesome her hair came out beautiful.

I’m surprised she had ANY hair left on her head. This is the baddest stylist I’ve EVER seen in my life. To take molded, jacked up hair like that and then do what she did? She’s the BADDEST stylist on this earth! She did an excellent job!

Short of doing a TWA or one inch style, the stylist rocked it!

Usually in situations like this wherer people leave their weave in for so long is a case of mental illness. People with conditions such as depression sometimes have a hard time caring for themselves (only SOME people though)

Perhaps, it’s usually do to lack of making time and education on how long to let the weave stay in two or three months MAX ..illness…i.e. broken arm… lack of time, and lack of money is usually the key reasons.

You just described me. Although, I don’t have a weave, I haven’t taken care of my natural hair at all. It isn’t growing and I’m just making myself more self-concious, but I can’t seem to help myself. My Mum’s given up. I’m 15

With any management of natural hair, whether cleansing, prepping or styling, you have to take it one section at a time. Maybe one small improvement can boost your confidence. I’m trying to come back from a year of stagnant growth and hair loss. You can do it.

I would lovvvve to know how much the stylist charged her for this. I would’ve told her $499 starting for a “health and safety” fee…

This is Bonita , the stylist , Thankyou! It wasn’t a rough process but a blessing in disguise.

This client had a broken arm, please be careful when commenting.

Even with a broken arm though, the client couldn’t have gone to a SALON to get her hair maintained/styled in 9 months?? 🙁

Anyway, glad the stylist was able to save some of her hair. She worked miracles. Seriously…

I saw the title and choked on my own breath.