[Pics] Cowgirls of Color: Stunning Images of One of the Country’s Only All-Black-Woman Rodeo Teams

Cattle herding has been a fixture of black culture in both Africa and America, although it is often excluded from the history books. Black historian Bennie McRae, Jr discusses this rich history in his book Lest We Forget;

“Almost totally missing from the traditional history of the American West is the role of the Black cowboy as well as other Black pioneers who traveled through and settled during the nineteenth century in the vast territory west of the Mississippi River that extended from the Rio Grande along the Mexico border northward to the Canadian border. Why was the Black cowboy overlooked? The answer is obvious. A deliberate exclusion by the historians, writers, artists, and photographers who apparently felt that certain ethnic groups were unworthy of being recorded in the history books despite their participation and contribution. The exclusion was extended into the twentieth century by the Hollywood producers (documentary and movies) who not only excluded them, but slanted and twisted the facts regarding the overall western scene…

The history of the Black cowboys began long before the establishment of large ranches with cattle grazing in the late nineteenth century. Gambia and some other African countries were known to be lands of large cattle herds with the natives possessing innate skills in controlling and managing the movement of the animals. They were not called cowboys at that time, but merely herders.

Throughout the slave trade, ranchers and farmers (slaveowners) with large herds of cattle in the lower south were attracted to this particular groups that had been captured in those African countries…

Of the estimated 35,000 cowboys that worked the ranches and rode the trails, between five and nine thousand or more was said to have been Black. They participated in almost all of the drives northward, and was assigned to every job except that of trail boss. One historian noted that there had been a few cattle drives where the entire crews were black except for the trail boss.”

Four black women are reclaiming this heritage with one of the country’s only all-black-woman rodeo teams. In a sport dominated by white men the Cowgirls of Color, consisting of Selina “Pennie” Brown, Sandra “Pinky” Dorsey, Kisha “KB” Bowles and Brittaney Logan, compete primarily on the African American rodeo circuit, with hopes of breaking into larger scale competitions. Formed just two years ago, the team competes in events including the barrel relay and steer undecorating, but most of the members are entirely new to the sport. Dorsey is the only member to have competed in rodeo events as a girl. Still the women are set on winning events and the prize money that comes with it.

The Guardian profiled these incredible women in a November photo series. Check it out (All captions and photos from The Guardian.) 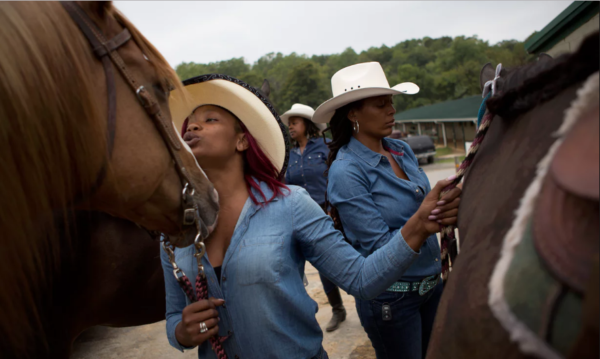 Pinky, Pennie (in background) and KB calm their horses before riding in the grand entry. Photograph: M Holden Warren 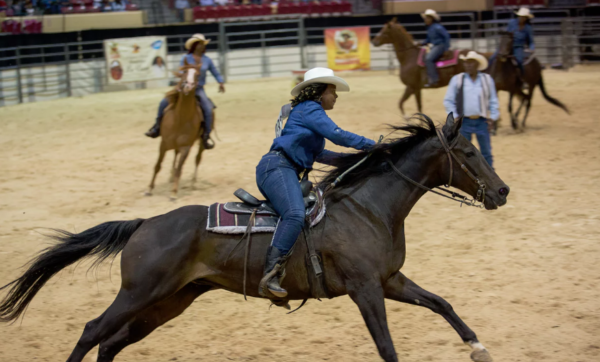 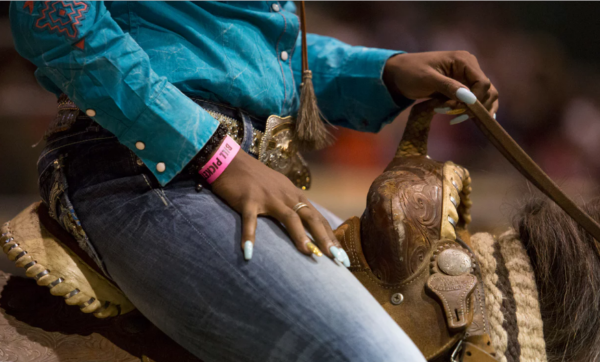 Only one member of the Cowgirls of Color competed in rodeo events as a teenager. “I was the only black person there,” she says. Photograph: M Holden Warren 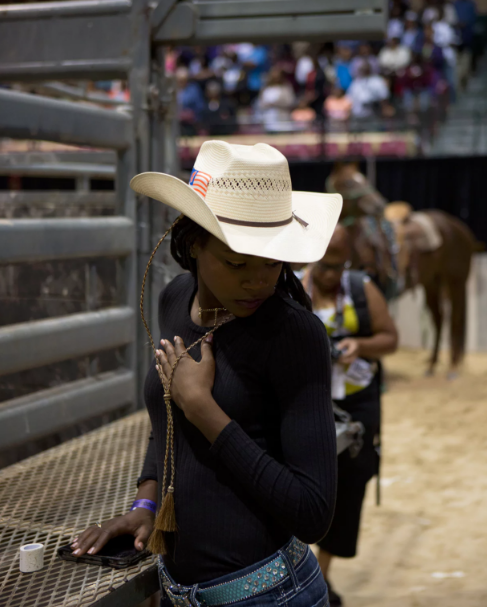 ‘In my community, so many people don’t believe that women ride. Not just women, but black women.’ Photograph: M Holden Warren 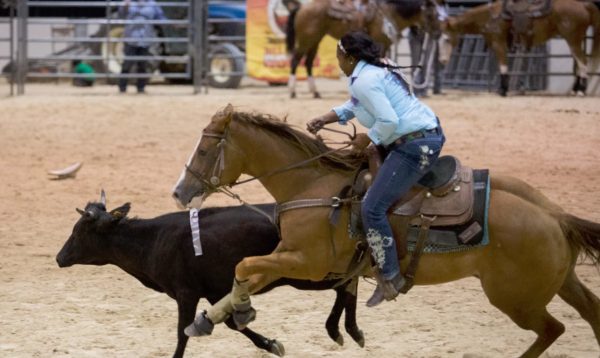 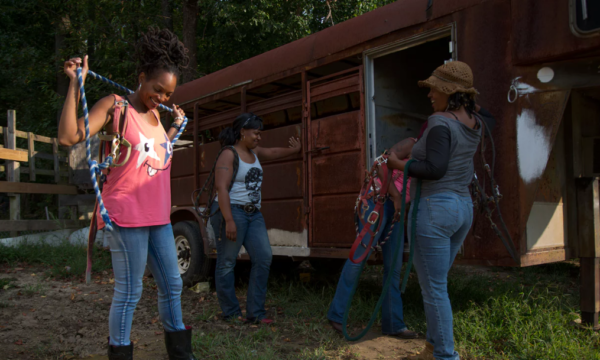 KB, Brittaney, and Pennie pack up their trailers on the morning of the Bill Pickett invitational rodeo
Photograph: M Holden Warren 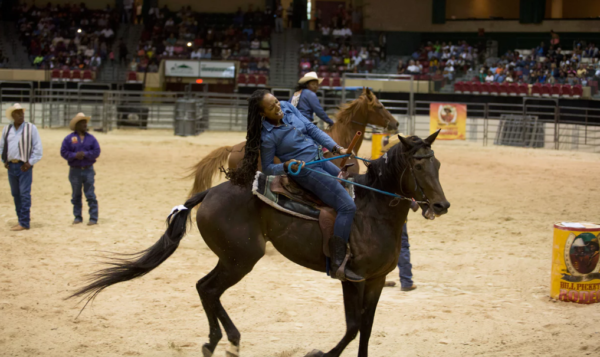 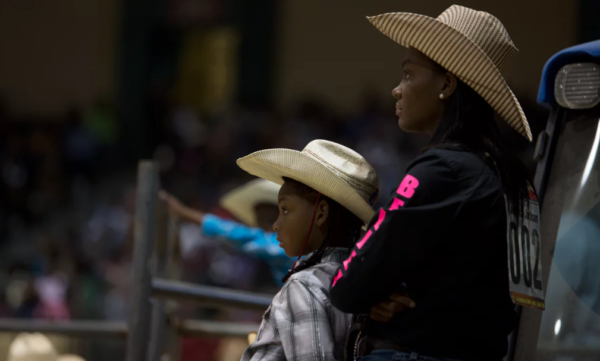 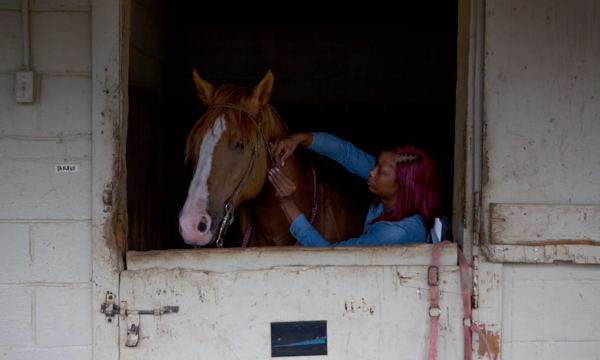 Incredible. You can read the full feature on the Cowgirls of Color here.

Do they only allow black women? Isn’t that racist? #sarcasm Just a pre-emptive strike before the #AllLivesMatter folks show up.

Super cool! I love it. More stories like this please.

We need a documentary on this!

So great seeing women of color in roles outside of the stereotypical ones portrayed in mainstream media. As a Black woman, I’ve never even seen a Black woman in rodeo, I never even imagined it as a welcoming space for us. Love this story, keep breaking boundaries! #BlackGirMagic

Lots of women of color in rodeos. Usually in the south. I love this is an all female one!!

This is so cool! Personally, I’m the only Black woman I know who rides horses. This does my heart good Wish I was younger. I’d try to join.

YES!! As a lover of history, I’m ecstatic to learn more about black cowgirls! I will definitely check out the Bill Pickett Rodeo circuit as one of my things to do within the next two years. This is a worthy organization to support. Reading about black cowboys and pioneers settling the West is barely acknowledged in the history books, and it’s up to us to bring the truth to the forefront. Cowgirls of Color are part of history. YOU GO COWGIRLS OF COLOR! I’m adding horseback riding to my list of things to learn next summer! Thank you BGLH for… Read more »

Hi there!
I am creative directing a documentary about African American cowgirls in 2017. Can someone point me in the right direction of how I can get in contact with Kanesha Jackson or some other cowgirls you love that would like to have their portrait shot to be in an art exhibition? We are trying to showcase not just color here, but strong female images for women; and what an image it is… to see a black cowgirl competing along side males. 🙂 Nadine Ijewere http://www.nadineijewere.co.uk will be shooting our doc and portraits. Thanks for the help!